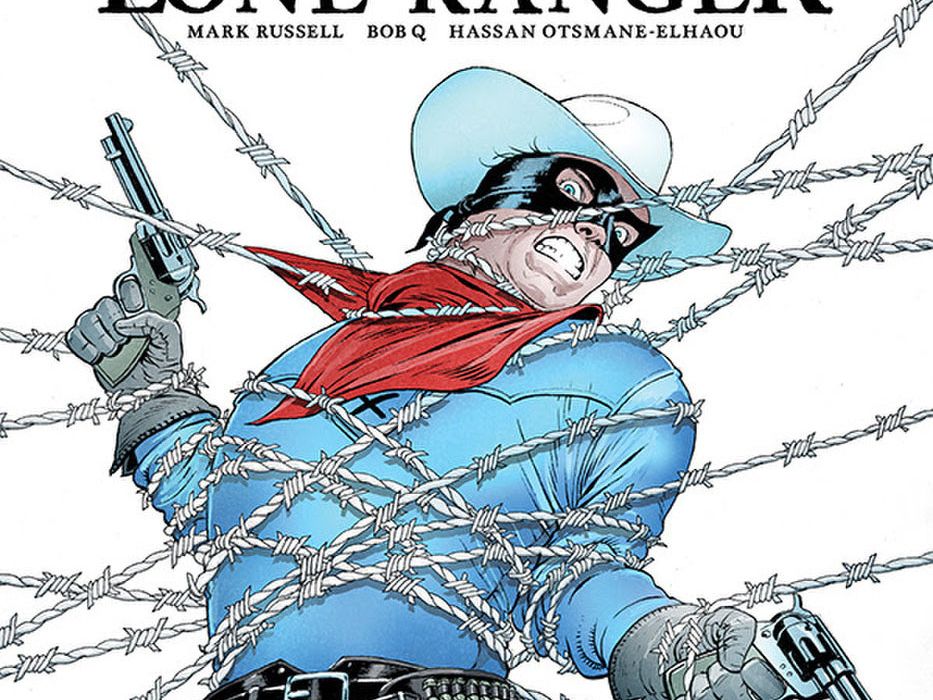 Mark Russell has carved out a niche for himself taking classic properties, turning them on their heads, and using them as a vehicle for biting social commentary through his work on books like “The Flintstones” and “Exit Stage Left: The Snagglepuss Chronicles.” His next project is a five-issue “Lone Ranger” series for Dynamite. He’s joined by Bob Q (“James Bond: Origin,” “The Green Hornet ’66 Meets the Spirit”) on art and it’s lettered by Hassan Otsmane-Elhaou. We talked with Russell on how he approaches these types of series and what he’s looking forward to with “Lone Ranger” in particular.

“Lone Ranger” #1 releases on October 3, 2018. Be sure to check out some exclusive artwork from the first issue after the interview below. 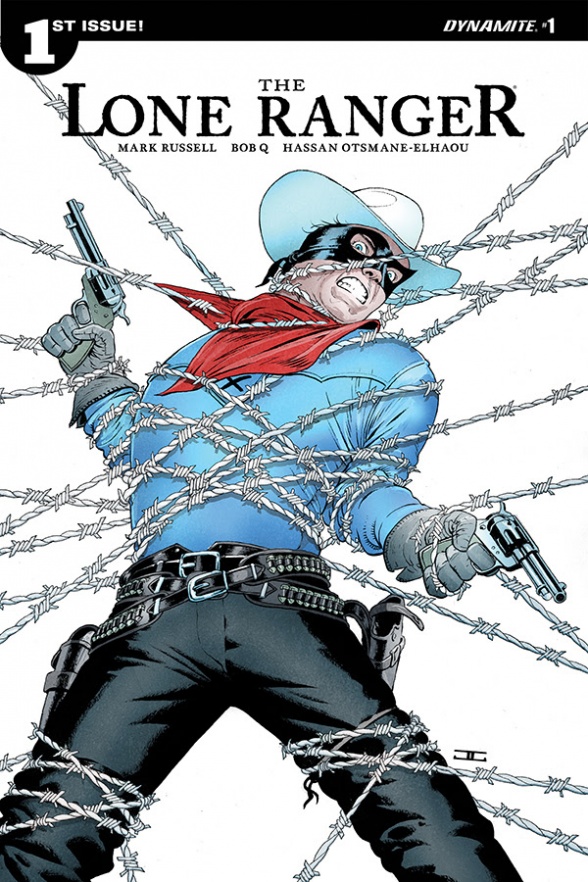 You have said in past interviews that you didn’t necessarily have a strong affinity for licensed properties that you’ve worked on, so there weren’t any hang-ups taking the characters in interesting directions. Is it the same dynamic for Lone Ranger? Or do you have more of a connection with the character?

Mark Russell: It’s pretty much the same dynamic, which is best both for me as a writer and the Lone Ranger as a character. As a writer, the worst thing I think you can do is to approach a character like it’s the dad of your prom date. You know, full of nervous respect and trying really hard not to blow it. I prefer to approach characters, especially licensed characters that existed long before I got to them, like the friend of a friend you met on a road trip. You can loosen up and be yourself and maybe even be a little crazier than you normally are because it’s a once in a lifetime situation and you may never see this person again. So if you embarrass yourself, it’s not the end of the world. And if you hit it off, everyone’s going to have way more fun.

Did you do any kind of preparation or research before sitting down to write the series? What’s your process when starting a new book?

MH: I figure out what it is I really want to talk about and what I want the characters to be like and then I work out the story based on what the characters are and what the world is that I’ve dropped them into. When I’m writing something based on history like this story, most of my research is just figuring out how to make the story work in that time period. I’m not a stickler for historical accuracy, even though if you show the telegraph in a story set in 1843, SOMEBODY will point out that it wasn’t invented until 1844. I don’t strive for 100% accuracy, I just want the world to be plausible and not distract the reader with, you know, the Lone Ranger talking on a cell phone or something.

You’ve done several limited-series now. How do you approach a more finite story differently than a more sprawling ongoing?

MH: I typically like limited series because it allows me to swoop in and tell a story and get out before either the series gets canceled or just sort of peters out. I like to write with a definitive ending in mind, even when writing an ongoing series, but a longer ongoing series allows you to create more of an ensemble cast of characters and tell a more complex narrative, so you pace yourself accordingly.

Most of your work has shined a light on aspects of our current culture through the lens of the various properties you’re working with. What does Lone Ranger allow you to do that’s different from what you’ve worked with in the past?

MH: Besides the fact that it lets me work with the Old West, which is a rarity in comics, it lets me talk about our present by talking about our not-so-distant past. Create a world in which our own world is recognizable as a natural extension of the world I’m writing about. I suppose I did the same thing with The Flintstones, but it was such a distant lens (taking place in Bedrock, the world’s first civilization) that, to make it germane to our world, I had to talk about really fundamental concepts like marriage, agriculture, or division of labor. “The Lone Ranger” is set close enough to our time that it gives me room to talk about more nuanced variations of these concepts and in a recognizably modern way.

What inspired you to choose the invention of barbed wire as a catalyst for the themes and story in “Lone Ranger?”

MH: It’s the sort of device I love because it’s such a little, seemingly insignificant thing, but it had a massive impact on our way of life. It all but single-handedly destroyed the most iconic image of our national mythology… the cowboy driving a herd of cattle across the prairie. A story about barbed wire is a story about the West destroying the West, in much the same way that our nation’s conservative political and economic institutions fetishize our traditional values of independence and freedom in order to sell us on ideas that are ultimately ruinous to our personal freedom and independence.

Now having a few comic series under your belt, how has your collaboration developed? Is Bob Q working off a full script, or a little more back and forth?

MH: I send him a full script, but he will take it and run his own direction with it. This is as much a product of Bob Q’s creativity as it is mine, and I love to see what he comes up with. He’s so great at coming up with these kinetic scenes full of energy and life.

Dynamite is big on crossovers, both with their own properties and other publishers. Are there any characters you would like to see cross paths with the Lone Ranger at some point?

MH: Wow. I hadn’t even remotely considered that as a possibility until this very moment. But the first thing that popped into my head was Henry Jones Sr (Indiana Jones’ dad). Now that you mention it, I could totally see that happening. 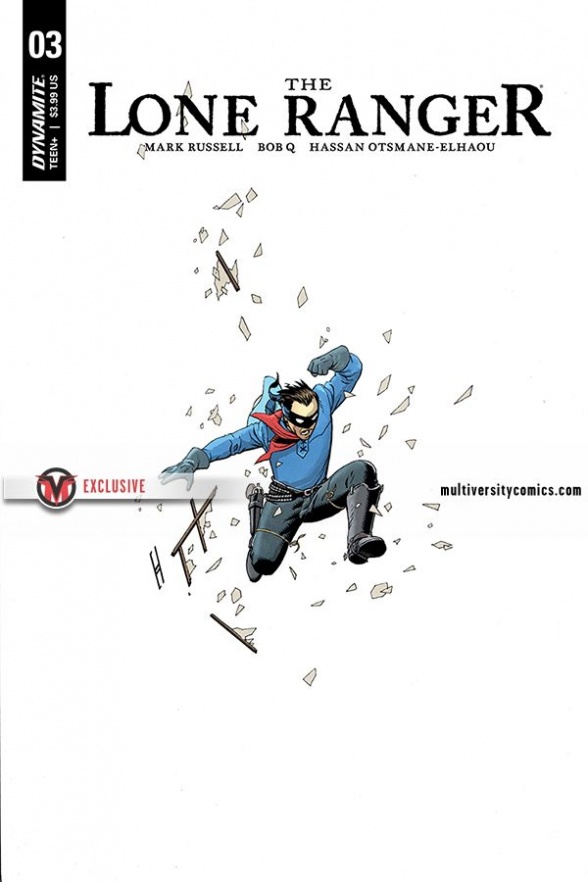 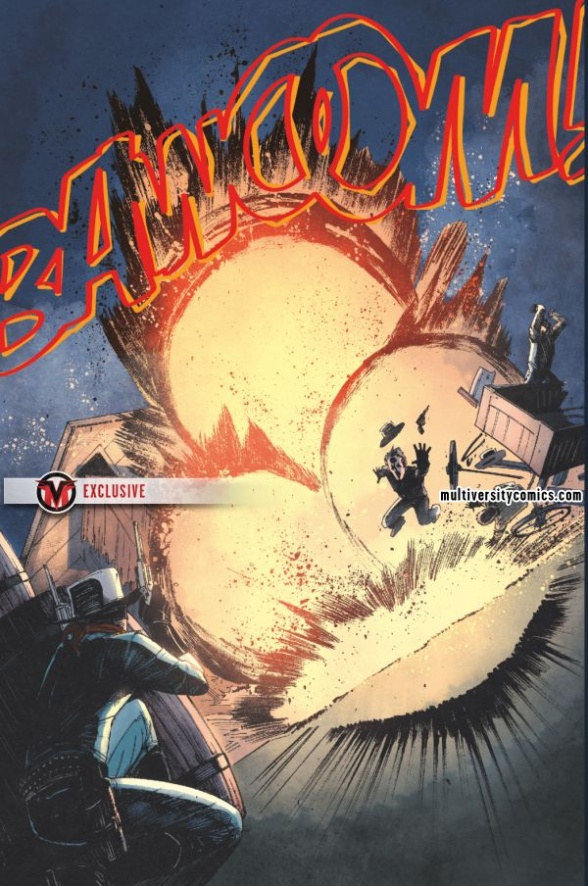 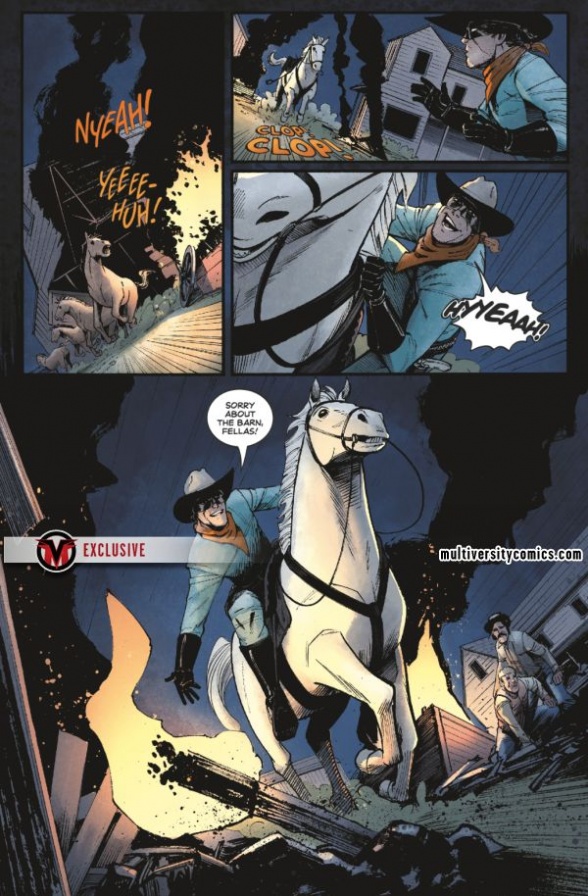