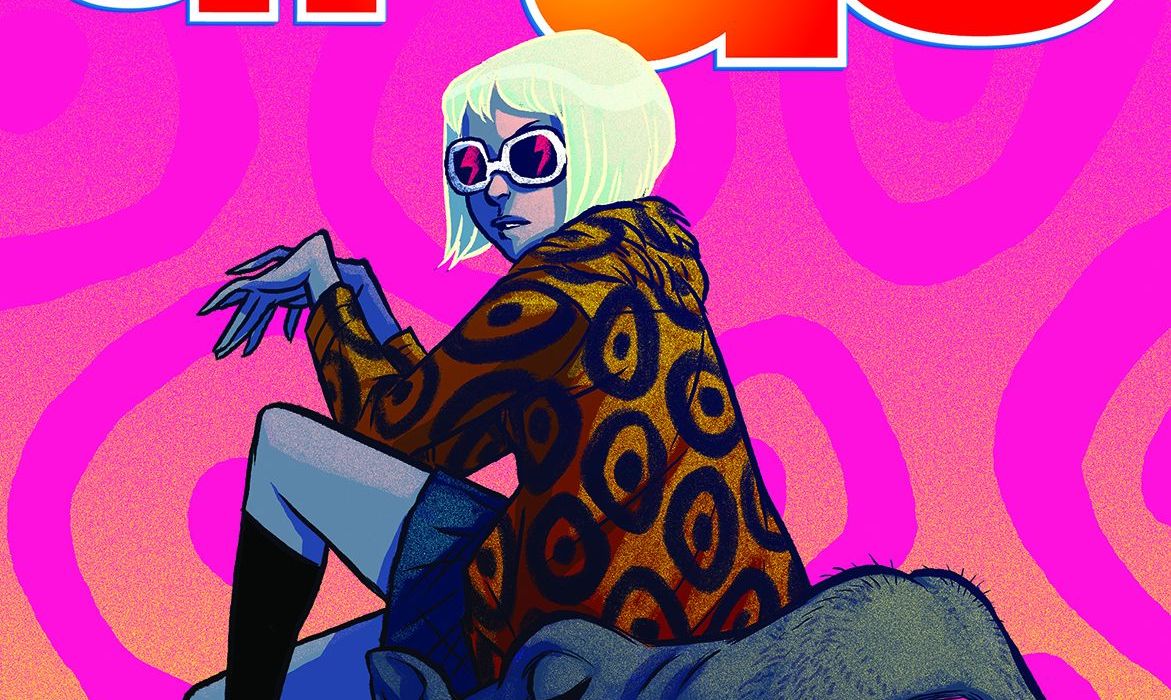 Next week marks the release of “Doom Patrol #1” and readers first look at the Young Animal imprint from DC and creator Gerard Way. With the announcement of the Young Animal imprint came the announcement of books such as “Doom Patrol,” “Cave Carson Has A Cybernetic Eye,” “Mother Panic,” and “Shade, The Changing Girl.” From writer Cecil Castellucci, artist Marley Zarcone, and colorist Kelly Fitzpatrick, “Shade, The Changing Girl” follows Loma from the planet Meta who finds herself possession of Rac Shade ( Shade, The Changing Man) ‘s madness coat and also an inhabitant the body of earth girl Megan Boyer.

The first issue dropping October 5th will also include a back-up story co-written by Gilbert Hernandez and his 16-year-old daughter Natalia, who will also is doing the pencils. To learn more about the series we were able to talk to Marley Zarcone about her art for the book, their place in the DCU, and telling the story of an alien in a teenage girl’s body. This Monday, September 12th will mark the final order cutoff for you to pre-order “Shade, The Changing Girl.” Below you can find our interview with Marley and a three page preview of the series. Make sure to pre-order the series and look for “Shade, The Changing Girl” in shops and online this October 5th.

We also have three exclusive pages to share – but not for long, as they’ll be released wide later today – so enjoy!

Hey Marley, thanks for taking the time to talk about the new series. The announcement of the Young Animal imprint was pretty exciting news. When they announced the creators involved it was crazy to think of all of you extremely talented creators working on these titles and with these characters. How did you become involved on “Shade The Changing Girl?”

Marley Zarcone: Shelly Bond brought me in on this project. It was definitely exciting! We worked together at Vertigo many times before, and she thought this book would be a great fit. She introduced me to Gerard, and Cecil (Castellucci) and it took off from there. I actually hadn’t worked with Cecil before, but Shelly knew we would be a good team. Thanks to her, I’m on a great book and Cecil and I are in complete nerd synch.

With the growing hype and excitement around the imprint and your book how has that been for you? Has there been added pressure as you have worked are the book more?

MZ: I’m absolutely feeling some pressure, but I wouldn’t blame it on the hype around the title. The fact that many of my comic heroes worked on “Shade the Changing Man” is more to blame. Chris Bachalo was an absolute game changer for teenage me! Total formative influence. So yeah, definitely don’t want to disappoint.

What has been your approach for the style and tone of the series? Has it differed a lot from your previous work from series like “Effigy” or “Forgetless?”

MZ: There are probably some elements from both of those series in this comic, but Shade is definitely a fresh experience for me. There have been many more opportunities to expand my storytelling horizons! Not that “Effigy” or “Forgetless” had rigid parameters, but illustrating madness can open things up in unexpected ways!

Working kind of on the fringe of the DCU do you as a creative team have a lot of freedom when it comes to your own series and the direction you want to take it?

MZ: We’ve had a lot of freedom on this series! There’s been great support and communication between everyone involved. I know that sounds cheesy, but it’s really how this project is running. Cecil, Kelly and I even run a pinterest board for Shade inspiration.

What is the creative process like with Cecil? I have always been a fan of your layouts and panel work, do you have a lot of flexibility as a team in your creation of the art?

MZ: Thanks! Interiors are a team effort, but I definitely have a strong input when it comes to layouts. Doing layouts is my favorite step in comic creation!

With elements of Rac Shade looming in the book have you done research into previous series for your art? What have your brought to the mantle of Shade as an artist?

MZ: Absolutely loved the Vertigo series, so it was more of a refresher! Digging through longboxes for back issues, and whatnot. Brendan McCarthy’s interiors for issue 22 is something every comic fan should experience.

I think my style of storytelling will be a unique contribution to the Shade mantle. Also the bad ass faux fur collared madness jacket!

Having Loma inhabit Megan’s body sounds like an added challenge visually as a storyteller to display and emote her unique experiences. How has that element been as an artist?

MZ: Actually, I found that aspect to be a lot of fun, especially considering Loma’s species isn’t humanoid. Definitely keeping in mind her awkwardness with wearing a teenage human skin suit.

What do you hope readers experience when reading the first issue of “Shade The Changing Girl?”

MZ: Really hope the readers feel how much love all of us have put into these issues. This is one of the best experiences I’ve had working on a comic book, and I want that energy and excitement to shine through. 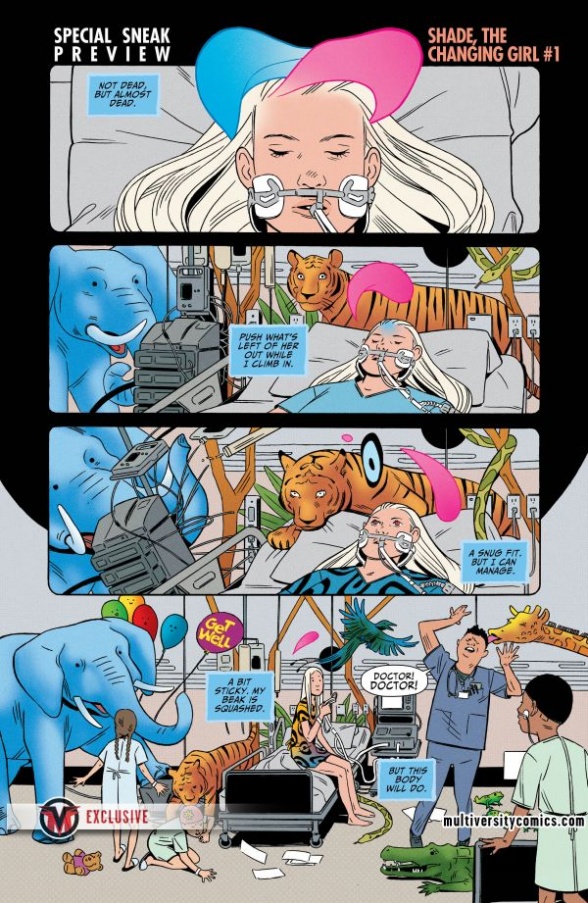 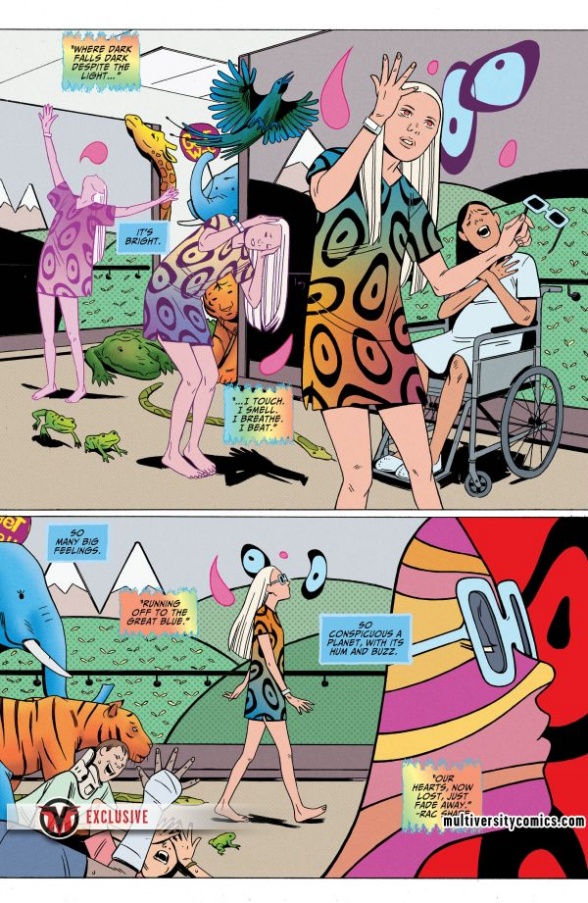 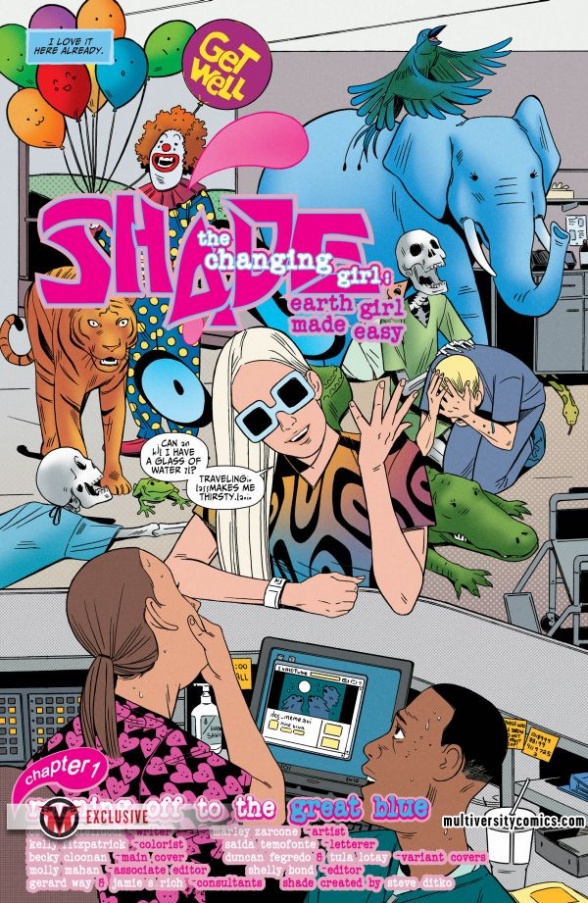