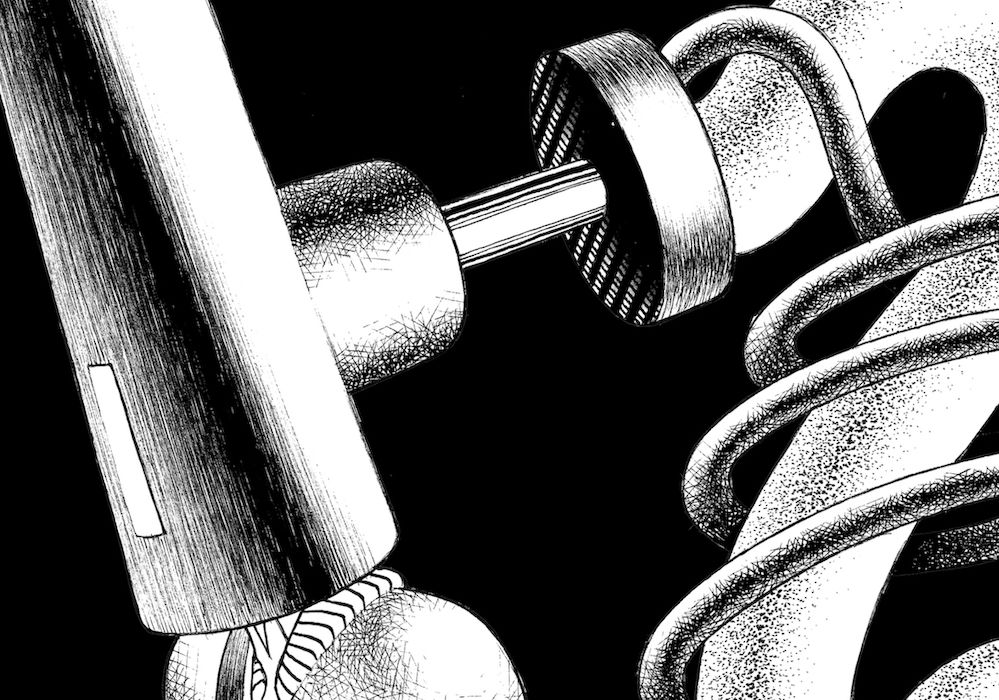 As we inch closer to the holiday season we are reminded how important family is. Whether they maybe be our immediate family or our found family made up of an assorted group of oddball outcasts we met across a sci-fi/ post apocalyptic wasteland.

Eisner-nominated creator Matt Lesniewski new comic “Faceless and the Family” focuses on just that. “A small group of outcasts from different scenarios all on the outskirts of regular society come together over time and form a bond. They never belonged anywhere or have been exiled from normalcy, for their own reasons, and this is how they relate to one another. All the misfits are looking for something; Faceless: a new face so he can reconnect with his loved ones, Giant Jerry: new memories, Carp: a sense of real love and family, Highway Hal: his long lost wife, Jan.”

To bring this story to life Matt is crowd funding the title through Zoop. The campaign is currently more than doubled the goal. We were able recently to speak to Matt to learn more about “Faceless and The Family,” crowd funding comics, and growing as a creator. You can read our discussion below and if you are interested in the “Faceless and The Family” campaign you can check it out here!

The Freak was the first time I came into contact with your work and it’s been amazing to see what you have done since then, working with Matt Kindt and now “Faceless.” What do you see as the biggest change or difference in your work since you released The Freak to now?

Matt Lesniewski: I’d say the art for sure. Even within the same issue of a comic, there have been (what I’d consider) huge advancements. To the point where by the time I’m finishing an issue, I’m already somewhat ashamed of the earlier pages and only proud to show the last few. A big part of that though, is that I’m spending so much time per page, more than the average artist. So a lot of time is passing while on an issue, allowing me more of a chance to improve over the span of twenty-something pages. So book to book, there are big leaps ahead.

A question people might have after seeing the awesome cover to The Faceless is what is this thing possibly about?

ML: It’s actually pretty simple, when thinking about it zoomed way out. It’s essentially a group of misfit characters who all come together over the course of a journey, and form a family-like bond. They connect through their struggles and help each other through them along the story as they each look for one specific thing. So it can be thought of as a unique spin on The Wizard of Oz, but completely it’s own. And that’s really it, if I were to keep it brief. That’s all I really wanted it to be. If you were to zoom in at all, you can start to notice there’s much more there. I’ll leave that a surprise though for the readers.

Having been doing a lot of work with Dark Horse recently. What do you see as the biggest difference in those collaborative projects with publishers and your creator owned solo work and wanting to return to it with this project?

ML: To be honest, I can’t say there’s much of a difference. I’ve been lucky that so far, while working with publishers, I’ve largely been able to do whatever I want. And that’s what I’m doing with my solo stuff. I’m just trying to do my own thing (in both instances) and make the idea/story come to life in the best way I know how. It’s only different in the times I’m working with a writer, in that I’m not figuring everything out myself, but even in that scenario, not much is different.

Obviously focused on a “freak” outcast character and with Faceless you have focused again on a group of people on the fringe of society. What interests you most about exploring that aspect of society in your work?

ML: I don’t know. I guess I naturally just gravitate to that. It’s a general feeling or idea I relate to (at times). Feeling different, or not normal, or whatever. I think we all can on some scale. But I don’t want my work to be about me. That’s not the idea. I was a little apprehensive about going down this road again, because there are similarities, at least in theme, with this book to some of what I’ve already done, but not intentionally. I’ve thought about taking a completely different direction in my next solo thing for that reason. That being said, this is leaps ahead of what I did in the Freak and different enough, that it doesn’t matter.

Most people are familiar with Kickstarter and campaigns to publish books. Why did you choose Zoop for this project and do you see this being a viable alternative for creators?

ML: I had the project turned down by a huge publisher over a year ago. A few months later, an imprint at the same publisher was interested, and an agreement was signed. So I spent the whole year working on this thing. I was already familiar with Zoop, but I met Jordan Plosky (one of the creators of Zoop) at a con and he told me all about it, and asked if I had anything I’d want to crowd fund with the company. With all my time dedicated to Faceless, I didn’t have anything else. Well, one day I opened up an email saying the agreement was no more because the big publisher realized the comic was once turned down, and they didn’t want the way I got my book approved to be a method other creators will try. So they kicked me out. With all that work and time sunk into the book, I decided I’d just do it myself, and I remembered Zoop. I could have went with Kickstarter, but the biggest catch was the fact that they handle all the printing,
fulfillment, and more, so I can continue to work on the book. Drawing the thing takes so much time already. I think it’s definitely another option for creators out there.

Any aspect of the campaign you’re most excited about? (tiers, unlocks, etc)

ML: 3d printed figures! I basically have a little action figure of the main character, Faceless. I was obsessed with action figures as a kid, so to have one available in the campaign of my own, is a dream come true. Never thought I’d have that, but with todays technology, it’s really doable. Also, the original art. The opportunity has pretty much passed at this point ( it was only available the first week of the campaign), but we’re doing a live art auction on youtube for people interested in getting original art from the book. I f we have any left over, I’m sure it’ll be available.

The campaign has been very successful so far. Do you see any more for this story in the future or is this a one and done story?

ML: I wrote it in a way that it works as a complete story, and if I don’t do anymore of it, it works as it’s own book. That being said, I already have more story in mind and have written a ton of notes for where I’d like to continue things. This is really just setting up the family, but there’s still a full story there. So, I’d like to do more, it would just have to make sense business wise. I’ve already spent most of this year doing this and I’m not done drawing it. I’m hoping a publisher will be interested in the first book and will help expose it to a larger audience (maybe even in full color). Even if that doesn’t happen right away, I’d see that as the best possibly avenue to continue this thing.

We are doing this interview mid campaign so you are all ready funded. Is there a point you start to feel good or less nervous during a campaign?

ML: Well, leading up to it, I was really nervous. This is my first crowd funding campaign, so I wasn’t sure what to expect. It was funded on the first day, so that really surprised me. It’s slowed down now though. I’m hoping more people will be interested and hop on board before it’s over. I mostly want more people to read this if possible.

For anyone looking at the project and thinking about backing the book what do you want them to know and why should they?

ML: Like I said, I’ve spent a ton of time on this, not doing anything else for money under the belief it would be coming out on a big publisher and I’d make money that way, down the road. But the carpet was pulled from under me midway and had to figure something else out. This is my only job. And just in case it isn’t obvious, the number people see, isn’t’ going right into my pocket, not even close. Most of that goes to printing, making the different rewards, and splitting it up with people helping with the campaign. Oh, and taxes. So it would be nice to get more people on board. I’m not looking for sympathy, just being transparent. I’m grateful for all the support I’ve gotten so far, but I could use more. Please, go and support the book. I’ve put everything into it, and this is my best work yet. I’d really appreciate it. And, thank you again for helping me out and doing this interview. It helps me get the word out.