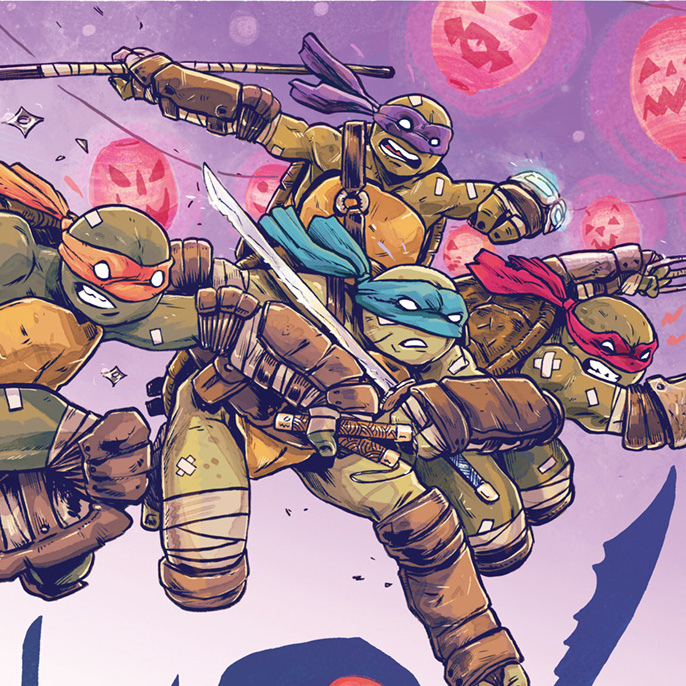 One of the constants in the world of comics has been “Teenage Mutant Ninja Turtles.” For a lot of fans it is something they have known most or all of their lives. Since the IDW relaunch in 2011, another constant has been the amazing stable of artists who have had their time on the series. For issues 53 to 55 it was artists Michael Dialynas’ time. Artist and co-creator of acclaimed Boom! series The Woods, this was not only Michael’s first time drawing a TMNT issue, but also the realization of a life long goal.

I was able to talk to Michael about his relationship with TMNT, the change in approach from The Woods to Turtles, and what he brought to Turtles in his arc on the series. A huge thanks to Michael for taking the time to talk about his work and the series. All 3 issues of Michael’s Turtles issues are available in stores and online now! 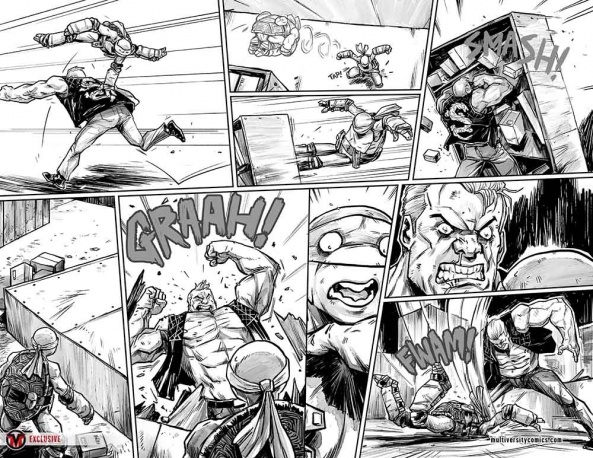 The great thing about the IDW turtles line to me has been everyone who has worked on the series seems to really love and be huge fans of the turtles. What is your relationship with Turtles and how has it been contributing now to their history?

Michael Dialynas: I’ve been a Turtle fan ever since 1990, I was 6 when the first movie came out and it was Turtle-mania everywhere, I was sucked in BAD.
I had action figures, bandannas, t-shirts, i would draw them all day long and since i lived in London back then i read the Teenage Mutant HERO Turtles (cause of the word Ninja being banned) which was the Archie comics with the intergalactic wrestling every two weeks from the news stand.
I’ve been a fan ever since.

I finished drawing my final issue last month and it still hasn’t sunk in that i contributed to the TMNT lore but the experience has been great. The amount of fans that have gone out of their way to say nice things to me has been great. In fact after the announcement i was at NYCC and i met a few of them there and they all gave me lovely gifts for being on the series and cause they found out it was my birthday then.

Plus just last week I was at LSCC in London and a 6 year-old boy came up to my table with his dad and handed me a sketch he did of Bebop which was very reminiscent of a Bebop sketch i did when I was his age, that may have been one of the best highlights I’ve had drawing comics. I hope he becomes a TMNT artist in 20 years too!

Did you have to alter your style or normal process for an issue for Turtles compared to something like The Woods? Do you have to set a different mood to work on an issue of Turtles?

MD: Not that much cause I have a habit of altering my style either way to fit the style the story needs. When i did an Adventure Time story a couple of years back i drew it in a way that it was mine but also super cartoony, the same now with the Gotham Academy short I just finished last weeks.
I try to play to the strengths of the story as much as i can.

Process wise not much changed but i did listen to a LOT of T.U.R.T.L.E POWER on repeat and have the first two movies and documentary playing in the background 🙂 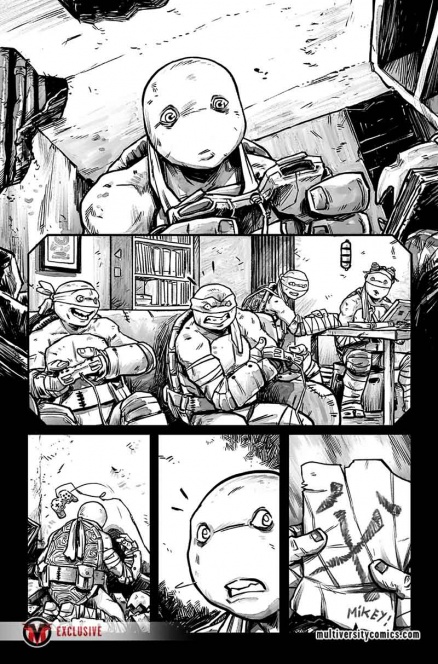 Everyone has their own take and concept to turtles, Mateus’ turtles’ masks have a personality to them with the jagged cuts, others create very noticeable body types for the turtles. What is distinct about your issues and what have you brought to the turtles?

MD: I think my “new” introduction is Mikey’s “I heart NY” button on his belt. Since my arc was all about Mikey I didn’t draw the other Turtles till the end of issue 55. I really like the way the Turtles have been drawn by Sophie Campbell, Mateus Santolouco and Cory Smith so why fix something that isn’t broken? plus I like comics to have some sort of continuity when i’m reading so I stayed in that style-house as much as i could and just added ink wash that I’ve been experimenting with this past year.

Where you caught up/reading the current series when you found out you were doing your issues? Are there any difficulties coming into a series over 50 issues deep  as an artist?

MD: Of course i was reading the series! but i was a few issues behind and hadn’t read the Casey/April and Mutanimals series’. So when the time came I got myself all caught up and started researching every issue from the beginning. I had to stick bookmarks in my issues and tpbs so that i could find the reference i needed and learn how to draw all the Mutanimals from scratch and decode them, Herman was the hardest with his bin-shell, he was hard to fit in a scene with all the other characters. But i did have fun drawing Mondo Gecko and Pigeon Pete! 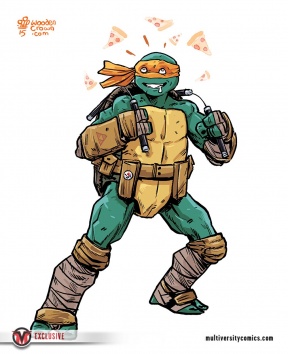 Issue 53 is a great look at Mikey and his mindset after the events of issue 50. As an artist and fan how is tackling a very character driven issue starring a turtle and group of mutant animals? How do you attempt to get emotions across with anthropomorphic characters?

MD: Some of the Mutanimals were hard to tackle in the beginning but i had good reference to pull from especially Andy Kuhn’s work on the mini-series but i gotta say i had a great time drawing Sally and Hob cause i was pulling their emotions from my cats. I used a lot of my giant cat Easy when drawing Hob and the house sassy cat Scampy when drawing Sally.

Every artist I’ve talked to who has worked on TMNT has a different theory but for you when do you make the choice to go to the classic all white eyes?

MD: I really like the way the Nick! series has handled that, when NINJA mode is ON, the eyes go white! so i like that approach.

MD: Oh Donnie! yeah i love that goof!
Tough villain question though… hmmm…. I love Bebop’s design and skull necklace, in fact i like all of his interpretations from the OG cartoon to the new CG beast we will see in the new TMNT movie this summer. I’m actually pretty excited to see him in action and grunt at Mikey!

I think the best thing about your arc was your ability to really convey emotion with Mikey. You really sold the struggle going on inside him. How difficult, is it difficult I guess to get that kind of emotion out of a less featured character like a turtle? Did you have a tricks or approaches?

MD: Mikey was a treat to draw, even though he had fallen on hard times in this arc. Drawing his face, especially in #55 was all about controlling his eyes expressions, that’s why i chose to pull his mask down and have the whole issue with his face exposed, he had returned home for the first time after #50 and I didn’t want it to obscure any of his emotions. I was even considering of removing his belt for that moment but i didn’t want him to have his guard down too much.

Now that your time is done on this arc how does it feel looking back at the issues? What did you learn from your time on TMNT?

MD: One thing is for sure, I really enjoyed drawing those issues and would really like to come back and get more involved with the TMNT universe after I finish drawing The Woods. I would love to draw more of Man Ray and Mondo if possible or even get a crack at doing a Bebop story. 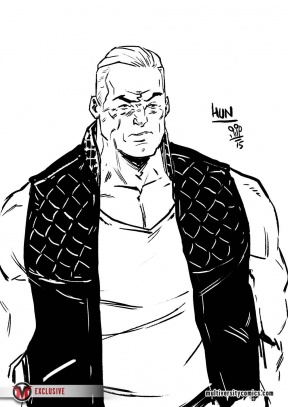 Issue 54 contained a pretty involved fight scene with Mickey, Hun and a few of the Mutanimals. How was it tackling some ninja action? How did you approach laying out the battle?

MD: That part was new for me, I haven’t drawn many fight scenes in the comics I’ve done so getting to tackle a 13 page action sequence was exciting and i did a lot of planning to get the beats right, in my mind i kept thinking of the Raph vs the Foot scene from the 1990 movie. I wanted that feeling to come through when seeing Mikey get his ass handed to him, Hun is a brute! BUT Slash is a BEAST!

You got the cover for the next trade. How fucking cool is that?

MD: Oh man i didn’t expect that! I had a lot of fun with that cover, Mikey looks so happy eating his popcorn but yeah i didn’t expect it was going to be used as the trade cover. My bucket-list has been getting shorter and shorter working with the Turtles!