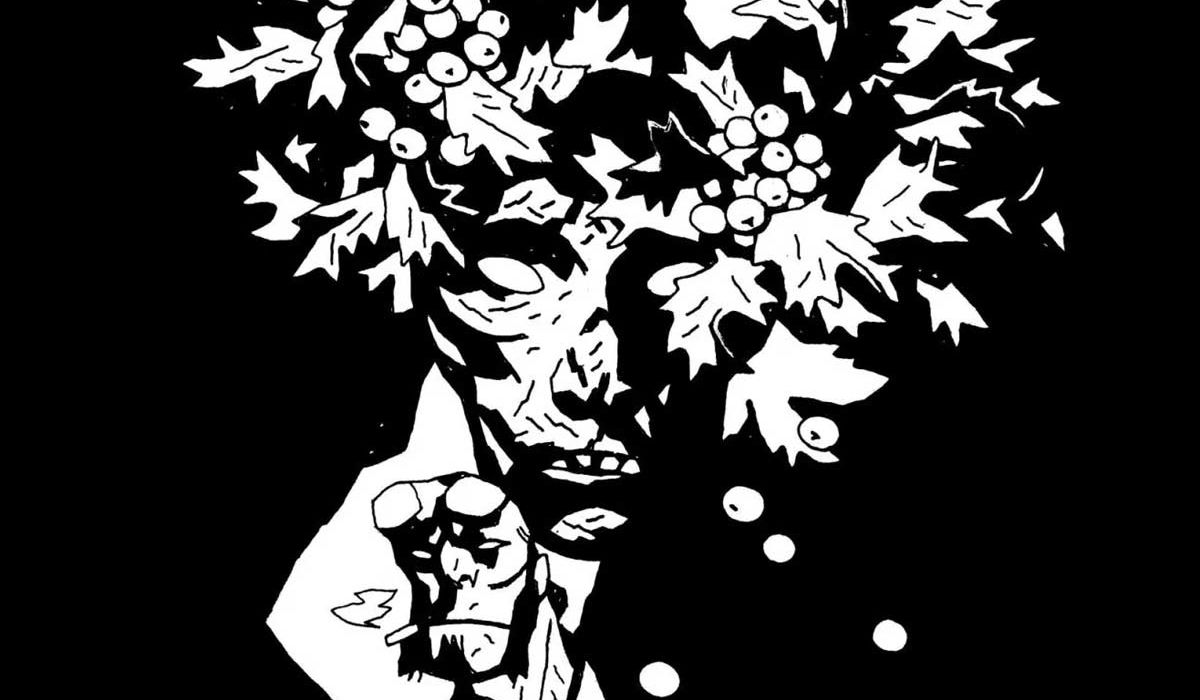 Welcome to Mignolaversity Debrief, our column where we explore the latest stories from Mike Mignola. This time we’re discussing the “Hellboy Winter Special 2019” with editor Katii O’Brien. 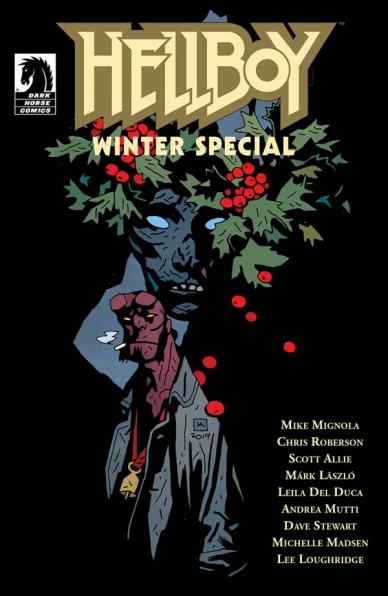 When readers got the first “Hellboy Winter Special” back in 2016, we had no idea it was going to become an annual tradition. Four years later, what a tradition it has become! The winter specials open the door to all kinds of stories that wouldn’t have a home in Mike Mignola’s regular books, like this year’s stories, ‘The Longest Night’ with Sarah Jewell and Marie-Thérèse LaFleur, and ‘The Beast of Ingelheim’ with the Knights of Saint Hagan. What’s your process on these specials as an editor? Since you know it’s something waiting every twelve months like clockwork, how do you guide the three stories to their final shape?

Katii O’Brien: It’s not long after one year’s “Winter Special” goes on sale that we begin talking about the next one. Mike and I will talk about what kind of stories we want to include and it will all go from there. We always have a Hellboy story of course, so it’s a matter of two ideas that will go alongside it: do we want to revisit characters we haven’t seen in awhile, like Simon Anders in ‘Lost Ones’ from 2018? Or sometimes we’ll give a solo story to a character who’s never had their own book, like Sarah Jewell in this year’s ‘The Longest Night.’ Usually by February or March we have the three stories nailed down, creative teams on board, and outlines and scripts in development. Art will start anywhere from late spring to late summer depending on everyone’s schedules, and we’ll get each story colored and lettered as it comes in.

The “Hellboy Winter Special 2018” was full of stories from regular contributors to the Hellboy Universe, but this year all the artists are new to this world. Was that by design or a happy coincidence? 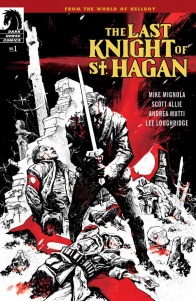 Cover by Sebastián Fiumara
Katii: We’ve worked with quite a few new artists this past year in general, so I think it was mostly us being in that mindset of bringing in new people to see how they handle the characters and stories. Sometimes it goes the other way, and we’ll have an artist hired for a longer project, but the “Winter Special” short ends up popping up sooner, which is the case with Andrea Mutti (who is drawing “The Last Knight of St. Hagan” miniseries coming this spring). He actually drew the first issue of “The Last Knight” before jumping back to do the “Winter Special” short.

Budapest has often been a source of inspiration for Mike Mignola, so it was no surprise he returned to this well for ‘The Miser’s Gift.’ In this case, Budapest is more than just a location for the story—it’s the home of artist Márk László too. I’m curious, was this a story that was written for László? What did he bring to ‘The Miser’s Gift?’

Katii: ‘The Miser’s Gift’ is a fun story that has a particular kind of cleverness and also feels very old and gothic, and Márk’s artwork style just feels so fully illustrative and atmospheric in a way that works so well with that. Mike sent me some of his work to look at awhile ago, and he was someone that we kept in mind as we’ve planned out new Hellboy stories. Mike has a lot of Hellboy stories kicking around in his head, so I think this was a matter of finding the right story for him, and then Mike plotted it out specifically for Márk.

From ‘The Miser’s Gift’
Illustrated by Márk László, colored by Dave Stewart

When the “Hellboy Winter Special 2019” was first announced, I was particularly curious about ‘The Longest Night,’ drawn by Leila del Duca—I’m a fan of her work on “Sleepless” and I wanted to see what she’d bring to the Hellboy Universe. I loved her take on Sarah Jewell, letting some maturity show on her face—after all, Sarah’s been fighting the supernatural for over forty years (I think) at this point. That and del Duca drew a fantastic boogam. How did she get involved in the project?

Katii: Chris Roberson suggested we bring her on to do a Sarah story, and Mike really liked her work, so we planned the best time to slot in a Sarah short and that brought us here. We’ve been so thrilled with Leila’s pages, and we have some more planned with her further down the line. 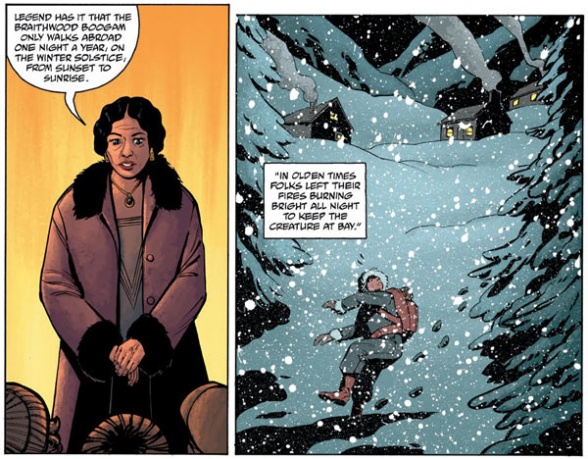 From ‘The Longest Night’
Illustrated by Leila del Duca, colored by Michelle Madsen

‘The Beast of Ingelheim’ belongs to the far reaches of the Hellboy Universe, with only a few connections to other stories and no familiar characters. This is the kind of story that seems uniquely suited to the “Hellboy Winter Special” format. Can you tell us what drove Scott Allie and Mike Mignola to explore such an obscure corner of this universe?

Katii: There are a lot of dusty, dark corners of the Hellboy Universe and this is one, going back more than ten years to their first mention in “Hellboy: In the Chapel of Moloch,” is one that Mike has talked about revisiting for awhile.

From “Hellboy: In the Chapel of Moloch”
Illustrated by Mike Mignola, colored by Dave Stewart

Mike and Scott wanted to show the Knights in action, and give us a story showing that what the Knights dealt with wasn’t just terrifying and gruesome, but also sometimes surprising and heartbreaking. And “The Last Knight of St. Hagan” is actually not the only place where the Knights will be mentioned this year. So check that out when it debuts in April, but keep an eye on the other books as well! 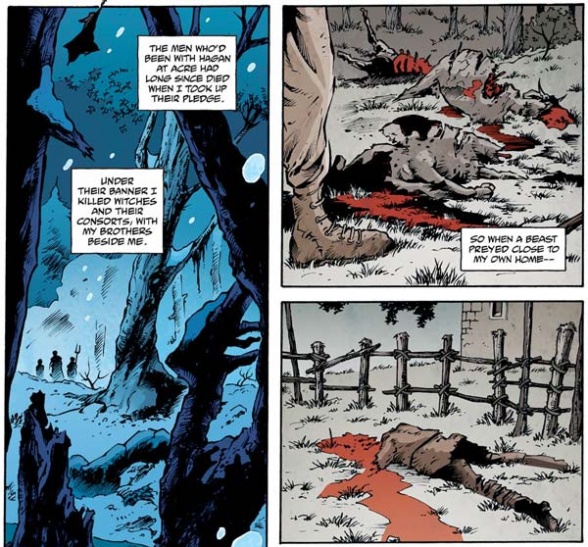 From ‘The Beast of Ingelheim’
Illustrated by Andrea Mutti, colored by Lee Loughridge

“The Last Knight of St. Hagan” #1 comes out April 15. Check back with us later this month for more Mignolaversity Debriefs on “Witchfinder: The Reign of Darkness” #3 and “Frankenstein Undone” #1. You can find Katii O’Brien on Twitter at @KatiiKaBoom. 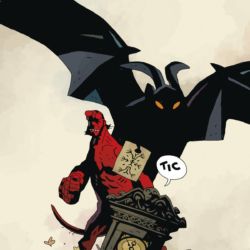 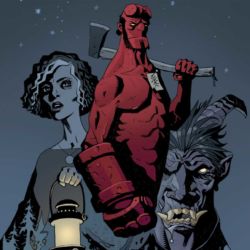