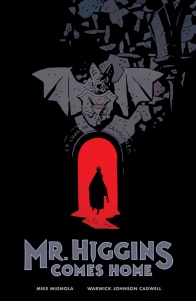 Cover by Mike Mignola
with Dave Stewart
I remember after “Mr. Higgins Comes Home” first hit shelves, you posted a lot of art on your Twitter account. Some of it was design work, some of it was character explorations, but there were also other bits and pieces that seemed like wholly new adventures with Meinhardt and Knox. How soon after you finished “Mr. Higgins Comes Home” did you know that there would be more? Was there even a break for you between the two?

Warwick Johnson-Cadwell: There was always going to be more really. Mike Mignola’s characters had such a presence for me even with very little background and it was easy for me to start imagining where these folk had come from and what they could have been up to. The Professor and Mr. Knox’s adventures were unravelling quite easily while I drew “Mr. Higgins Comes Home.”

Your enthusiasm is palpable. You’ve just finished “Our Encounters with Evil,” yet instead of being weary of drawing the characters, you’ve been drawing them all October for Inktober. It’s been a blast.

Warwick: Thank you. I am so excited about this world and these stories, I love what Mike Mignola introduced me too. It’s been great fun to revisit some of those characters and maybe show a little peep into their own characters a little more.

“Our Encounters with Evil” is a little different from its predecessor. For one, you’ve taken on both writing and art duties this time. What’s it been like for you to take up the writer’s pencil from Mike Mignola? 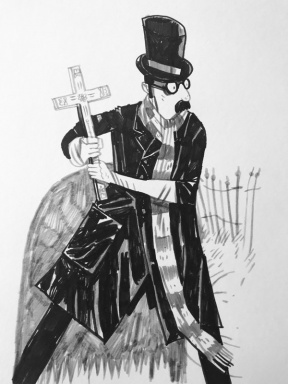 Professor J.T. Meinhardt
Warwick: It’s a thoroughly daunting prospect. It was an incredible experience seeing the story then scripts for “Mr. Higgins” and a treat to work on. I was nervous as to how my work would be received with that book but felt a lot better having Mike’s excellent story there. This time it’s mainly me so I’m nervous about the art and nervous about the story too.

Straight off you’re doing something different. Instead of one big story, “Encounters” is a series of short stories. I found this an excellent way to rapidly expand the world and show off just how much there is to explore.

Warwick: Thank you, that’s very much appreciated. These guys have a world of stories and adventures and I felt the best way to get a window into the variety of their endeavours was to tell few stories together. I liked it too. And there’s enough adventures for more but also to spend time on lengthier stories too.

When you’re short stories like this, did you find it a challenge to give the book an overall shape? How did you put it together and figure out the order of things?

Warwick: That is the tricky bit. These are separate incidents and not connected really. (It’s possible the events in “Mr. Higgins Comes Home” could occur between any of these stories.) But there is a sense to the order. The introductory pages are an homage to Stoker’s Dracula and are firmly attached to the first story. The third story is narrated by another character altogether. These chapters are thought of as journal entries hence the lengthy full title of the book. I liked the idea that they could be retold as fireside tales where the main idea is something that people can elaborate themselves. And as before, I hope the artwork gives them something to return to and review.

The addition of Ms. Mary Van Sloan to the duo was something I very much enjoyed. She brings out a different dynamic. However, from your notes in the sketchbook, she was a late addition. 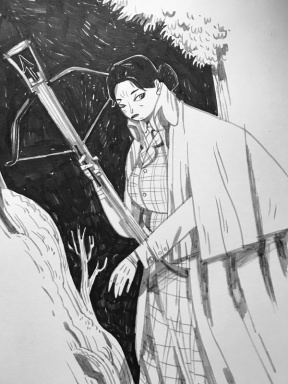 Ms. Mary Van Sloan
Warwick: The world here is beset by the undead in various evil forms, it is unlikely that the Professor and Mr. Knox would be the only people defending us against them so I needed more professionals in that field. (There are a few of them waiting in the wings.) So far the Professor and Mr. Knox have succeeded by circumstance rather than action. They are not a bumbling duo of any sort but tend to be very fortunate. Van Sloan is a much more proactive character. When she appeared I was instantly very keen that she should make our group a trio but her presence would make the events of stories like ‘Siegfried’ (the third encounter) very different. She’ll join our heroes more often in the future if there’s the opportunity. I think she might do well in a story or two by herself.Continued below

I’d enjoy that. It was fun to see her shake things up. Did Mignola have much input as you developed new characters like Van Sloan and expanded the world or were you largely left to your own devices?

Warwick: I was left to my own devices really. I would have happily received any input but also very happy to continue as I was. The only input I did get from Mike was about Van Sloan particularly. We were having a conversation of messages about something or other and I sent an image of her. He liked it and said that he felt a certainty that she should be Scottish. As it was I was hiking the Great Glen Way and standing on the shore of one Scottish loch or the other and thought that would be ideal. 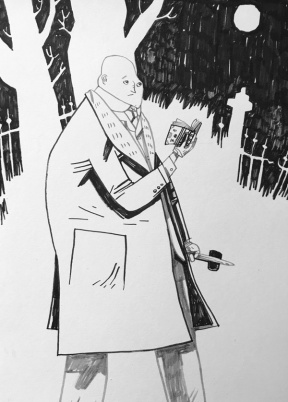 Mr. Knox
You got a lot of visual humor out of “Our Encounters with Evil.” There were even points when I was laughing at scene transitions. That’s the sort of joke I imagine only really happens when the writing and art is coming from the same person. But do you ever have times when the writer and artist sides butt heads?

Warwick: At this time my writer side and artist side are unevenly matched. I need to exercise my writing skills a little more. But that writing comes from a very visual place. Conversations and sequences are thought of visually and even acted out to a certain extent before I decide how to translate it into a script. Which is funny as that script will be returned to artwork. I’m happy to hear that you found the humour too. Mike’s writing has so much in it and with such a light and skillful touch, I hoped to represent humour as well as drama and horror in these stories.

I think it’s safe to say you’ve got more “Adventures of Professor J.T. Meinhardt and His Assistant Mr. Knox” in the works. After all, the epilogue for “Our Encounters with Evil” is certainly teasing more. Do you know yet if the next collection going to be another series of short stories or will it be a single story like “Mr. Higgins Comes Home?”

Warwick: At this stage nothing is certain! I’d love to do more of both sorts. Falconspeare’s story wouldn’t be a short one but I do like the format of telling these little snappy tales.

Before you go, I wanted to quickly talk about your other work. Since “Mr. Higgins Comes Home” came out, we’ve had another project of your see release, Chris Butler’s stop-motion animated film Missing Link from LAIKA. I know these films are made by an army of people, but still, even before the credits (“Character Design and Concept Illustration”), I could see your fingerprints on Missing Link. What was your experience like working for LAIKA?

Warwick: Fabulous, and quite a distant memory. I started with two weeks of character design and struggled to improve on Chris Butler’s excellent design for Susan and Sir Lionel (I was happy to concede) but then began a few months work drawing characters. Unbelievable fun and such a beautiful and exciting film to have worked on.

Finally, is there anything else your working on you’d like to draw our reader’s attention to?

Warwick: One of the great excitements about being an illustrator was this mystique attached to folk who would say “I’ve got this great project but I can’t tell you anything about it”. Having experienced that with these books and four years keeping Missing Link under wraps I now realise it’s incredibly frustrating. There are projects on the go, but nothing I can mention. I am happily self-publishing books too. So “Our Encounters With Evil” is the next big thing for me.

“Our Encounters with Evil: Adventures of Professor J.T. Meinhardt and His Assistant Mr. Knox” is out today. 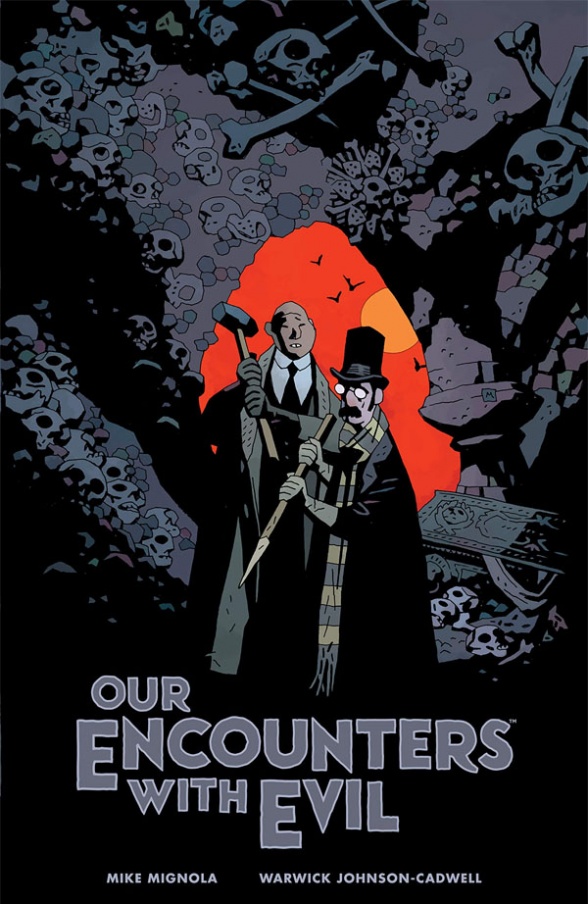 Mr. Higgins was just the beginning! Follow Professor J.T. Meinhardt and Mr. Knox as they continue their pursuit of ne’er-do-well creatures of the night! Backed by the dauntless vampire hunter Ms. Mary Van Sloan, the heroes of Mr. Higgins Comes Home pursue vampires, werewolves, and other horrors that even they are hard-put to name or explain. The only thing that’s for certain is that the strange truths these adventurers uncover are seldom what they seem!

And here’s an excerpt from one of the stories, ‘The Lost Duke of Kurtz.’ 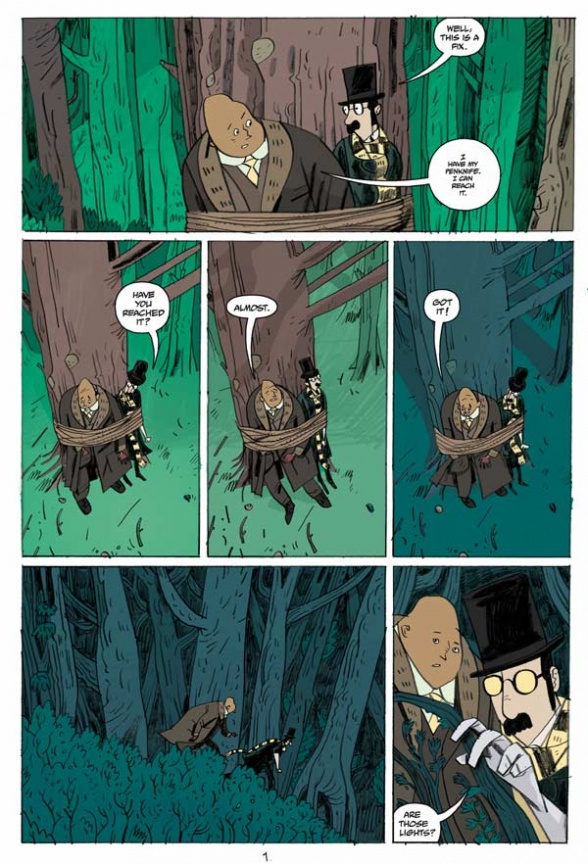 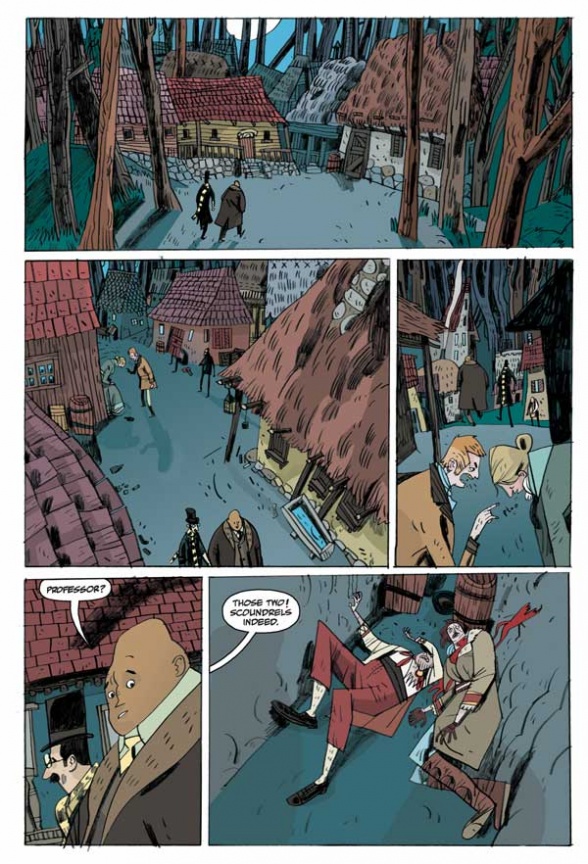 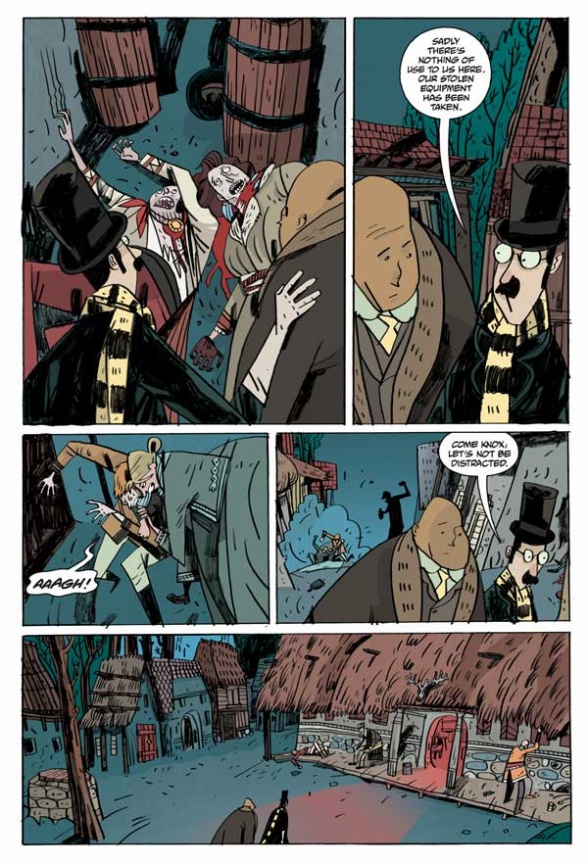 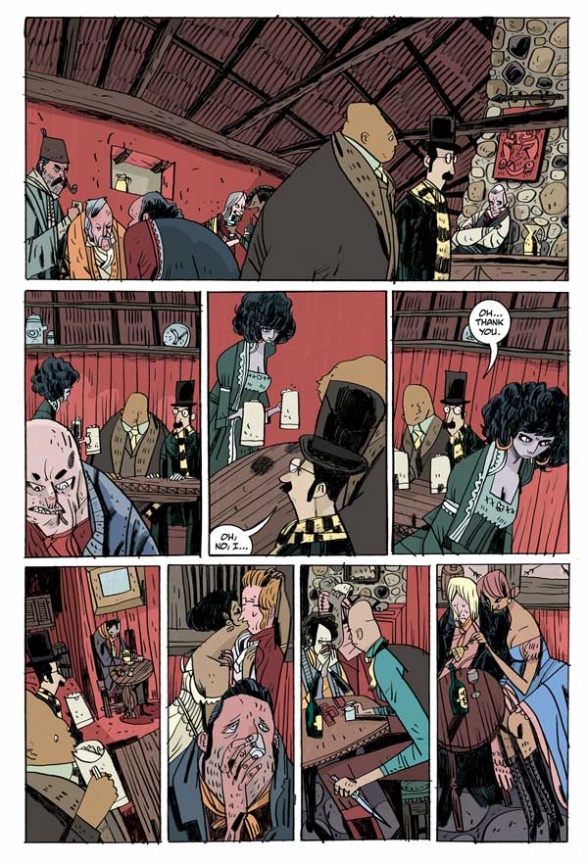 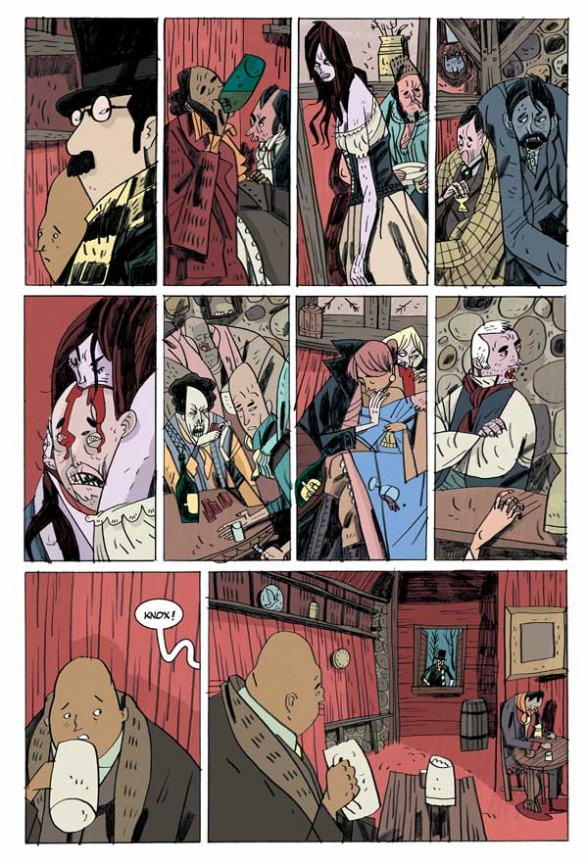 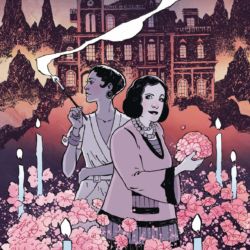 Mignolaversity: “The House of Lost Horizons: A Sarah Jewell Mystery” #1

The Hellboy Universe expands with a new title this week, “The House of Lost Horizons: A Sarah Jewell Mystery.” While the story is indeed designed to be a standalone tale and completely new-reader friendly, it’s also laying the groundwork for much more to come. . .Written by Mike Mignola and Chris RobersonIllustrated by Leila del […] 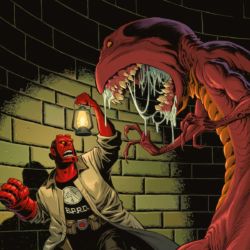 Welcome to Mignolaversity, Multiversity Comics’ dedicated column for all things Mike Mignola. It’s a new month and that means new solicitations. This time we’re looking ahead to August. As always, thanks to Dark Horse comics for this early sneak peek.THE GOLEM WALKS AMONG US! #1 (of 2)Written by Mike Mignola and Christopher GoldenIllustrated by Peter […] 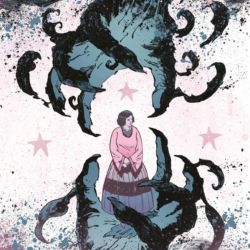 Hell Notes: Who the Hell Is Sarah Jewell?

Welcome to Hell Notes, Multiversity Comics’ annotation column for the Hellboy Universe. This Wednesday a new miniseries launches, “The House of Lost Horizons: A Sarah Jewell Mystery.” Sounds good, but if you haven’t been reading all the numerous titles in the Hellboy Universe, you may be wondering Who the hell is Sarah Jewell?Well, don’t worry. […]