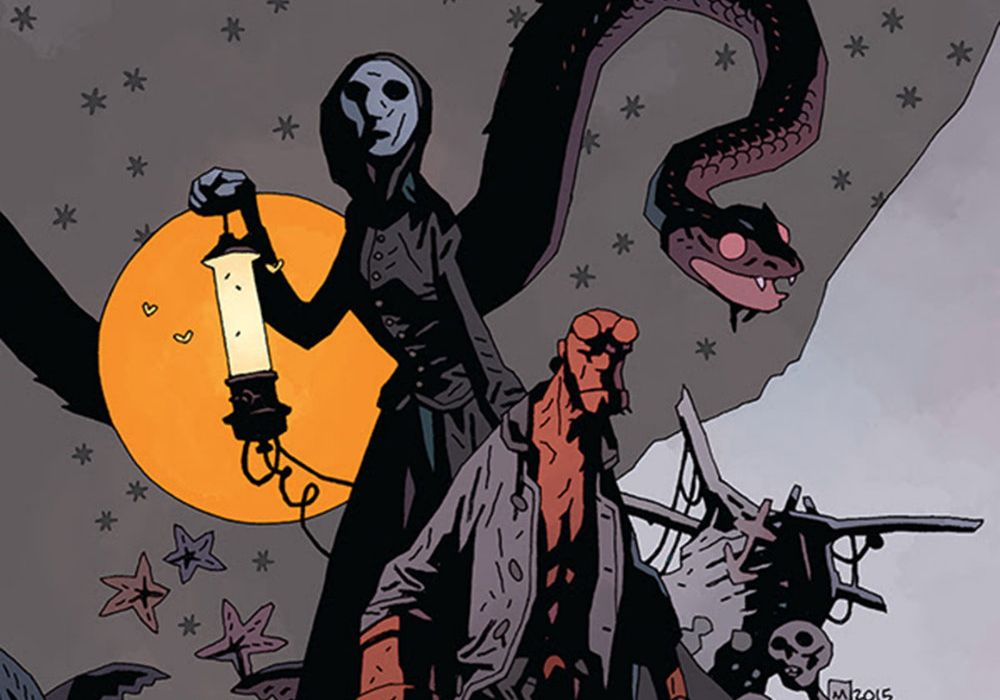 It’s 2017, and though a lot of Mike Mignola’s books wrapped up in 2016, there’s still much more to come this year. This week Mignolaversity is talking to various creators about what’s ahead. Today we’re talking to writer and artist Gary Gianni about his upcoming original graphic novel “Hellboy: Into the Silent Sea” with Mike Mignola.

In “Hellboy: The Storm” #1, Mike Mignola had Hellboy recounting all the strange things that had happened to him since he’d left the B.P.R.D. All of these moments were stories we’d seen before, except one, a curious panel with Hellboy in a little boat on his way to England. 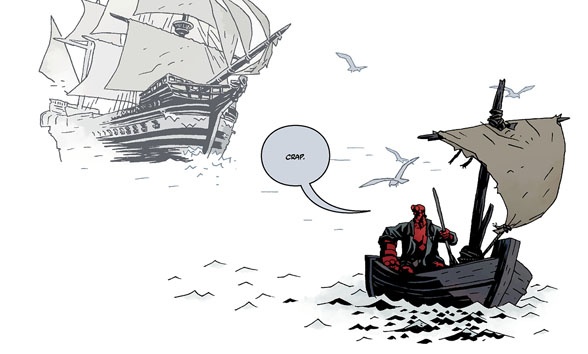 From “Hellboy: The Storm”

All we knew about it was that ‘a whole lot of other horrible stuff happened,’ according to Hellboy. As Mike Mignola explains it, this panel was reserved specifically for you so that if you ever wanted to tell a “Hellboy” story, this would be waiting.

Gary Gianni: I’ve known Mike a long time—over twenty years. Our friendship is based more on our mutual interests rather than a professional connection. It’s a friendly and more personal relationship than just two guys working in the same field. Of course, I have the utmost admiration for his artistic talent, but I’d have the same sense of wanting to know the man even if we were a couple of bricklayers. For Mike’s part, he trusted me, and I imagine he must feel the same way about the other artists he’s invited to work on “Hellboy.” 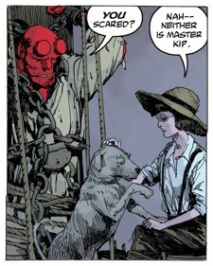 As far as my involvement with “Into the Silent Sea,” it was an idea he approached me about years ago. It wasn’t until recently when my schedule was clear enough to seriously commit to the story. I was nervous about working on the comic, however, as I hadn’t drawn one in a few years. ‘I don’t want to be the guy who screws up Hellboy,’ I remarked. ‘No, you won’t … leave that to me!’ Mike joked. When we began talking about the project in earnest, Mike’s humor and ease regarding his own creation helped relieve the stress I put myself under.

It’s interesting that you say you’d friends regardless of what field you’re working in. Reading “Into the Silent Sea” there’s a sense of that shared interest. There are certain things Mike Mignola does with his comics—such as including quotes from literature to contrast with the scene unfolding—that are incorporated into this story. But it doesn’t feel like something that’s there because it’s what Mike would do, but rather because it’s something you would do too.

You’ve got a bit of history with Mignola’s books. Many issues of the early “Hellboy” stories had your “MonsterMen” backups in them, and your art adorned the cover of 1997’s “Hellboy Christmas Special.” It’s taken twenty years, but now you’re working on the series directly, and I must say, it was worth the wait. This book is gorgeous.

Gary: I grew up in the 60s and have a great affinity for all the old Marvel comics. Still have many of my comics, going all the way back to the Atlas monster, pre-superhero, Kirby and Ditko work in particular. At this point, I see all that all the superhero stuff I admired has been revisited by so many artists and writers, good, bad and indifferent, that I‘d have little to offer in working on them today. Indeed, they are firmly rooted in my childhood.

Hellboy, on the other hand, has a whimsically poetic spirit that appeals to me and yet, in spite of all the literary and folklore allusions, it’s still a comic book with a hero beating up monsters. It’s Greek mythology, it’s 19th century Gothic, it’s film noir, it’s pulp, it’s Jack Kirby, it’s Popeye! While Hellboy isn’t part of my youth, he still reminds me of all the things I liked when I was a kid. That’s quite a literary trick, by the way. Don’t know how Mike does it.

Well, you’re doing it too. You didn’t just draw this story, you also cowrote it. According to Mike:

‘The idea was, “Gary, do whatever you want.” It turned out we kind of bounced ideas back and forth. I think the whole idea of “do whatever you want” was a little bit too overwhelming, so we kind of had to narrow it down—like “Well, OK, maybe something kind of like this…”—and then he would come back with some stuff and I would go back with some stuff and we kind of hammered out a plot together. I’ve never actually worked on any “Hellboy” thing at all like this. Nothing has ever gone back and forth this much, where we just kind of narrowed it down eventually. Who knows who came up with the bulk of the plot. Gary drew it, and then Gary scripted the whole book, but with the understanding that I was going to go back in and tweak Hellboy’s dialog … It’s a real collaboration where even now when I look at it, I’m probably not sure who wrote what or who came up with what bit, which is nice.’

What was the experience of writing this like for you, going from that originally overwhelming “whatever you want” to the story in the final book?

Gary: In regard to writing, all I can say is that the collaborative process was very organic. Not sure where one thread began and another ended. We had fun mashing up Melville, William Hope Hodgson, Lovecraft and Coleridge and Bradbury. The only guy we couldn’t fit in was Joseph Conrad. Maybe next time.

Gary: We’re telling stories to entertain people. However, if we’ve had the privilege of exposing some reader to literature they were previously unaware of―we’d be extremely gratified.

On several occasions I’ve spoken to Mike, Duncan Fegredo, and Scott Allie about these “Hellboy” original graphic novels, and they all have this feeling that the OGNs need to be more than just a longer comic. They’re meant to be something special, and “Into the Silent Sea” is absolutely that. I was stunned by the level of artistry on every page. The book simultaneously straddles the world of comics and Gustave Doré illustrations in The Rime of the Ancient Mariner. 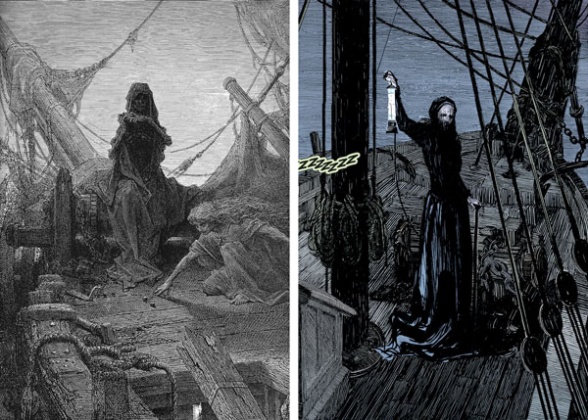 Left: An illustration by Gustave Doré from “The Rime of the Ancient Mariner”
Right: Gary Gianni’s “Hellboy: Into the Silent Sea”

Gary: Of course I’m very familiar with the work of Gustave Doré. He illustrated “The Rime of the Ancient Mariner,” which Mike and I leaned on heavily for “Into the Silent Sea” (among other things). Doré has always been a big inspiration for artists. If anyone out there isn’t aware of his other works, take a look at his brilliant illustrations for the Bible, Dante’s “Inferno” and “Don Quixote.”

Art technique aside, for me, the most difficult artistic hurdle was creating the spacial sense of Hellboy being on board that ship. This required some extra research. Are you aware that there are still many passionate model ship builders out there? I was fortunate to find a club where the skilled craftsmen allowed me to photograph some of their breathtakingly detailed handiwork. One artist in particular had a five-foot model whaling ship that he had spent two years constructing. It was well worth going the extra mile to get such invaluable reference! 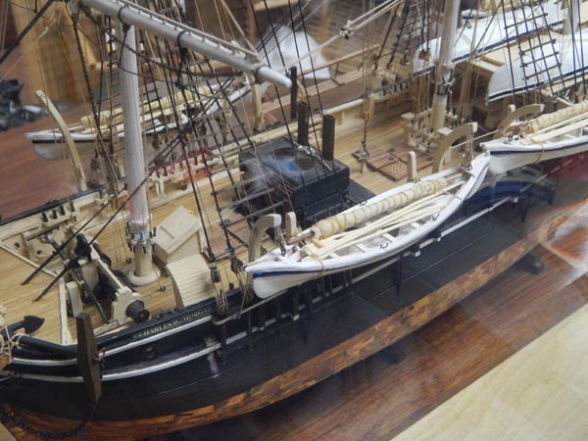 I can only imagine. When Hergé was working on “The Secret of the Unicorn,” he had a model built to maintain consistency on the ship and it shows in the final artwork, as it does here in “Into the Silent Sea” too. Did you have a particular ship you settled on to reference “The Rebecca” or was it an amalgam of several ships?

Gary: I was looking for a 19th century whaling ship. By applying some detective work, a beautiful five foot replica of a whaling vessel was located. (The actual ship itself, is now housed in the Mystic seaport museum, I think it’s called “The Morgan.”) The only thing I didn’t like were the sails. They kept getting in the way of the action taking place on deck. As I worked on the comic, a movie came out based on the true account of the Moby Dick saga. “In the Heart of the Sea” was based on the terrific Nathan Philbrick book and while the film differed quite a bit from the novel, I still found it entertaining. Grist for the mill. 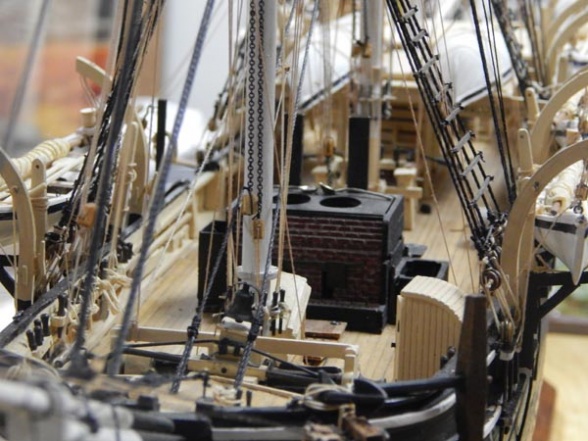 I meet people at cons who are surprised comic artists rely more heavily on reference than imagined. Of course, there are gifted artists who can make things up, but I’m certainly not one of them. When using reference, the trick lies in not using it too faithfully. It’s boring for the artist and the viewer.

Did you have any trouble integrating the larger Hellboy mythology into the narrative at all?

Gary: Yes, I did write some text involving flashbacks and some references to the broader Mignola universe but, it was merely meant to be place-holding for Mike. That’s his domain. I don’t know enough about it.

I like that this book has such an old fashioned feel to it. It’s a ghost ship story and embraces that so thoroughly. Clearly both you and Mike have a huge affection for this kind of story, and it comes through the final work in every page.

Gary: Well, thanks… Into the Silent Sea took about a year to produce. If the comic delivers on some of the points you’ve described, then Mike and I will consider the effort as time well spent!

“Hellboy: Into the Silent Sea” comes out in comic stores April 19 and book stores May 2. 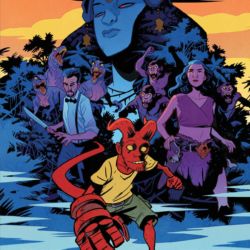 Welcome to Mignolaversity, Multiversity Comics’ home for all things Mike Mignola, and there are a lot of books in the latest solicitations from Dark Horse Comics. We are in for a veritable deluge.THE HOUSE OF LOST HORIZONS:A SARAH JEWELL MYSTERY #3 (of 5)Written by Mike Mignola and Chris RobersonIllustrated by Leila del DucaColored by Michelle […]

Mike Mignola and Christopher Golden’s Outerverse continues to expand with the ‘Tales from the Outervese.’ It’s almost strange seeing this banner along the top of a new comic, proclaiming it’s part of a shared universe when for so long “Baltimore” and “Joe Golem: Occult Detective” were extremely subtle about it, almost to the point that […]