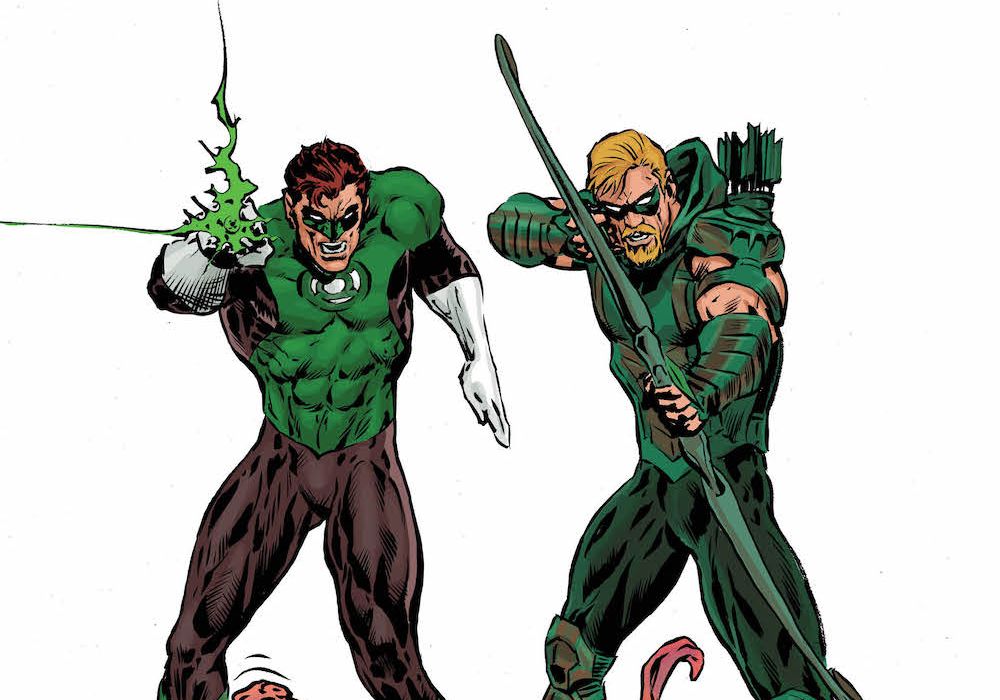 “The Green Lantern” started off with a bang. Grant Morrison and Liam Sharp’s first issue – our second favorite issue of 2018 – set the stage for exactly what the series was capable of, yet every issue offers new delights and surprises. One June 5th, #8 hits stands both physical and digital, and it is another doozy, bringing back a character with exactly one (1) appearance in DC history, 61 years ago, and doing so much much aplomb.

But the real center of the issue is the team up of Hal Jordan and Oliver Queen, reigniting one of the most iconic team-ups of all time. The issue is spectacular, from Sharp’s magnificent artwork to Morrison’s never-ending font of creativity powering the way. We had a chance to talk to both creators about the book last week, and we hope you enjoy the sheer joy that these two men bring to the comic.

As a bonus, after the interview, check out an exclusive first look at the issue, courtesy of DC Comics.

Grant, the Green Lantern mythos is this gigantic corner of the DC Universe that you hadn’t touched too much before you started on this book. So, first question: what was it about doing a Green Lantern book that appealed to you, and then sub question, why did you want to do this type of Green Lantern book?

Grant Morrison: Just the idea of doing as a police procedural, you know, really is so obvious, it’s so cheap and daft, but that’s what we’re doing. It’s like a cop show in season one, and season two when all the other stuff happens, but it’s a cop show ultimately, and we just thought like it’s a cop show on a cosmic scale.

That’s a really fun concept, but it’s also a concept that I would guess would be relatively divisive for some people, because there is this idea of, you know that police officers stand for law and order, but a lot of time police officers, especially in the United States where I am, tend to go overboard sometimes.

GM: No I get it. I grew up a punk and I fucking hated the police. Now, I know we need this shit. So basically what “The Green Lantern” is about, is that there are laws to the universe, and the laws of gravity, and the laws of magnetics, and it’s about that. It’s not about any of these things; the Guardians stand for four distinct laws of nature.

So Liam, when you see Xeen Lantern and Xeen Arrow in the script, are you digging up a 1958 comic? Or are you trying to bring something new to that?

Liam Sharp: Absolutely yeah. All the reference is there, Grant’s very specific about it. He’s got it all, it’s all in his head.

GM: This was Jack Kirby in the 50s. This family man trying to make money for his family, doing these weird stories about gigantic elongated Green Arrows; it’s so weird.

LS: It’s so weird. [Our goal for “The Green Lantern” #8] is like if Kirby wrote it and Neal Adams drew it, that was the premise. And so absolutely so many of these characters, even Glorigold, was this tiny little villain from a Kirby story, it’s taking and extrapolating from it, and sort of crossing it with Adams and bringing into the present day. I am that’s the fun of it all, isn’t it, just to take all of these things and play homage to them.

GM: And turn them into something you love.

LS: I mean that’s where the love is evident, for all of these sort of great and old medium that we’re working it. It’s nice to be able to take these forgotten old characters and breathe new life into them.

I was just going to say that, you know in the absolute best way possible.

Obviously, the touchstone for this issue, is the ‘Hard Traveling Heroes’ era of Green Lantern and Green Arrow team ups.

LS: Yeah everything that was coming out of America was revolutionary at that time. Whether you were watching Serpico or reading “Green Arrow.”

GM: All the “Green Lantern/Green Arrow” stuff was like The French Connection. It was like all those things, it was all happening at once. Like Martin Scorsese, you know.

LS:You don’t get much cooler than that.

Was there something particularly American feeling about it, to two guys who grew up overseas?

GM: I remember that guy Solomon, from the “Green Lantern/Green Arrow” story. This super rich guy, who is dealing heroin in ‘Snowbirds Don’t Fly.’ I have no idea what the drug is, but it’s some drug, but Solomon has these beautiful models next to him, and I thought, he’s the guy that modern society wants. You know. So that’s our character, and Glorigold is Solomon.

LS: Yeah. It is trying to evoke that. I mean America just seems sorta alien, as well. It seems an impossible goal. We all grew up, very familiar to American culture, but it was also a billion miles away from our own existence, so it was alien, the police looked different, and everyone spoke different. It was like an alternate reality. We would all be talking about it in the playground, but it wasn’t our existence, it wasn’t our experience, so it was one step removed.

GM: This is how it felt.

LS: Yeah. So it evokes of that. That would be good.

Now Grant, from a scripting perspective. When you are writing a story that has a character that on one finger holds the most powerful weapon in the Universe, and the other character wields a bow and arrow, does that present some issues in terms of the type of threat you can give them? Because you don’t want to give them a threat, and it’s actually addressed in the script, you don’t want to give them a threat that can only be handled by a Green Lantern ring. How do you craft a story that makes these two characters feel equally billed?

LS: It’s like he is doomed to keep on failing.

GM: He’s trying really hard to be what Hal he wants him to be, which I think is so poignant.

LS: There’s a lot of heart in the story, especially on the second to last page, where they embrace. There’s a lot going on underneath.

The friendship really comes through in this issue. And that there is some tension there, but every page you see them together…

GM: You know those dumb boys, I bet you got a friend like that. That friend your best friend.

LS: It’s unselfconscious, and yet they are total opposites. They are the classic opposites attract.

You guys have been working together now for eight issues, and we are getting close to the end of what you are calling ‘season one’ of this comic. And you’ve mentioned in the past and on this interview that you have been looking at this as a police procedural, and because of that there hasn’t been as much of an over arching story to the… There is obviously the overall macro themes of the book, but what I am really enjoying about it is, that each issue does feel like its own beast, you know and you can do things stylistically, each issue looks really unique. Liam when you get this script are you purposely trying to make it look different than the issue before hand, or is that just coming from immersing yourself in Grant’s words?

GM: Also we are talking about each issue has to be something different so that’s a dialogue we’ve already started so…

LS:But it’s always so innate in the script you know, it’s… I just want to invoke the mood that the script suggests.

GM: There’s a sci-fi cowboy in this issue, there’s a gothic feel to another issue.

LS: And it also goes like through different eras of comics too, so the one on the vampire planet was very much kind of like, I was trying to get the 70’s sort of Warren [Publishing] feel…

LS: Yeah that kind of thing, we had the Rann issue so I wanted to go much more formal and atom age for that one. So I was looking at Gil Kane and people like Al Williamson and even Wally Wood.

GM: So we actually think about this basically, that’s what you’re trying to say, isn’t it? So we think about it.

LS: Yeah I think, that’s exactly, all of it is done with consideration.

One of the things that has been really interesting about this run so far is that there’s been a real focus on Hal, but I love running into these Lanterns we haven’t seen in many, many years. So Grant, is there a Lantern that you wanted to include in this initial season that you haven’t been able to squeeze in there yet?

GM: No. I’m putting them all in. Everyone I loved, every weird one, every giant balloon one. The first year of “The Green Lantern” has like thousands of ridiculous alien species from other stories.

Liam, what has been your favorite to draw so far out of all of his Lanterns he has thrown at you?

LS: It’s funny the ones that take you by surprise, I really like…

GM: Sorry Liam, but you know we are not making this stuff up! People did this in the 60s. Ostensibly sensible people made this stuff up. And it was wild, it was a really wild stuff.

The last time I spoke to Liam we talked about Volk, and you know just how much I love your Volk.

GM: And he comes back, absolutely. Because that character is alive now. Thanks to Liam.

LS:People love him, he’s one of those ones that sorta taken on a life of his own. And we really liked Trilla-Tru in the first issue as well.

LS: But, honestly there all so crazy, how can you not like a Green Lantern who’s head is a sprig of broccoli, with a single eye? The fact that the two Cyclopean Green Lanterns kind of teamed up!

Last question for you guys. I know you can’t spoil anything, but if you could describe season two in one word, what would each of you describe it as?

GM:Anti-matter destruction of all known living things. THE DALEKS!

LS: I can’t even begin to match that… 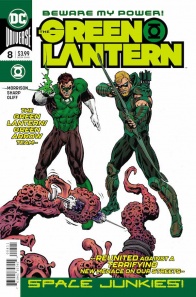 Green Lantern teams up with Green Arrow to stop a cosmic drug cartel that’s using Earth as its main distribution base! It’s a brilliant homage to the team-ups of old, as Morrison and Sharp do the 2019 version in a story we can only call “Space Junkies!” 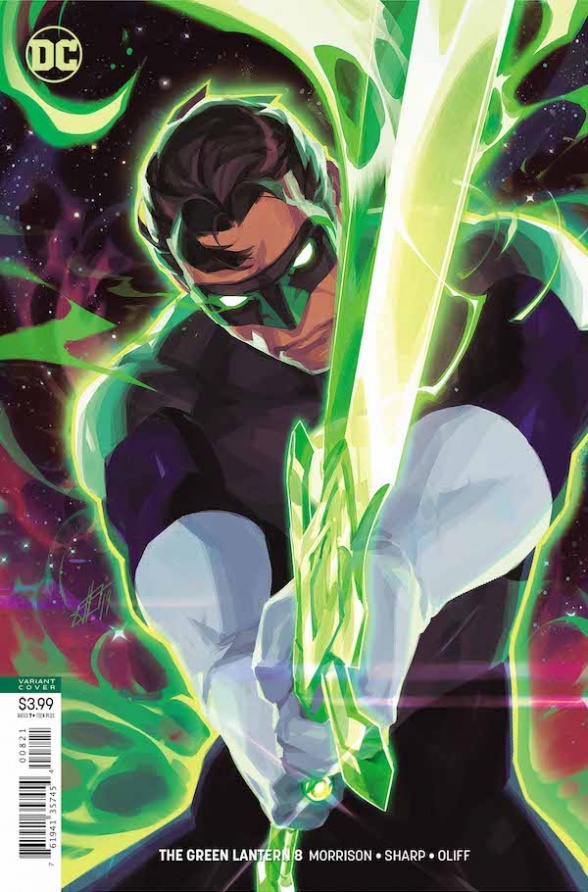 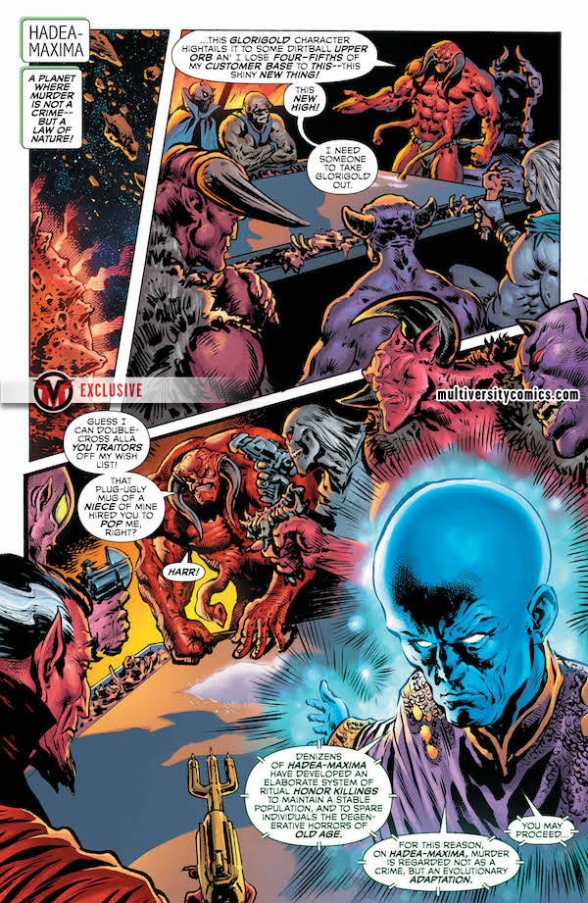 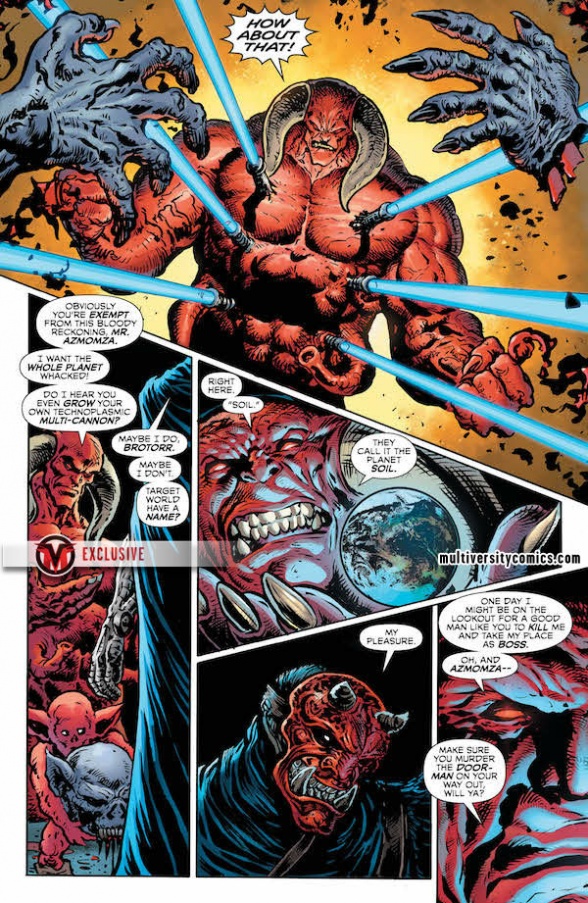 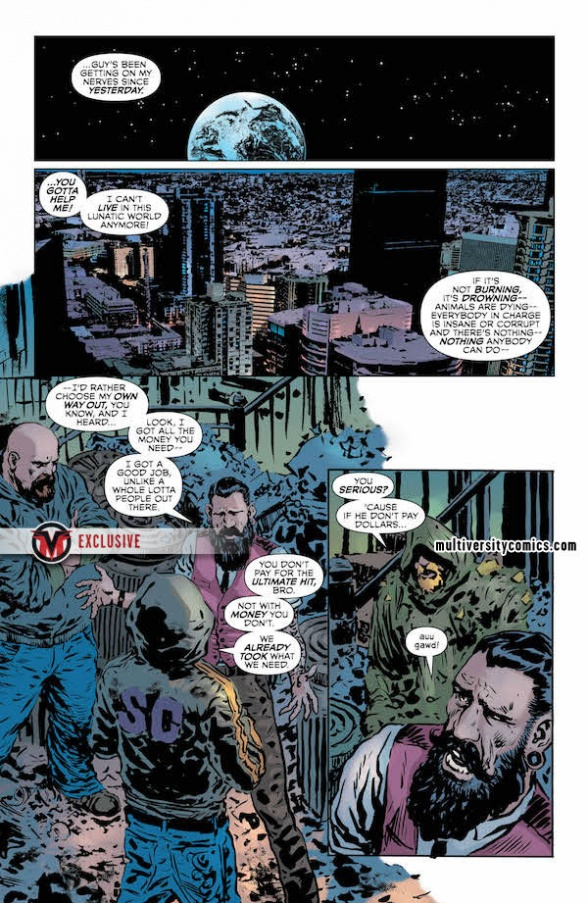 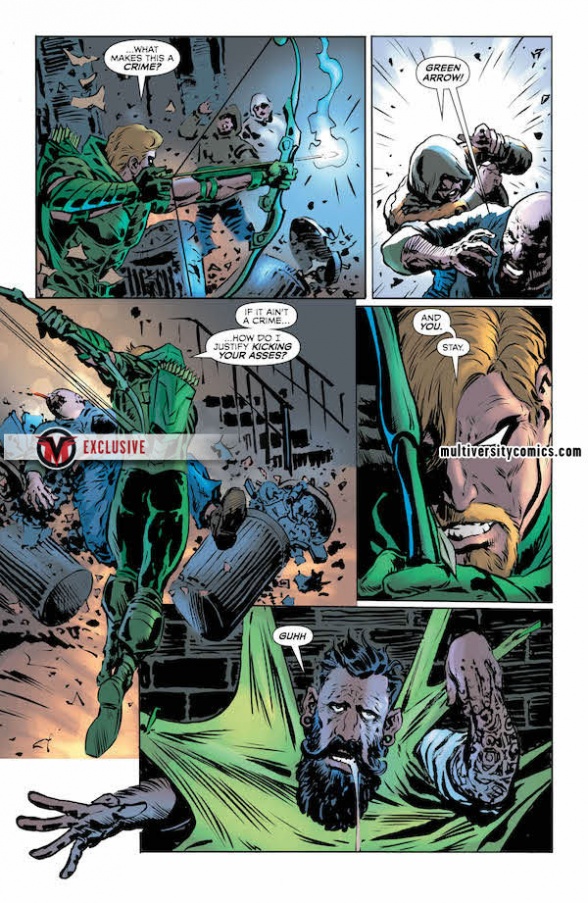 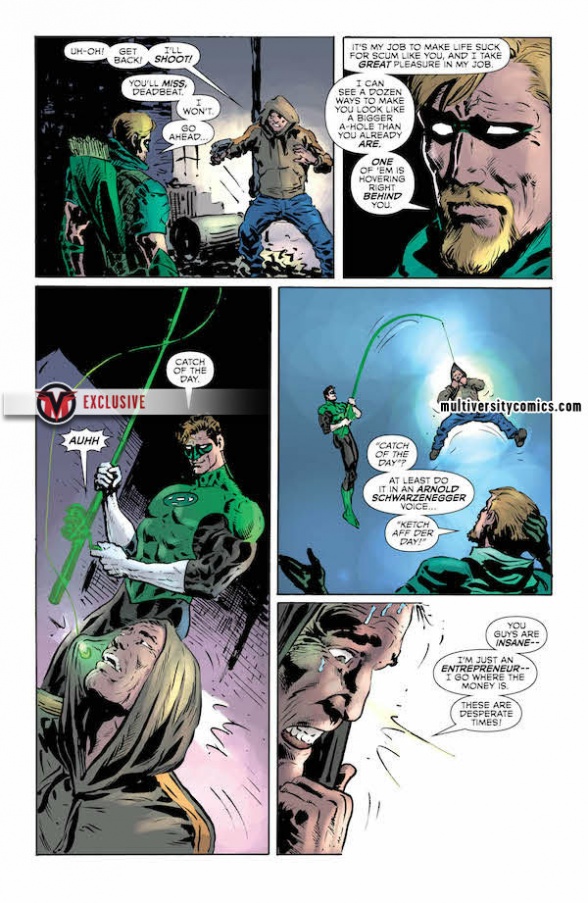 Thanks again to DC for the interview, and to Grant and Liam for the chat. Make sure to pick up the issue on Wednesday!