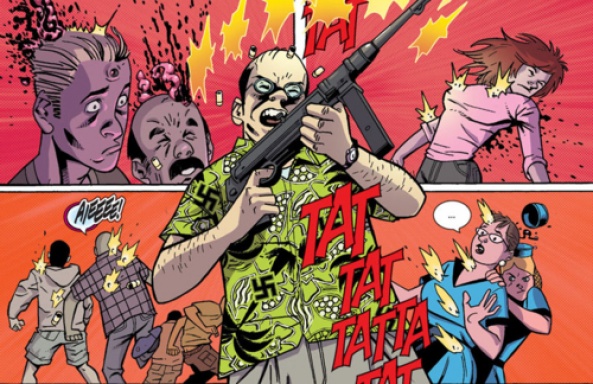 Recently we talked a bit about how Joe Keatinge is bringing Popgun ideas into “Hell Yeah” via a few serialized shorts that come with the comic. That serialization starts this week with “Hell Yeah” #3 with the first installment of “Baby Girl”, a new comic by the ThreeOneFive collective and David Hahn.

As part of our ongoing series of interviews timed for our relaunch/birthday celebrations, we sat down with part of the ThreeOneFive, Matthew Heistand, and had a bit of a chat about how the three-man writing team works, the inner workings of “Baby Girl” and more.

You represent one member of the ThreeOneFive, a three man writing collective. How did this group originally come together to write?

Matthew Heistand: I’ve known Evin Dempsey since Little League, and Dan Fifield since high school. We’re buds, and we’ve always done creative things together; for example, in college we produced/hosted a live talk show on public access television. We also share an abiding love for comic books, board games, and storytelling — all the basics. About seven years ago we decided to try and make a comic. Since none of us can draw we opted to write, and here we are.

Three people writing one story is a tad bit unconventional by most standards. What do you feel are the benefits of having so many cooks in the kitchen?

MH: It’s a lot like a writer’s room, I’d imagine. Any one person’s crappy idea can’t withstand the scrutiny of the other two guys.

How does the division of labor work? Is there any specific process you guys use when working?

MH: Generally, Evin unleashes a block of text bursting with ideas, and then we all get together and hash it out. During which, Dan always smells the B.S. in a story and makes it better. Then I shuffle off and script a first draft, which is then revised by the group. After much gnashing of teeth we have a script ready for an artist.

Let’s talk about the actual comic now, “Baby Girl.” Where did “Baby Girl” come from? What was the spark that brought the character to life?

MH: At some point in 2008, Evin pulled me aside during karaoke and yelled in my ear (over the music), “What if Sasha Grey was Indiana Jones?” The pure craziness of the question started the gears turning in my head, and by the end of the night we had a pretty clear sketch of the character that would become Baby Girl.

The title, Baby Girl, which is also the character’s name, comes from the idea that she was abandoned in the hospital just moments after being born. She was never given a name, so the name on her birth certificate is, literally, Baby Girl.

The first installment of “Baby Girl” is pretty damn fun and very lively, both in terms of sex and violence. When writing “Baby Girl”, what angle do you use to approach the story?

MH: First and foremost we’re trying to make each other laugh. At its most basic, Baby Girl is an adult Looney Tune smashed together with the first 15 minutes of an Indiana Jones movie. We’re appealing to people’s basest instincts, and serving it up with some classic adventure.

The tagline sums it pretty well. “If adventure has a fuckbuddy, it must be…Baby Girl!”

Despite the almost pure id representation of sex and violence, though, do you feel there is any line here that shouldn’t be crossed?

MH: One of the things with Baby Girl is that we didn’t want it to have any limits, so no. But, if you look at the finished product, I don’t think you’ll see anything you couldn’t find in an R-rated movie. We hint at a lot of extreme things, but it’s never explicit.

Obviously right now female representation in comics is a hot issue in terms of discussion. How do you feel “Baby Girl” fits into that conversation?

MH: I don’t presume to have any great insights into the portrayal of women in comics. In regards to Baby Girl though, it’s a cartoon, and we’re in no way trying to reflect reality.

But, if we’re talking about Baby Girl’s character, and the things she does in the course of a mission – James Bond comes to mind. For Baby Girl, like Bond, sexuality is a weapon, a way to further her agenda.

Bottom line, there’s nothing we’ve written that I wouldn’t show my daughter when she’s old enough.

I’m a huge fan of David Hahn’s work in the past, and am pretty excited to see him working on this project. How did you bring David Hahn in for the art of “Baby Girl”? What is it about his work that you feel encapsulates what you wanted from “Baby Girl”?

MH: Yeah, I’m a big fan of David’s too, and we just got really, really lucky when he responded to a want ad we posted.

Once David’s email hit the inbox, the search was immediately over. His style is the perfect counter-point to the crude elements in the story. Basically, for every tasteless situation in the script, David had an elegant solution.

We were also very conscious of the fact that we didn’t want Baby Girl to be a pin-up girl, and David seemed to instinctively get that as well. I love how with just a couple lines David implies scarring on Baby Girl’s arm and legs. She’s not just some plastic mannequin, this is a character who’s been through the wars, so to speak, and all of that is conveyed without a single line of dialogue. 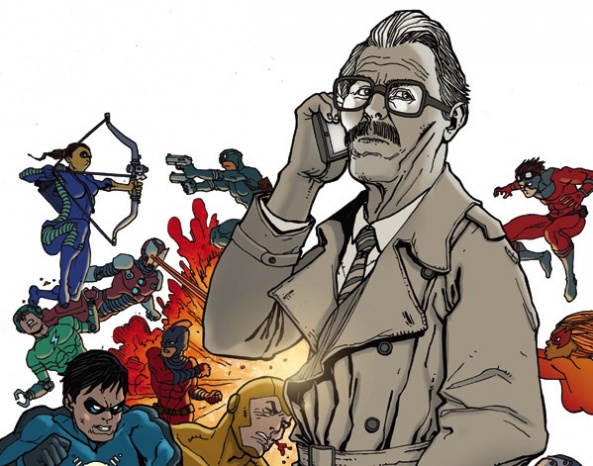 How did you originally hook up with Joe Keatinge to serialize it in “Hell Yeah”? Did you have other plans for release before talking to Joe?

MH: It’s kind of a long story, but basically our good friend and letterer/designer Steven Finch A.K.A Fonografiks worked on the PopGun anthologies, and when we told him about Baby Girl he thought it might be a good fit. And, let me digress, if you dig the final look/package of Baby Girl send a great deal of your props to Steven. He worked directly with David and Rico Renzi (our fantastic colorist) on the look and feel of the book.

Anyway, Steven’s encouragement got us started, and as it turned out David is buddies with Joe, so it all just kind of came together. I met Joe for the first time at Emerald City Comic Con in 2011, and gave him a copy of Baby Girl. He liked it, we stayed in touch, and now it’s part of his PopGun 2.0 initiative in Hell Yeah.

While I have this soapbox, I want to thank Joe for taking a chance on us, and giving us our first shot in the industry.

In addition to “Baby Girl” you guys are working on the webcomic “Deep Dive Daredevils”, a nautical romp that’s pretty different from “Baby Girl.” In terms of working on these two stories, are there any inherent differences in how you approach each comic?

MH: At their core, Baby Girl and Deep Dive Daredevils really aren’t that different. They’re both firmly rooted in the adventure genre. It’s just the tone of each piece that is dramatically different.

Deep Dive Daredevils is a love letter to two of our favorite things, Golden Age comics and Star Trek. It’s refreshing to write a story with some innocence and nary a four-letter-word in sight. I also can’t say enough great things about Danilo Guida’s artwork on Deep Dive Daredevils. It’s worth the price of admission alone, which, by the way, is free! GO check it out at www.deepdivedaredevils.com!

Both stories seem to want to play up with fun/adventure aspect of comics, from the Golden Age-esque titles to the very lively characters. For you, what is it about comics that inspires you to create in this fashion as well as consume?

MH: We’ve always been drawn to adventure stories in comics or any other medium. Adventure is more that just action. It’s an escape. You get to tag along on a journey with a character or group of characters and make discoveries right along with them. Adventure done right pulls the reader into a story and doesn’t let go.

What do you feel are the benefits to one of your comics being serialized in a print issue versus giving it away for free on the internet?

MH: Obviously, being published by Image Comics is huge! The other nice thing is I don’t have to sell anyone too hard on the Baby Girl short. You’re going to buy Hell Yeah no matter what because it’s awesome.

The appeal of the webcomic format is that we are completely in control. It’s also interesting to write a comic that is serialized one page at a time. The last panel of every page is a cliffhanger. It’s a challenge, but you can also drag out dramatic moments for a week in a webcomic when it would simply be a page turn in print.

What other plans are there for the ThreeOneFive currently?

MH: Well, if folks dig the short there are definitely more Baby Girl stories we’d love to tell. And, readers can check in with us every Tuesday for a new Deep Dive Daredevils page.

On the horizon, there’s a project in the works we are pretty excited about. It is a police procedural still in the very early fetal stage, but we are working on it from the angle, “What if the Marquis de Sade wrote Law and Order?” We’re looking for an artist to bring it to life, so if that sounds like your brand of insanity hit us up at www.thethreeonefive.com.

Thanks for your time, guys!