In 2017, Vault Comics hit the ground running with a ton of excellent science fiction comic book miniseries. They established who they would be as a publisher rather quickly and they’re becoming one of the most talked about smaller publishers in comic right now. Vault Comics knows what it wants to be and that’s a big reason why they’ve had such a successful year. In 2018, they branch out into the horror side of sci fi with “Cult Classic,” a new, creator owned universe headed by Eliot Rahal (“The Doorman,” “The Paybacks”). I had the chance to talk to Rahal about this new project at NYCC and honestly, if you’re not excited for this now, you will be after reading this interview. 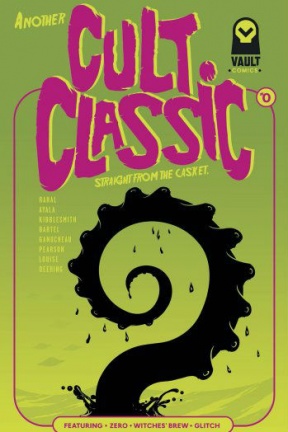 Eliot Rahal: “Cult Classic” is the new series out from Vault Comics. It’s a shared universe concept, a creator-owned shared universe, where we invited different creators to tell stories in this sort of framework town and concept. The idea is “Cult Classic” is the name of the brand, and it all takes place in the town of Whisper, which is the most haunted hamlet in the upper northern Midwest.

It’s a Twilight Zone sort of meets Springfield from The Simpsons. We’re inviting all these creators out. We have this great ashcan featuring an introduction of the universe from myself. And then we have stories from Vita Ayala, and then Daniel Kibblesmith, who’s here with us right now, and art by Jen Bartel and Emily Pearson and Paulina Ganucheau and colors by Marissa Louise and letters by Rachel Deering and design work from Tim Daniel. This is one of the most incredible eight-page shorts you can get. It gives you a nice introduction to what we’re doing.

Then we’re soliciting in November for a first release in February, “Return of the Graveyard Gang,” which is the main series, five-issue main series written by me. And each one of those series will have a backup featuring a different creative team. Then we have a lot of great … We’re talking about doing one-shots with other creators. We’re talking about bringing other people in and building it out and making this a shared universe that creators can come pitch stories in the indie comic book scene.

Okay. So the structure of it, there will be multiple series going on at once, telling the story of this entire world?

EH: Not at once. Throughout the year.

Okay. How did this project come together? How did these creators in particular become involved?

EH: You know, it was a combination. It was a collaborative effort. Working with Vault has been an incredible process. Their very collaborative editorial process and publishing process, so everything’s a team effort from creative to publishing to editorial. And I came at them with my ideas, they loved them. They came at me with their ideas, I loved them. And then we said, “Let’s do this.” I pulled from some of the people I knew. Daniel and I have worked together at Heavy Metal on “The Doorman.” Vault really believes in this idea, so they got some of the creators that they loved working with on this book, and we hope to do it with many other creators that we all love.

So from what I saw in the press release, there’s gonna be like an ’80s vibe to it. It’s gonna be kind of a throwback to that.

EH: Well, yeah. So what “Return of the Graveyard Gang” is … it’s two stories. And it’s basically The Goonies gone wrong.

EH: So they come back in 15 … they make a promise in 1992, late ’80s, early ’90s, to come back and split that money 15 years later. But they do come back 15 years later, and it’s for the funeral of the dead best friend, the leader of the group. And what it is is a book about these adult best friends all trying to kill each other for that treasure. Is the treasure cursed? Maybe. What is that curse exactly? It’s a flashback between the ’90s and the ’80s and now, and how there is no such thing as nostalgia. Nostalgia’s just a flare, a lens that we put things on to make ourselves feel good and … These kids in the ’90s saw some fucked up shit, and now they’re fucked up adults.

So with it being kind of … you talk about The Goonies. What kind of tone will we see in these stories? Is it gonna be straight horror, or is there gonna be a little bit of brevity in there? I mean, because you’re known for writing some funny books.

So yes, there is humor in this book. However, it’s not a humor book. There is horror, legitimate, body, like gross stuff, but also the horror of youth, the horror of growing up, the horror of trauma, of just having a shitty childhood is in there. And then there’s drama. These are friends. They’re friends. But there’s love too. I mean, a horror book has all of those things in it. I think that.

So we’re going to. And we’re going to have a main series eventually that I am not on, that I’m just curating. So I’ll always be involved, always injecting my ideas. I’ll be writing my own series, but I’ll working with Vault and shepherding this on a creative level to create this something that other writers and other artists will want to be involved in and can be involved in, if they want to be, if they come at with us with an idea and say, “Look at this. This is cool.” And we go, “Yes, that is cool. Let’s work together on it.” You know? This is reaching out into the comic book indie community and doing something a little bit different. We’re gonna start slow, and hopefully we build it out to be bigger and bigger and bigger.