In the recent Fantagraphics graphic novel “Roly Poly,” Brazilian illustrator/animator Daniel Semanas turned his pen to the world of comics for a dreamlike, K-pop inspired story. At NYCC, I got a chance to speak to him about his major influences, translating his skills into a new medium, depicting digital worlds on a page, and creating worlds through color. Read on for the interview, and be sure to check out “Roly Poly” wherever books are sold!

You have prior experience in illustration and animation, and I think that really shows in your comics work. Can you describe your previous work?

How would you say that your animation and illustration background has influenced the way that you approach comics that is unique to you?

DS: It was a challenge for me to use my animation knowledge and put it in a graphic novel because I read a lot of comics, but I’d never made one. And when you start doing one, you see that there’s really different ways to approach a story. And then I tried to put, like, you can see there’s a lot of frame-by-frame animation in this comic book, so I tried to take the best from my animation and put it in the graphic novel style. It’s pretty cool because you can see that [“Roly Poly”] has this difference, and it becomes more… authentic, you know? It’s kind of like a different language for a graphic novel. So the two kinds of graphic styles merge in [“Roly Poly”], and in my opinion that makes it cool.

A lot of the art looked very fluid to me in the way animation does, which you don’t see very often in that way in comics.

DS: At first I thought this was a bad thing. Like, coming from animation and trying to make this. But after I did it, I see that it’s cool because it’s different, you know? It’s the eye of an animator trying to make a graphic novel.

Branching off of that, how do you go about picking which specific moments you want to highlight? Because in comics you only get one panel one moment as opposed to animation where you have to animate all of them.

DS: It’s cool, what I found out by doing a graphic novels is that you can’t control, like in animation you can definitely control the timing, right? This is the time and you just press play. In graphic novels, you can’t quite control it because it depends on the reader. But sometimes you can, like, this is a frame and this is one minute after and then this is ten minutes after. And once in a while I do frame-by-frame that’s kind of like, “this is slow motion” or “this is 3D” or “this is movement.” And it’s really cool for me to put my knowledge of animation in this. I really like playing with timing. It was a great experience to discover how to play with timing in comics. I didn’t know at all how to do it before I did this. 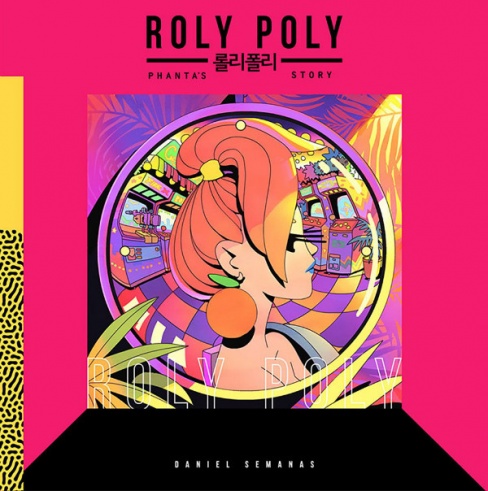 Very cool. So the way that you approach social media on the comics page is unlike anything that I’ve ever seen before. From a design standpoint, did this come intuitively to you, or did you have any particular struggles in trying to depict the digital world on the physical page?

Just from one single shot of the profile, you can show so much.

DS: And graphically it’s more interesting than telling this through dialogue, you know?

The world of Roly Poly seems like it takes influence from 90s cyberpunk and modern fashion. Did you draw inspiration from any specific sources, or is this sort of a combination of all of your major influences?

DS: My first influence graphically was K-pop clips and videos. But I didn’t want it to be about K-pop or just K-pop references. It happens in this K-pop world, but it’s about relationships, it’s about perception, you know? And then I wanted to bring in other graphics, like, not just K-pop, I also wanted to do 70s-like posters and also arcade stuff and cyberpunk, so a lot of Akira and a lot of, do you know this director, Wong Kar-Wai?

DS: Yeah, I love his movies. So I wanted to mix these different kinds of references and by mixing them, to make something new.

I want to talk a little bit more about Wong Kar-Wai and that influence. What specifically do you take from his movies?

DS: You can see, like, in my favorite, the first one that I saw and I really loved is Falling Angels, you have this first scene and I love it. It’s just contemplative, you know? You see the guy just walking down the street with really cool music, and the atmosphere and the colors are great. And it’s like, look at this scene, look at this environment. So you can see in “Roly Poly” there’s a lot of pages where she’s just walking.

Yeah, it’s more about the feeling of what’s happening in the world.

DS: Yeah, it’s the mood. You can present the whole universe of the place with the colors. [Wong Kar-Wai’s films] are great. It’s like, look at this movie. So [in “Roly Poly”] there is a light story for this character, this chapter. But it’s almost like, look at this environment. It’s all about the visual. 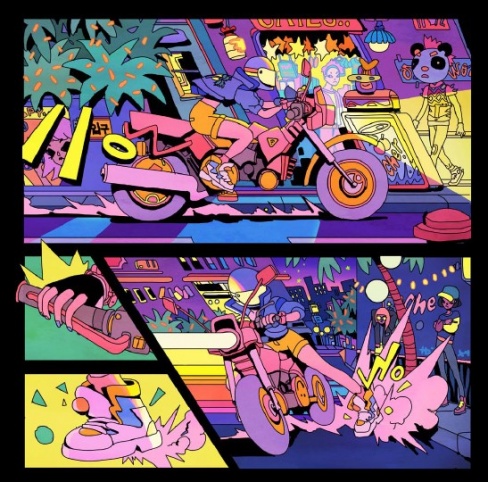 That brings me to another question: All of your environments have very full and lived-in feeling. They really feel like something that exists in the real world and has existed for a long time. So when you’re composing a page, which elements do you pre-plan, and how much of it is just improvising on the page?

DS: I wanted to make a world that is believable, so I wanted to mix different kinds of reference. I did a lot of research on Pinterest and Instagram and Tumblr trying to find this mood, this vibe. And I got some pictures that I used as reference for the perspective and just some elements, and I used them as a base and started putting in different kinds of new and unexpected references and objects. Like, there’s this guy in this one photo, and I changed him to a hippopotamus, or like other elements that were in the scene and I changed them and I change the color and I change the style and I change the perspective, to make it mine. You can see yourself in this world because it comes from our world, just distorted.

Cool. So is your approach to coloring, heavy on the neons and pink, was that influenced by anything in particular? I know you said K-pop, but what was your thought process behind choosing this specific palette?

DS: It was a great challenge for me to do this with colors because it was new to me. Like, to really study colors. I wanted the colors almost to be like a protagonist, you know? I did all of the book in black and white and then I spent seven months just coloring it. When I started coloring, I was like, “Oh, this is cool” on the first page, but then I finished half the book and I looked back on the first page and thought, “No, this isn’t good enough.” I had to redo it a lot of times. And the colors, it was really pink colors for some parts and a lot of 90s neon stuff like Akira and Blade Runner and Wong Kar-Wai. But the main thing is to find these colors to make this mood, you know? This is the environment, and you want to be there, you want to live in this world. It was a good exercise for me to find a way to express colors. Like, I can see myself before and after this experiment, and I can see that I’m much better about the combination of colors in the palette.

That’s great! So this story is titled “Phanta’s Story.” Do you have any plans for more in the future?

DS: I plan to write about five or six stories, depending on how I put it together. “Phanta’s Story” sort of works as a teaser. You can see a lot of action, and very it’s graphically-based. For the other chapters, it’s more about the story, the narrative. It doesn’t look just like this one. But I want to make sure that this first one works. I don’t know how the public will see it, if they’re going to buy it. And it took me 3 years to do this one, so the next ones will be even more difficult. I want to do them, but I’m not sure because I have a lot of other projects. Because if I do the next one, I have to do it all, you know? So they’re great but I’m not sure if I want to go with that.

Yeah, commit to 15 more years for the rest of them.

Do you have any plans to bring these characters in this world into any other medium like animation?

DS: Have you seen the animated teaser?

DS: Oh you should see it, I’ll show you. In most of my animation, it takes a lot of money and a big team and a lot of bureaucracy to make because it’s really expensive. So I tried to do this almost like a way to promote the project, to show that it can become like a game or animation or movie. But it depends on other investors. So if this becomes an animation, that’s great! We did this animation teaser and it looks like this is a movie right? But in the end we have to put, “Oh, this is a graphic novel.” But I did it to say, “look at how cool this can be if it becomes an animation.” So I hope that it becomes an animation. But it’s not up to me right now. It depends on other opportunities.

A final question now: Do you have any other comics work coming up besides this?

DS: Not for now. I am working on two new projects but they are going to take a long time. So for now it’s just this one. But I do like making comic books. This is my first one and I really love it so I want to do more, but for now I am just starting new projects.

“Roly Poly” is now available from Fantagraphics wherever books are sold. For his other work, Daniel’s website can be found here.