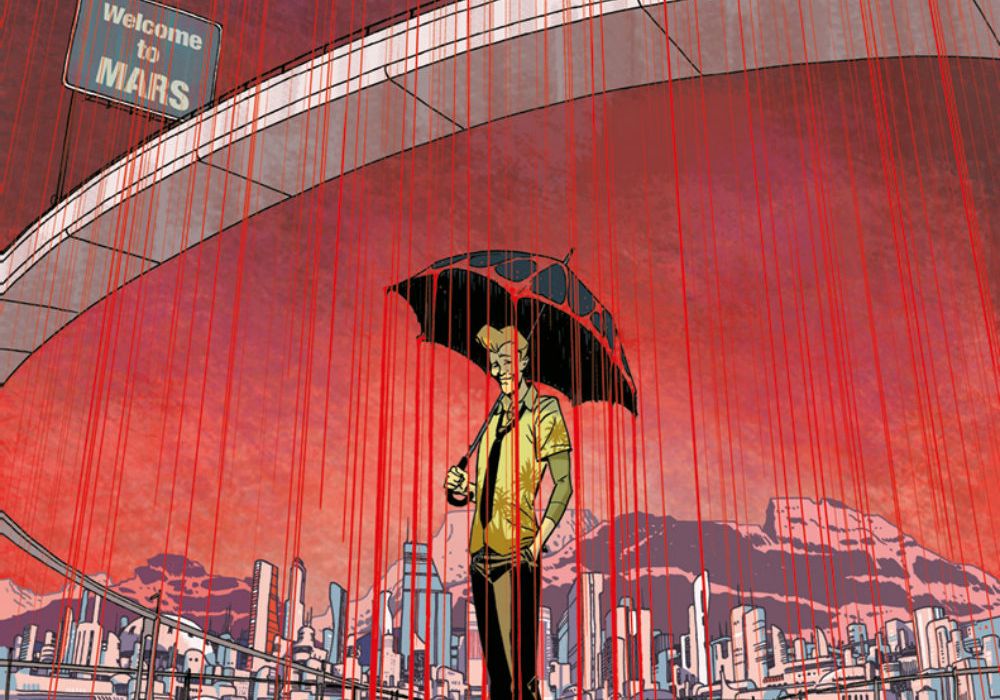 If you can’t trust your local weatherman who can you trust? What if your local weatherman was accused of carrying out the worst terrorist attack in human history? That is the case in the Image Comic series “The Weatherman” from creators Jody Leheup, Nathan Fox and Dave Stewart. Jody and Nathan were present at this years NYCC to talk to us about the series and what readers can expect from the title going forward. 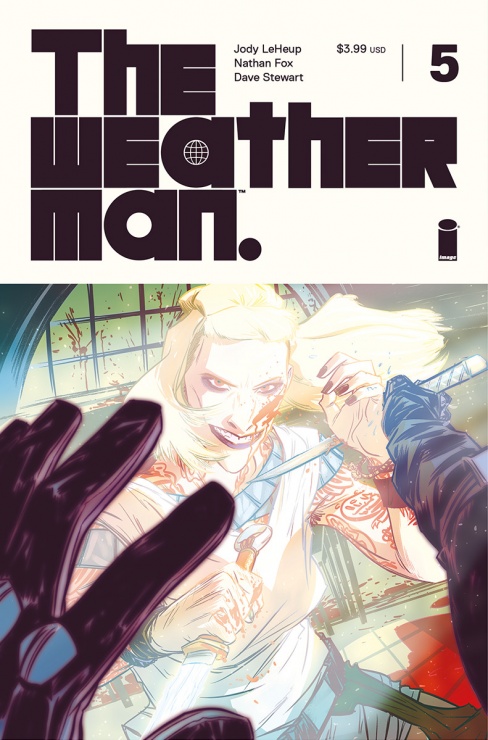 How have things been going so far at NYCC?

Jody Leheup: It’s been really good, it’s been kind of busy, so it’s been good. A lot of people coming by.

“The Weatherman” it’s a very frenetic book, I love that there is no down time, or even when there’s a downtime you guys switch over to something else that’s going on. How have you guys approached the pacing, especially with your style and Nathan’s style being very frenetic and chaotic in his art?

JL: Thank you. How has the pacing been for us? Well, I guess the pacing’s laid out in script sounds, and then passed over to Nathan who, you know, takes them in and interprets it and has his own sort of rip off of my take.

There’s almost no rest in the book, which I’ve really enjoyed .I read the issue over and over again because when I go back in and there’s stuff you’re missing. Is this something you guys are really going for?

Nathan Fox: Yeah, well I think we talk about it in terms of whole meal-comments, which is a thing we talk about often. Just making sure that people have a bang for their buck, we like the compression of it and the non stop relentless-ness of it, I think it makes for a satisfying read, but also it’s born out of the characters situations. They don’t have a chance to stop it.

JL: So you’re just along for that ride. And I will carve out some moments, and we’ll have a quiet moment between characters  here or there, or have you. But I would say it’s by design, just make sure that there’s not any fluff in the middle. No fat on this book. You know? Even the parts where there’s a stolen moment here or there or an additive on the overall scene of things, whether it’s an important character piece or something like that, so I don’t know if that answers your question, but… Yes, I would say it’s by design.

Is thia a series that just fits your style?

NF: I mean, the story of the characters, I mean even from first pass, or first read, it felt like this was a story, like I needed to do it. Even talking with Jody when we got started, it was like… we have to do this.

And I don’t know if it’s just me identifying with this style of writing, or we connect on some celestial moon base system… I mean how real and, like you said, nobody really has any time to grieve. And when they do take time, or they steal time, like those are really important moments and it’s really amazing to see that come through the script and then work that into the book and be able to face it that way, that if we’re going to do a sci-fi, a sci-fi series, we want it to be something we would want to read.

A lot of things that we’re influenced by, and then we’ve added, and really put in that love and inspiration from this. And also, too, same thing that you mentioned, we didn’t want it to stop. We want it to be like a moment, we wanted to connect with the reader, like put the story first as much as possible.

We’re at NYCC, what would be the con-pitch for the book you use, for anyone who hasn’t read it yet and comes up to the table?

JL: I guess I would hope to describe it to folks who come out the table are getting tons of excited, engaged fans of the book, and people who are really curious about what we’re doing. People that already know and just want to come by and talk about.

Basically the con-pitch is: This is a book that takes place in the far future, earth’s been destroyed after the worst terrorist attack of human history, and all that’s left of humanity is now living on terraform mars. And all these books are overwhelmed with grief and they’re angry because the people that did it are still out there, and they’re terrified of another attack. So in our environment, we’re introduced to this character Nathan Bright, fun loving, local weather man, he’s got a really unorthodox style as a weatherman, he’s more of a comedian, or radio shock-jock than typical weather man, but he loves to put smiles on peoples faces, he has a good time, he’s got a great girlfriend, and he finds himself, all of a sudden, seemingly out of nowhere accused of masterminding this attack on Earth.

And of course he’s like you guys definitely have the wrong guy, I see you on your commutes every morning, you haven’t met my golden retriever. The problem is that Nathan has a giant hole in his memory, and he can’t actually say if he did it or not. So he’s forced on the run, totally unprepared for life as the galaxies most wanted man, and on a journey for truth, and hopefully fill in those blanks, and understand what happened, and hope to find the key to stopping a second ass terrorist attack.
He’s joined on this journey by Amanda Cross, who is an intelligence field agent, who’s assigned to building a case against Nathan, because she absolutely believes he’s responsible. But, due to story elements, they find themselves handcuffed together on this journey together. It’s kind of in terms of an oil and water dynamic. And we’ll get to know more about each character and what makes them tick along the way, and once we start to fill in the blanks is when things start to really get crazy.

I think one of the most interesting ideas about the series, is the idea that Nathan doesn’t remember any of this, he’s not essentially the same person he was before when he mastermind his attack, and is coming to terms with it. This is something currently in the news, I know right now they’re discussing if we should put to death someone who have dementia and don’t remember their crimes. Is it really important to have Nathan be someone you sort of care about and find that you’re invested in? How do you tackle that idea and does that affect your story telling? It’s a big, moral philosophical question hanging over this book that is also filled with a lot of action and Sci-fi.

NF: I think those questions are something that are essential to the story and that we’re asking larger questions than just an action sci-fi story. There’s a lot of plus in the world we live in, and things that are tangible and relative now, that are part of this book. I think it’s one of the things that really adds a lot of content relevance to the story we’re trying to tell.

JL: Exactly, there’s a lot of existential questions, there’s a lot of questions about how we deal with trauma, how we project pain into other people, and what is it mean that we’re so driven to the sign, and what do we know that it’s not going to solve our problems we have and all of us have on our own plate. There’s a lot of questions going on I think we are asking. Obviously it addresses most of the story, and there may be some painful moments on the way, and we’re going to move through them together. In that sense, yes, I mean the characters were critically important in terms of focal points to explore some ideas we want to explore and yeah, we’re having a great time.

Issue #4 had a big cliffhanger. You guys have nailed cliffhangers throughout the book so far. I mean, the end of issue one fucking killed me. So crushing. What can readers expect going forward in the series?

JL: You know, issue’s 5 and 6 there’s so much I want to spoil and tell you about, but it is… we really want people to enjoy 5 without any information, just what you have from the first. I can say, though, that yeah, I can’t do it. It’s definitely going to be very satisfying, I think, for folks, when they get to issue to 6, and issue 5, there’s an ending to issue 5 that I think people are going to be very excited for.

We’re very excited to be able to share it with everybody, we’ve been working on it for a long time, we have so much more… first volume then into volume 2, volume 3… so this is all part of the larger design, a larger plan, we know where everything’s going, and hopefully people are excited to read it.

Thanks so much man. 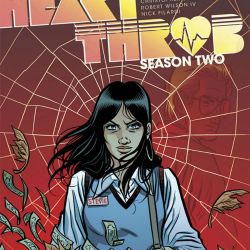 Robert Wilson IV can be described as many things. Graphic designer, comic book artists, story teller, and maybe even a heartthrob. At the very least he is the co-creator and artist on the Oni Press comic series “Heartthrob.” The series set in the seventies is about “bank heists and thieving hearts” from Robert and the […]