Kieron Gillen is no stranger to the darker sides of fiction, particularly, but not exclusively, in the realm of fantasy. From the recently concluded “The Wicked + The Divine” to “DIE,” his creator-owned works have been utterly fascinating while dipping into dark places from which many would shy away, albeit with humor peppered throughout some of those stories to help lessen the load.

With the most recent smash hit of “Once and Future,” he took the time to answer some of our burning questions about where this Arthurian deconstruction will head next. 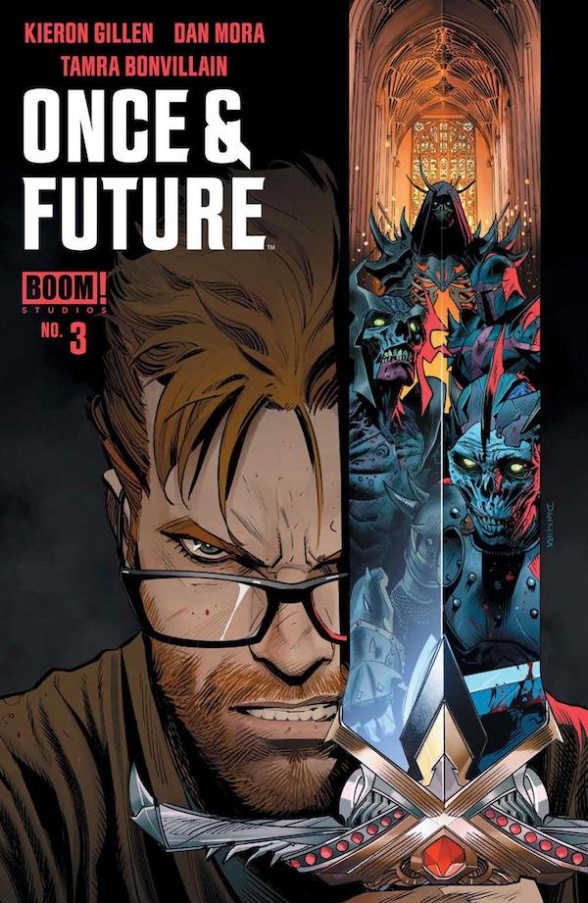 How would you describe “Once and Future” for an incoming audience?

So far, “Once and Future” is focused on the famed Arthurian literature taken into a darker, more realistic bent, magic aside. Considering that the Matter of Britain is being shown, is there a chance you’ll be taking in the centuries-later Matter of France as well, given Charlemagne’s ancestral ties with the likes of Arthur’s hated enemies?

KG: “Realistic” is a loaded word I’d likely reject, but I’d go along with “darker”. This is very much a horror book, haunted by my early teenage exposure to the wasteland sequences in the classic 1980’s movie Excalibur. Laughing Mordred in the golden armor, the corpses swinging in their gallows, all those dead knights…

Let’s put it like this: given long enough, there isn’t a period of Arthurian lore I won’t dance with. The book is explicitly about how the myth has been used at different times. Even the earliest Arthur has its roots in other folklore. My main bit of research has been less any individual story and more the shape of stories, and how they change. This tends to lead to confusing and elaborate descriptions for Dan, where I give the whole history of how the Grail has looked like in different periods.

Is there any particular take on the Arthurian myth you use particularly for “Once and Future?” A certain author like Sir Thomas Mallory’s Le Morte d’Arthur, overarching legends across history and the recurring patterns in general, or are you, like with the more overtly fair folk look for the Ladies of the Lake, returning parts from the Welsh traditions?

KG: Basically, as I say above, I’m talking widely and riffing hard. Some of it is just trying to make things which felt absolutely sharp edged in a period feel sharp edged again. There’s a tendency for works to become quaint with societal shifts – to choose an example which isn’t really relevant to “O&F,” once brutal swearing just comes across as comedy, for example. There’s also limits on what you can reclaim – when I was writing “DIE” and researching the Tolkien episode, discovering Tolkien was twitchy over reclaiming the word “Elf” which had been turned into something far cuter than he was considering. Even he drew the line at Gnome – all the Noldor elves were originally “gnomes” but he realized that the little garden gnomes had moved that beyond reclamation.

I’d say a theme is mixing stuff up. Yeah, in this early story I’m leaning on Early Arthur… but it’s not just early Arthur traditions. The confusion is very much part of the mode.

Outside of Arthurian myth, are there any other stories you were inspired by for this tale?

How did the announcement of “Once and Future” becoming an ongoing change the way you approached the story, if at all? Would you have preferred working within the constraints of a series of minis?

KG: To state the obvious, if I’d have preferred it as a series of minis, I would have done a series of minis. It’s a different aesthetic choice, which brings forth different things from the material. It’s been fun to move from one mode to another. The main change has been to bring some mysteries forward from later arcs and to push some answers back. With a mini, I’d be wanting it to feel more firmly concluded, with the mysteries that have been explicitly raised to be explicitly answered. While I’m be answering the core ones, that it’s continuing means I can bring through some mysteries from future volumes as explicit foreshadowing for where we’re going. The arc always ended with a “this is a new status quo to explore” so it worked as an end of arc beat anyway. I tend to write relatively modular in my ongoing work anyway. There’s been less work than you may expect to switch from one to another.

What kinds of notes do you give to Dan Mora, Tamra Bonvillain, and Ed Dukeshire in your scripts, if any?

KG: I try to write in a more open style than I do either the mechanical precision of “WicDiv” or the expansive download of “DIE.” It’s an action comic in an accessible style, and as such I’m trying to create as much space as possible for Dan to go to town and get his Kirby on. It’s not as if I write light scripts, even here, but it’s less specifically calling for effects – there’s exceptions, but mostly I’m doing the minimum to get the moment and the flow of action. Where I get heavy is either character description stuff, world-building or just giving a whole bunch of reference. There’s a lot of real-world environments in “Once & Future,” so I’m sending him maps and photos of Bath Abbey or Glastonbury Tor or whatever else. Tamra and Ed’s notes are normally when I’m specifically looking for an effect – the Otherworld coloring switch is one of our core bits of visual style, so is called explicitly in the script and involved a bunch of conversation. When I’m looking for non-traditional lettering or a style effect, I bring it up with Ed.

As I say in most of my scripts, it’s always meant as the start of a dialogue rather than a dictatorial state. I like to present a solution for a problem, but as long as it serves the story, I’m very open to stuff.

With Arthur assembling his Knights of the Round Table, the whole thing feels like a villainous take on tabletop role-playing games, with him putting together an adventuring party that the heroes are forced to thwart, rather than the reverse. Is the parallel intentional, given you have a more deliberate use of RPGs in “Die” being published as well?

KG: That’s a fun way to look at it. I like that. It’s not deliberate, but I like the parallel. In reality, RPGs are really echoing core cultural myths like the Arthurian Mythos. It’s not that the gathering of the round table simulates D&D – it’s that D&D simulates the gathering of the round table (among other things). There’s actually a region of “DIE” which is explicitly about looking at this kind of stuff, which I’m looking forward to writing about, eventually. Stephanie [Hans] wanted to do something with The Song of Roland, which set me digging down this hole.

Anyway – the second you decide to flip the Arthur myth, you end up in a place like this. Not that the party is even really properly gathered. A big part of me realizing it was more than one mini was doing the research, selecting what I needed for the story and realizing how little of the Arthurian big-hitters that I’d actually used. Forget the minor stuff – there’s no Guinevere, no Lancelot, no Le Fey, no Mordred. Hell, there’s no Merlin. There’s a lot left to play with. That’s one of the fun things when doing a riff on this kind of popular myth.

Will we be following both of these groups, the heroes and the knights, forming up in equal amounts through the story, or are you going to be concentrating more on one side or the other?

KG: Bridgette and Duncan are the leads. Basically, we see the vast majority of the story through their eyes. Issue 2 is the anomaly, really.

Is there anything else that you would like readers to know about “Once and Future?”

KG: Issue 3 should drop by the time this interview is out, which is another tour de force by Dan and Tamra. It’s just a joy to see them attack the pages. Dan’s always been an astounding artist, but this is something else. I’ve just sent off my lettering script for issue 4 so Ed can letter it, and – cripes – this really is dark. I said this is my fun book. I probably should have stressed the subtext of “this is a fun book… for Kieron.”