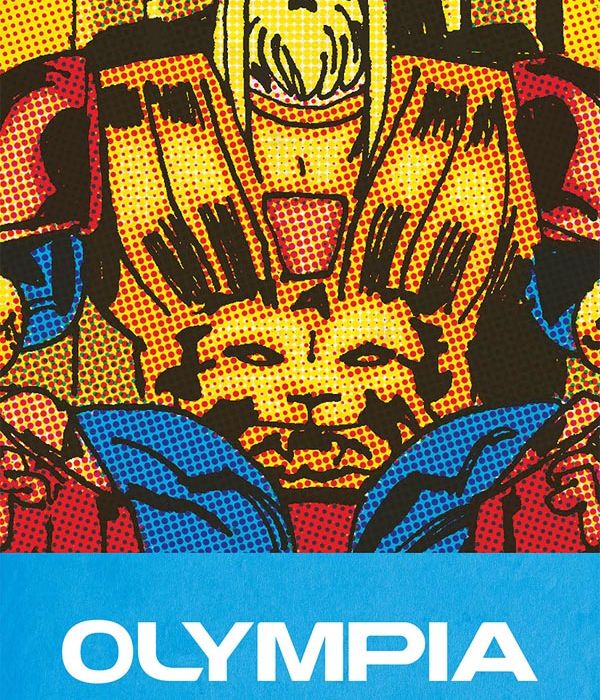 For many children when growing up their earliest heroes are often their parents or their favorite comic book/cartoon characters. As we mature our heroes may stay the same but the reasons why  we look to them as heroes may change and may even find the real and fictional people we’ve look up to share many of the same traits. To find where the line of real and fictional heroes blur look no further than the new Image Comics series, “Olympia.”

From creator Curt Pires with art from Alex Diotto, colors by Dee Cunniffe, letters by Micah Myers and co-written by Curt and his late father Tony Pires the new series “Olympia” examines what if a young boy who is in love with comics one day happens upon his favorite comic book hero wounded and in need of his help. The boy is Elon, a latchkey kid, who must help Olympian recover and find out how he made it out of the comic book and into reality. Oh, and if anything else more sinister other that Olympian made that journey as well.

We were lucky enough to be able to speak to co-creator, Curt Pires to learn more about Elon, Olympian and the series “Olympia” and answer more questions we had. Curt discusses golden age comics, writing the book with his father, and what makes a good hero. A big thanks to Curt for taking the time to answer our questions and be sure to look for “Olympia” out from Image Comics this November 20th.

For those readers looking for some good comics this November, what is “Olympia” and how and when can they get their hands on it?

Curt Pires: “Olympia” is an adventure / comedy comic about a boy whose father recently passed away, who gets the surprise of his life when the character from his favorite comic comes crashing out the pages of the comic, and into the real world. Think ET meets JACK KIRBY with a little bit of Shane Black in there. The first issue is out November twenty. They can preorder the book now by telling their shops they want to pull it.

The major appeal for me and I would have to imagine for most people with a heart has to be you writing this story with your father. What was it like to share that experience with him?

CP: Working on it with my dad was a blast. I wish he could have seen this book come out and hold it in his hands. But I know he’s with me. I had a chance to share the first couple issues with him before he passed and he was so stoked. He would always ask me “whens our book coming out!?” I wish we could have worked faster. But these things are out of my control.

The story centers on a young boy named Elon who is a comic/superhero fan. How do you try to capture that mindset and energy as an adult who is now a comic book writer?

CP: I try to tap into the joy that really good comics bring me. A lot of it’s from my memory. That holy shit moment of reading something like DKR for the first time and just spazzing out and googling frank miller and just buying everything he did, watching every interview, Elon is sort of the embodiment of my early enthusiasm and ongoing love affair with this medium.

“The Fiction” was another really great series of yours who’s narrative came from the point of view of kids. As a creator and writer what is it about the child’s perspective that is appealing to you?

CP: I think kids are wiser than adults in a lot of ways. They’re not as programmed or as jaded as we are. They can see the world in ways that we can’t. I think there’s a lot to be learned from children honestly.

I always love seeing present day representations of classic golden age style comics. First, Diotto’s art is great and really captures that look and feel but for you how do you set out to represent that era of comics? What is it about those comics that still hold up today?

CP: I think what still holds up is the work of a lot of these creators. If you look at the original artwork of any number of guys working in that era–it’s pretty easy to realize they were masters of what they were doing.. They didn’t have photoshop or computers or all this digital stuff–but the skill was evident. And I think there’s a purity and sense of adventure to these earlier books that we’ve lost. I love reading Kirby / Lee FF because there’s just such an energy to that book. It’s like raw optimism and ideas just hurled out at a crazy velocity.

I mentioned it in the previous question but Diotto really shines in this series. What has it been like working with him creatively and what does he bring to the series that is uniquely himself?

CP: I mean Alex brings everything. There’s no book without him. He executes the homage sequences with brilliance, but also cuts back to the real world stuff with ease. I’m asking a lot out of him, and he’s delivering every time.

I have been a fan of all your previous work leading up to the series and was honestly blown away by everything about “Olympia.” It captures the honesty of your previous work but maybe hopeful is not the right word but there is a lightness in this series versus other work. For you what about the work and goal of this series has been different?

CP: I think this series just comes from a very sincere and pure place, and that in a lot of ways showcases a softer side of myself / my writing that I was maybe scared to show. I think with Olympia I’m just trying to make the most human comic I can. It’s larger than life comic book stuff mixed with just super raw heartbreaking shit that feels like it could break you. But if you put it on the page, it becomes sort of like a gift, a way of turning the pain into something beautiful. If that makes any sense.

The series is solicited as a 5 issue mini. What can readers expect for the story? Is this a one shot complete story or is this a universe you could see yourself returning to?

CP: Open to returning, just trying to land this first story, to be honest.

In a story that features a hero figure a child looks up to and the addition of working with your father on this series what do you think it is that makes a good comic hero? Was there anything that you looked up to or felt about your father that mirrored that Elon/Olympia relationship?

CP: I think a good hero is someone who is flawed but in spite of their flaws, does the right thing. We are all, as humans, capable of being heroes. It’s not about lifting a train or flying, it’s about going out of your way to exhibit kindness to the world around you. And standing up for people who can’t stand up for themselves. I see my Dad in Olympian in some ways. He never gave up, never stopped fighting, and would never relent in the face of adversity, if he knew he was on the right path. It’s something I’ve really taken to heart since he passed.

Comics is a medium that is very adaptable in its ability to tell stories. Just in the pages of this book you are able to visualize the medium of comics within the comic. It is also able to tell these very personal and emotional journeys. Why do you think comics work as a medium to tell these sorts of stories and as a way that works for you to tell those stories?

CP: I think there’s a level of experimentation and sort of formal trickery inherent in our premise of this comic, that really could only start as a comic. It’s not like this is an idea that would make sense if we brought it elsewhere you know? And there’s just something so beautiful and magic about comics. An energy they have. And that’s not easily replicable.

What do you hope readers take away from this series? What is the release of this series following the loss of your father and co-creator?

CP: Honestly, it’s tough. The day before the book announced I had to write a quote for the image press release and I swear, I could barely do it. I couldn’t pull it together. But as this goes on, I find more and more strength and feel better and better about the people who are learning about my dad–and are going to experience the book.