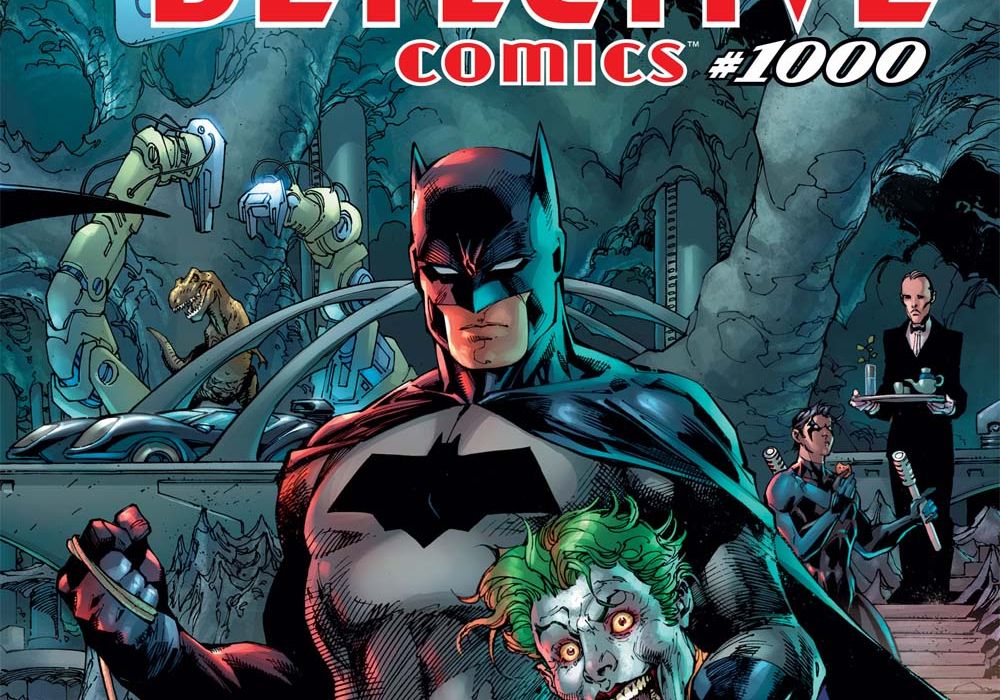 This week, “Detective Comics” writer Peter J. Tomasi has found himself in the driver’s seat for yet another big DC Comics celebration. Tomasi’s lead story in “Detective Comics” #1000 will not only introduce the Arkham Knight to the DC Universe proper, but also carry the series forward into its next 1,000 issues.

At C2E2, we managed to snag a few minutes with Tomasi and chat him up about his “Detective” run, the traits that define his version of Batman, and of course, who may or may not be hiding under the Arkham Knight’s mask.

So I just re-read ‘Mythology,’ your pre-“Detective Comics” #1000 story, this week. It was very cool to realize that that story was basically your Batman anniversary and birthday celebration. Was it important to you to sneak your celebration in beforehand, because you’re the guy carrying the ball forward in “Detective” #1000?

Peter J. Tomasi: It really was. I wanted kind of a nice transition into my #1000 story. I didn’t just want it to be my #1000 story, but I wanted it to have this fabric and this tapestry to lead in for my initial salvo. Because it wasn’t like I was starting 20 issues back. It was really pretty quick. I started in December, the book comes out twice a month, and boom, suddenly we’re at #1000.

So it was important to really just start celebrating right off the bat. Even the title, I wanted the title to feel celebratory in the same way.

Yeah, the story ends up being very big. But at the same time, you kind of played it close to the vest throughout the story, as to what was actually going on.

But most people really enjoyed it. In the end, of course, when you ask “Who can beat Bruce Wayne,” it’s Bruce Wayne. It was important to really approach that story with a different sort of twist, and not make it the average villain-of-the-week story.

You’ve gotten a lot of mileage, actually, out of showing young kids in Batman cowls. I remember hitting that page-turn reveal showing Young Bruce [at the end of #998] and being a little floored.

PJT: There’s just something about that imagery. Like when I first used it in “Batman & Robin,” and there’s that great scene where Damian is trying on Bruce’s costume when he’s with Talia on her island. It looked great; it was just so funny and yet touching. It had a pathos to it that you get with one image. It’s so cool to see.

There’s so much great imagery in Batman. You always think you can’t find something else, but you always can.

So you’re in the driver’s seat for “Detective Comics” #1000, which is pretty cool and I would imagine was slightly harrowing.

I’d said to some other people, ten-year-old Petey Tomasi would never have imagined the stars would’ve aligned to be writing the lead stories in these two #1000 issues. So yeah, there was no nervousness. It was like, “Wow, awesome!” This is great; no pressure, no nothing. I was like, “Bring it on!” I was really happy about it.

You’ve got this all-star roster of creators on the issue, and each writer has certain traits and qualities that define their Batman. So what defines your Batman?

PJT: I think, like I mentioned earlier, just being human. I like a fallible Batman. I like a guy who, even though you know he’s gonna probably get it all squared away, you just make sure that there’s some stuff in the shadows that’s always going to throw him. That might toss him for a loop, but that he’s going to fight through. And that’s going to make him stronger on the other side.

And when you say “being human,” I think your Batman connects to the people around him a lot better than other writers’ Batman does.

Batman doesn’t need to be a grump and a bastard to everybody all the time, because then he becomes a one-note character. I want him to feel there’s family involved. I mean, he’s taken these people under his wing, he’s taught them stuff.

Even when Damian died, people were like, “He’s still grieving?” Yeah, of course he is! That was his son. Believe it or not, you don’t just kind of go –

PJT: Yeah, it was important to show that he was really shaken up by it, and put him in a place where he’d done some unreasonable things. I mean, he takes apart Frankenstein in an issue. And at first, [DC co-publisher] Dan DiDio was like, “What the hell? Batman would never do that.” And I said, this Batman is becoming a little unhinged. He just lost his son. And Dan said, “You know what, you’re right.” So we got to show him doing stuff you might not expect him to normally do.

So for “Detective” #1000, your story is an Arkham Knight story. First off, to let you get this out of the way, is it Jason Todd under the mask?

So that’s the actual question I had for you, is what made you want to bring the Arkham Knight concept into the DC Universe? And what will people who played the Batman: Arkham Knight video game or read your prequel comic recognize, and what have you tweaked?

PJT: It’s just a character that I wanted to surprise people with, that wasn’t just the usual. That was something a bit off-kilter that people will be able to experience on their own for the first time, and not have to go delving back too far into Batman lore to appreciate.

With “Detective” #1000, I read my “Action” #1000 story right before I started writing it. And I wanted it to be a day and night kind of thing, obviously to play up the contrast between the characters, Superman and Batman. So, all of a sudden, I had the idea to tell my story from the Arkham Knight’s point of view. And you know, Batman is a villain to him. The Arkham Knight is saying Batman is bad for Gotham, and it was interesting to play that angle. Batman’s this cold, calculating bastard from the Knight’s point of view in “Detective” #1000. 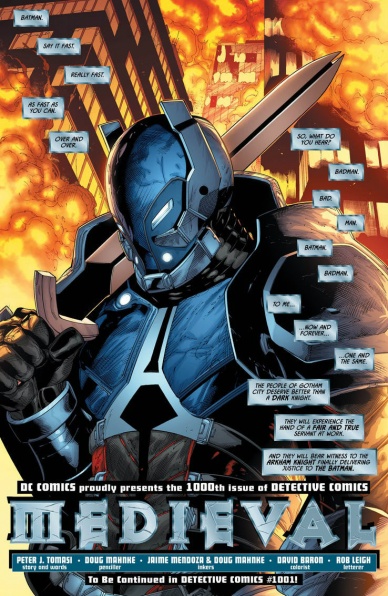 So that was a conscious choice for you – in this book that’s basically a celebration of Batman, you brought in this new villain to trash him?

PJT: Yeah, because I knew everybody else’s story. I knew we were all going to do that kind of celebratory story, and I wanted to do something a little different. Let’s give a different perspective on what Batman could mean to somebody else.

Yeah, and you kind of already got to do your cool, celebratory, “these are all the aspects of Batman” story beforehand.

So I imagine that “Detective” #1000’s going to draw a number of extra people into comic shops on the Wednesday it releases, just to pick up the anniversary issue. And if I do my job right, this interview’s going to go up that Wednesday. So what would you say to the readers who may not have been to a comic shop in awhile, or for who this might be their first Batman issue, to bring them back for “Detective” #1001?

PJT: You just hope that the character grabs them. He’s been around for 80 years for a reason. He’s a character who can walk through any genre and still make it work: war, western, sci-fi, you name it. You can put him in these different locations across the globe, and he still works anywhere.

I think people, if they haven’t read Batman, they’ll be like, “Ah, this is all pretty cool.” So hopefully there’s a percentage that stay on board with us and keep reading. 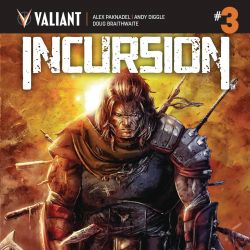 Writer Alex Paknadel is busy at the moment alongside the other writers of White Noise Studios (Ram V, Dan Watters, and Ryan O’Sullivan) who are taking comicdom by storm. We had a chance to talk with Paknadel, and artist Martin Simmonds, many months ago about the now critically-praised “Friendo,” that just ended over at Vault […] 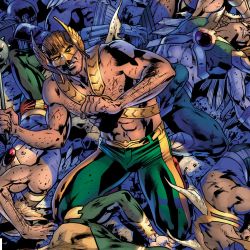 Robert Venditti has quite a few projects coming out at DC Comics at the moment, all dealing with history in unique ways. There’s “Hawkman” with artist Bryan Hitch where Venditti is revitalizing the history of the Carter Hall. There’s “Freedom Fighters” with artist Eddy Barrows where we’re getting an alternate history in the DCU where […] 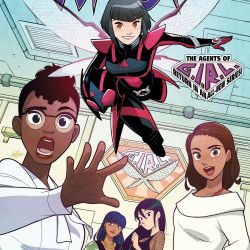 This interview first appeared Saturday, April 6th, 2019, on the most recent episode of the Make Mine Multiversity podcast, which you can find here.Writer Jeremy Whitley is in his second volume now with the new Wasp in the Marvel Universe, Nadia van Dyne telling stories about science, empowerment, mental illness, hope, and so many other […]