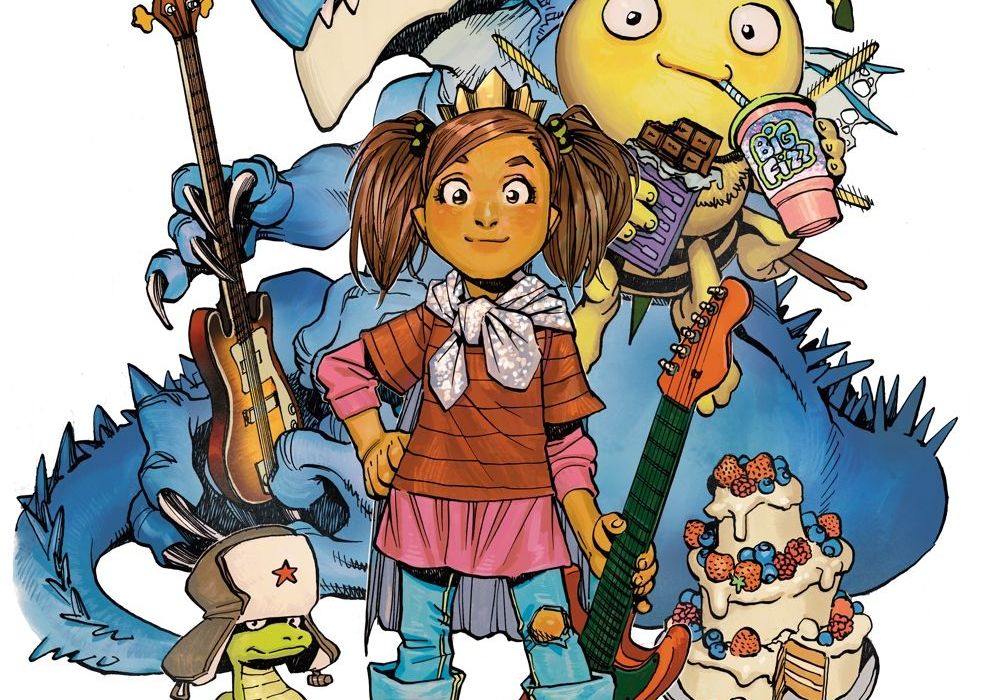 Back in 2015, the team of Greg Pak, Jonathan Coulton, and Takeshi Miyazawa ran a Kickstarter for “The Princess Who Saved Herself,” a graphic novel based on one of Coulton’s songs. Three years later, the crew – the same who made “Code Monkey Save World” back in 2013 – embarked on a second Kickstarter campaign for “The Princess Who Saved Her Friends,” the sequel to the first volume.

The campaign ends on Wednesday, so there is still time to get in on this volume. Pak and Coulton sat down to chat with me about the book, their creative process, and translating music into a comic. Make sure to back the book before Wednesday’s deadline!

The Kickstarter page is here: 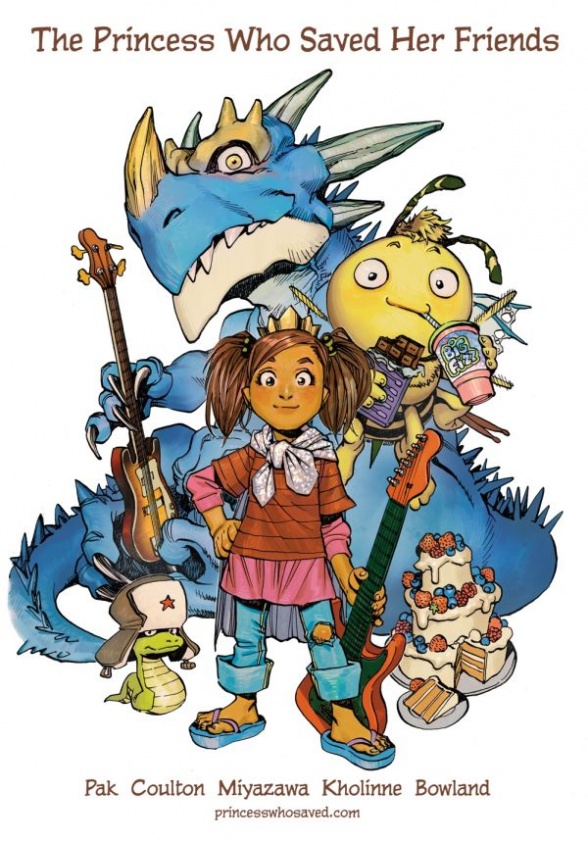 This is the third collaboration between the “The Princess Who…” team. How have things grown, in terms of a working relationship? Is there more of a shorthand between everyone now?

Greg Pak: It’s pretty awesome! I love everyone on this team and the whole experience is a thrill every time. But I’ll be honest — it hasn’t changed a whole lot from the beginning — from the time artist Takeshi Miyazawa sent in the very first concept sketches for “Code Monkey Save World” back in 2013, I knew we were onto something special. Every project since has been increasingly awesome. Huge shout outs to Jonathan, Tak, colorist Jessica Kholinne, and letterer Simon Bowland.

The story is about being in a band, which is sort of like being part of a comics creative team. What sort of a process do you two have for co-writing?

GP: Jonathan wrote the original song that these books are based on, so our heroine and her snake and dragon buddies and the witch first percolated in his brain. My job has been to take those characters and come up with that extra level to their journey to turn their story into these children’s books, with input from Jonathan every step along the way. And then in the end we go in together and clean up the dialogue together. It’s been a dream for me — Jonathan’s a fantastic creative partner and we’re always coming up with the best solutions when we talk. I also laugh harder than just about any other time when Jonathan and I get together, so it’s great for my cardiovascular system, too.

Jonathan Coulton: It’s so nice to be able to trust Greg the way I do. With “Code Monkey Save World,” it was really clear the he not only had a handle on the characters, but was great at adding details to their backstory, and putting them into challenging new situations and relationships. And same with these Princess books. We toss around some ideas at the beginning, and then he writes it and it’s pretty spot on. We polish together from there.

Takeshi Miyazawa is doing some absolutely incredible work on these pages. Greg, he has become one of your closest collaborators over the past few years. What is it about your relationship that clicks so easily? 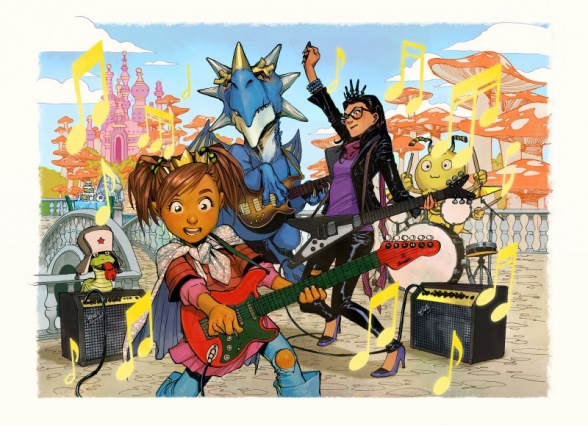 GP: I couldn’t tell you exactly why, but I kind of feel like Tak sort of lives in my head. He just gets every little nuance I write into a script. All the big, fun action setpieces, all the little character bits, all the emotion, and all the funny moments, big and small. I just grin when the layouts and pages come in — he nails it every time.

Music can be a tricky thing to incorporate into non-aural media. What has been your approach to making sure the book feels musical?

GP: The original “The Princess Who Saved Herself” book was in verse and used a lot of the lyrics from the actual song, so having that original song to set the beat helped a ton. With the sequel, we’re telling a new story, so we’re not using lyrics from the original song. But I think the rhythms are still there in the language. Jonathan’s definitely helping with that, too.

JC: I’ve come to realize that I’m toward the picky end of the spectrum when it comes to lyrics. I care a lot about meter, and syllable stresses, and rhymes. So one of the passes I made was just for the sound of it, which sometimes comes down to how it feels in my mouth when I say it. I have a lot of tiny edits in that stage that probably only I care about, but I want it to have the flow of a song when someone reads it.

After the success of the first Kickstarter, was there ever any discussion about going the more traditional publishing route? What are the advantages, from a production standpoint, of going the crowdfunding route?

GP: You know, we never really talked about it. I mean, I’ve definitely thought about the possibilities of finding a traditional publishing house for these books. But when push came to shove, we just knew we wanted to do this as another Kickstarter. It just made sense — we’d done two other record-breaking Kickstarters together and loved the experience. Going to a traditional publisher would certainly have taken a lot of work off of our hands in terms of logistics and distribution and whatnot. But we already had mailing lists of 11,000 people or so who had bought our earlier books. So we felt for this project, the most sensible thing would be to keep doing what we’ve been doing. 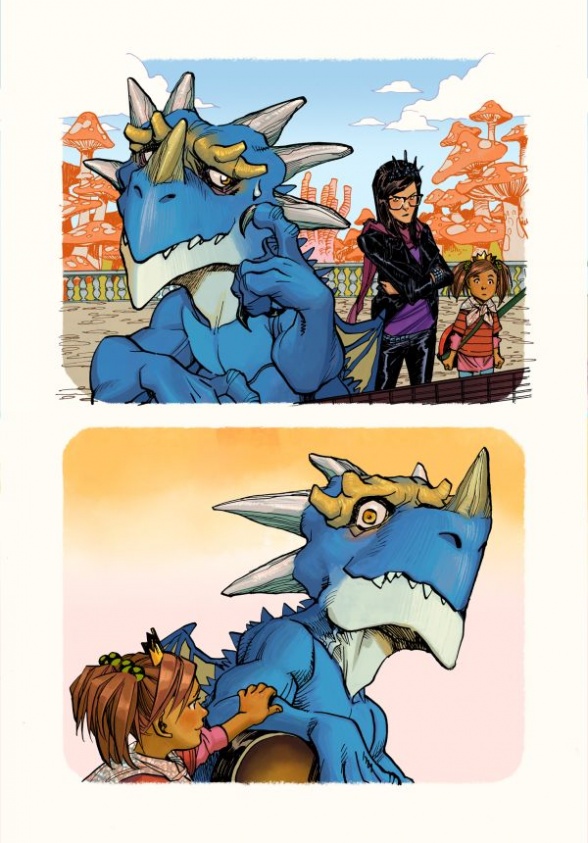 Both “The Princess Who…” books are about issues that come up in every kid’s life: sticking up for themselves and sticking up for their friends. I’ve got two small kids, and it is amazing how quickly various forces in their lives (school, other kids, etc) put them in situations where they need to really tap into emotions and areas of their lives that even adults don’t love dealing with. How present is it in your mind, when writing these books, that kids can see themselves in these characters? That’s obviously quite a change from writing, say, the Hulk.

GP: Weirdly enough, I don’t really think about the process any differently whether I’m writing about the princess or the Hulk. I’m just trying to get into the characters’ heads and hearts and tell stories that challenge them and matter. I mean, yes, I’m choosing a different set of words and scenarios when writing a book for kids. But whether I’m writing for kids or adults, I’m grappling with an emotional story and struggle that genuinely matters, and I’m never dumbing it down. Kids are smart and they’re grappling with this kind of stuff already — giving them books that deal with this stuff honestly is always a win.

JC: I think that’s such an important part of writing characters, really getting inside their heads and feeling what they feel. Whether I’m writing about a giant squid or a robot or an actual kid, I work very hard to see the world from their point of view. And you have to be a little brutal to your characters to make them really interesting – the world is a tough place, and that’s true in some way for every single one of us. When you find that particular thing, the part of the world that really hits your character in a soft place, that’s when you’ve found the good stuff.

Finally, if someone out there is on the fence about backing the project – especially as it is already surpassed its budget – give them one unexpected reason why they should press ‘the big green button?’

GP: One thing I kind of love is that our heroine is named Gloria Cheng Epstein Takahara de la Garza Champion. That almost sounds like a joke, and it can get a chuckle. But as a biracial person, I’m really happy to present a multiracial heroine here who’s just out there living her best life. The book doesn’t revolve around her race or identity, but it’s there. And I think it’s important for stories like that, stories that present multiracial people as protagonists and not symbols in someone else’s story, and above all stories that present the existence of multiracial people as just an everyday, normal thing. Normalizing folks of different backgrounds through fiction can be a powerful thing, and I’m happy to contribute in our small way to that enterprise with Gloria.

JP: I’m very proud of the kind of conflict and resolution we came to in this book, because it never comes down to a clear case of right and wrong. It’s mostly a mismatch of priorities between friends, so nobody is really the bad guy or the good guy. I think kids are a lot smarter than we all give them credit for, and I love the idea that they’ll hear this story and be able to see everyone’s side. It feels good to demonstrate a way to navigate difficult relationships that honors everyone’s perspectives.

Once again, you can back the project here.