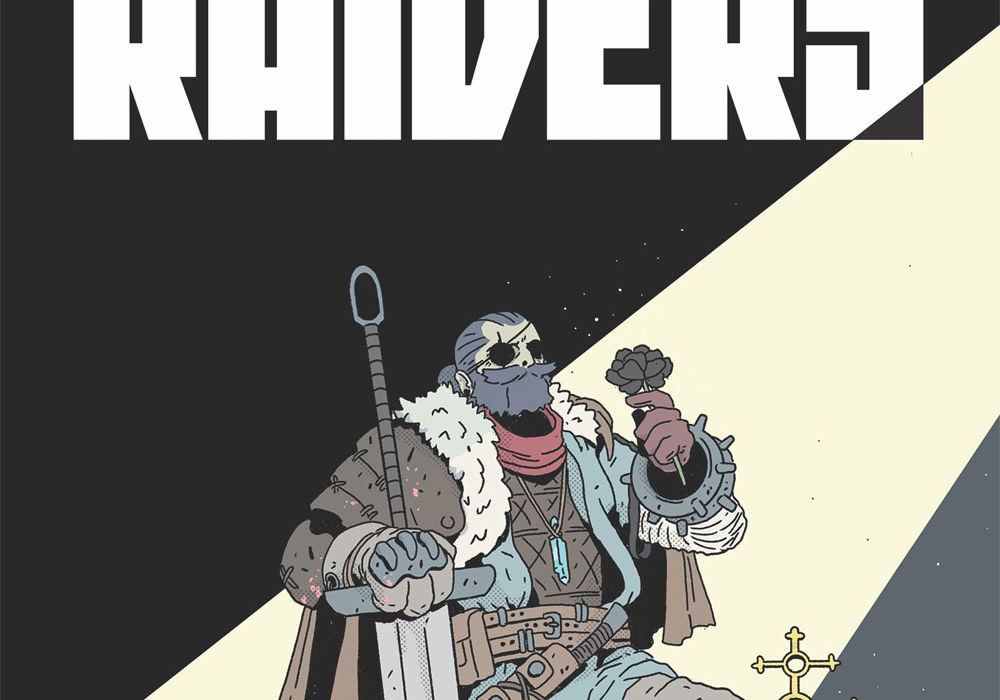 Some brothers play video games with each other or play sports or go to movies and then some others loot dungeons. The new graphic novel from creators Daniel Freedman and Crom and Dark Horse Comics, “Raiders” explores the lives of two brothers who choose to loot dungeons together.

“Marken and Maron, inseparable brothers, are dungeon raiders in a land ruled by corrupt royals and filled with fantastic dangers around every turn. But just as Marken decides that it’s time to give up the raiding life, both brothers find themselves at the wrong end of the powers that be and stumble upon a secret that may unravel the entire political system.”

A big thanks to Daniel and Crom for taking the time to answer our questions and be sure to look for “Raiders” in stores and online this month!

How did the story of “Raiders” and partnership come about?

Daniel Freedman: I started writing “Raiders” after a series of other projects collapsed on me. It was born from wanting to do something more human and intimate. Too often genre is looked at as purely spectacle, especially fantasy, and I wanted to tell a different kind of fantasy story. I’d grown tired of secret destined princes and simplistic evil villains. I wanted to do a fantasy story about how hard normal everyday life is. “Raiders” is the story of two blue collar dungeon raider brothers struggling to just get by in an oppressive corrupt world. I’d been following Crom on Instagram for about a year before I reached out to see if he’d be interested. I was beyond happy to hear he was. I couldn’t imagine a better artist for this project and had no idea what I’d do if he had said no.

Crom: I was taking a break from my self published comic “Golden Campaign” while working on various things when I got an email from Daniel with a very pro looking pitch that got me really curious. It wasn’t uncommon for me to receive scripts every now and then from writers wanting to collaborate so I had grown a tad jaded from reading them but when I read “Raiders” I just wanted to know more and immediately wanted to offer ideas and opinions on it. The more I found out from Daniel the more I knew “Raiders” was for me.

What was the thought of a graphic novel versus a monthly issue release in telling the story you wanted to tell?

DF: Originally “Raiders” was laid out as a 4 issue mini series. We had a very deliberate structure to it where the first and last issues were big decompressed single events, the big action set pieces if you will, while the middle two issues was where the story unfolded and lots of time passed. After discussing with Dark Horse, we all agreed a single graphic novel was the best approach since the story worked so much better in its entirety as it functions more like a movie than an episodic tv show.

C: I love the idea of a nice chunky book to immerse yourself in so I was excited when we decided to do it this way.

The story centers on the two brothers Marken and Maron. While set in a fantasy world with monsters and magic at the center it seems to be about the relationship of the brothers. Who are Marken and Maron and what can you tell us about their journey in the comic?

DF: It’s one million percent about the brothers. We are locked into their points of view and experiences. We see the world through their eyes. Marken and Maron are two working class dungeon raiders struggling to make ends meet. The story begins as Marken, the older brother decides its time to settle down just as the younger brother is starting to make a name for himself. But Maron isn’t the warrior his older brother is and when he gets in trouble, it’s up to Marken to save him. Things go from bad to worse fast and the brothers find themselves wrapped up in much more serious conflict.

C: Maron’s journey represents to me that need for adventure and impatience to grab the world when you’re young! While Marken makes me think of how experience helps you understand that sometimes things don’t pan out the way you want them to and you have to roll with the punches.

In addition to the more emotionally driven human elements of the story what else can readers expect in terms of action and goblins getting cut up?

C: Oh you have so many elements in “Raiders” that will give you that feeling of going through dungeons with fear of losing your loot while nervously and excitedly expecting what’s coming next. Final bosses, mini bosses, and more!

With any genre there is world building involved but fantasy has some of the best. How did you approach the look and feel of the world Marken and Maron inhabit? Did you build a lot of your own lore to help develop the narrative and visual design of “Raiders?”

DF: I think we started with Marken and Maron and let their designs inform the world in a way. We knew they were not top guys with lots of fancy armor and weapons. They have mis-matched pieces taken from various places, piecemealed together. They’re poor so they have to make due with what they can find.

C: I think with every piece of the story that got put on paper there were more opportunities to feed the lore of Raiders and it happened very organically as we worked on it.

To build off that a little Crom’s art is so insane in this book. How did you approach the art in this project? I love the choice to include more neon colors among the darker shadows of dungeons and violence.

C: My work is usually very focused on black and white so with “Raiders” I wanted to bring in a contrast of mood not only to the story in itself but to my inking using the bright colours and trying to make it a bit different. “Raiders” had to feel fun and exciting but not afraid to turn dark, bloody and gritty.

When the project was announced Crom was quoted talking about “When I first read the script, it felt like Raiders was the title I’d been training for my entire life” Given your experience with this genre in your other work were you able to experiment and try some things with your art for this project?

C: Absolutely! “Raiders” was so much fun to work on because I got to insert tiny details here and there to make it what it is, as well as exploring my world building skills through the art of the book. There are pages of just inventory and loot for the pure fun of it as well as interpreting characters in my own way such as goblins who are practically fantasy cannon.

For Daniel this has been solicited as your first published comic with solo writing duties. What was that experience like? Crom, how did he do?

DF: I’d been working towards doing my own stories for a while. It ended up taking longer than I hoped but I’m so happy and grateful to have arrived. That being said, my previous collaborators were all dreams come true and I aim to continue to work with them, namely finishing a certain vampire book…

C: Daniel is a very talented writer and Raiders shows you what he is capable of. Reading it reminds me of why I decided to take on the project.

An added benefit of graphic novels or collected editions is being able to include some extra content. I know you guys were able to build a pretty big extra section. What were you able to get in there and what do you think it adds to the book?

DF: When I was a little kid, I loved supplemental material. It was like this inside lens into the whole creative process. There were even whole books just about design and world building. I still have to this day the Aliens Space Marine Combat Manual. I told Crom to save every little sketch and design so we could compile it into something really cool. I think seeing the process really gives you a greater appreciation of how much work goes into a comic book.

C: I have always been a sucker for extra sections and process material in films and comics. Looking at the process behind these things gave me a new appreciation for the work done and a connection to the creator. Raiders comes with sections that show the process from script to full colour pages as well as early sketches of the main characters that looked a bit off and other characters who didn’t make it in the story or got cut out.

DF: Like you said, it was the obvious fit. The material fit with what Dark Horse is known for. They’ve also been awesome partners through out the whole process. Very happy to be part of the Dark Horse legacy.

C: What can I say? It’s Dark Horse! Some of my favorite artists have their titles with them and just the idea of having Raiders published by the same guys who do Hellboy or those deluxe editions of Berserk fills me with excitement.

What do you hope readers take away from “Raiders?“

DF: I hope readers first and foremost have fun. If the underlying themes and emotions resonate, I hope they can move a few people to appreciate their lives a little more. This story is about realizing what’s important in life.

C: I want readers to feel inspired and ache for adventures of their own, understanding that sometimes in life you stumble on to final bosses that seem impossible to defeat but when you do, the loot is so much sweeter.