Part way through discussing the process of collaborating with artist Sumit Kumar, colourist Vittorio Astone, and letterer Aditya Bidikar, on his new Vault book “These Savage Shores,” Ram V is interrupted by a man quietly asking if he was a famous graffiti artist from New York. Ram is not a graffiti artist, but he is the writer of comics like “Paradiso,” “Ruin of Thieves” and “Black Mumba.” I was talking to him on an unusually sunny September morning at the always wonderful convention NICE, in Bedford, England. We chatted about the new book, “These Savage Shores,” due next month from Vault Comics. We also discussed working as a part of writer’s studio White Noise, with Ryan O’Sullivan, Dan Watters, and Alex Paknadel and the recent announcement that he will be writing a Batman short. 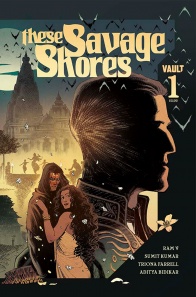 So you have a new book from Vault Comics, “These Savage Shores,” before we talk more, can you summarise what the comic is about?

Ram V: “These Savage Shores” is a story about vampires and colonialism set in the 1760’s on the Malabar coast in what is now modern day India. It begins with a European vampire travelling to India, on one of the first East India ships, but when he arrives there, he encounters legends and monsters, some of them far weirder, far older than he is.

You have some brilliant collaborators on the new book, what do they bring to the table and what does the process of collaboration look like for you?

RV: Well, I’ve worked with Sumit before on “Ruin of Theives” and really the most striking thing we did here was we put the whole story on a grid, not necessarily nine panels, but you can see the underlying grid on every page. My concern was that is was going to be restrictive for Sumit, but he’s found very interesting, very cool ways to take that structure and play with it. There’s this page where he reverses the reading order for three panels, and another page where he’s essentially taken three wide panels but split them into nine. So, that continues to be one of the most interesting bits of collaboration of the book. As for what Sumit brings to the book with his art– obviously the quality is amazing, but his strength is getting characters to act, which I think is really important with this comic. For instance, it’s really difficult to transmit someone being passive aggressive in a comic, so when the Indian Prince is in conversation with the Nobleman, and the Nobleman says ‘I’ve been made to feel at home’ and the Prince says ‘have you now?’ That expression on that panel is really hard to do well in a comic book but Sumit nails that each time. I think that’s really impressive.

In terms of the process. I send over the script, obviously it begins with that. Sumit gets it and does roughs — thumbnails really, which go to the letterer, Aditya. Because everything is on a grid, we have to be really careful about how dialogue is placed, and how much room there is, and if all the panels have enough room for the art and the text to sit beside each other. So, Aditya does a rough lettering pass through the thumbnails, and they go back to Summit. Then we get the pencilled pages, eventually they go to Vittorio, who is colouring the book.

I always have a really hard time finding the right colourist for a project, whether it’s bad luck or just an inability on my part, who knows? When we started with Vittorio, we needed someone who could really work with grey tones, which Summit uses a lot in this book, and when he sent me pages, I thought to myself ‘yes this guy knows exactly what to do with the book, I don’t have to tell him anything.’ Which in my mind is the best compliment I can pay to a colourist, because I tend to be very controlling of my books but I don’t necessarily know what the answer is. So, I always hope that I can find a colourist who knows, instinctively, what to do, and Vittorio’s that guy.

Continuing to talk about the creative team, the team is Indian, right?

RV: Mostly. Vittorio is from Europe. Italian, I think?  But Sumit, Aditya, and myself, obviously, are all from India. And I think that’s important. The fact that Sumit has the ability to go to these places is key. When we started talking about this book, he said, ‘I will travel to Mysore, I will look at the palaces before I draw them.’ I don’t know that he actually did that but it certainly helps to have someone who has walked through the kind of places that I’m talking about, and has an intimate knowledge of the history we’re talking about. The book, sure it’s about vampires, but also it’s an alt-history narrative so there’s real historical events and places portrayed within the story.

You are a part of a writers’ studio, White Noise, how does that impact your process?

RV: I think it doesn’t really do much in terms of the specifics. Obviously, we’re all there because we’re a peer group, and we’re all very good at what we do. But it helps when you’re working in a vacuum. The tendency is to emulate people who have been successful before. So, when you start out in comics, you’re wanting to write like Neil Gaiman, or like Alan Moore, or Grant Morrison. But eventually, you arrive at a point where you’re think, ‘I need to do my own thing.’ When you’re working with other writers, and you have an exchange of ideas, you get more confidence through peer criticism and through peer encouragement, I think you arrive at that point a lot quicker. I have a clearer idea of the kind of comics I want to do now, which I don’t think I would have gotten to if it wasn’t for Dan, Ryan, Alex giving me their opinion about the work I was doing. Sometimes it takes someone standing up and going, ‘Ram, you’re just trying to do a comic that reads like x, y, z, why don’t you do a comic that reads like you?’ When you get a comment like that, it makes you think. So yeah, that kind of real feedback helps, and we’ve done that for each other. We’ve sent each other scripts and edited each other at times. And I think it shows in the work, since we started White Noise, we’ve done two Image books, Dan’s doing “Sandman Universe” and “Lucifer” at Vertigo, I’ve got a Batman short coming out in “Batman Secret Files”, Ryan’s done an Image book and the Dark Souls series at Titan, Alex is working with “Kino” at Lion Forge. So, clearly there is a benefit to writers communicating with each other about the craft.

In both this new book and your Image book, Paradiso, an idea of place seems quite central. What is it about place that interests you so clearly?

RV: Yes, even if you look beyond those books, “Black Mumba” is about Mumbai, “Grafity’s Wall” is about Mumbai, so clearly, I have a thing with places, but I don’t do it very consciously. I don’t tell myself, ‘yeah, I’m gonna make this about place,’ but I think it’s inherent to the kind of stories I want to tell. I suppose because my writing is informed by the fact that I used to travel a lot. And it struck me as a thing of beauty that we can be so different in terms of where we come from and still worry about, still have the same dreams, as people half way across the world. That kind of resonance, of stories being flavoured by the places they come from has been an important part of my life, so I gather from that that it’s probably an important part of my storytelling.

The first issue focuses on an English vampire travelling to India, but, trying not to spoil anything, by the end of the issue it feels like he might not be the protagonist of the whole book. Where did this decision to open with that English perspective come from?

RV: Part of it is an instinctive choice, but when you’re writing, you find ways for the story to have forward momentum. At every point in the story, you never want to let the reader get comfortable. The reader should feel like they’re a part of the narrative so they don’t feel displaced, but you never want them to get a point where they think ‘oh yeah, I know what’s going to happen.’ I suppose, the end of issue does wrong-foot the reader, because you assume things are going to go a certain way, and then when that last bit gets there and you think, ‘wait, I didn’t see that coming, what’s going to happen now?’ And so, part of it’s that element of surprise and not letting the reader get too comfortable. The other part, obviously, is now you’re asking the question, ‘who is the protagonist?’ which is a reason for people to pick up issue two, and at the end of issue two, you’ll be asking a different question. So, part of it is the mechanism of how the story works.

Also, there are all these writing prescriptions, you have to introduce your main character on the first four pages, you have to give people a reason to like him. You don’t have to do any of those things, as far as I’m concerned. There’s ways to make stories work interestingly if you understand why people continue to read a story. So part of it’s also rebelling against that kind of prescriptive, formulaic stuff.

Just to end, DC recently announced your involvement in a Batman book, is there much you can tell us about that?

RV: There’s not very much I can tell you about that, because I can’t talk about it until the book’s actually out. But I can say I’m very excited that I got a chance to work on that. Someone just pointed recently that I might be the first Indian author to pen a Batman short, which is very cool, and I’m happy to see more people like me given the opportunity to do stories like that, because I think superheroes need to evolve and encourage participation from the rest of the world.