Tomorrow sees the release of a new ‘comiXology Originals’ comic, “Field Tripping.” Written by James Asmus (“Quantum and Woody,” “Evolution”) and Jim Festante (“The End Times of Bram and Ben,” “Rick and Morty Present Mr. Meeseeks”) and illustrated by Jose Garcia (“Yumiko: Curse of the Merch Girl,” “Heavy Metal”), the series focuses on a school class that goes above and beyond the, shall we say, normal mean of teaching. 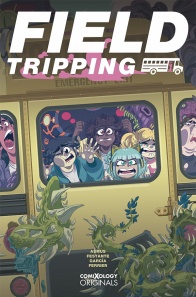 What better way to learn about the seasons than travelling to a world that cycles through all of them in ONE DAY?

And what better way to learn about the cycle of life than to get attacked by man-eating plants?

Actually, there are MUCH better ways. But Mrs. Flubbins’ class are about to learn that the HARD way.

Part of the comiXology Originals line of exclusive digital content only available on comiXology and Kindle. This title will be available as part of comiXology Unlimited, Kindle Unlimited, and Prime Reading.

Both to celebrate the release of the first issue tomorrow, and to welcome our young readers back to school, co-writer James Asmus has put together a ‘back to school reading list’ for Multiversity. He picks some gems, so make sure to pay attention and take notes. And, of course, to pick up the first issue of “Field Tripping” tomorrow at comiXology.

Written for Multiversity by James Asmus

It’s Back to School time! And even though I’ve been mercifully free from homework for years now, the combination of writing a school-based disaster comedy (“Field Tripping” – launching Wednesday on comiXology!) and aisles of Trapper Keepers and backpacks have been bringing back vivid memories.

But while I mostly enjoyed the years of learning, I also clearly recall all the ways I tried to sneakily deal with the boring parts. Filling notebooks with superhero drawings, fiddling out epic battles among tiny dinosaur erasers, and of course, the classic – sneaking in comics that I’d rather be reading.

Whether you tried the same, but failed, or if you’re looking for tips on how to smuggle more comics into the classroom – here are my tricks and recommendations:

COMICS COME IN ALL SIZES 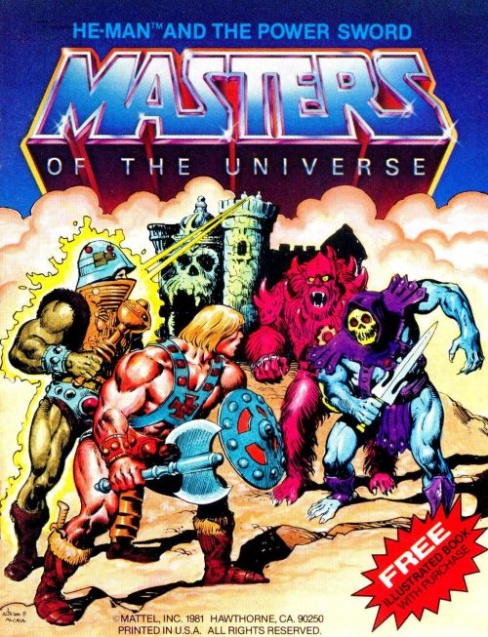 A mini comic from the Masters of the Universe Toy Line

Sure, sometimes you’ll have a textbook big enough to hide an issue in (in my case, usually an old “Excalibur” I bought from the quarter bin). But if your least favorite class doles out a too-small tome – don’t fret! Switch to MINI COMICS!

For me, it meant more time with the “He-Man” and “Super Powers” minis that came packed-in with my toys. (Which you can still find on eBay or flea markets.)

But you can also snag great minis from a local shop’s zine rack, artist’s online stores, or hit artist alley the next comic convention to stock up on tons of great self-published pieces. (I recommend Marie Enger for one.)

I know this might cause some collectors a heart-attack, but one way to make comics easier to sneak is to stop treating them like precious pieces to preserve. If you’re willing to fold, roll, or rip out a few pages, it opens up whole new worlds of sneaky techniques.and hiding spots.

As a kid, my most successful technique by far was to scroll my comics up from inside my desk to under my book. If the teacher decided to walk down the rows, suddenly, a simple nudge of the workbook could cover my tracks.

A re-enactment. Also, since this is fine print; neither Multiversity nor James Asmus are responsible for any detention, expulsion, or other punishment that may result from attempting these stunts.

And what’s more important, a better CGC grade or escaping a classmate’s awkward report for a world of four-color action?

In a modern classroom, of course, all this might be easier if you’re working on Chromebooks, iPads or any other new-fangled gizmos. Then I can simply shake my fist at the clouds about how easy you kids have it these days, while you open up a secret tab to read practically ANY COMIC EVER MADE! 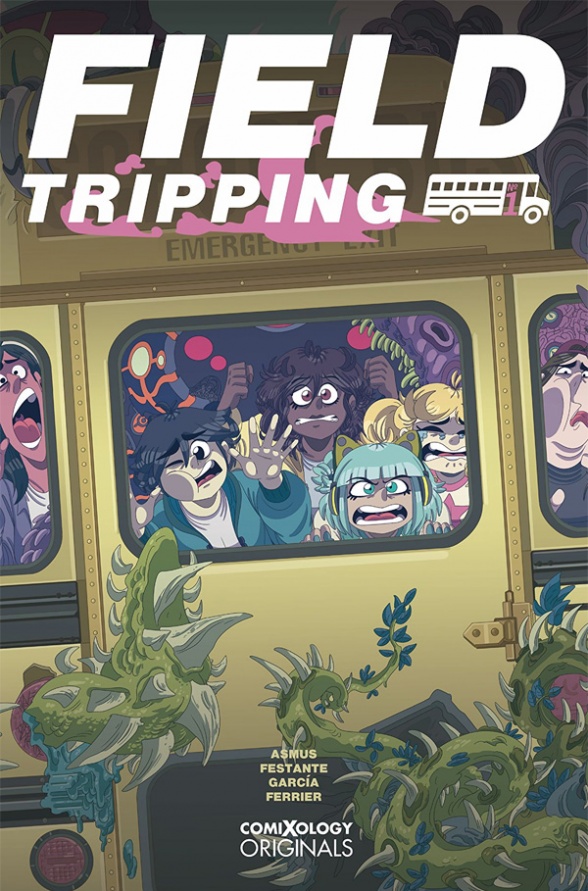 Still, if that’s the case, let me humbly suggest the brand-new, creator-owned comic my collaborators and I just made for comiXology Originals – “Field Tripping!” It’s a sci-fi dark comedy about some kids who also wanted to escape class for something more exciting – and all the twisted disasters that came next. It’s a book we consciously crafted to be ‘all-ages’ – but that still feels like you’re getting away with something by reading it.

Of course, when you’re done with our book, comiXology houses almost any other comic you could want. But as they’re also only available there, I’d also recommend “Goliath Girls,” “Stone King,” and pretty much any of the other Originals line.

You should also cross over to Webtoon and find every genre, flavor, and style of comic doled out in shorter weekly installments. (Perfect length for drowning out whatever lecture that you already read as homework.)

Maybe the best way to get more comics time in your (or your kids’) classroom – advocate for including comics in the class!

Even in my high school and college days, I had a fair amount of success lobbying to use comics instead of traditional sources for my book reports or other projects. And cultural appreciation of comics and graphic novels has only grown since then.

Plenty of teachers are interested in possibly adding comics into the curriculum, but just don’t know where to start. Be a great comics ambassador and start the year by recommending titles that might fit the class!

Not only are there some proven heavy-weight series for younger readers (“Dogman” is my son’s favorite), but publishers like ONI, IDW, :01First Second, and more continue to develop fresh, smart new comics that excite and respect readers of every age. 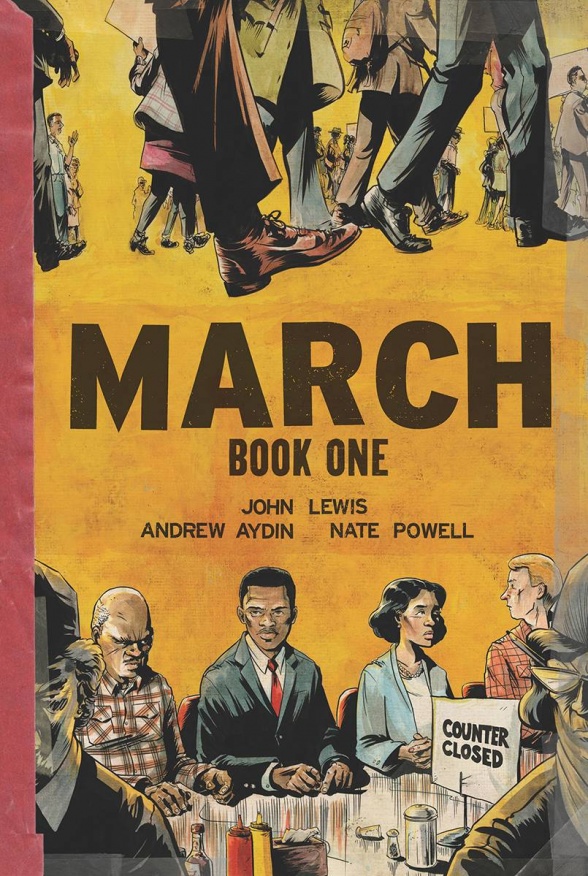 Plus, smart teachers everywhere should jump at the chance to spice up their non-literary classes
with some modern comics excitement (I’m looking at you, Science and History…). 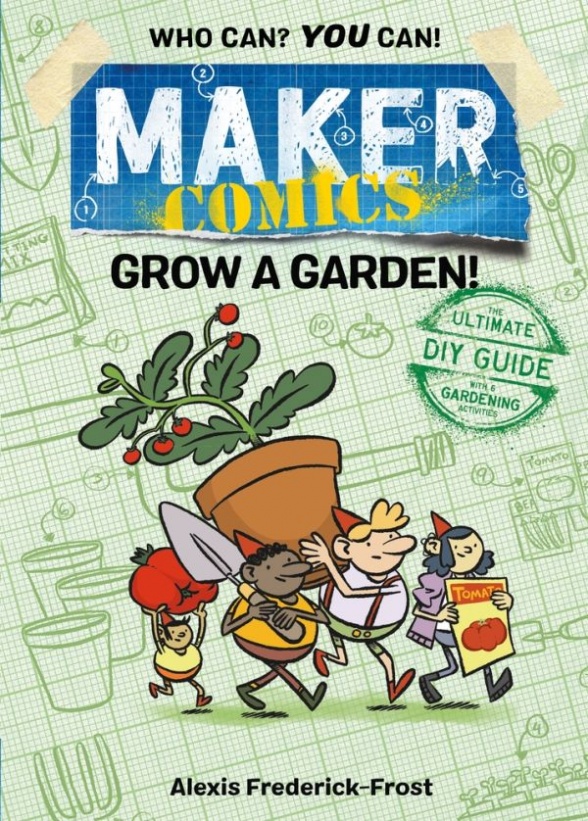 Finally, I should make clear that none of this was anti-school. I’ve actually loved learning anything new my whole life. My comics smuggling was an attempt to fend off boredom when we were stuck reviewing something I already knew or understood.

And part of why I loved comics is that they always introduced me to new concepts, scientific principles, and crazy vocabulary. (Special thanks to all the mad science supervillains, desperate to monologue about their genius.)

And now that I’m an adult, non-fiction comics have become one of my favorite ways to keep learning. Whether it’s the social-political reporting of Guy Delisle, modern sex education like “Oh Joy Sex Toy” or Oni’s recent “Quick and Easy Guide to Queer and Trans Indentities,” or hilarious explainers like Fred VanLente & Ryan Dunlavey’s “Action Philosophers” or “Comic Book History of Comics.” There’s an embarrassment of riches, whatever your interests.

So even if you’ve finished your academic obligations – maybe it’s time to flip things around, and let comics smuggle you some schooling?

What about YOU? Did you smuggle comics into your class? Or did you have to sneak ‘em past your parents at home? What are your tips, tricks, or stories of getting busted?

Or do you have a favorite comic to get kids you know excited to read, or hooked on comics in general?