When you think of the Grim Reaper, what do you think of? Probably a long cloaked skeleton guy with a giant scythe, ready to take the souls of anyone and everyone in his path. Sarah Graley has a different vision of that. In “Kim Reaper,” being a reaper is just another gig that you do to get through school. There’s much more to it, of course, and we had the chance to talk to Graley about that. 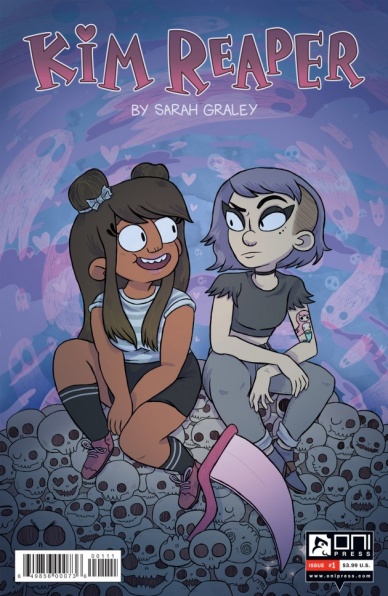 For those just hearing about “Kim Reaper,” how would you describe the book? What’s the basic premise?

Sarah Graley: Becka and Kim are both university students – Becka has a huge crush on Kim (who wouldn’t, she’s a gothic dreamboat!) but Becka doesn’t really know much about her, especially the fact that Kim is a part time Grim Reaper! The series follows the duo navigating Kim’s complicated and confusing profession, through university and the Underworld. I would describe the series as fun queer spooky and cute adventure!

“Kim Reaper” is one of the most unique takes on the Grim Reaper I’ve ever read; how did this idea come to you?

SG: Baby teen me thought being a Grim Reaper would be neat – not the ghoulish death part, but the whole you can portal anywhere with your scythe/immortality thing! I lived right be a cemetery and was terrified of zombies, so if I couldn’t sleep at night I’d dream about being a Grim Reaper (can’t die in your dreams if you’re death!). It sounds kinda silly now – but it’s what gave me the idea for “Kim Reaper”!

The first issue is really fun despite dealing with death. As you’ve developed this series, has it been difficult straying away from going too dark given what Kim does?

SG: Although Kim is a Grim Reaper, I think the comic overall is quite sweet and goofy rather than dark and grim! Kim’s profession does guide the narrative, but the comic is more about Kim and Becka’s dynamic. Issue 3 is pretty dramatic and issue 4 has some real gross stuff, but at the forefront the story is all about Kim and Becka getting to know each other in a really weird situation.

“Kim Reaper” is drawn and written by you; could you talk about the planning of each issue? Do you allow yourself to change things on the fly? Does anything get scrapped once you start getting into things?

SG: Usually when I submit something we lock into it, unless me or my editor Ari see that something could be made better, and then we’ll revisit! We obviously want the comic to be the best it can be, so if there’s a chance to tighten it up I’m onboard! I work on the comic in chunks, so my process is script, pencils, inks and colours. Because of this, whenever I start a new chunk of the process, I’m usually coming back at it with fresh eyes and can spot minor faults which I’ll just fix on the fly! Like… if someone’s head is really big or something. It happens! 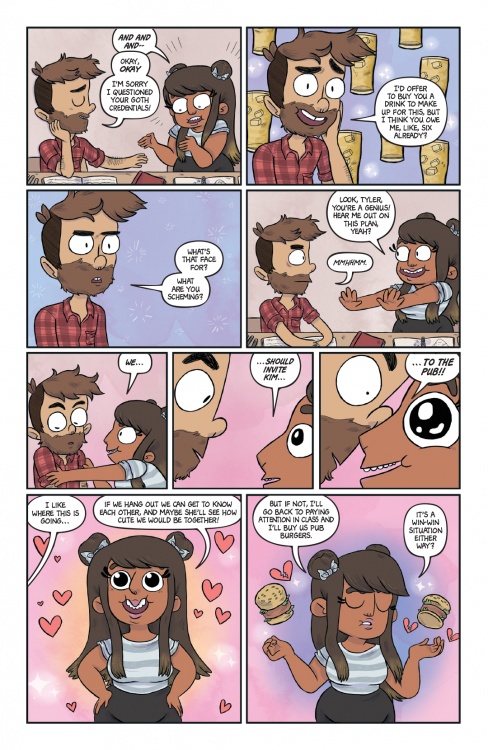 Becka and Kim have really different personalities, and we’re jumping into this story with Becka having a crush on Kim. Could you talk about how we’ll see this new sort of friendship develop? Did you base either of them off of real people in your life?

SG: Kim and Becka aren’t based on any real people, but I relate to Becka and when I write her I tend to choose her actions on what I would do if I was as bold and brave a character that Becka is in this story! There are a lot of cameos of my friends in the series, too. Kim and Becka have a bit of a rocky start, but crushing on a Grim Reaper is complicated business! Luckily they have this series to hopefully figure it out.

You waste no time getting us deep into what Kim actually does, but we don’t see if she has any special powers that come with being a reaper. Does she have a little something secret up her sleeve?

SG: There are totally perks to being a Grim Reaper that Kim opens up to Becka about because otherwise I think it would maybe be the worst job? Dealing with death is totally depressing, but the benefits balance it out – at least, in Kim’s opinion!

Lastly, what can you tease about future issues?

SG: More muscles, sunken ships, DRAMA, parties, and death death death! But like, also a bunch of real cute stuff. I have got you guys covered for your drama and cute stuff fix.

“Kim Reaper” #1 is out this Wednesday, April 5th