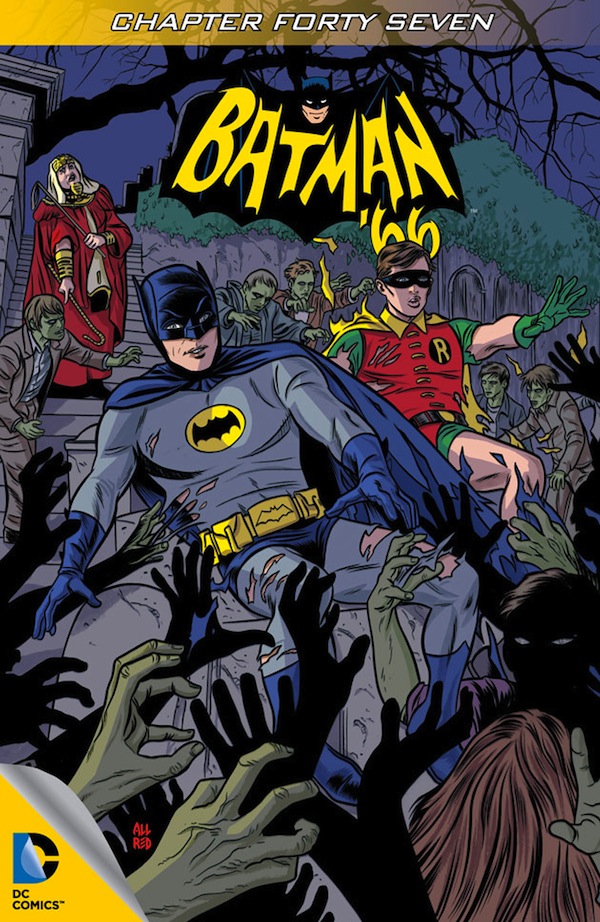 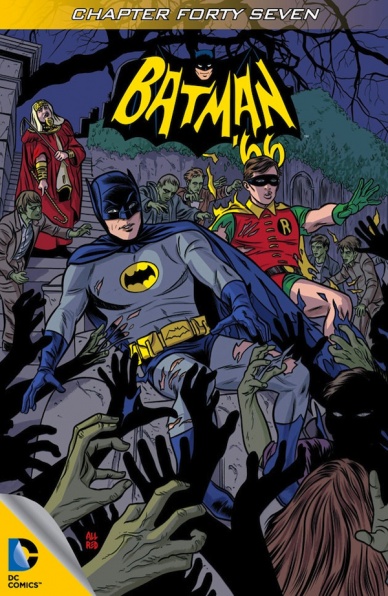 Starting with yesterday’s Chapter 47, artist Scott Kowalchuk (“Down Set Fight,” “The Mysterious Strangers”) joins writer Jeff Parker on “Batman ’66,” working with one of the most fun characters to come out of the series – King Tut! We talked to Kowalchuk about his work on the series, what attracted him to drawing the book, and who he would choose of all the ’66 Catwomen.

Scott – “Batman ’66” has been a property that has been flush with great artists, all of whom seem genuinely excited to draw these characters in this particular style. What is it about “Batman ’66” that attracted you? Were you a fan of the shows growing up?

Scott Kowalchuk: The varying art team has been one of my absolute favourite aspects of the series. It really is reminiscent of the rotating Special Guest Villain every week on the TV Show. Every artist brings their own unique vision, ability and voice to these characters, which, in my opinion, adds so much energy and vibrancy to “Batman ’66.” That’s definitely been a huge attraction to the book and series for me. All of that is , of course, due in huge part to Jeff Parker’s beautifully articulated concept for the book. Even though the art team changes, Batman & Robin & the Rogues all still distinctly sound like Adam West and Burt Ward. Jeff has a real sharp ear for creating a written interpretation of these characters.

I grew up on the series. As a child the TV Show entertained me, and as I grew into adulthood the show inspired me as I studied Illustration in college. Batman ’66 has been a part of my life for the better part of two decades.

You get to work with one of the most iconic and unusual Bat-villains, King Tut, a character that very much can encapsulate the aesthetic of the show in one package. What, visually, did you want to make sure made the jump from the screen to the page? 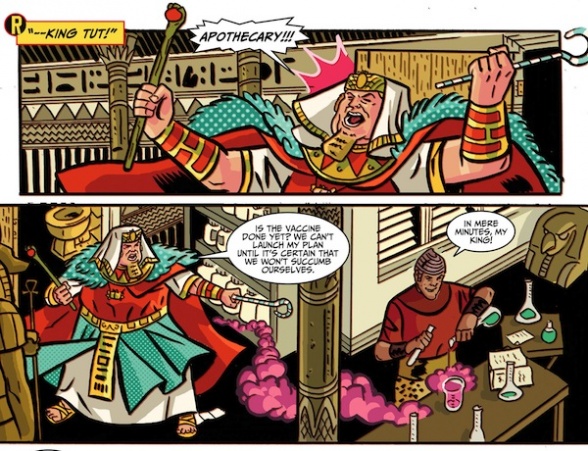 An excerpt from from Batman '66 Chapter 47

SK: Oh, I completely agree. King Tut (and Victor Buono) really does reflect everything about the TV show I love. From his moments lamenting and crying when a plan failed to his off-the-cuff blowing his lid over small indiscretions, Buono really explored a full range of emotions with King Tut.

For me, Tut was always bright, colourful, loud and very over the top…which is why I so love the character. When drawing Tut I really tried to capture Buono’s manner. I didn’t want to just draw a representational image of the character, I wanted to try and capture the late actor’s spirit. Buono was wonderful, from big to subtle, he created something very special in Tut.

Jeff Parker has been doing such great work on the series, really nailing the tone of the show, and adding a healthy dose of humor to the scripts – what has it been like working with Jeff? What makes him the perfect guy for this gig?

SK: Jeff’s great. He really has a love and appreciation for the essence of the TV Show, which is so very apparent in the “Batman ’66” comic series. Jeff has really captured the Batman ’66 ‘Camp’ in the series and, like the show, plays it straight. Which is something Adam West always did. Playing the humour straight makes for some really genuine laughs.

This issue, interestingly, has zombies as a key component. Is it difficult to illustrate something that is clearly supposed to be scary, yet has to exist in the, somewhat, sanitized environs of the TV-Bat-verse?

SK: Of the era I can think of Night of the Living Dead and The Last Man On Earth (my favourite movie!) where zombies were represented. Those versions were scary, but if you put those same actors in that same make-up on the bright and colourful set of Batman ’66 a viewers perception of them would have to change. Are zombies still scary in the Batman ’66-verse? Sure. Zombies are wildly scary no matter what. But given the source material in which they appear the edges are softened, which is the real joy in the Batman ’66-verse for me. You can get away with zombies that aren’t grotesque and horrifying!

One of my favorite aspects of your work is its versatility, and so when I saw you were working on “Batman ’66,” it wasn’t a big leap to see how your style would fit. What was the biggest thing you had to do, personally, to bring your style to that world?

SK: Aw, thanks, I really appreciate that.

While I was studying illustration in college the TV Show (and many others from the 1960s) influenced the personality I tried to infuse into my work. The bright and colourful world, with larger than life characters and sets are something I still keep in my mind’s eye while drawing and creating comic books. It’s an interpretation of reality I still very much cherish and try to capture.

For a good long while I always struggled with colour application. I loved the colours of 1960s TV, but there wasn’t always a consistency with them. The colour of the 60s TV world was turned up to an ’11’ and while I adored it, I didn’t know how to capture it. It took years of study and practice to try and better understand how to apply lots of colour, but in a complimentary way. That was the biggest challenge for me on this issue: keep myself from going overboard, but still creating a strong visual representation of the show. 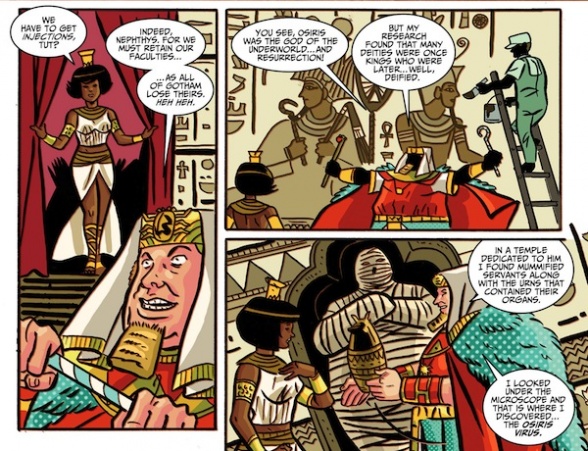 An excerpt from from Batman '66 Chapter 47

Finally, the most important question to ask any “Batman ’66” artist: which Catwoman would you feature, given the choice?

SK: Until Jeff had the brainstorm to make Lee Meriweather’s Cleopatra into a villain in the comic (still my favourite moment of the series), I would have said Lee Meriwether. I adored her out of costume as Miss Kitka in the movie. Those scenes of her and Adam in the carriage, then in the Penthouse…come on! Best part of the movie, in my opinion. “I’ll slip into something more comfortable while your cocoa is warming.” *swoon*

Bonus points for if you’d rather have the John Astin Riddler over the Frank Gorshin one.

SK: Ha! Funny you mention John Astin’s Riddler. His episodes were, I think, the best written of all the Riddler episodes. So much so, that when I needed to provide some test pages to Jeff and DCI focused on Astin’s Riddler! Had it not been for Gorshin disappearing into the role I think Astin would have made a terrific recurring Riddler!

You can pick up Scott’s chapter, and all chapters, of “Batman ’66” at comiXologoy