“Art Ops” is one of the few Vertigo books of the past couple of years that would have felt right at home on the imprint at literally any point in its existence. The book has a mix of whimsy, crime, and high art that really sets it apart from just about everything else on the stands.

As the second arc begins, I spoke with writer Shaun Simon about the series and, specifically, the familial dynamics at play. 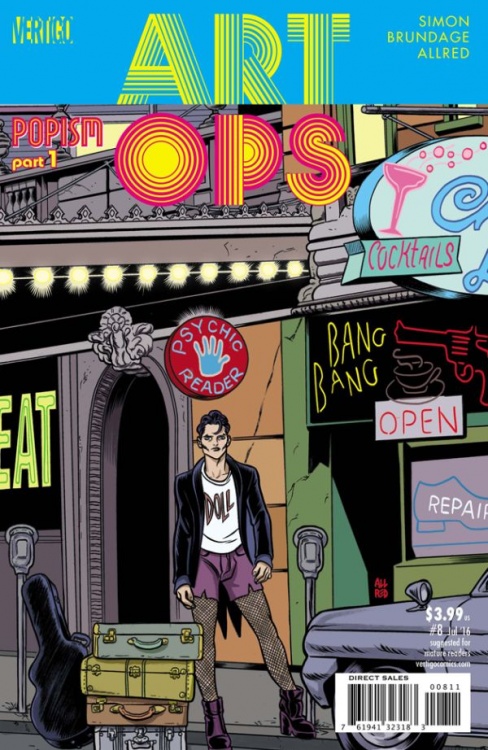 The last time we spoke about “Art Ops,” the book hadn’t even launched yet. Now, you’re about to drop #8 on the world. How has the reaction to the book been, in terms of what you expected versus what you got?

Shaun Simon: Like a lot of people, the Vertigo books are what made me want to get into writing comics. A lot of the responses I’ve seen are from people praising the book for being the type of Vertigo book they have been wanting. Vertigo has always been a place for experimentation and have been willing to take risks on new ideas. I’m honored to be a part of it.

Comics are, obviously, a visual medium, and this is a story that is very much rooted in visual art. As it goes on, are you finding it easier to translate your words into visual cues, or do you find yourself relying on Mike Allred and the other artists to do more of the heavy lifting in that way?

SS: I try to keep my scripts lean and keep direction to a minimum. If something is more abstract in the script, I try to find a way to describe it in mundane ways. Mike is a brilliant artist, as are the other artists I’ve worked on with this book, and they all put their personal spin on things. It’s fascinating to see them translate what’s in my head to the page.

The second arc on the book is starting, and Reggie has become a pretty fully formed character. We’ve just now met his father; how is his dad going to impact this story?

SS: Danny Doll, as we saw in issue 6 and 7, is quite the opposite of Reggie’s mom, Gina. While Gina values humanity over anything else, Danny is on the arts side and would rather save a painting than save a human life. Reggie never knew his father and Danny isn’t what is expected when one thinks of a “dad”. He puts Reggie is a tough spot and a spot that keeps getting stranger as a group, hellbent on keeping art innocent, sets their sites on Danny. They also believe he is not what a father figure should be but will take drastic measures to fix that.

How does Reggie’s relationship with his parents differ from one another?

SS: Gina raised Reggie from birth, granted she had a job and couldn’t be waiting for her son with milk and cookies after school everyday; she did the best she could. Danny was nonexistent. I feel as though fathers have this strange sort of power over their children. The mom is, for the most part, the one who tends to the family, while the dad can come and go as he pleases. Somehow the mom is usually the one to take the brunt of the shit the kids dish out and the dad is the one they always hold on a higher pedestal. I’m not saying it’s right; it’s just what I’ve seen. Reggie falls in the same boat. He is more willing to hear his dad out and give him the benefit of the doubt when he strolls into his life.

This arc also features the Chelsea Hotel, an important setting in downtown NYC culture, both visual and musical. What did you want the Chelsea to do for this story? Why is it important that the story is set there?

SS: The Chelsea Hotel was a mecca for creativity. Artists, musicians, writers…there was a period where they filled the rooms of the hotel and turned out masterpieces. It was before my time, but I like to think of it as a home base where the creative types in New York would go and feel welcome among each other. I imagine Warhol, Burroughs, and Dylan running ideas by each other over breakfast. I needed a safe place for Danny to bring works of art to and the Chelsea Hotel seemed like the perfect fit.

It is so cliche to say that New York City is a character in a story, but that’s certainly true here. Could “Art Ops” have worked in Paris, with the Louvre? Or in Chicago, with the Art Institute?

SS: I’m sure it could have but I grew up on the outskirts of NYC. It’s what I know. New York is as iconic as it is strange and it seems only fitting for a place where famous works of art can roam the street and blend in.

Finally, what piece of art have you wanted to incorporate into the book that you haven’t been able to just yet?

SS: I love the idea of a piece of abstract art out in the subway tunnels – something you’d get a glimpse of out the windows as the train speeds through the darkness. Who knows what it’s doing there or what it wants? Who knows what it would look or do like if it decided to sneak out and blend in with the city above? Maybe it would just want be normal and get a cup of coffee but it’s been cursed with bright colors and no real shape. Things like that interest me.