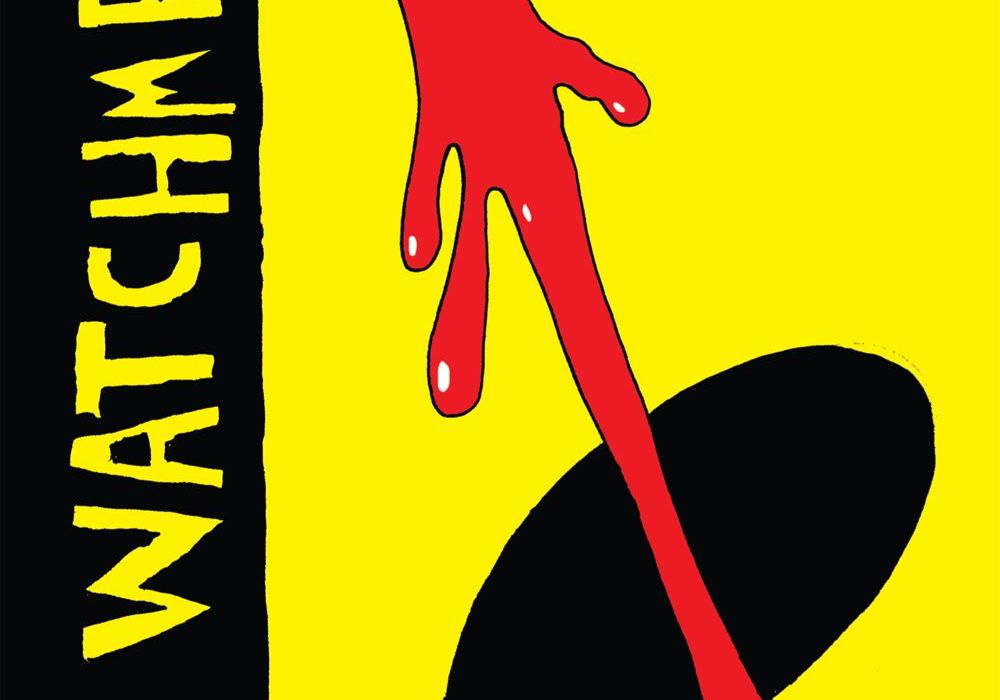 For many Alan Moore and Dave Gibbons’ “Watchmen” is considered one of the most ground break works in the history of the comic medium. Then there is “Shitty Watchmen.” Published by creators Dave Baker (“Action Hospital,” “Fuck Off Squad”) and Nicole Goux (“Fuck Off Squad,” “This is Not a Girl Band”) with Protein Press, “Shitty Watchmen” is a “formalist exercise analyzing the language of comics as utilized by Alan Moore and, more importantly, Dave Gibbons.” With a group of 11 creators (Dave Baker, Nicole Goux, Rachel Dukes, Malachi Ward, Nick Diaz, Emilie Vo, Sam Ancona, Chuck Kerr, Colby Bluth, Robert Negrete, and Sabrina Deigert) they set out to examine the composition, layouts and panel work of “Watchmen.” To do this they deconstructed the work into “shitty drawings.”

We were able to talk to Dave Baker about the project. We discussed why they chose “Watchmen,” how the 11 made the book, what they learned and much more. You can purchase the complete “Shitty Watchmen” at Dave’s website and read and view the pages at their Tumblr here. 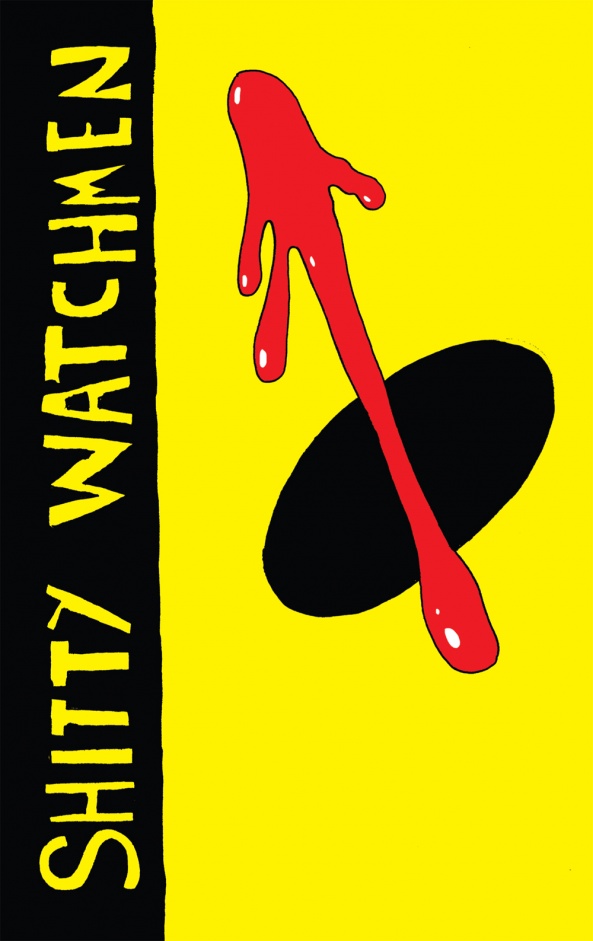 Why “Watchmen”? Why shitty?

Dave Baker: My stalwart creative compatriot Nicole Goux had recently read “Watchmen” for the first time and was marveling about how amazing Dave Gibbons’ compositions were. The topic came up at a party, and a running joke started that Gibbons’ compositions were so strong that even if you redrew them in the shittiest way possible they would still read and communicate. Ultimately, our book “Shitty Watchmen” is both a study of a master work and an attempt to deconstruct it, and also a statement about how important Gibbons is to the project. Not taking anything away from Moore, who is a genius, but Gibbons is the reason the book works. He masterfully uses composition to communicate the narrative. And he doesn’t seem to get any love for it, which is a shame. Plus, the juxtaposition of the most complex comic book ever made and the crudeness of some of the artwork is inherently interesting I think. If you’re looking at it from a formalist comics perspective, it’s undeniable how important Gibbons was. Also: it’s fucking stupid and funny to redraw the whole book panel for panel.

How did the production of the book work out? Were creators able to pick their segments?

DB: Most of the people that are in the book were at the party where the joke started. It evolved quickly from a ‘it would be funny if we did this’ to a ‘we should do this in two weeks. The only real rules for production were make them shitty drawings and try to keep it to one or two words per balloon. But everyone did something a little different. It’s really interesting to see Gibbons’ work refracted through everyone. My loose, more gestural approach is completely different from say Rachel Dukes or Chuck Kerr who kept it really really tight. The complete list of artist involved is Malachi Ward (“Ancestor,” “Prophet”), Rachel Dukes (“Frankie Comics,” “Stephen Universe”), Nicole Goux (“Fuck Off Squad,” “Suicide Forest”), Nick Diaz (“Logan’s Run,” “Domino Lady/Sherlock Holmes”), Sam Ancona (works in animation), Chuck Kerr (“Melt-thology”), Colby Bluth (“Cellular Division”), Emilie Vo (“Eternal Youth”), Robert Negrete (“Action Hospital,” “Captain Omega”), and Sabrina Deigert (“Action Hospital”). And then me, of course. I drew issues one and twelve.

Are they any changes in the book?

DB: The only difference between our book and the actual “Watchmen” is that we didn’t draw the supplemental materials like the fake ads, essays, and book excerpts. We just did the sequential pages. Although, that’s not quite true. Rachel Dukes did her back matter pages. The rest of us didn’t because it was hard enough to make thirty-something shitty drawings. Rachel is a beast. She went all in. 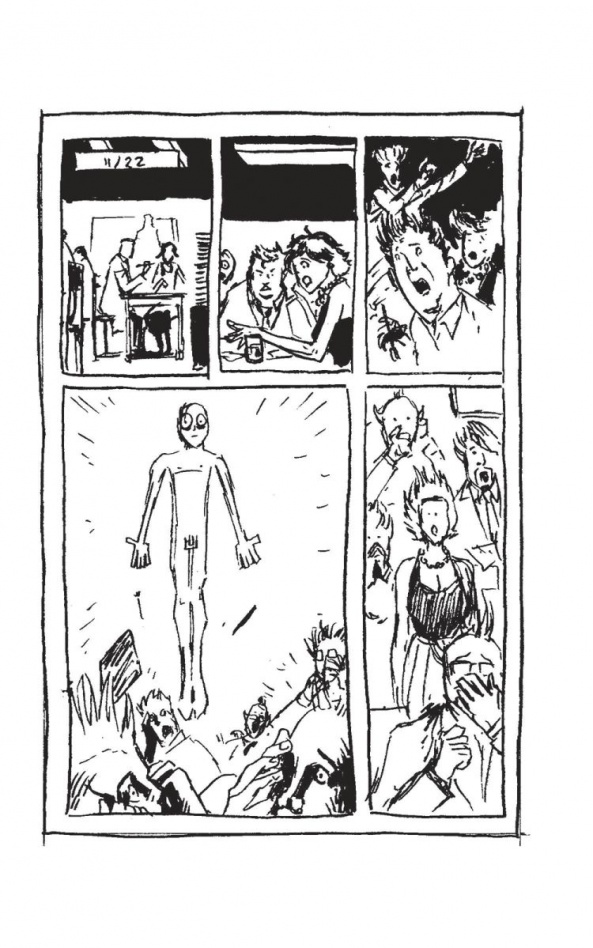 This looks like it was super fun. Was it?

DB:: Yes, very much. Very, very fun. I love making comics. I love being around creative people. And I’d much rather hang out and draw stupid things then just about anything else. Also: the book is called Shitty Watchmen? How could that not be fun?

What did you actually learn redrawing Gibbons’ work?

DB: Everybody took something different away, I think. The conversations while we were working were almost as good as having a book. Every five minutes someone would be like “Oh, fuck. Have you guys ever noticed this?”

For me, it was how he drew full figures in nearly every panel. That’s insane. Fucking insane. He also takes the hard road every time. If there’s a scene where someone is walking, he doesn’t do a close up, he does a wide and draws everything. He always draws everything, which is just mental. I don’t know how he survived this process. Also: the way he spots blacks is really interesting. He layers a light and a dark and a light shape fairly consistently. This isn’t a revolutionary artistic practice, that’s what they tell you pretty early on. I guess you could say you want to ‘make a sandwich’ out of lights and darks but he picks the strangest and most difficult ways to do it. He’s a goddamn master.

For anyone that picks it up what do you hope they actually get out of the work?

DB: Honestly, I want more people talking about how what DC is currently doing wrong. They only have the rights to the “Watchmen” because the contract was super lame. They presented it to Moore and Gibbons as a creator owned book. And when it went out of print it would leave DC and revert to them… and then the rest of the story happened. I get it, Alan Moore isn’t a perfect person and I don’t agree with everything he thinks, but I think that if DC is going to keep the “Watchmen” perpetually in print in order to keep it… they should at least be more respectful of it. Using them in the DC universe is really lame, in my opinion. I think that, for me, this project was two fold. One, it was a political statement about how this is the most important comic work of the last 50 years and we should all treat it as such, and also to make something dumb. By reducing it, my hope is that it showcases how magnificent it is. 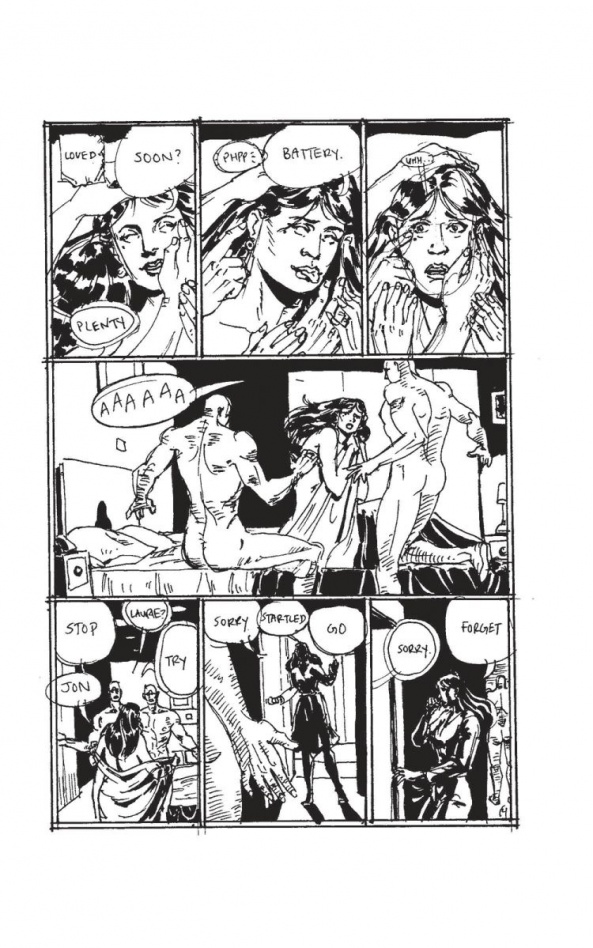 Do you see you and Nicole keeping this going with other books? Is this an exercise you would like to see other creative groups do?

DB: We’ve all been talking about doing a few different ideas. I think it would be really fun, but I also think there’s a fine line. I make comics. I don’t like fan art. I make my own comics with my own characters. I consider “Shitty Watchmen” to be equally as lowbrow as it is highbrow. If the next thing is that and we can all learn something and make a statement, then yeah we’ll probably do another one. But it would be really easy to do “Shitty Deadpool” and sell truckloads of it at conventions. I can’t tell you how many times I’ve heard “Do you have any Deadpool?” at shows. Does it look like I’m the guy who makes Deadpool? I make my own comics. Do I think other people should practice making comics by copying other comics? Hell yea! It doesn’t have to be a specific and pointed as ours. I’d just like to see people making shit. I like it when people express themselves. Even if it’s not something I’m into, making shit is hard.

The question I have seen asked is what do you think Alan Moore or Dave’s reaction might be or is it something you guys worried about in creating it? You do include some good Moore quotes.

DB: I think Alan would hate it, honestly. I could be wrong, but for a guy who dresses up like a warlock and worships a snake he doesn’t seem to have a particularly developed sense of humor. “Shitty Watchmen” is published by Nicole and I with the guys over at Protein Press. Kris Saldana from Protein actually reached out to Gibbons over Twitter and showed him the book. His reaction was about what I was expecting. “Errrrrr…..thanks?” That makes sense for who that dude is. We’ve been joking around that we might put that as one of the quotes on the back of the book. Who knows? We might.

How is “Action Hospital” going? “Fuck Off Squad?”

DB: Good! Thanks for asking! I’m currently drawing issue 19. It’s going to be roughly 250 pages long. It’s available in print on my site, if anyone is interested. It’s basically Eternal Sunshine of the Spotless Mind meets Men In Black set in a hospital, with the added twist that it’s drawn by seven different artists. Each one of those artists is paired with a specific character so whenever they show up it’s always the same person drawing them. It’s really cool to see people draw on the pages together. I write it and I draw one of the storylines. The first collection contains 18 issues and clocks in at roughly 250 pages. “Fuck Off Squad” is the other continuing book that Nicole and I make. It’s a coming of age story about three skater kids in LA. Sadness, Star Trek jokes, and sarcasm abound. There’s been two releases so far “Fuck off Squad” and “Teenage Switchblade.” Nicole is currently working on the third book in the series, “Fever Coast.” I’m really excited about it. She’s hitting a whole new level. Really amazing stuff.

For anyone interested in the book where can they go to get it?

DB: If you’re looking to pick up a physical copy you can snag it here or if you just wanna look at some of the pages they’re all being uploaded to Tumblr. 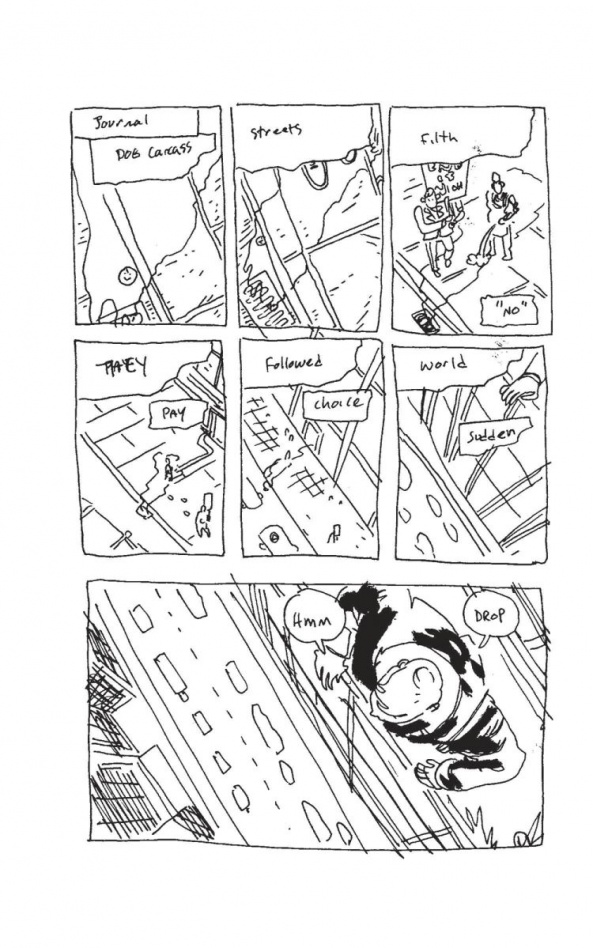