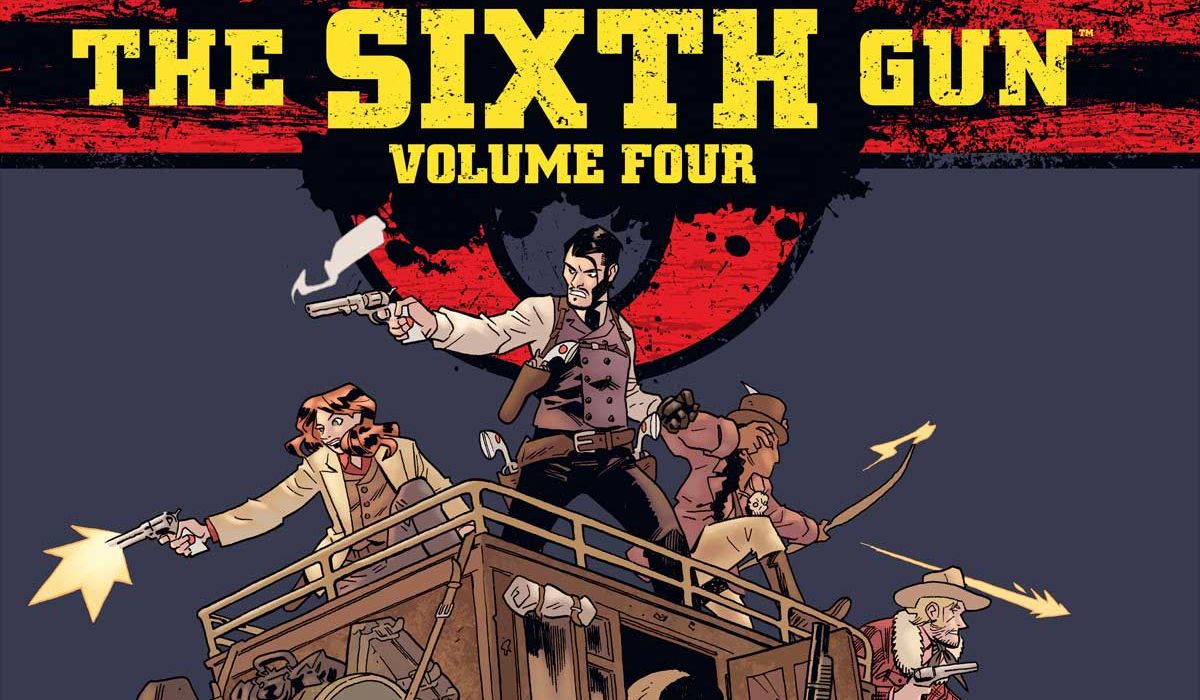 Welcome back to Haunted Trails, Multiversity Comics’ column exploring Cullen Bunn and Brian Hurtt’s “The Sixth Gun.” This time we’re talking to artist and co-creator Brian Hurtt about his cover work for “The Sixth Gun – Volume Four” deluxe hardcover collection coming out August 23. The book will be coming out in two editions: the Deluxe Hardcover Edition, which should be available everywhere; and the Gunslinger Edition, which will only be available through the direct market and limited to a print run of 500. 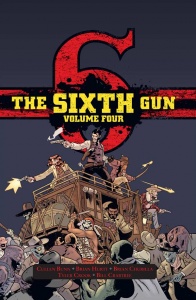 Let’s start with the cover for the hardcover edition of “The Sixth Gun – Volume Four.” How did you arrive at this cover design?

Brian Hurtt: I had to start by figuring out what the subject of the cover would be. As this volume collects one arc of the main series and one of the spin-off series I knew I was a little more limited in what content I could draw from (because it was never in doubt that the cover would relate to the main story).

The only rules I’ve set for myself for the covers to these oversized editions is that (1) Becky and Drake feature (2) they both are at about the same scale from cover to cover. That known, I had to figure out who else I wanted—or felt needed—to appear on the cover. That also became obvious when I realized that this arc features the deaths of one or more main characters. So for some of them, this would be the only chance for them to appear on the cover. Therefore, I decided to include the entire cast of ‘good guys’ and this also worked from a story point of view as this is the arc where they are all together and fighting a common enemy for the first—and last—time.

From there, it was relatively easy to put together the image. The story arc in question takes place over the course of a day or so as our heroes battle Griselda’s snake men in the town of Brimstone. So the subject matter was obvious but then I had to design the composition in a way that would feature all these characters, be somewhat dynamic, and most importantly—don’t cover the logo!

I settled on a classic pyramid design flow—in this case the classic ‘hero(es) fighting atop a pile of baddies’ trope (that I’m a big fan of).

‘Hero(es) fighting atop a pile of baddies’ covers

Once I had settled on that, the use of a stagecoach to elevate the heroes came immediately to mind. I briefly considered buildings or other structures but I already decided early on to have no background or environments. That decision was come to based on trying to provide variety—or an ebb and flow—to the covers. That is something that I take into account from the beginning—how this volume relates to the volumes that preceded it (and even those that will follow). I want the design to carry some elements across all books (the logo, Becky and Drake featured at same scale, some inclusion of imagery that places image in the related story arc) but at the same time every edition is an exercise in contrast to the other volumes. A lot of that starts with color. With Volume One we had a blasted out, white background; Volume 2 was a lot of green/blue; Volume 3 was cool blues and whites. 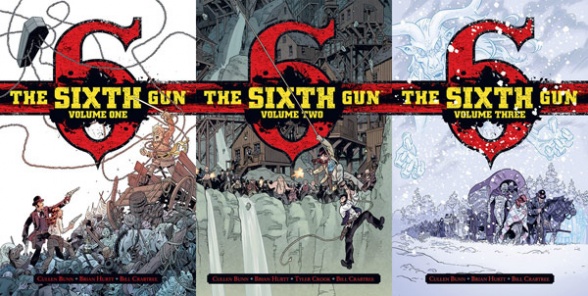 So I knew I wanted to take this cover in a darker direction while avoiding blacks, greys (because I know what the next two covers will look like!) and I design a cover to take place at night and then talk with Bill Crabtree about my intent and he runs with it from there. 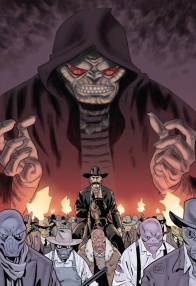 The Gunslinger edition presents a whole other design challenge. You’re designing a wrap-around dust jacket and a slip cover, and the two need to be designed together as part of a set. This volume, however, is a little different in that it isn’t collecting two arcs that flow straight into each other. And like you said before, this book collects two stories with very different casts and set in different time periods. How did this affect your approach to the covers?

Brian: This was definitely a challenge! For starters, I knew that one side of the dust jacket needed to feature the Horsemen and reflect their story. But, I’ve approached every previous dust jacket as a complete piece and I couldn’t justify that miniseries (which is featured within) being the focus of both the front and back of dust jacket. So, to that end, I had to come up with some kind of connective tissue that would connect the two images. After quite a bit brainstorming and sketching I realized that I had to lean more on the design of the image than anything else.

In the “Sons of the Gun” miniseries, the Horsemen end up facing off against a giant monster. I KNEW that I wanted to draw that. Then it became a matter of making the front cover bend to that design. I ended up settling on the “big bad” of the main series arc (Griselda) looming over her army of snakemen (though in a less literal way than the giant monster). I made sure both the monster and Griselda were to the same scale and let the rest of the pieces fall into place. At that point, a lot of the heavy lifting is on the colorist, Bill Crabtree, to unify the two images and make them seem of a piece. 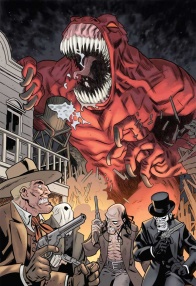 I imagine the back cover was especially fun, since you didn’t get to draw “Sons of the Gun.”

Brian: It was the one thing about working on this edition that I was the most excited about! First of all, I love the Horsemen as characters and they are a blast to draw. But I actually had a deeper yearning for doing this image.

That miniseries was my first published work as a writer and marked the first time that Cullen and I co-wrote anything. Having put so much creative energy and work into the scripts I was actually jealous of Brian Churilla for getting to draw the series! Especially the giant monster attack! I had been imagining everything as I went along writing the scripts—and reading Cullen’s—that it was an odd sensation to then hand it over to someone else. So there has been that itch that I’ve wanted to scratch since the miniseries came out and I finally got to draw a giant monster attack!

Is it freeing not having to deal with “The Sixth Gun” logo for the gunslingers? I only ask because the logo was a huge part of the single issue and trade cover designs, and it was an element you seemed to enjoy playing with. 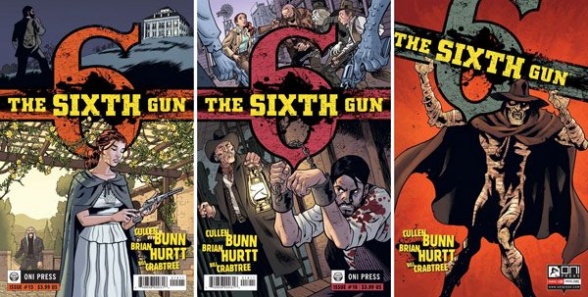 Brian: Sooooo freeing! When Keith Wood (designer) and I originally conceptualized the logo we were more focused on how large, dynamic, and original it was. I was not thinking in terms of how difficult it would be to design compelling images around that logo that dominates about a third of the image—and right there in the middle! At the time, I wasn’t thinking fifty issues of these covers—I was just crossing my fingers that we’d get to go past six issues.

The more covers I did the more I was able to figure out what worked and what didn’t and to even have fun with—and play with—the logo. But I definitely look forward to doing the dust jackets and being able to create an image that is more ‘poster-like’ in its design. It’s also great to see these images stripped of any typography—it allows everyone the opportunity to see an original piece in it’s entirety. 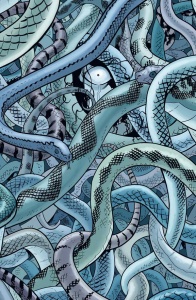 I love what you did with the slipcase. The scene with Missy Hume’s corpse collapsing into a pile of serpents is one of those iconic moments from the series, so it’s nice to have this volume wrapped up in it.

Brian: This was actually the easiest piece from a concept point of view. There are snakes everywhere in this arc and, as you pointed out, there is that iconic moment of Missy. I had initially played with the idea of just doing some kind of snakeskin cover. That morphed into a pile of snakes slithering over one another and then I quickly decided to throw Missy’s staring eye into that pile of awful.

I know that our designer Keith Wood has added some treatment (a spot gloss, I believe) to some of the foreground snakes. I think the final product is going to have a really great look/feel to it!

Excellent. I can’t wait to get my hands on it.

You can follow Brian Hurtt on Twitter and Instagram. He’s currently working hard on “The Damned” with Cullen Bunn and “Table Titans – Season Four: Road to Embers.”

The Sixth Gun – Volume 4 Deluxe Hardcover and Gungslinger Edition will be available from August 23, 2017 from Oni Press. Final order cut-off is July 31. 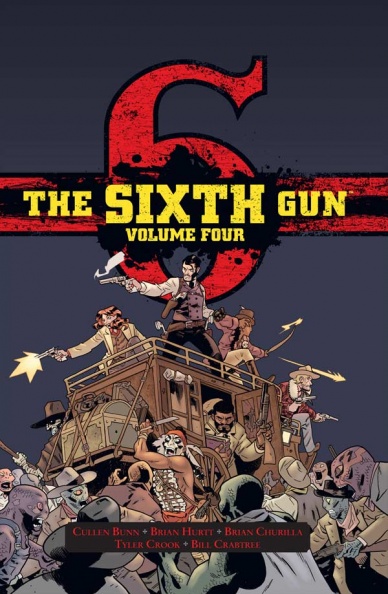 The Sixth Gun Volume Four Hardcover collects issues 36 through 41, featuring the “Not The Bullet, But The Fall” story arc of the ongoing series by Cullen Bunn, Brian Hurtt, Tyler Crook, and Bill Crabtree, as well as the five issue spinoff mini-series Sons of the Gun with guest artist Brian Churilla. This oversized deluxe collection includes never before seen artwork, design sketches, cover galleries, an introduction by Usagi Yojimbo creator Stan Sakai, and more, from the Eisner-nominated fantasy western epic. 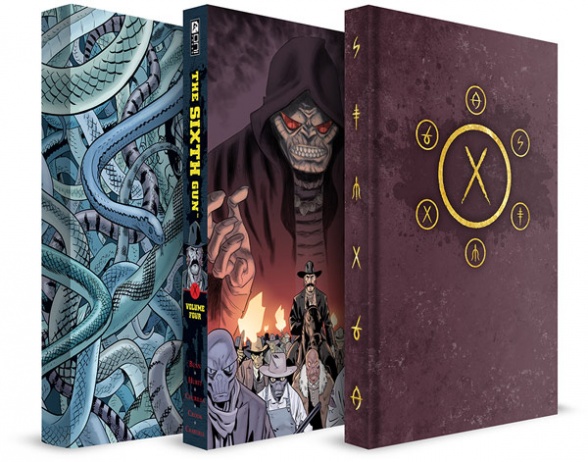 Limited to only 500 units, this direct market exclusive Gunslinger edition of The Sixth Gun Hardcover Volume Four also contains a tip-in signed by all the creators, and is presented in a deluxe slipcase and dust jacket featuring new original artwork. 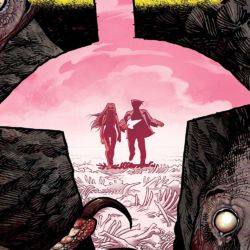 Welcome back to Haunted Trails, Multiversity Comics’ column exploring the world Cullen Bunn and Brian Hurtt’s “The Sixth Gun” and “Shadow Roads.” This time we’re looking at the latest arcs of “Shadow Roads,” ‘The New World’ (“Shadow Roads” #6–7) and ‘Birthright’ (“Shadow Roads” #8–10), which will be available in a trade paperback collection this December. […] 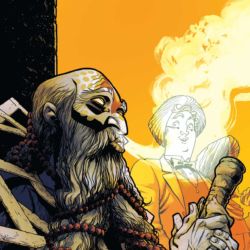 Welcome back to Haunted Trails, Multiversity Comics’ column exploring the world Cullen Bunn and Brian Hurtt’s “The Sixth Gun” and “Shadow Roads.”This Wednesday there’s a new issue of “Shadow Roads” coming out, the first in over a year. Unfortunately, the series took an unplanned break mid-arc after June 2019’s “Shadow Roads” #8, so I’m guessing […] 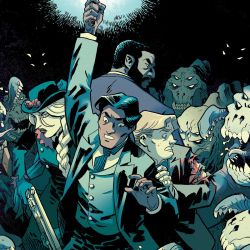