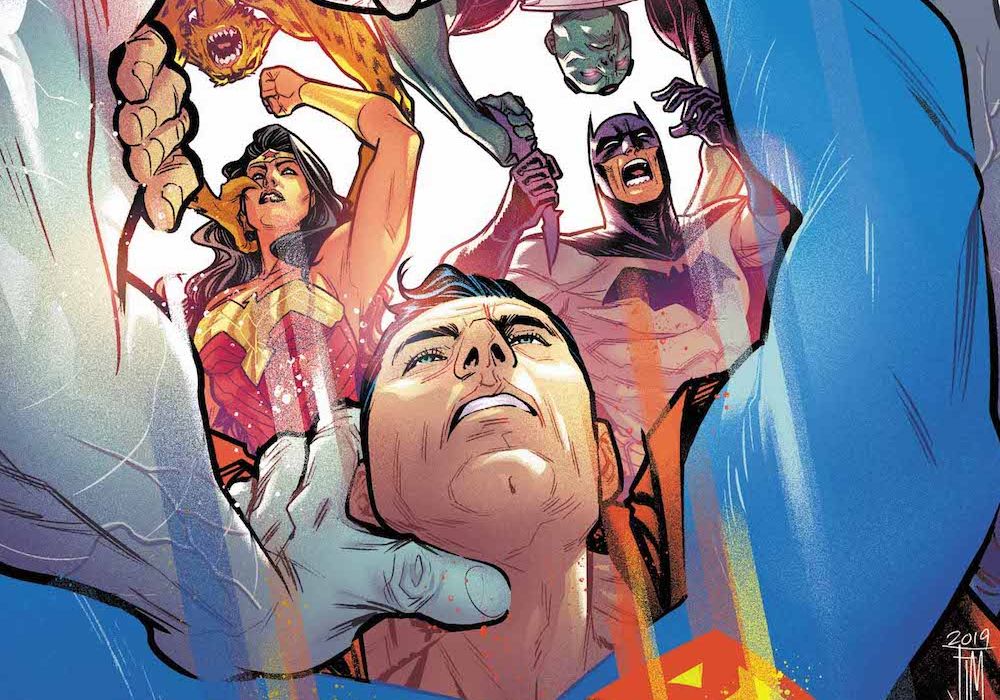 Scott Snyder and James Tynion IV, along with Joshua Williamson, Dan Abnett, and Adam Glass, launched the ‘New Justice’ line of titles well over a year ago now. The promise made at the time was that these stories would be big, bold, and offer something totally unique and unexpected. They’ve come through in spades, and there is nowhere that’s more apparent than in the pages of “Justice League,” the flagship title. Snyder and Tynion have been like two hands of the same sculptor, teaming up to create a story that feels almost unfathomably large.

Aided by an absolutely top notch art team, anchored by Jorge Jimenez, the book has been barreling towards the ‘Justice/Doom War’ for months now. Synder, Tynion, and Jimenez begin that war in earnest with next week’s “Justice League” #30 by doing some pretty amazing and wild stuff.

Be warned, major spoilers for next week’s “Justice League” #30 follow. Like, seriously, turn back if you don’t want to know about what happens next week. 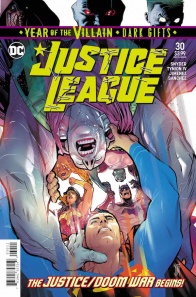 The “Justice Doom War” starts here! The Lex Luthor the League has known and fought is no more, replaced by an apex predator version of Lex, powered by Perpetua with a goal of bringing tragedy to the DC Universe. Now that Lex has powered up villains across the cosmos, he marshals his own troops, sparking a war between the Legion of Doom and the Justice League that will span space, time and the Multiverse itself. This is the start of the next big Justice League event, with consequences affecting “DC’s Year of the Villain” and beyond!

Next week takes that to an even further step, when Snyder and Tynion bring both the Justice Society of America and Kamandi into the pages of “Justice League” as part of the ‘Justice/Doom War’ event. If you follow solicits and interviews, you knew this was coming, but it is handled really well, and there is a really clever and fun way that Snyder and Tynion bring these disparate characters together.

I got to briefly chat with Tynion and Snyder about this culminating arc, the return characters, and why James can’t wait to write jokes from a certain boxing superhero.

I just read “Justice League” #30, and I’m still picking my brain up off the floor. So much happens in this issue. It’s a gigantic culmination of not just your series so far, but really so many parts of DC post ‘Rebirth.’ And so I guess my first question for you guys is just when did you realize that this is how the pieces will be coming together? Was this part of your initial pitch? When did this become the fulcrum of your run?

James Tynion IV: Yeah, I mean I would say this has been the plan from the beginning. If you go back to “Justice League” #1 in our current run, you’ll see some of the characters that we’re playing with in this arc across time. Like, this is the whole reason that we had the pieces of Perpetua, the totality that contained Perpetua, burn through all of space and time kind of creating these mysteries and giving us the excuse to do this big final arc. Going all the way back at the beginning, I remember the time Scott came out to Los Angeles when I was living out there and we were at my house with a big whiteboard and we wrote down the list of these are the story arcs and each member of the Legion of Doom. “This is the kind of story arc that they will be a part of.” And we wrote the ‘Ultraviolet Spectrum,’ we wrote the ‘Graveyard of Gods,’ we wrote the ‘Still Force,’ all of these things. And then at the bottom of the list was ‘Justice/Doom War,’ which was the big final confrontation. And so that conversation was happening when metal was still coming out on the stands. And now that we’re here, it’s just tremendously, tremendously exciting because we’re getting to pay off a lot of stuff that we’ve been building for years now.

Scott Snyder: It’s been a plan from day one. But the thing I would say is it’s also just fun to be able to reward readers at this point with all the Easter Eggs. So if you go back, when you look at “Justice League” #1, you’ll see Martian Manhunter’s vision of the future, things that are happening now and that has happened throughout the course of the run suddenly are explained. And when the end of ‘Justice/Doom War’ comes, you’ll see how that was tied from the very beginning of “Justice League” as well. So I mean for us it really is, we’ve never had the luxury before of getting to plan something so far out, one giant story or I mean I haven’t. So it was always arc by arc on “Batman” and then “[Dark Nights:] Metal.” So this was always billed as more architectural story and to have all of that now crescendo this way is just so gratifying and fun. The fact that fans seem to be buying in more and more as we get closer to the end and we bring back things from ‘Drowned Earth,’ you’ll see.

We’ll bring back things from ‘The Sixth Dimension.’ We bring back things from the ‘Totality’ arc. All of it comes back from little things like the vehicle that Batman used to ride inside Superman’s body, an incident he never wants to discuss ever again to the call across sort of the life force that we used in ‘Drowned Earth.’ I mean all of that stuff comes back to bear in this story. So without spoiling the return of characters that you might have forgotten about, characters that we teased but haven’t used yet, beyond the JSA and Kamandi, we just want this to be sort of the place you get to and say, Oh, all of it was planned. Look at that. They built one giant machine from the beginning and it’s all sort of paying it forward and paying it off now.

Now how much of this story was dependent on having those big surprise characters able to be here at the end? If you didn’t have access to Kamandi or the Justice Society, would this story have still worked?

SS: Oh totally, but I mean we knew we had access at the beginning. It was planned when “Doomsday Clock” was going to reintroduce Justice Society and Brian [Michael Bendis]’s plans for Kamandi were known since almost since he started and discussed early on. So there was never a sense of it being, there was never sort of any jeopardy of not getting to use them or any sense of risk with that. I mean, ultimately what I would say is, I know there are questions about how the “Doomsday Clock” is going to play in, how we’re going to sort of coordinate with Brian Bendis and all of that stuff, but the truth of the matter is we really are trying to build something that will explain its connections, its bridges, its overlap as we go. So there is a plan.

I would just say be patient because the way in which like our Justice Society pays off sort of what’s happening in “Doomsday Clock” or how “Doomsday Clock” might affect what’s happening in our sort of universe that we’re building here, all of that stuff I promise we’re thinking hard about and want to make sure and we have a big plan for it. But for a while you might have to be like for the next couple issues you might have to be like, wait, why does the Justice Society look like this here, but that there? What did Dr. Manhattan do? Is there a mystery? All of that, but you know, we’re building to something that sort of ties it all up.

JT: And the characters within the story are asking some of these exact same questions. So I mean I think you’ll see that this is all part of one big plan.

Of these big surprise returning characters, which one was the most exciting for you guys to be able to write in this arc?

JT: Oh boy, I mean it has to be the Justice Society. There are a bunch of these characters that pretty much since I’ve started writing in DC comics eight years ago have kind of been off the table. Just being able to, and you’ll see in the next issue some of this pay off, but just being able to write Wildcat making a joke is something that I’ve wanted to do in terms of just playing with the core pieces of the DC Universe. So it’s just exciting. It’s very exciting to have this open toy box in front of us.

SS: Knowing James, I can vouch for that. He has had many Wildcat jokes in the back of his mind for many years and I would echo that the JSA is, I’ve had my sights set on them for a very long time and I have sort of teaser spoiler that I have plans for them beyond ‘Justice/Doom War.’ I really want to explore the raw and brutal age in which they became the first superhero team back when they were young and at the height of their abilities.

But I think also in this one, I’d say Kamandi is tremendous fun to write? I’ve never gotten a chance to write him and it’s one of my favorite sort of Jack Kirby creations. And for this story, they almost represent Justice Society and then two different poles. Like Justice Society is the beginning of heroes banding together in a sort of good faith bond of hope about humanity right at an extremely dark moment and Kamandi is the opposite. He’s like the loneliest person in the world. He’s the last anti-human after a great disaster has proved that we don’t have what it takes to band together and fix anything. So they represent sort of really interesting, sort of polar opposite points in the giant narrative of humanity that I think Justice League is sort of all about. It’s tremendous fun.

“Justice League” #30 hits stores on August 28th. Thanks again to Scott and James for making the time to chat. 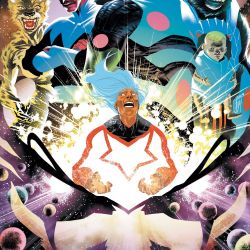 Scott Snyder on “The Batman Who Laughs” Wrapping Up and Introducing the Justice Society to “Justice League,” Plus an Exclusive Preview of “Justice League” #26

Scott Snyder is a busy guy. Aside from writing his ‘last Batman story’ with Greg Capullo, “The Last Knight on Earth,” and prepping for the return of “American Vampire” next year – oh, and being a dad of three – Scott is finishing up his “The Batman Who Laughs” miniseries and bringing DC’s most bombastic […] 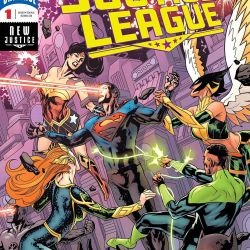 Today saw the release of “Justice League Annual” #1 by Scott Snyder, James Tynion IV, and Daniel Sampere. To call this issue huge would be an understatement akin to calling Facebook ‘problematic.’ Synder and Tynion bring back story threads from books like “The Multiversity,” “Dark Nights: Metal,” and “Justice League: No Justice,” while weaving in […] 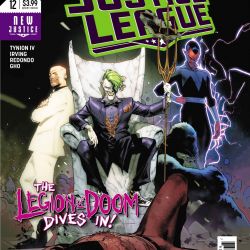 Welcome to Hall of Justice, our new column that focuses on DC’s Justice League titles. Each month, we’ll be interviewing creators behind the books, looking behind the scenes and helping us look ahead to what’s coming next. Today, we are joined by James Tynion IV, writer of “Justice League” #12, as well as all the […]