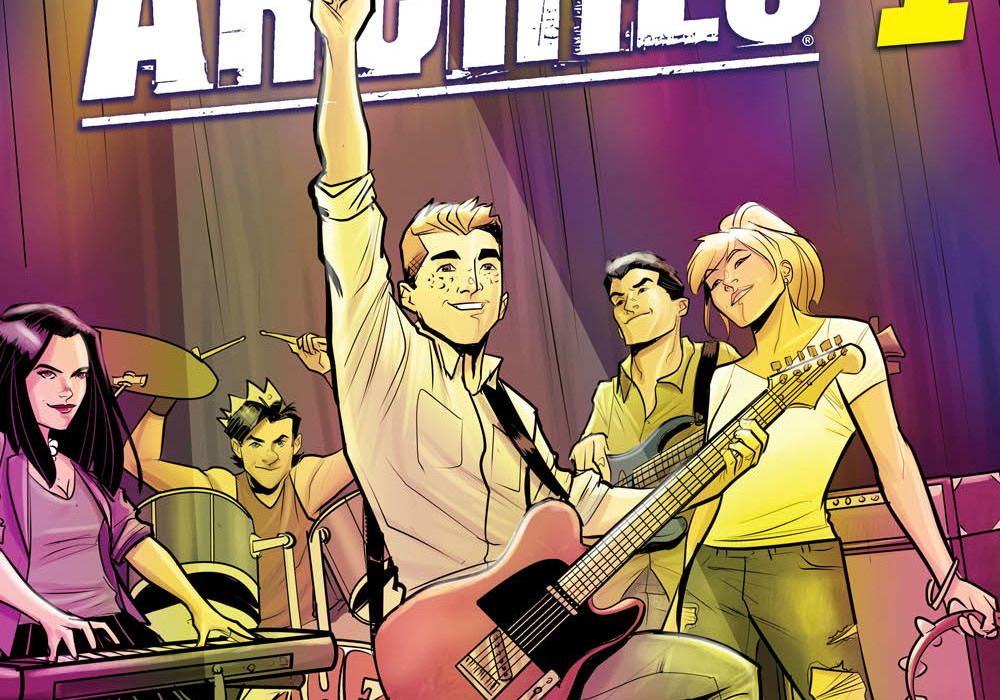 After the success of Matt Rosenberg, Alex Segura, and Joe Eisma’s “The Archies” one-shot from May, Archie Comics has announced a new “The Archies” ongoing. The series will spin directly out of that one-shot and will feature Archie, Betty, Veronica, Jughead, and Reggie on tour with their band, bumping into other real-life bands and dealing with the personal struggles that crop up.

We recently got a chance to interview series writers Rosenberg and Segura regarding the series. Below you will find their thoughts on creating the book and their personal experiences with music. Look for “The Archies” #1 in comic shops and on digital platforms October 4.

Why do you think now is the right time to launch a series centering on The Archies? 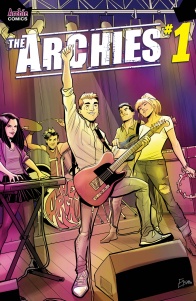 Cover by Joe Eisma
Matt Rosenberg: I feel like people are really understanding how versatile the world of Archie is. Everything from Afterlife to Riverdale shows all the different things you can do, because these characters are so great. While readers are excited to see where Archie and company appear next, why not throw them in a van and send them out to see the world?

Alex Segura: I think there’s definitely a space for the kind of story we’re telling – which is a pretty grounded, funny and honest portrayal of life in a band, and life on tour with your friends. As Matt and I both know from personal experience, being in a band is hard. Being in a band with your friends can be harder, and this book explores that in a fun way. Plus, Joe Eisma’s art is amazing, so it’s a win-win.

Will the tone of the series be more campy, like “Archie Meets Ramones,” or will it be more grounded, like the current “Archie” series and the “Archies” one-shot?

MR: It’s somewhere in between. We want to keep it fun and make people laugh, but the story definitely lends itself to some drama. I think that’s one of the things we’re really lucky with- Joe Eisma is so good at drawing these believable characters that we can do absurd things to them and it doesn’t make you suspend disbelief, but when we put them through the ringer you can really feel it. They feel real and, with that, we can be as absurd or as grounded as real life is.

AS: Like Matt says, it’s somewhere in the middle. You can basically treat “The Archies” one-shot as the pilot episode for the series, and we pick up right after that, but you don’t need to have done much homework to get what’s going on. It’s mainly a fun book about friendship and music, but it also deals with some of the intense stuff you feel being a teenager and being cooped up with the same people for a long time, trying to create art. There’s some wear and tear that comes from that, and we want to explore how that plays out, while also introducing the Archies to some amazing, real-world bands.

Do you have any personal experiences being in or around bands that have influenced your creation of the comic? 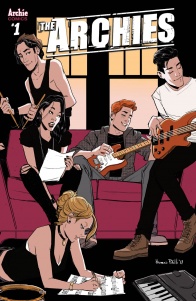 Variant cover by Thomas Pitilli
AS: I was in bands for most of my 20s, and I went to a lot of shows – from big stadium things to more intimate clubs – and it really informed a lot of the writing on this book. I don’t have Matt’s touring experience, but I know a lot about the process of being in a band and booking shows and performing in front of people. It’s stressful, exhilarating and euphoric – the best and worst of times. Few things can top that feeling of nailing the right sound when you’re playing with people, or that look you give your bandmates when a song sounds right. It’s magic. We want to tap into that a bit here.

MR: When I was 17 I went to go see a punk band play in the East Village. I was talking to their drummer and he said that their merch guy had to go home and if I knew anyone to send ’em their way. The next day I was driving in a van across [the] country with 3 total strangers. After that, I have done just about everything you can do in music that doesn’t require musical talent. I’ve managed bands, ran a record label, put on shows, worked security, done sound, been a guitar tech, merch guy, awful fill-in keyboard player, and a tour manager. I’ve been to 48 states and 15 countries.

How do you choose which real-life bands to feature in the book?

MR: I try to reference bands who I love, whose music inspires me. It’s not really anything complicated. I like Superchunk, Joyce Manor, and Born Against, so we’ll throw some hidden and not so hidden references to those bands in there. It’s fun because Alex and me have overlapping musical tastes, but not exactly the same, so we amuse each other with it.

AS: What Matt said. We mention bands we like, basically, and hope that’s enough!

Other than the characters, what will separate this series from “Josie and the Pussycats,” which also features a band on tour?

MR: We have more Jughead.

AS: This book is Archie’s Avengers, basically. It has all of the company’s most popular characters together every month, and it can, if we do it right, serve as a linchpin book for the company. Expect to see a lot of “real-world” band guest stars, but also a lot of Archie Universe guest stars, for sure.