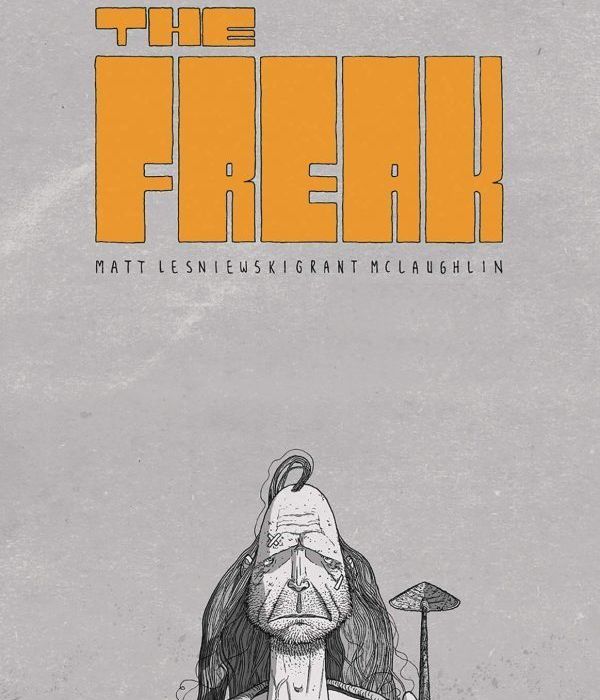 For many of us there has been a time in our life where we felt like an outcast, misunderstood or maybe even a freak. This can be an overwhelming and oppressive feeling to shake. For most we are able to grow into our own skin, find a like minded community and hopefully acceptance. However, for the main character of Matt Lesniewski’s new graphic novel, “The Freak,” all he finds is hate  that follows him wherever he may go and a population who wishes to see him pummeled in the streets.

Luckily we were able to speak to the creator Matt Lesniewski to learn more about this man’s horrible existence and why he wanted to write comic about it. Matt discusses the nameless freak, his detail heavy art, the importance of independent stories and publishing with AdHouse books. A big thanks to Matt for taking the time to talk about “The Freak” which you can find in stores and online now!

For those readers unaware, what and who is “The Freak?”

Matthew Lesniewski: “The Freak” is a story that follows a man in a world where ugliness is met with violence and is unacceptable in society. Everywhere the Freak goes, he’s pummeled for his appearance and general aura, which leaves almost everyone he passes in a state of disgust. Because of this, he took up the job of a ditch digger, hoping to go unnoticed by people, yet punishment followed him there as well. The story opens with the Freak deciding to head for the big city, hoping people will be too busy to even notice him. Once there he can start anew and dig ditches like usual. However, when he arrives, he encounters the worst beating of his life as people quickly notice him sticking out like a sore thumb. Once he wakes up from the violent coma, his trusty digging shovel is missing and he must follow a trail of his own blood to track it down.

“The Freak” tells a very unique singular story. Why was this a story you wanted to tell?

ML: I felt like I had to tell it. I felt like it was something that needed to exist. It’s personal and it’s something that came to me. I didn’t come up with it, if that makes sense. I feel like every comic I make should be one where I should be afraid of dying before I finish it. If not, why make it? 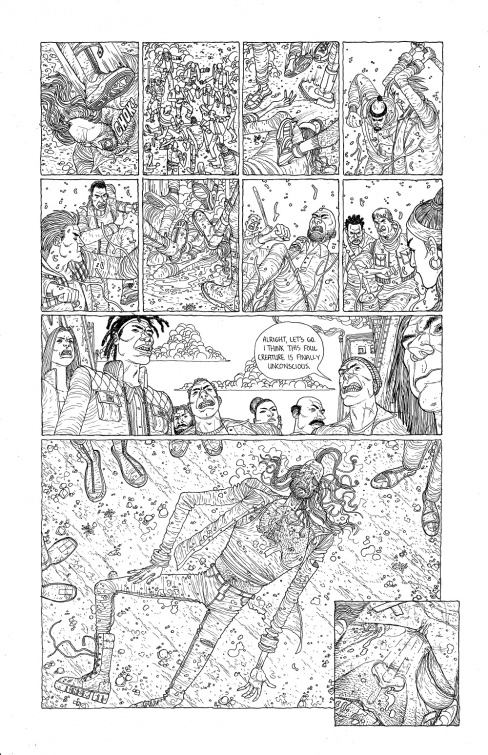 I’ve heard you talk before about your approach to a page layout and how you almost work panel to panel on the page. How would you describe your approach and for you what have you found is the benefit to tackling pages this way as storyteller?

ML: Instead of penciling an entire page (or multiple pages ahead of time) and then inking it, I pencil the first panel on the page, and then ink that. Next, I do the same for the second panel. And the process continues like that for the rest of the page. I never really go back to a panel once I move on to the next. This is just what works for me. Mostly because I like to keep things as organic as possible and not plan too much, aside from the thumbnail sketch I did for the page ahead of time and the script I’m going off of. A lot can change based on the way I ink one panel alone, so penciling an entire page ahead of time would be a waste of time. I’d end up changing a lot, so it’s not worth it. And it feels more like a genuine storytelling process if I draw the panels in the order the reader will read them. That might not actually make a difference but for me it feels right. And one other reason for this is a lot of the time I’ll want to pencil outside of the panel because the perspective might go outside of it, or a character in the foreground is something I want to draw more of just to make sure it looks right and makes sense in the world I’m creating. Therefor, penciling everything in advance would create a lot of messy overlapping.

Your work is very detailed with lots of textures and line work especially in this story. To me it feels very European almost Moebius-esque. What does that sort of detail bring to your story telling? Is the approach different when it is in black and white like this story?

ML: To be honest, this isn’t really something I think about that much. I just do what feels right. Drawing with the level of detail I do is more of a compulsion than anything else. I suppose the detail in the drawings help illustrate the world and story I’m trying to depict. One thing I can say is, I drew this in a way that it would stand on its own no matter what. I wasn’t sure if I’d have a colorist to help with the art for the final product, so I drew it with the idea that whatever I come up with, it needs to be a thing that works on its own. If a colorist were to join me, they’d have to add to what I’m doing, not be something I’m relying on or expecting. I think the work is better overall when working with that mindset.

ML: Books like “The Freak” help show that comics are a storytelling medium and they’re so much more than what a lot of people think they are. That’s important. At some point people will get tired of Spiderman (some of us already are, I’m sure) and comics will die if people think that’s all that they are. Superheroes are a genre, not comics as a whole. 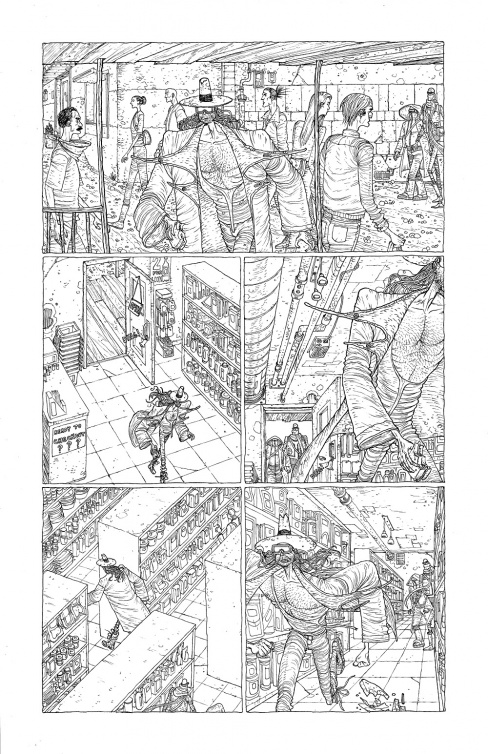 You self published the first chapter of the book and then teamed up with AdHouse Books to publish the complete graphic novel. What has that experience been like working with AdHouse? What is the difference between self publishing versus having a publisher like AdHouse?

ML: I couldn’t ask for more from AdHouse Books. It’s been great. Chris Pitzer, the publisher, let me tell the story I wanted to, how I wanted to and gave me the platform to do it. And he didn’t make me change anything. That alone was amazing for me. He also got the book in front of a lot more readers than I ever could have on my own.

This story is a solo creation but you have done work with other creators, what is the benefit of solo work? Could a story like this work with a writer and artist?

ML: This story is personal for me so it never would have been the same working with anyone else. It can be a double edged sword though, working mostly alone in that you get to run wild with all of your ideas and no one is there to stop you. Luckily I think it mostly worked out here. Also, I have my friend Grant to thank for keeping an eye on the story for me and making some suggestions so I wasn’t completely in the dark. One of the benefits though to working solo is you get a singular vision, like you mentioned. It’s not mixed or diluted by anyone else’s ideas. That way I completely know how to draw the story because there’s no amount of wondering what the writer of the book is really hoping for, envisioning or expecting me to draw. There’s absolutely no confusion or mystery. Sometimes confusion can lead to good mistakes, but I think it’s even better when there’s clarity and you know exactly what you’re going for when you’re drawing a comic (for me anyway). I draw in such a specific way that it can be frustrating if I don’t know what I’m supposed to be going for and that never happens when I know exactly what the story is supposed to be like. 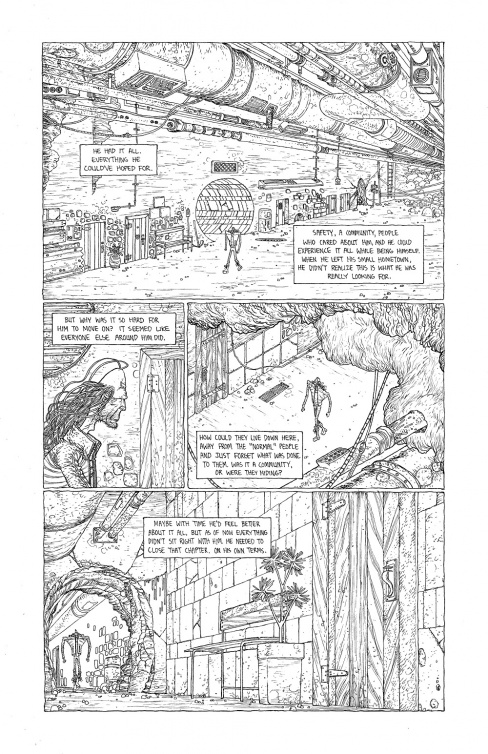 What do you have planned next? Do you ever see yourself returning to this world or these characters?

ML: Aside from some smaller projects, I’m currently drawing my next graphic novel. There’s not much I want to say about it yet. It’ll be completely separate from “The Freak.” Another story that’s completely it’s own. “The Freak” is complete and I won’t be returning to it. One thing I can say is the next book will be longer. It’s planned to be five chapters. And it’s possible that I’ll be working with a colorist on this one but nothing is confirmed yet.

What do you hope the readers take away from their experience with “The Freak?”

ML: There is a story for readers to follow on the surface of things if they somehow don’t relate to anything in the book. But, “The Freak” was purposely made in a way to be open to interpretation to some extent. It’s not really for me to say what readers should take from it. However someone relates to the book is up to them and no interpretation is wrong. Whatever someone takes from it is on them. I’ve already had several people give me different takes on the story that I never even would have expected, and that’s exactly what I was hoping for.