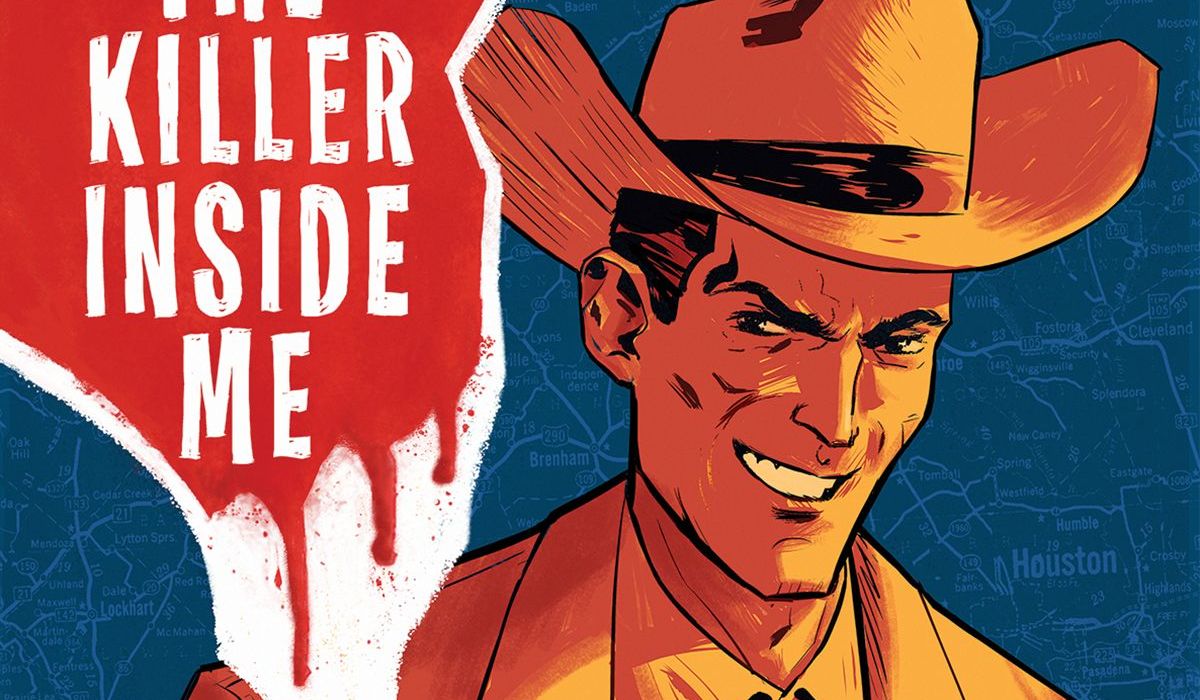 Tomorrow, IDW Publishing releases the first issue of “The Killer Inside Me,” a new graphic adaptation of Jim Thompson’s classic hard-boiled crime novel. For those that are unfamiliar with Thompson, he is one of the masters of the genre who, sadly, was never properly celebrated during his lifetime.

IDW commissioned the five-issue miniseries from journalist turned first-time comics writer Devin Faraci and artist Vic Malhotra (“Roche Limit,” “Tiger Lawyer”), both of whom were kind enough to chat with us about the series, the novel, adaptation, and more. Vic was kind enough to share with us some character designs, as well as three uncolored pages from the first issue, which you can find after the interview. 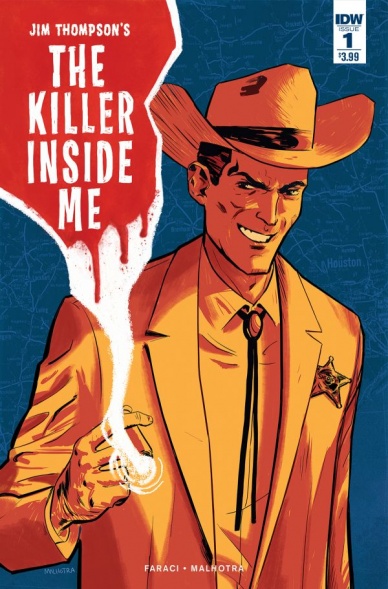 So, folks, why was this a book that screamed “adaptation” to you? What was it about the source material that made you want to adapt it?

Devin Faraci:It never even occurred to me! I got a phone call from Chris Ryall at IDW, who listens to my podcast The Canon and heard me mention how much I love Jim Thompson. IDW had the rights to this book and they were looking for a writer, and Chris wanted to take a chance on me. It was a really scary prospect – I think this is one of, if not the best crime books ever written – but it was the scariness that made me really want to tackle it.

Vic Malhotra: Chris reached out to me too! I’m not sure if they had a writer at the time, but I had plenty of time to re-read the book multiple times and really think about how a comic adaptation of the book could work. It’s tricky, but I think that’s part of the appeal to me. The challenge of figuring this thing out.

For people who are unfamiliar with the novel, can you give us the story in broad strokes?

DF:Lou Ford is a deputy sheriff in a small city in West Texas in the early 50’s. Everybody thinks that Lou is a big dumb hick, but he’s actually a cunning and manipulative sociopath who has been controlling his urges towards violence for years…until now. 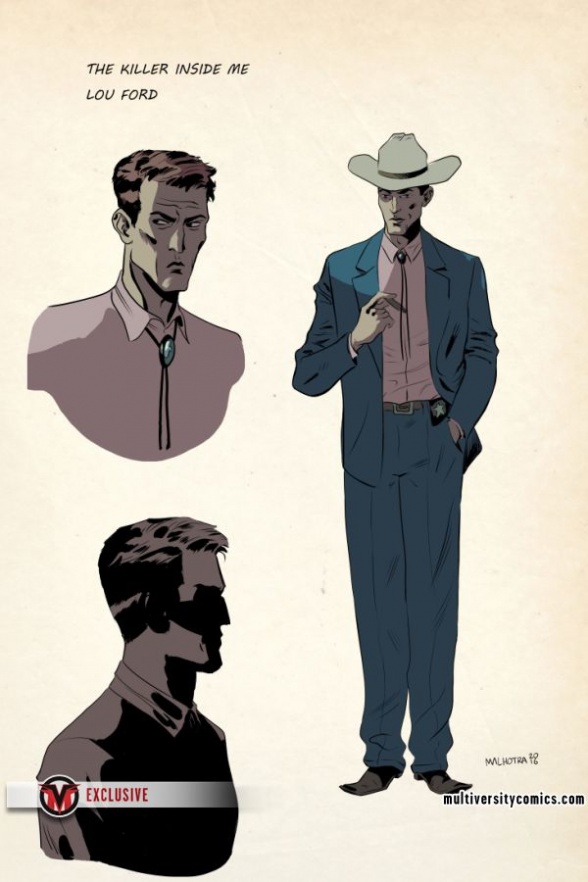 Devin – obviously, the novel is going to provide you with more information than you could ever fit into the comic. What’s the process like of pairing that down to something more manageable?

DF:I feel like I’m cropping the Sistine Chapel. Jim Thompson’s prose is so alive, so exciting, gets under your skin so deeply… and my job is to cut away 98% of it! I hope that anyone who likes this comic runs to the book store and picks up the real novel, which is so much richer and so beautifully written.

Vic, you’re obviously used to taking the written word and embellishing it with imagery. Is it any different when working off of a novel? Did you read the book prior to starting the work, or are you just letting Devin’s script be your guide?

VM:I become really obsessed with most of the projects I work on. So I’ve read the book a bunch of times, dug into all the Jim Thompson interviews I could find, and watched the two movie adaptations. 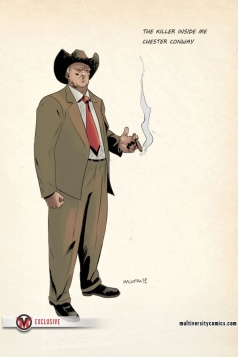 I decided to distance myself from any of the previous adaptations right off the bat. I don’t want to comment on the quality of them, but I want this to be its own thing. Not the comic book adaptation of the movie adaptation of the novel.

Once I get the script for an issue, it’s not too different than working on any other book, although, having the novel does give each of us a blueprint to compare against and pull information from. Information about the setting, physical descriptions of characters, reoccurring events and themes, relationships, etc… So even before I had a script, I was already able to visualize and test out certain storytelling techniques I wanted to try. Devin has scripted a really great version of the book. It somehow feels like the book without being exactly like the book.

Similarly, was there a challenge to not just dictate to Vic what you saw, visually, from the book? As we read, we obviously create images in our mind to go along with what we’re reading – was it a challenge to let go of those visuals, or did you try to incorporate that into your script?

DF:Vic has been a dream collaborator. For one thing, he loves the book. When I came on I was worried I would be working with an artist who didn’t have an affection for/had not read the book, but Vic has been so into the characters and the story right from the beginning that I feel like I’m just the guy standing between him and Jim Thompson.

More than that, I have learned over the course of this collaboration that Vic can take stuff that I write and make it about 2000 percent better. This is a book that can, in stretches, get a little talky, but he is always able to take these sequences and make them thrilling and tense, allowing the story to coil and build up to the explosions of violence that define it. 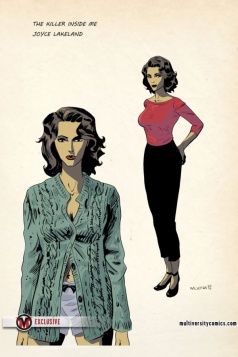 Vic, you’ve done work across a variety of genres over the past few years, but you seem to have a real knack/love for the era in which the book is set. What is it about the noir style and tone that appeals to you, artistically?

VM:What’s not to love? The genre just oozes iconic imagery and worlds filled with mystery and shady characters. Plus the cars from that era are way more fun to draw!

Artistically, I guess the “noir style” that comes to mind has lots of shadows and ink on the page and I do like that, but over the years I’ve been pulling those things out of my work. I still absolutely love the look of that, but I’d rather use that sort of thing for impact or a purpose.

The pulp/noir genre has found a real home in comics over the past half-decade or so. Why do you think it is such a good fit for the medium?

VM:I think almost any genre or story CAN work in comics, but pulp stories work especially well because the concepts at the heart of them are simple and you can jump into the heart of a story quickly. The imagery is always strong, the writing is snappy, and there’s sure to be action. A character narrating their own story doesn’t always work, but it works most of the time with pulp/noir. 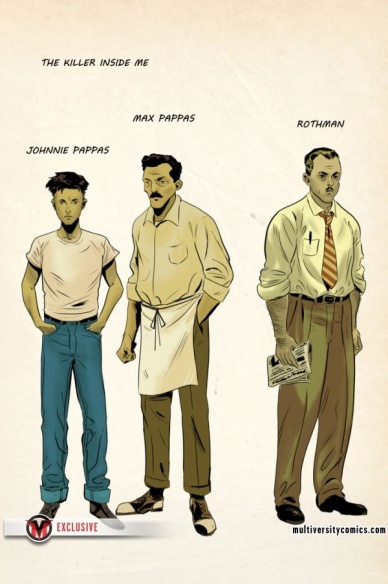 Devin, this is your first comic work. Was working off of someone else’s story a nice ease into the new gig? Do you see yourself doing more comics in the future?

DF:You know, I thought doing an adaptation would be easy but it turns out that it’s really hard! It’s especially hard if you truly love the work you’re adapting and are reluctant to cut any single thing out of the book. But it’s been really interesting because the process has taught me a lot, and having to approach Thompson’s work from a really deeply analytical place – having to understand what story strands connect in what ways, figuring out what information about characters is necessary, figuring out how to transfer the pacing of a novel into five twenty page comics – has been an incredible experience. I would love to say that it has turned me into a surgeon of stories, understanding how all the pieces connect and work together, but I think I’m really just a butcher, trying to figure out which meat is the tastiest. 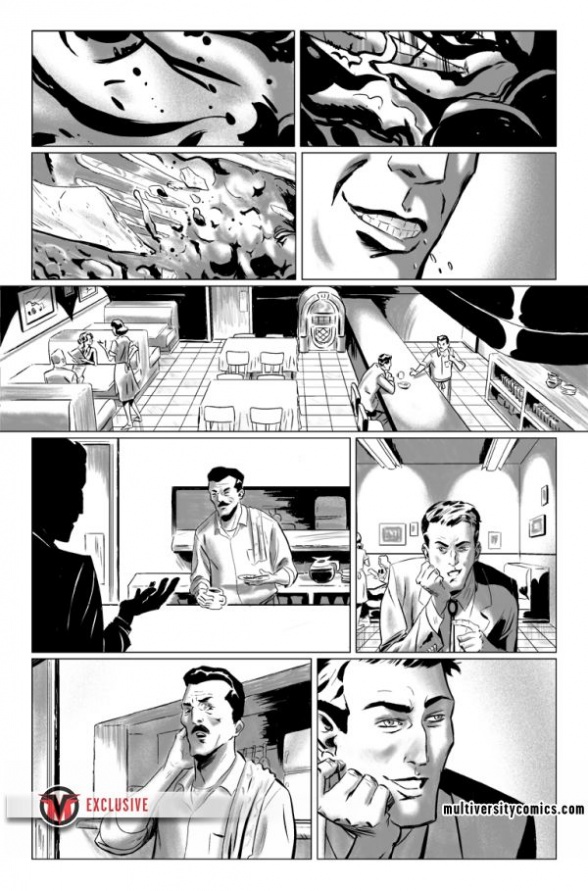