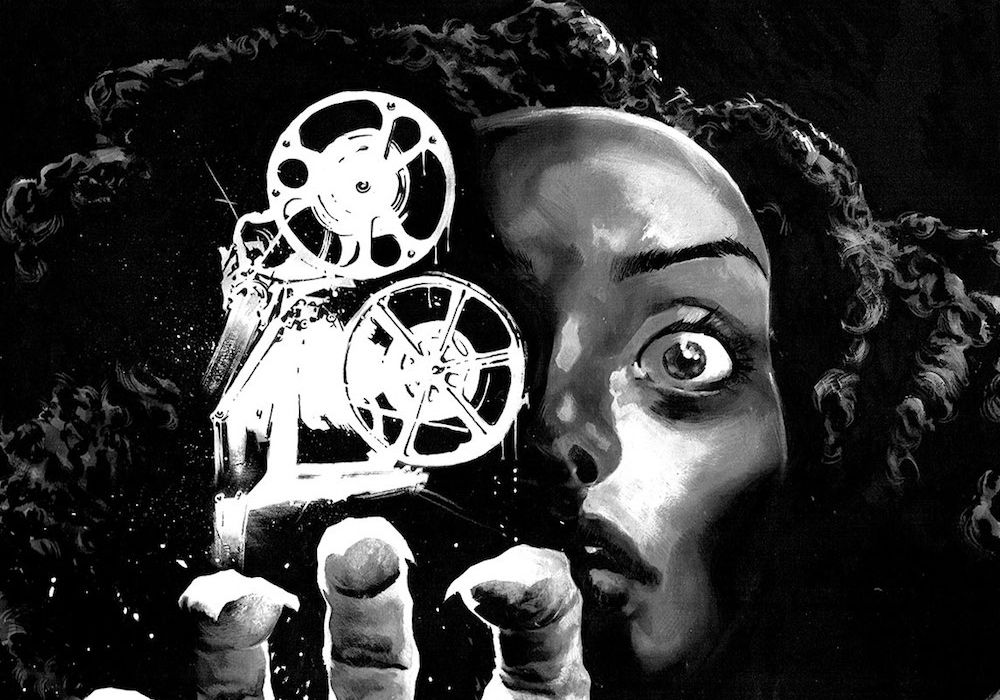 Just moments ago, Bad Idea announced their first batch of titles for 2021, including “The Lot” by Marguerite Bennett (“DC Bombshells,” “Animosity”) and Renato Guedes (“Wolverine,” “Psi-Lords”). The horror series will launch in July, but we’ve got an interview with Bennett and Guedes about the series, as well as two exclusive character designs by Khari Evans to help tide you over until next summer. 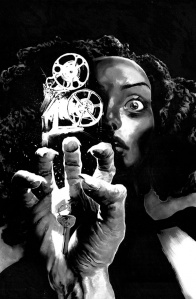 In 1970, legendary filmmaker Oliver Larsen began production on his latest horror masterpiece on the lot of Los Angeles’ famed Cloverleaf Studios. Obsessed with bringing authenticity to the genre, the director insisted on casting real-life occultists to perform a genuine Satanic ritual live on camera – until something went horribly wrong. In the bloody aftermath, the production was shut down, the footage was confiscated, and the soundstage was forever shuttered.

On the heels of a promotion that’s just made her the youngest studio chief in decades, Aviva Copeland is planning to overhaul Cloverleaf’s fading image for the 21st century – starting with the prime piece of California real estate that’s gone unused for 50 years: the very same lost soundstage where Larsen filmed his doomed masterpiece. But, as Aviva will soon discover, this corner of the lot may have been closed for a half-century, but it’s far from empty…and the evil that lives within its haunted walls will soon seize its chance to kill again.

The word ‘horror’ is so subjective; it could mean anything from Bela Lugosi in a cape to a puppet with a knife. When you were putting together this story, what were some of the touchstones for what you felt “horror,” in this context, was?

Marguerite Bennett: Here is the long answer: In the case of “The Lot,” horror is the moment of surrender before catharsis/revelation/death, interchangeably. It’s the moment when everything is so big, so screwed up, so profane or hideous or repulsive or banned from your personal values or beliefs about the nature of the world, your survival impulse shorts out and you have no choice but to let it wash over you. You have to surrender, let it swallow you, let it rush through you – it’s too big to fight.

What will do that to a person, of course, is heavily subjective. And though I can’t tailor a single book to the fears of all readers, I can, at least, find the way readers experience their many and unique fears when they’ve discovered the breaking point. Every person has one, after all. This is a story about people who meet theirs.

Here is the short answer: In the case of “The Lot,” horror is what we do to ourselves. 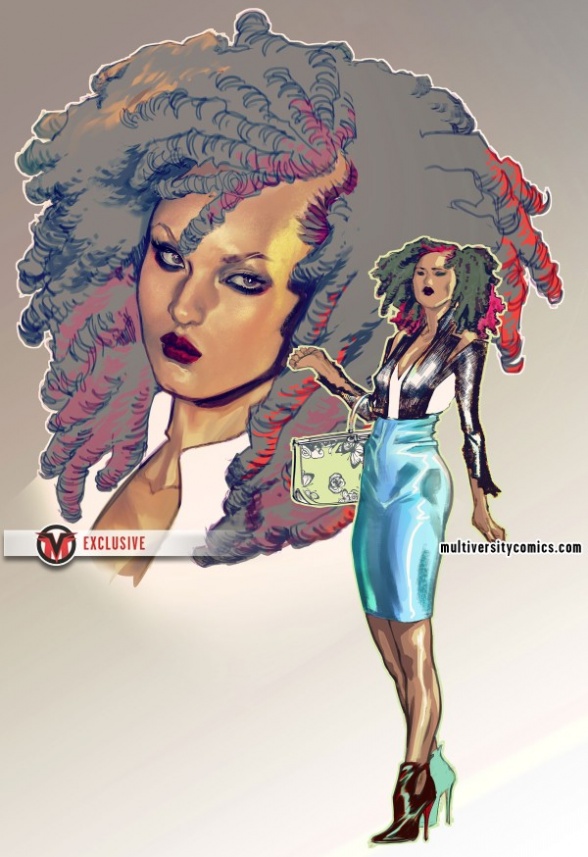 Renato Guedes: I always try to focus on the subtext. The subtext of any great epic, journey, or mythical story is always about an inner journey, an inner quest, a battle against internal monsters or fears. It doesn’t matter if the protagonist is Odysseus or any other character, your challenge is personal. A horror story is no different, the horror is psychological, whether the avatar is Bela Lugosi or a puppet. So this is my challenge here. In each camera or lighting choice, everything must converge to a symbolism that denotes fear and a disturbing environment – the background and stage for the characters and monsters.

The main players in this story are all LA, Hollywood types. These are characters that manage to either be adored or despised by audiences, depending on the tone of the piece. How did you go about making sure that these characters didn’t fall into stereotypes?

MB: I’ve lived in Los Angeles for five years. You meet a lot of fascinating people out here, and, if you’re lucky, you become friends with the people who aren’t just fascinating, but good. All of the characters have bits and pieces of my friends in them – their work ethic, their glamour, their power of analysis, their ambition, their commitment to their ethics, their knowledge of Los Angeles as only a native Angelino can experience it. They’re written with immense love because they are known.

There have been a fair number of stories involving haunted productions: films, books, etc. But I’ve never read one where the haunted object was the location itself. What was it about the soundstage that made sense for it to be the center of this chaos?

MB: Here is a space where stories are told. The lot itself is also Los Angeles – here is the stage to which so many people come, eager to perform, eager to be immortalized. Here is the canvas on which so many wish to paint their story, to have it seen and cherished and adored. A place like that – the site of so many stories, so many fictions, so many overflowing ambitions and griefs and disappointments, so much lust and hunger and thwarted rage – must become absolutely rancid with emotion and the geological layers of human misery, after awhile. Upsetting and unexpected things can sprout up like mushrooms in a compost like that.

Renato, drawing monsters is always fun, but the designs can be tricky. You want the creature to look unique but still be recognizable as a fearsome creature. How did you go about designing the creatures of this world?

RG: It is the way of showing the creature that produces the horror. Successive technical mistakes can turn a horror sequence into something pathetic and funny. The balance of what to show, what to leave implied, empty spaces that are filled by the mind with the absence of elements or the solidity of shadows – I think the context is what turns a cool concept into a fearsome creature. 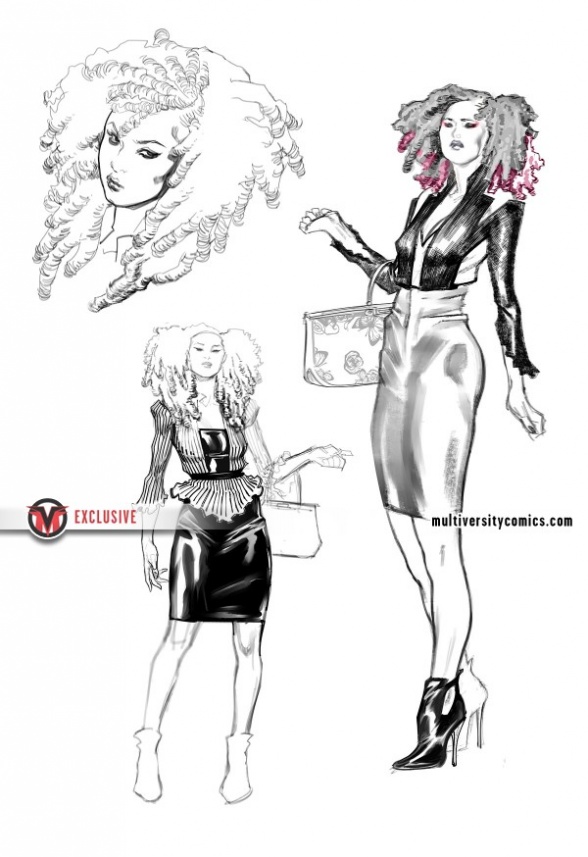 Was there something about the 1970s, and specifically the cinema of the 1970s, that made sense as the tonal counterpoint of this story?

There was a sudden sense of being off one’s leash, for better or worse. Horror suddenly leapt into the extreme, the outlandish, the intentionally offensive, the deliberately tasteless, spraying in all directions in the hope (?) of finding a boundary that could not be crossed. Everyone experimented with everything. There was a bit of riot, reveling in the artistic freedom, the absence of the consequences – and in a way, this story is about the consequences coming home to roost, fifty years late.

When you’re working on a comic, how much reference do you typically use? Would you use more for a project like this where there are specific tones or allusions in the script?

RG: Yes, I always try to produce my own reference, so I have a real basis to maintain consistency. But this is something fascinating to me – all the research and study to create the universe before starting the project is really exciting.

Marguerite, when working on a project like this that is so specific in its tone, do you find your scripts being more detailed and reference-heavy than you would be if the story had less retro elements to it?

MB: Haha, I am, unfortunately, obsessive when it comes to reference. Really, I feel anything the artist doesn’t need to do, the writer should be doing for them.

It feels like dereliction of duty to say “A girl walks into a bar” and fuck off. What girl? What does she look like? How does she self-express? What does she wear, what is she thinking about, what’s the weather, what’s the bar—punk, Irish, lesbian, karaoke? All these things contribute to the story and I’d be setting the artist up for a loss if I left them to figure these things out from high context.

I feel that the clearer I can be in vision and intention, the better I can tailor the story to the strengths of the artist, the happier I can make the artist, and the better the story will be for it. The side effect, of course, is my scripts end up as long as novels, har har.

Finally, what should our readers be boning up on in the 10 months or so before this book sees the light of day? Is there a particular film that you’d encourage readers to watch to understand the tone of horror that you’re looking to emulate here?

MB: Nothing at all, frankly. Horror—like comedy—is one of the two most subjective genres. What you find scary, like what you find funny, will depend entirely on the person, and I’d be setting us both up for the loss to assume your traumas and your joys are the same as mine.

I will say, though, this book will hit different for those of us here in Los Angeles. Most of us have come from afar with our dreams and ambitions and the stories we’re bursting to tell, the sacrifices we made in the hopes of telling them.

“The Lot” is no exception.