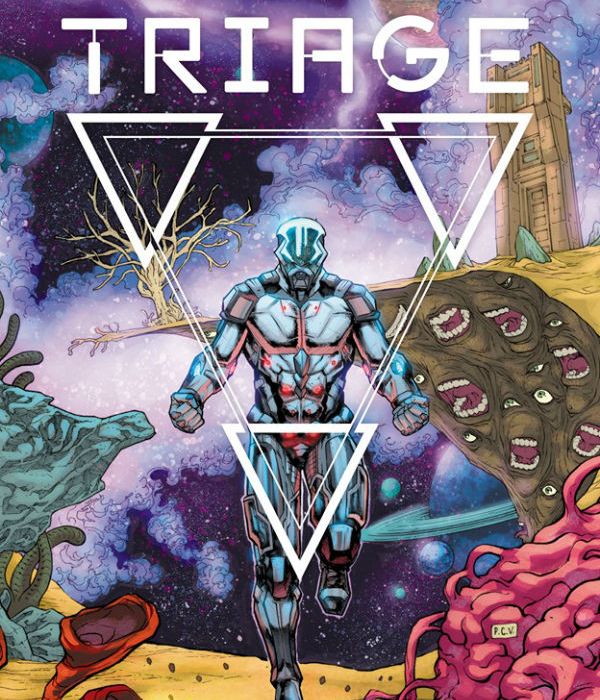 There comes a time in all creator’s lives where they must leave the nest and take that leap and fly away on their own adventure. Creator Phillip Sevy takes his first solo flight this September with his new comic, “Triage,” from Dark Horse Comics. Known for his work on comics like “The Freeze,” “Tomb Raider” and “The House” this new series marks his first solo effort in the world of comics. “Triage” follows a nurse named Evie Pierce who “awakens to an unfamiliar world alongside two other women–one, a young and snarky superhero; the other, a hardened rebel military commander of a post-apocalyptic world.” From there the adventure begins.

To find out more we at Multiversity were able to talk to Phillip Sevy about the new series “Triage” and his first time as the sole creator on a book. Phillip discusses the differences between a team and solo project, female led narratives, and publishing at Dark Horse Comics. A big thanks to Phillip for taking the time to talk “Triage” and be sure to look for the first issue this September 4th in stores and online.

A lot of readers will know you from your work on titles like The Freeze, The House, and Tomb Raider. Triage feels like a very different adventure for you. What can you tell readers about Triage and for those who are fans of your work what can they expect from you in this series?

Phillip Sevy: If, as comic creators, our contributions to series were like mixing in a little of our own personal drug into each book – “Triage” is like mainlining 100% pure, uncut Phillip – ha ha! “Triage” is about Evie Pierce – a nurse struggling with an identity crisis after accomplishing all of her dreams and goals and realizing they don’t actually make her happy or leave her fulfilled. Where do you go from there? While this is happening, she finds herself transported away to a bizarre, psychedelic landscape along with a brash superhero Orbit and a hardened post-apocalyptic commander named Marco. The three of them find out that they’ve been targeted for death by a being known as “Hunter.” If Hunter kills all three of them – all existence is lost. They much band together to survive, figure out who they are to each other and why they’re important.

Triage is your first creator-owned series where you are doing everything right? What made this the series you wanted to tackle all on your own? What has been the biggest difference in the creation process with Triage versus either doing just writing or just art?

PS: For “Triage,” I’m writing, penciling, inking, and coloring the book. I’ve got an amazing Letterer in Frank Cvetkovic, but I’m doing the rest myself. I’ve always wanted to move into the “Cartoonist” arena in mainstream comics. It doesn’t happen very often and it’s been a goal.

“Triage” was a great first large-scale effort in that area because it embodies everything I love about comics – crazy stakes, wild ideas, soap opera emotions, and ambition. Working on the book has helped me understand why you don’t see too many mainstream cartoonists in comics these days – ha! It’s two to three times the amount of both physical and emotional work than I had thought it would be. I absolutely love it – but it’s an investment of the most personal nature.

In the actual creation process, I still work linearly (script, pencils, inks, colors), but there is a circular flow to the creation of the book. While penciling, I can and do rewrite dialogue and scenes to work better. While inking and coloring, I will fix or change things in the art. And while writing, I’m visualizing the entire process. It’s a more holistic approach to creating comics.

Has this series allowed you to take more risks as a creator knowing it is just you on pages?

PS: It’s both allowed me and forced me to take more risks. When you’re working with a team, you trust that everyone is bringing their A-game, and you rely on that. The beauty of comics is that if done right, 1+1=3. Doing everything myself, I know that I can’t blame Frank if the story or art doesn’t work. I have to push every boundary I can as a creator in order to produce the best work I can – because it’s all on me. If you like it, awesome! If it doesn’t click with you, I’m sorry – that’s ALL on me.

You worked on “Tomb Raider” which obviously features a prominent female lead character in pop culture. Triage also features a female lead, Evie Pierce as the protagonist of the series. What interests you most about story focused on a strong female driven narrative? Why do you love and will readers love reading about Evie?

PS: Evie is both a very strong and very vulnerable character. With her, I’m exploring the idea of we see ourselves and how we compare ourselves to those around us – how we will so easily see others around us as better while we see ourselves as not good enough. Evie’s loss of self and identity – her uncertainty mirrors some major events I’ve had in my life. I’m using that feeling and struggle as a place for her to start. But just because she’s struggling internally, doesn’t mean she’s a weak or passive character. She’s smart, aggressive, and funny. That juxtaposition keeps me, as a creator, engaged with her.

Outside of Evie, Orbit and Marco are characters that are a blast to write and draw and play heavily into who Evie is and how she grows. The interactions and compliments between them really give the series both heart and depth.

And we haven’t even mentioned the fourth main character – Tab – Evie’s girlfriend. She’s my favorite part of the series. Just read it. You’ll see.

The cover for the first issue is pretty insane in the best ways and opens up a lot of possibilities for what the tone of this series might be. What is the tone and style readers can expect from the series?

PS: In “Triage,” I’m setting out to accomplish a few different things. Obviously, the first is to make a great comic. That’s a given with any comic. The second, however, is a much more tricky goal (both in execution and description of the goal). “Triage” is a love letter to COMICS. What I mean by that is that Triage was created to be a COMIC. There was nothing in the creation or execution of the story that was meant to make you think “This would make a great movie/TV show/other medium work.” It’s meant to revel in its COMICness. My goal is to illicit the feeling you had as a kid, first getting into comics, where the expanse of the genre blew your mind monthly. Where comics did stuff you didn’t think anyone else could do. I look at the late 80s and 90s “X-Men” comics I read as a kid that got me hooked – they were bold, crazy, dense, existential, and ambitious. Look at the origin of Cable and I need not say more. Though I don’t have 16+ years of Claremont style buildup, I want Triage to rouse that sense of excitement that comics have when you first discover them.

So, with that, the tone and style is Sci-Fi action/adventure. It’s big and dense and fun and fast.

When it comes to creator owned work the options are growing exponentially for creators to get their own work published. What makes Dark Horse the place for Triage especially with it being your first creator owned release?

PS: Having done a lot of “Tomb Raider” with Dark Horse, I’ve gotten to know the people over there really well. It’s a bigger company with lots of employees in lots of areas, and I can say that I really love the people there. I get excited to go to conventions that Dark Horse will be at because that means I can chat and hang out with the people at the company – and I think I know more people outside editorial than in.

I’ve seen the company shifting and pivoting away from a lot of licensed books to returning to their roots of cutting edge, genre-pushing creator owned books. I’m excited to be on the forefront of their shift back to new books and ideas. To be able to do an original book with the company that gave voice to so many comic auteurs like Mike Mignola, Frank Miller, Gerard Way, and Jeff Lemire is a very exciting thing.

With this a series coming solely from your hands and mind how much have you lived in this world you’ve created? Are you working from a larger understanding of the world and lore than may ever make it on the page or is very focused creative process for you?

PS: “Triage” is a five-issue miniseries and I’ve worked really, really hard to deliver a satisfying conclusion to the series. But after reading the first issue, you get a sense of how much bigger the world is. It’s designed to not have the same limits other stories might have. I’m trying really hard to give enough answers to what’s happening on both the micro and macro world-building side of things without derailing the narrative and the characters. I feel the scope of the series will work even better with subsequent reads (I had a good friend read the first issue three times in a row as he was trying to grasp all of what was going on). From the beginning, the narrative, the theme, and the characters have been the focus. That’s what’s important to me, but there’s been lots of fun tidbits around them that I’ve had a blast developing. There are many, many stories I could tell inside this world.

With this being your first creator owned series do you think it will feel any different on September 4th when the first issue drops and finding out what readers think about the series for the first time? What do you hope readers are able to take away from this first issue?

PS: Ha! I’m gonna have my therapist on speed dial that day. I really love interacting with readers and fans of the books I’ve worked on. I know the adage is to not read reviews. But I totally do. Having been in the industry a few years now, a negative review doesn’t really phase me. Not everything is for everyone. However, I’m sure when “Triage” comes out, I’ll be an exposed and vulnerable nerve – for both negative and positive feedback. I’m super looking forward to it, but I know this series represents me on a much more personal level than any other work I’ve done thus far.

My hope and goal for the first issue is for people to be excited to read the next issue. There are lots of questions posed and ideas setup. There aren’t lots of answers (but if you come into stories expecting answers in the beginning, maybe stories aren’t for you – lol), but I hope I’ve done the work to make the book something that excites you, tickles the imagination, and makes you want to read what happens next!