Events are common place in the comic medium nowadays. Likewise, Venom and Carnage have become more common and widely used characters in and outside of Spider-Man comics. However, in the 90’s, events and the symbiotes were not as prevalent. That was until “Maximum Carnage,” one of the biggest things to happen to a young comic reader in the 90’s. This year, Marvel returns to alter Cletus Kasady in “Absolute Carnage.” To kick off this event, Cullen Bunn, Alberto Jimenez Alburquerque and Joshua Cassara team up for the special “Web of Venom: Funeral Pyre.”

“Funeral Pyre” catches up with Carnage as he hunts former symbiote hosts and killing them. “Next on his list is Andi Benton, formerly Mania, who’s back to living in Philadelphia and without any symbiote to save her…” To learn more about this special issue, Carnage and Andi we were excited to speak with creators Cullen, Alberto and Joshua about their work on “Funeral Pyre.” The team discusses bringing horror to heroes, dealing with a fan favorite character and kicking off “Absolute Carnage.” A big thanks to the team for taking the time to answer our questions and be sure to look for “Web of Venom: Funeral Pyre” in stores this Wednesday, July 24th. 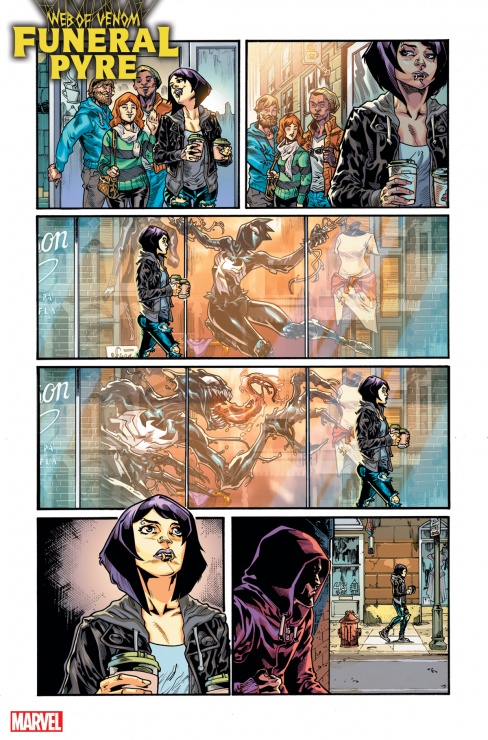 Venom, Carnage, Spider-Man are all names that are going to draw in readers. What is “Web of Venom: Funeral Pyre” and how do you approach an issue like this?

Cullen Bunn: “Funeral Pyre” is a single over-sized issue that leads into something big and crazy. This is a horror story through and through, exploring some psychological trauma that our lead character Andi is suffering through, some thriller-like horror as Carnage arrives to hunt down Andi for his own nefarious purposes, and some supernatural and even cosmic horror as the pseudo-religious aspects of Carnage’s quest — and Andi’s connection to the infernal realms — comes into play.

Alberto Jimenez Alburquerque: It has been my first time drawing Venom and Carnage, (also Mania), so it’s been a bit nerve-racking. However, I’ve had all the support from Cullen and the editorial staff so I’ve felt really comfortable and motivated instead of overwhelmed. It’s an issue full of action with really cool stuff to draw so I just tried to enjoy as much as the deadlines would allow me.

Joshua Cassara: It’s equal parts excitement and fear when it comes to working on a book with marquee characters. But the fun is having the freedom to make it our own since it’s a separate but very consequential story leading into “Absolute Carnage.”

How do you bring the element of horror to super heroes? What makes a good horror comic?

CB: Far too often in comics, horror elements are played for laughs. There’s a place for that, sure, but I believe that even in a humor/horror mash-up, the horror element needs to be scary. So, a good horror comic needs everything any other comic needs—character, plot, pacing—but it also needs to be unsettling and scary.

AJA: Horror is very difficult to depict in comics because we don’t count on music, sound and moving pictures like movies do so we need to find other strategies… I tried to play with camera angles and eerie shadows to try to create tension and suspense. I think that’s what makes a good horror comic, keeping the reader engaged with suspense and ambiance. Hopefully we achieved that in this issue.

JC: Cullen lays down the framework and he legit knows how to do horror, so the pacing is all there. It’s just about executing the right expressions and angles. Oh, and drawing the creepiest things the editors will allow.

As artists, I would think a lot of the tone especially for a darker story is going to be set with your approach to the series. What have you guys looked to do for this series to showcase the horror and chaos associated with Carnage?

JC: I only got to draw a small part of this story but I hoped to set the table with a really shocking opening visual and to give Andi/Mania a proper introduction, showing her personality as best as I could following Cullen’s direction.

AJA: I think I answered a bit to this one on the previous question but to focus on Carnage, I tried to use close ups on him to depict how terrifying the character is, to emphasize his cruelty. Also, some gory scenes help with that too! 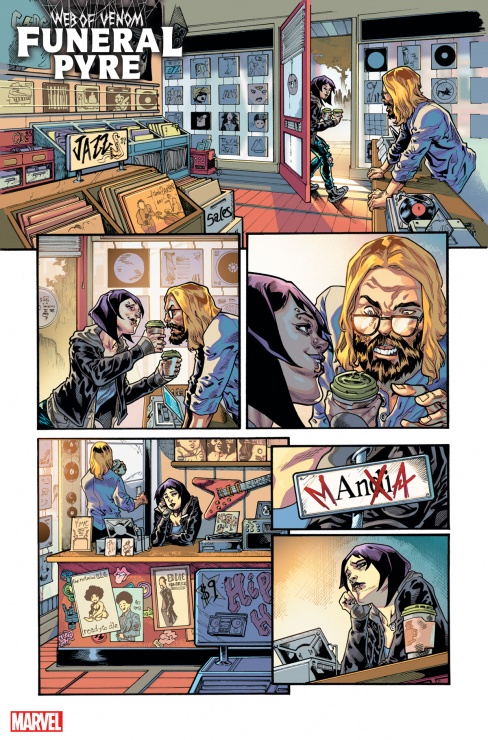 Cullen, you co-created Andi Benton and she happens to be the target of Carnage for this series. What is it like returning to Andi and what makes her the perfect protagonist for this series?

CB: I’d write any and every Andi Benton story ‘til the day I died if I could. I absolutely feel a strong connection to the character. Writing her in this story was amazing, but a little sad, too. I never know which book will be the last in terms of writing characters I love. So, I wanted this to be a great Andi story, but I also knew I was gonna be really, really mean to her in the pages of this book.

CB: There’s no connection to the original “Funeral Pyre” story. It’s just a nod to that era, I guess. Andi wouldn’t have been alive in the 90s, (especially considering comic book time), but there are certainly some 90s-like trappings in this story. This wasn’t intentional. I didn’t even realize it until answering this question. You’ll know them when you see them, for sure. Andi may not be the most 90s thing in the book, but she’s certainly the most METAL.

AJA: I don’t think they’re very related but I’m sure some people could find some links. I checked that 90s series before I started drawing just to have a reference, but Punisher and Venom are not a good starting point for Carnage and Mania, haha.

JC: I listened to a lot of 90s punk rock while drawing it. I’m so heavily influenced by that era and the art. I’ll defend 90s comics to the death.

Cletus Kasady was a serial killer before becoming Carnage and now he is on the hunt to kill other/former hosts. Your issue centers around Andi’s confrontation with Carnage. This has very much a killer versus final girl vibe. Is that something you thought of going into the series? Which final girl would you think Andi is most like?

CB: Yeah, I wanted this story to have the feel of a slasher story, with readers always in fear, wondering if Andi will make it or not. As for final girl comparisons, that one’s tough. Let’s go with one of the toughest around—Ripley in Alien. Indeed, in this story, Andi finds herself beset by a terrifying, almost alien creature. She’s familiar with Carnage, but she’s not ready for this version of Carnage.

Many readers have a soft spot for the 90s “Maximum Carnage” and the character in general. How does it feel to be kicking off this “Absolute Carnage” event?

CB: I didn’t realize that this was going to be the opening salvo for “Absolute Carnage,” but that’s pretty cool. I think this story will do well in setting the tone. If nothing else, in these pages you’ll see a more fearsome and terrifying Carnage than you may be expecting.

AJA: It can be a bit nerve-racking and overwhelming…definitely some pressure there! However, I try not to have that in mind when I’m at the drawing table or I’d get paralyzed and couldn’t draw a line. I just focus on doing the best work I can with the time I’m given and I try to make things look good, crossing fingers so the readers like the final product.

JC: Amazing. I’ve seen a lot of what our dark lords Donny Cates and Ryan Stegman have been cooking up and it’s glorious. Happy to be even a tiny part of it. 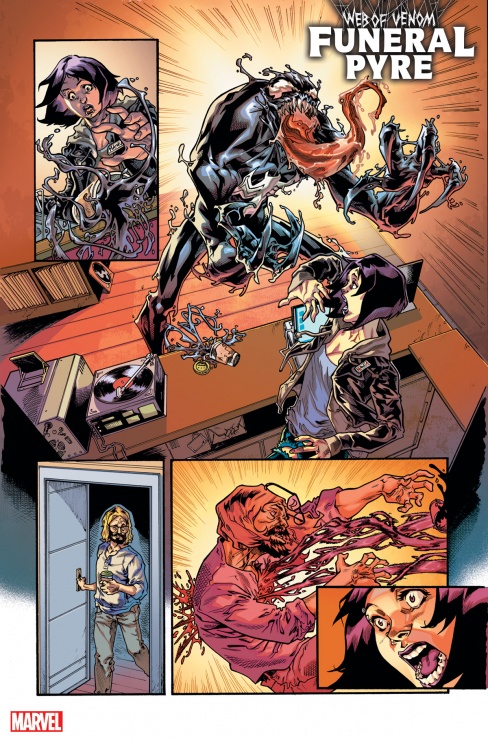 One of my favorite things about the symbiotes is that they are really kind of a blank canvas. There seems to be a lot of room for creators to explore the lore, look and impact of the symbiotes. What was your approach to the symbiote as a creative team? Is there anything new you are hoping to bring to the history of the symbiotes?

CB: With this story, I leaned into how a symbiote—especially one like Carnage—might work in a gruesome horror story. You’ll see some real symbiote nastiness here. I also wanted to explore the lasting psychological impact being bonded to a symbiote might have on someone. And I think Andi’s life post-symbiote reveals some weird and scary possibilities.

AJA: On my end, I tried to continue the graphic inheritance of my predecessors with a little twist of my own… Symbiotes are living entities and I try to make them look alive, move and be dynamic.

JC: I just wish I got to draw more of them. Alberto did the heavy lifting on this one and it’s awesome.

What do you hope readers take away from this issue and your work on it?

CB: Of course, I want readers to be entertained. I want them to fear for Andi. I want them to demand more Andi Benton stories, because I’ll gladly write them. If she survives. There are a couple of lines in the book that, as I wrote them, I realized hinted at something much bigger for Andi. It would be nice to explore that.

AJA: Comic books for me have always been entertaining, a boring book always disappointed me, so I hope the readers enjoy it. I had a lot of fun drawing this issue and I hope it shows. I hope everything is clearly narrated, in an entertaining way and that the readers can’t wait for what’s coming next. And if they like it, tweet Marvel and let them know! Haha.