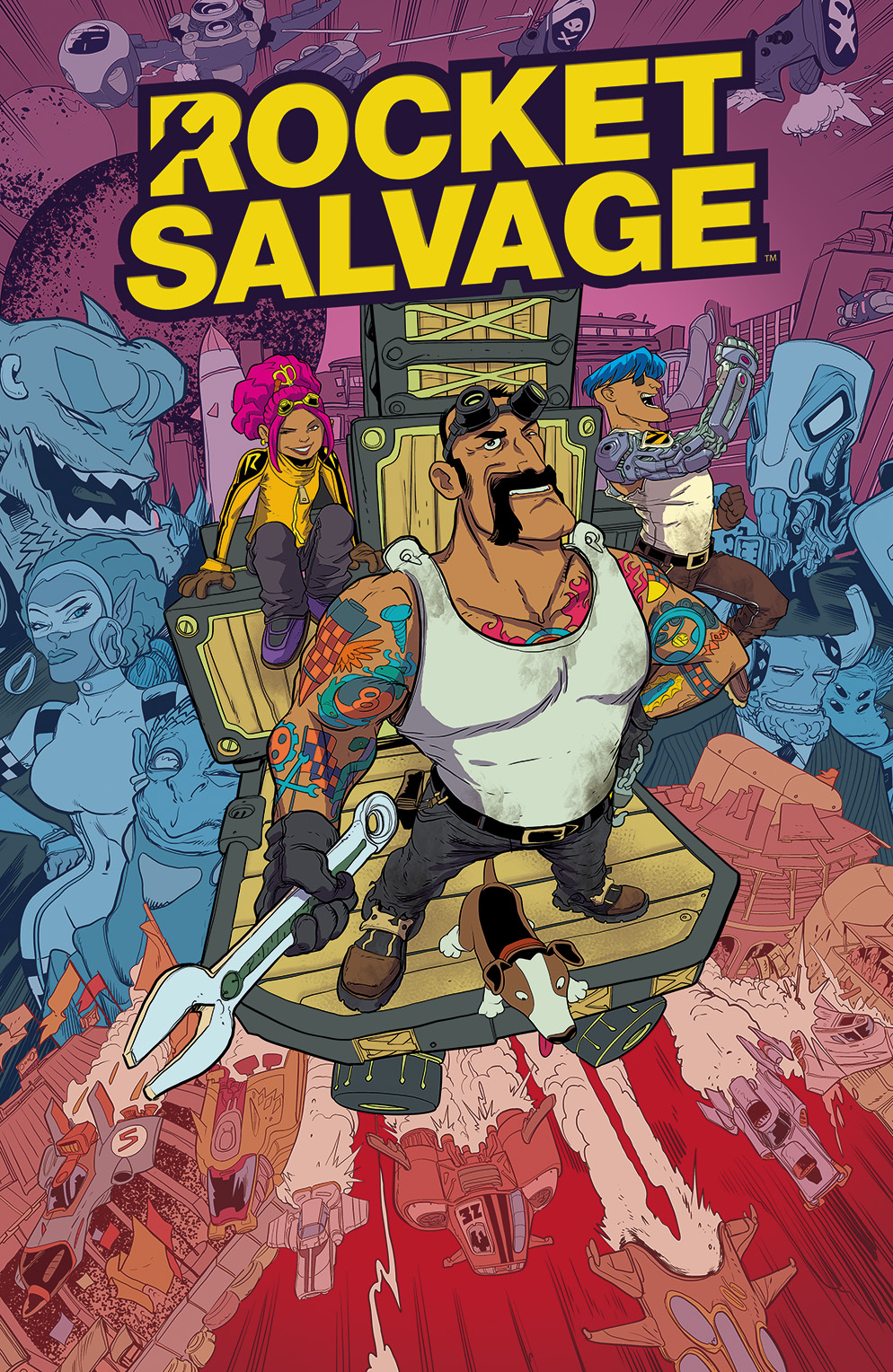 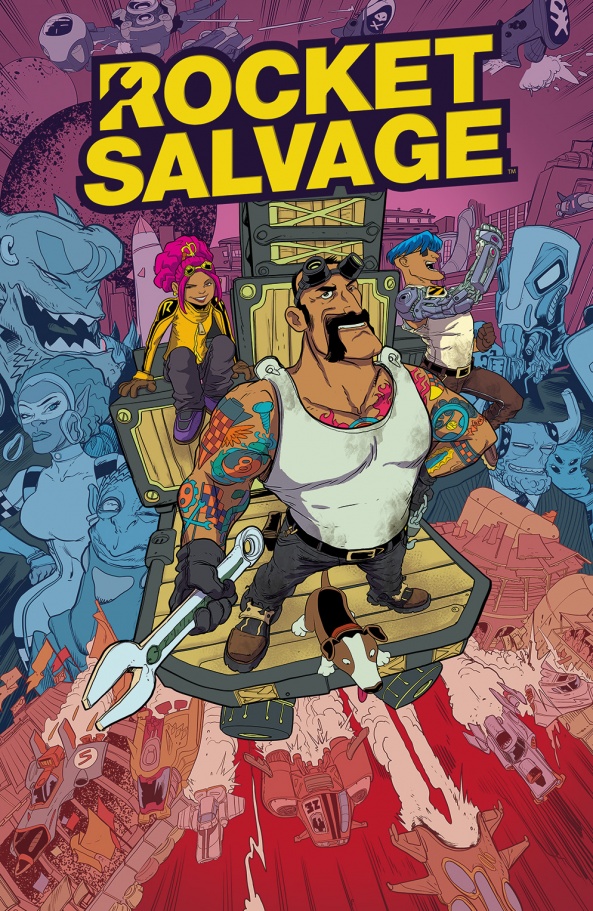 Family is often a weird thing. You may not always get along with these people, but you’re still a part of the same whole. It may not always be easy, but a family can often make it work. That’s the sort of sentiment that’s at the heart of “Rocket Salvage”, a new Boom! book from writer Yehudi Mercado and artist Bachan. Primo Rocket must raise his two clones even as he becomes embroiled in a larger battle between two galactic empires. It’s not easy, but Primo is a salvager and knows how to make things work.

Yehudi, you’re a writer/artist and have filled both roles on some of your other books like “Pantalones, TX”. What made you decide to partner with another artist on “Rocket Salvage” and what brought Bachan onboard?

Yehudi Mercado: I was going for a slightly older audience for Rocket Salvage so I knew I wanted it to have a different look. My first book, “Buffalo Speedway”, is a straight up comedy about pizza delivery drivers and “Pantalones, TX” is wacky Saturday morning cartoon about little outlaws and “Rocket Salvage” is sci-fi action with a twist of family dysfunction. I wanted “Rocket Salvage” to reach a broader audience so when Rebecca suggested that we might want to get another artist I was open to it. And then when she suggested Bachan I said, “Hell. Yeah.” Bachan came on board right when I was gearing up on the “Guardians of the Galaxy” mobile game that I wrote and art directed, so I was thankful to share the workload.

Bachan, a large part of your work has been in Mexican comics of various kinds. You did some work with Boom on “Imagine Agents” last year and now are doing art on Rocket Salvage. How does it feel to be working in the American market versus the Mexican market?

Bachan: That would take a long time to answer… to keep it short, I’d say that there is no Mexican market. Comics in Mexico pretty much collapsed in the early 90’s and I got my start just as things fell apart. Most of what I’ve done here is self produced, or small strips in magazines. It’s a fanzine market, to be honest. I really got my training doing storyboards and animatics for ad agencies. That is still my main occupation. I am enjoying the opportunity to do comics, that have always been my first love. This is what I wanted to do when I started drawing. 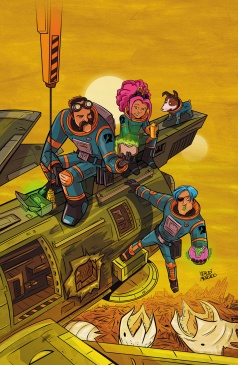 “Rocket Salvage” is the story of Primo and his two clones, Beta and Zeta, who he raises like his own children. How do the family dynamics and the interactions between the three play into the story?

YM: The family is the heart of the story. Primo is trying to redeem himself for past mistakes by living a righteous path and raising his harvest clone as his son. Primo salvages things, he saves things. When his family unit is threatened he doesn’t just give up, he’s going to go to the ends of the universe to salvage his family. No matter how much they get on his nerves.

As both of you are artists, how much collaboration is there on the look of the book? Is there a lot of back and forth between the two of you or is it pretty one-sided?

YM: I had an initial set of designs for each of the main characters that Bachan used as a jumping off point. I don’t tend to gravitate to cold realistic renderings. Bachan has this insane ability to make the scenes really detailed like Moebius and really fun like Rob Guillory. His drawings are alive. It’s been a great experience.

B: I just had a lot of fun doing my interpretation of Yehudi’s designs. Just trying to figure out what every thing was on his drawings, and trying to come up with an funcional looking object. The cover for book 5 is actually just me ‘inking’ on top of his drawing. It was a blast!

You say Beta is Primo’s “harvest clone”. What exactly does that entail?

YM: Primo was a cocky speeder racer champion. Each racer has a harvest clone as a spare tire for organs and body parts. If you notice, Beta has an eyepatch and a prosthetic metal arm, so Primo also has that extra layer of guilt.

I like that you keep saying that Primo is a salvager and makes things work. Often, that’s sort of how family is. A bunch of people who may not always mesh well together, but they make it work somehow. Is it safe to say that’s playing into how you write the story a little bit?

YM: Yes exactly. Primo knows that the only way the family unit can stay together is by working hard and keeping their nose out of the intergalactic war. By not choosing a side between the equally evil Republic of Galaxies and the Galactic Republic, Primo is forced to live and work in the underground. He has to teach his kids right from wrong when the whole galaxy is wrong. 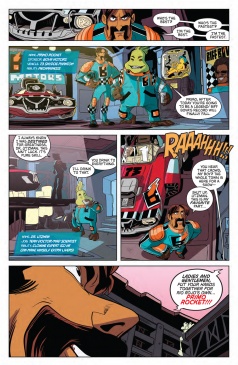 In addition to the family story in “Rocket Salvage”, there’s also a larger, broader story that puts Primo and his family in the middle of two warring galactic empires. How has it been balancing the two scopes, and not losing sight of either?

YM: It’s been a tricky balance. This originally started as a graphic novel so I had a slower build up before I jumped into intergalactic wars and the larger universe. There were a few key plot twists and reveals that I originally envisioned for the sequel, but the more we got into breaking up the story into 6 issues the more it needed the zigs and zags to leave the reader with a cliffhanger at the end of each issue.

Bachan, it seems like we’ll be looking further into the galaxy and seeing a lot more of the other races that populate space as the series goes on. What, if anything, are you drawing from as you bring these other creatures to life?

B: I don’t have a set system. I’m always drawing, and weird characters just pop up in my sketchbooks. I use that as a sort of creature ‘warehouse’. Whenever I need some new character, monster or machine, I take a look at my sketchbooks. Almost all I draw into my comics started life first in my sketchbooks. As a general rule, I just try to draw things that I haven’t seen before.

You also mention doing the cover to issue 5. How far along with the series are you guys right now, weeks ahead of the release of the first issue?

YM: Right now I’m tweaking the script for #5 and have a rough first pass of #6. After I get the final colored pages I tweak some of the dialogue to better match the visuals. Bachan is going to have to take a vacation after 5 & 6, they are both all-out third act insanity.

B: I’m in the middle of drawing book 4. -somewhat slower than I’d like, since I have to juggle this with advertising work-

Beta and Zeta are both clones of Primo, but they’re very much their own person. What sort of thought have the two of you put into not only making them have unique personalities, but also unique looks? 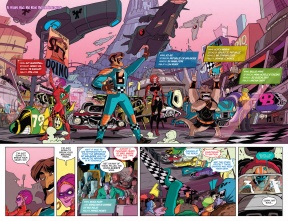 YM: Beta is a little bit of a dim bulb, some of the side-effects of being nothing more than spare parts. No one has ever let a harvest clone grow up so no one is really sure what to expect. Zeta on the other hand came out a super genius. Primo is challenged with trying to parent two very different kids. Dealing with Beta has its own set of frustrations because it’s like having to raise yourself, you see every flaw magnified. Primo knows Zeta is already smarter than he’ll ever be so he needs to make sure she’s using her brains for good because she has the potential to slip into evil genius territory.

B: I draw them as I read them in the script. I just add a bit of the emotional factor in them. I see Beta as a Great Dane: Very big, strong, not too bright but kind-hearted. On the other hand, I guess there is a bit of an evil streak to Zeta. Like a chihuahua. They can be mean!.

Since you’re almost done with the series, before issue 1 even sees print, there’s going to be no outside influence on the series, no fan expectations playing into later issues, or anything of the like. How does it feel to basically be releasing this complete and just watching as reactions roll in for each issue?

YM: That will be interesting to get feedback in segments, I hadn’t really thought about that. Everything I’ve done has just been released as is in one big drop. Our brilliant colorist Jeremy Lawson was shocked to see the inks for the cover of issue #6 because it reveals a pretty big surprise and I hadn’t really taken those kinds of reactions into account. I welcome good reactions and bad reactions, as a creator of content any reaction is fantastic.

B: I’d call it ‘old-school’. This is the way all comics went when I started; I actually NEVER got any feedback from readers. -Again, a Mexican comic thing-, then I started doing webcomics, which is the exact opposite; you get immediate feedback, and sometimes, the story DOES change responding to that whether consciously or unconsciously. This is probably in the middle for me. Though the story is set, we will find out what readers think, and I’m looking forward to see that.