This week saw the release of “Youth” #1 from Curt Pires, Alex Diotto, and comiXology Originals. The series, self-described as “Larry Clark’s Kids meets Chronicle. X-Men by way of Frank Ocean,” is a story about young people and their spur of the moment decisions that may not be exactly the wisest. The series is four issues, released weekly, and each Friday during that time period, we’ll be chatting with writer Curt Pires about each issue. Let’s get right to it. 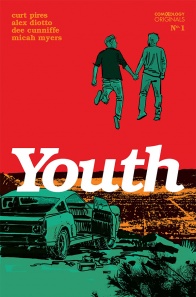 YOUTH is a coming of age story that tells the story of two queer teenagers as they run away from their lives in a bigoted small town, and attempt to make their way to California. Along the way their car breaks down and they join up with a group of fellow misfits on the road. Embarking together in a van travelling the country they party and attempt to find themselves. And then something happens…

YOUTH is Larry Clark’s KIDS meets CHRONICLE. X MEN by way of FRANK OCEAN. It smashes together the violence of coming of age with the violence of the superhero narrative–as well as the beauty.

Even if you’ve never had the experiences of Frank and River, both characters represent a certain frustration that is easily recognizable as simply ‘being young.’ Obviously, River and Frank have had experiences that made them mad at the world, but that’s also such a clear sign of youth. I remember working at a movie theater during high school and college summers and hating half the customers just because…well, because I could? What were the important emotions that you wanted to bring out in these characters when we first meet them?

Curt Pires: I pulled a lot of that from personal experience. I remember being in my teens and working at movie theatres, and grocery stores, and people really go out of their way to treat you like shit. It then starts this sort of feedback loop of you hating the job, and hating the customers etc. The thing was these entry level jobs are pretty much all that’s available to young people, so no matter how much hustle you show, how enterprising you are, you’re trapped. I used to write scripts on receipt paper at my grocery job so I could feel like I was advancing myself. I’d transcribe them later.

So much of adult life is based around the idea of needing to have a plan. This is especially magnified through the quarantine, where I find myself making plans for my family, some of which I know will never get completed, but it feels good to have a strategy. The main characters of “Youth” are basically a thesis statement against planning. Is it liberating to write characters who are all id?

CP: It’s liberating in a way, but like you say, running on pure id things tend to fall apart pretty fast. We’ll see in future issues how this lack of planning and impulsiveness really catches up with them. There is value in living in the moment certainly. The present is all we have. But I think balance is key.

River talks about his father in a really touching way. This is a sharp contrast to how we perceive teenager/young adult relationships with parents in most pop culture, but everything he said about his dad, down to his death, is echoed in my own life. Was it important for you to give a character a tether to something more permanent than the fleeting nature of their adventure?

CP: Yeah. I wanted something to emotionally ground that character, so I pulled from my own life. I wrote about watching my dad die of cancer and used River as a mouthpiece. There’s a scene in Mid 90s where Jonah Hill has one of the characters talk about their brother’s death–and it seemed to me Jonah was addressing the tragic death of his brother through that character. It felt brave and emotionally real, and inspired me to do the same.

The book feels incredibly honest and real, even when things get a little out of hand, but then the last page brings the story to an entirely new place. When you were putting the story together, did it start out as a more grounded, personal story, or was there always the elements we see introduced at the end of #1?

CP: Always had that ending, but to me what makes the book interesting is the buildup to the ending. The execution, and then taking this sharp left at the end. It’s like halfway through Kids they got superpowers. No one’s really done that before and I loved the idea.

There are very specific songs played throughout the issue. I love it when comics bring music into them, even if it is not always the smoothest transition. As a teaser for next issue, can you give us the playlist ahead of time?

CP: I won’t give all the songs away, but I can say “Clair De Lune” [by Claude Debussy] is one of the pieces of music.