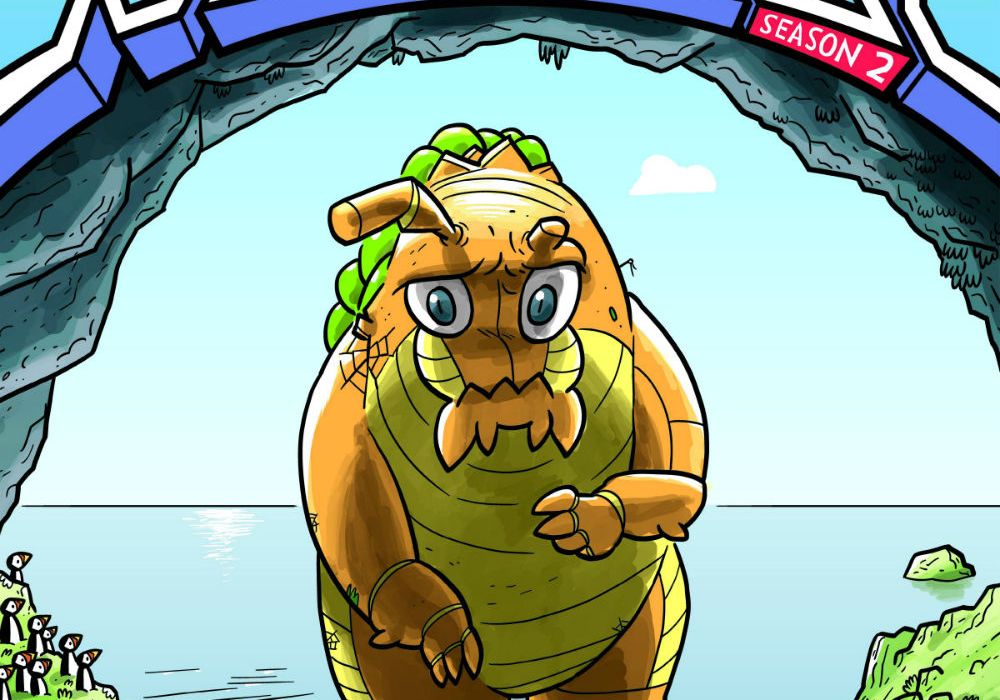 “Kaijumax” has been a Multiversity favorite ever since the first issue dropped. Zander Cannon’s insane mashup of kaiju and prison dramas has been a critical and commercial hit, getting an Eisner nomination and already producing two seasons of the comic. People really like giant bugs and lizards shanking each other and plotting jail breaks, it seems.

At Emerald City Comic-Con, I had the chance to catch up with Zander again after a signing and pick his brain a bit about “Kaijumax”. We chatted about a weird book being conventional, finite endings, prison gangs, research, slang, and more. 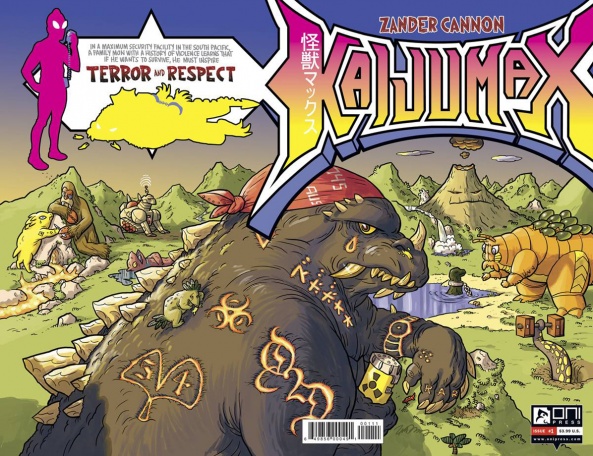 I really like “Kaijumax.” It is a very… unique book. In the best way.

Zander Cannon: [laughs] Yeah, that about covers it.

I think I remember seeing you say somewhere after the second volume ended that Electrogor and Jeong and Chisato and their storylines are pretty much done. If they do come back, it’ll be with different roles, maybe as minor characters. What is it about that finite ending and moving on that seems right for “Kaijumax?”

ZC: I think that as much as we like following characters, I think that we really like to have an ending for them. They don’t have to be dead or gone. Electrogor found his family and he’ll have other problems, but he’s not the main character who we have to follow. I think that’s how stories become about less important things and I think you want to switch to focusing on characters who are going through something more central to their lives. When characters show up again, you can go, “Hooray, it’s this character I love!”. They can do their usual thing, but don’t’ have to be the center of attention.

I think that reflects life a bit. Someone might be your best friend in one decade of your life and someone pops in and out in another decade. It’s just my monster prison that’s just like real life. 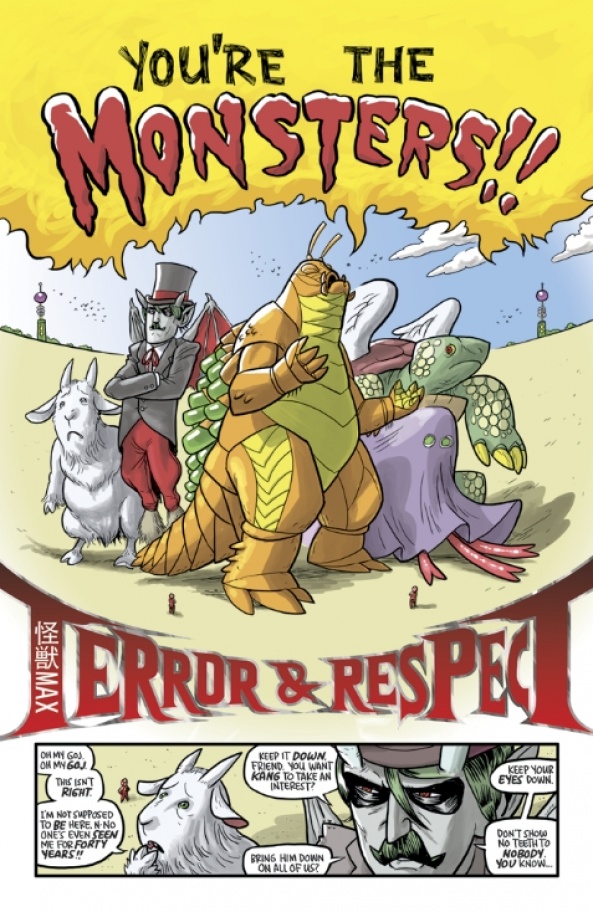 There is almost a bit of a cynical look at their stories. It’s a lot about how you can’t necessarily control what happens to you, good or bad. Like you said, it’s like real life.

ZC: Again, it’s the most preposterous book, but I try to approach it in a way that’s, I don’t know, emotionally centered. So you can you’ve had that experience or recognize that social situation or whatever. The more relatable they are, the more you can like these characters that are in in all other ways completely alien creatures.

You admit it’s a pretty preposterous book. Are you surprised by the reception for it so far?

I mean, it did get nominated for an Eisner.

ZC: It’s huge. It’s wonderful. I never want to do anything that’s not the best I can do, but I kept pitching stuff like this throughout my thirties. Just weird mashup stuff. It wasn’t this, but similar. Nobody was interested in that kind of stuff at all. A lot of it was because I didn’t have a track record or whatever, but I just thought, I’m gonna do it and if it fails, it fails. I am really surprised that people are liking it, but it’s also very much by design. I’m trying to make it a book full of jokes, but then also have some heart, then also have some stakes. I’m trying to make sure that it keeps people’s attention. But yeah, I am surprised that something so silly would grab certain people.

So far, we’ve seen the alien kaiju, the more traditional kaiju, the mechs, and some other groups, but are there any other groups that you’re looking to introduce and focus more heavily on as the story goes?

ZC: I don’t know that I’m introducing any new ones, but we’re going to see more of the Cryptids. In a way, they’re my favorite. I wanted to do more with them in the first season, but a lot of stuff didn’t fit, so I pushed it to the next time. They’re a little like the Aryan Brotherhood, which I think is the world’s worst prison gang. Not that any prison gangs are particularly great, but there’s something awful about them. I wanted to use that to highlight the thing about the prison gang where you’ve got awful people, you’ve got people who are just trapped, you’ve got good people. The third season focuses on the gangs and how they interrelate with each other and how a lot of the stuff in prison is not so much about big splashy stuff, but more about always being aware. Always making sure that no one is sneaking up on you. There’s just a constant tension. 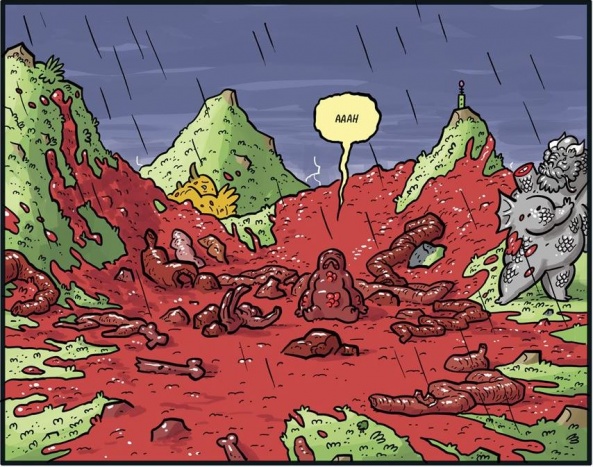 The first season was kind of Electrogor finding his place in prison before getting out. The second is more about life on the outside and life on the run. The third, you say, is about gangs and their interactions. What sort of research have you been doing?

ZC: It’s fun. I’ve been reading a lot of prison memoirs. It’s interesting because there’s gangs, but there’s also races. You’re part of your race whether you’re part of the gang or not. It’s about how dysfunctional and toxic all that stuff is, but it’s still a system with rules. You either follow it or don’t, no matter how tricky that can be.

I wanted to make the action a little smaller. It had been so big in the second season. Fights, battles, and explosion, so it’s fun to say that now the action is happening within a tiny enclosed space and it’s about who’s looking at whom at a certain time.

I have to imagine there’s some pretty grisly stuff in that research.

ZC: I can only read or do so much stuff with prison documentaries. Prison dramas are always a little pulpy and silly, but prison documentaries are so depressing. I’ve been reading some memoirs. In particular, there’s this one just called Prison Stories by this guy Seth Ferranti. It’s this self-published book and it’s riveting. It’s actually pretty light. He’ll have this ongoing story of the weed and heroin trade in this particular prison, then he’ll have these interludes about certain people who either figured something out and came to a bad end or snitched on somebody, then it goes back to the drug deals. Despite the fact that it’s about heavy stuff, he tells it in a very light way, with a great ear for voices. The Puerto Rican guys talks this way, the La Raza guys talk this way, and the guys from Detroit talk this way. It’s really cool. I’ve probably read it four times now. 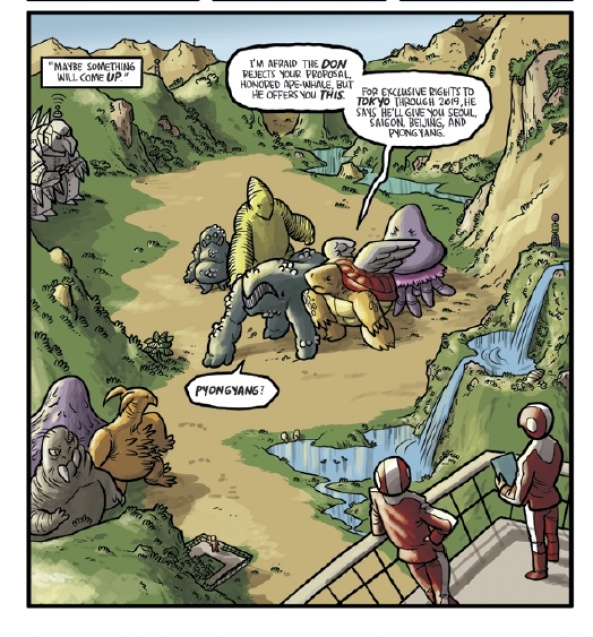 ZC: Too much. It’s funny too because there will be a page where there’s some dialogue or, God forbid, where somebody starts rapping or where someone shows up and I have to design their tattoos, but I can’t just put filler stuff. It’s gotta be a gag. I try to have consistent gag density per page, so even if there’s nothing in the dialogue, there’s stuff in the background that I can add. The way people talk doesn’t matter as much in comics as it does in other things, but it’s fun to have internal thoughts as to certain creatures use certain slang, like only Cthulhu guy uses the “fhtagn” as a swear word. That sort of loose world building stuff is what I like. I’m a sort of natural world builder guy and I have to fight that impulse all the time. When it comes down to it and you have to choose between that something that makes perfect sense and something that’s funny, you have to choose the funny thing every time.

Volume two just wrapped. When can we expect season three?

ZC: Uh… June, I think? April is when the trade for Season Two is out, so June sounds right. The first issue is just about wrapped up. I’m working on the next one. The blind panic hasn’t set in, but it’s coming soon.

Do you have a definite end point in mind, or is this just something that you can just keeping going with?

ZC: I couldn’t do it forever. It’s exhausting. I also think that a story like that, that’s episodes, starts to buckle under its own weight after a certain point. Right now, we have it sort of planned to be six season. They’re in a little of a pattern. The first is in the prions, the second is outside, the third is back in the prison, the fourth is in the women’s prison, then the fifth and the sixth I’m tinkering with a couple of ideas. I feel like there’s not so much an end point, as much as it would start to become unwieldy to keep track of everything.

A women’s prison arc sounds like a lot of fun.

ZC: Everyone keeps saying it’s like Orange is the New Black, but it’s not like that. Yet. But soon, soon it will be.