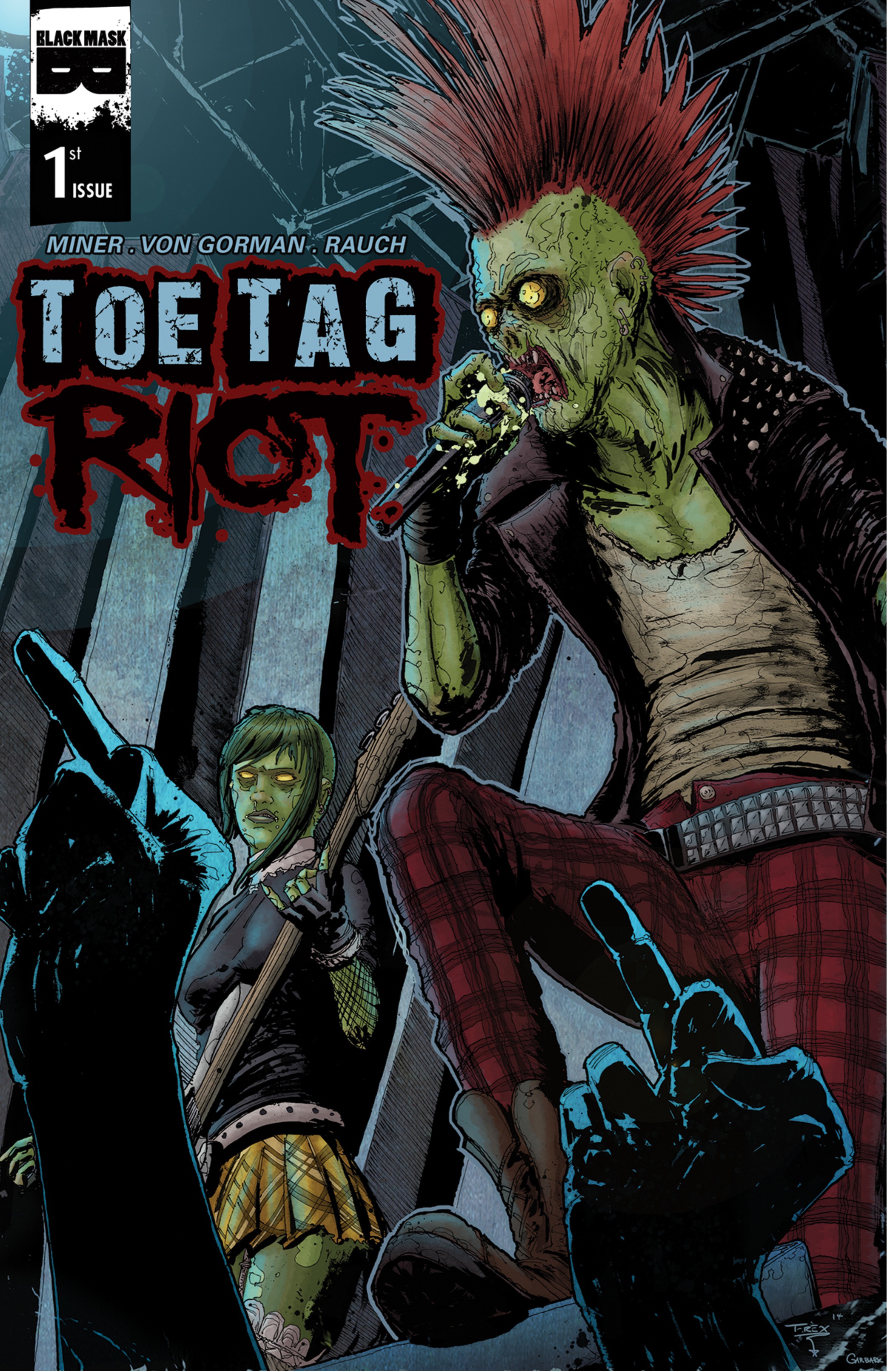 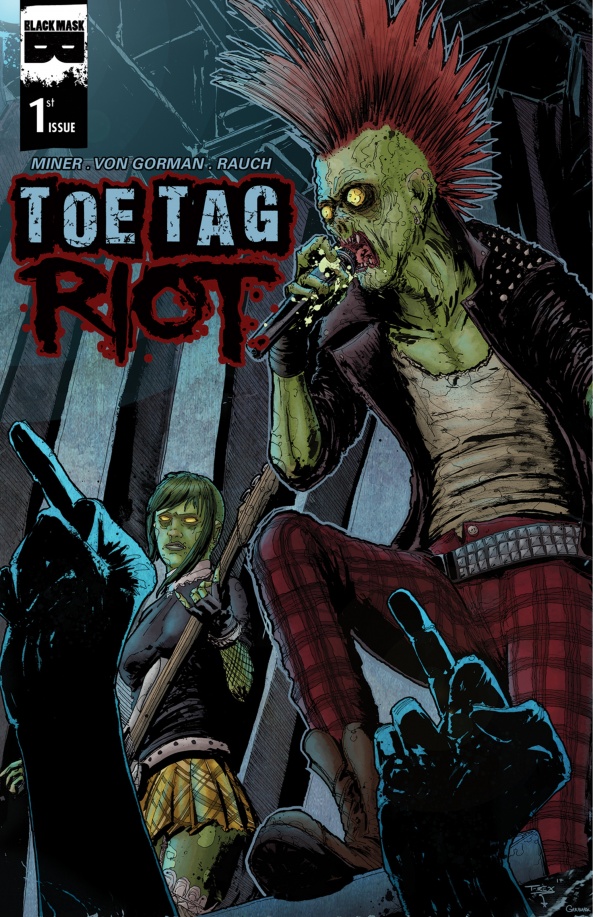 I think most comic fans can agree that, with few exceptions, zombies are mostly played out. But “Toe Tag Riot” is no ordinary zombie comic. From writer Matt Miner, artist Sean Von Gorman, and Black Mask Studios comes “Toe Tag Riot”, a new comic about a band of punk rockers who use their zombie curse to rid the world of bigots, a few mouthfuls at a time.

Read on as we chat with Miner a bit about the book, a pull quote from Westboro Baptist Church, representative comics, and more. Also, be sure to check out a preview of the first issue below. Issue 1 is in stores Wednesday, 11/26.

“Toe Tag Riot” centers on a band of zombie punk rockers who use their curse to battle bigots, and is your fourth book at Black Mask. What made punk rock zombies the next project you just had to tackle?

Matt Miner: Wow my fourth book at Black Mask? I guess you’re right – that’s crazy! Time flies. I wanted to do punk rock zombies because of my love of gory and funny performance art bands like GWAR and my history growing up in the punk scene. It just seemed like a natural fit to me and with artist Sean Von Gorman’s sense of humor we’re able to rock this ridiculous concept of a punk band cursed to become zombies when they play their music.

“Toe Tag Riot” features Westboro Baptist Church, infamous for their hate of homosexuals, as some of the villains. Why were they the perfect problem for a band of zombie punks to tackle? 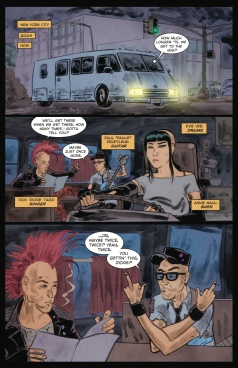 MM: Too often in pop culture, punks are stereotyped as nihilistic “fuck the world” drunks and druggies, which doesn’t accurately reflect the scene at all. All my punk friends have always been highly intelligent, political, socially aware and compassionate people who just care so much about people, the earth, animals, etc that life and the injustices around them become frustrating and maddening.

Westboro Baptist Church are a bunch of clowns – they’re ridiculous nobodies, but they represent this pervasive homophobic hate that oozes into our society, so they were perfect zombie targets.

Speaking of Westboro Baptist, they sort of helped spread the word for “Toe Tag Riot” when it ran on Kickstarter, and even gave you a great pull quote – something to the extent of you splitting hell wide open. Be honest, how much fun has it been messing with them?

MM: So much fun – and getting that “Matt Miner and Sean Von Gorman are insincere pervs… repent before you split Hell wide open” quote from them (now featured on the issue 1 covers) was comedic gold. If Westboro says you’re splitting open Hell then you’re doing something RIGHT with your life.

Anyways like I said, they’re clowns… but they’re great comic book villains and better zombie food. I think once we get to the point where we can collectively start laughing them away as the sad jokers they are maybe they’ll hang up their signs and get real lives.

Like your initial “Liberator” comic, “Toe Tag Riot” was funded through Kickstarter. As someone who’s done a couple of projects, what makes it such a good platform? 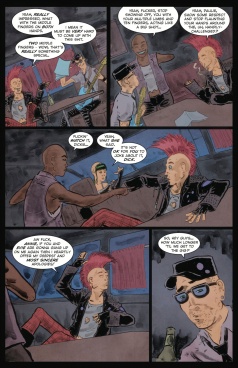 MM: Kickstarter’s great for poor creators who can’t afford to foot the bill on good projects but it’s also great for concepts that reach outside the comic book norm for new readership. Through Kickstarter we’re able to grab hold of people who don’t normally read comic books but might care about LGBT equality or animal issues. Hopefully those people then get into comics on the regular.

“Toe Tag Riot”, like your “Liberator” books, is a bit socially and politically minded. What makes you want to have your comics be not just a cool story, but also speak to some real-world issues at the same time?

MM: I’m heavily inspired by the music I listen to and I’ve just grown up caring about stuff. When I had the chance to make comics that might make a small difference, or one we can poke fun of hate groups in, I took it. Not everything I write or do has a “message” or whatever – even “Toe Tag Riot” is gory and not serious at all even if we’re using it to make fun of various hate groups.

You talk about how “Toe Tag Riot” isn’t all the serious. It’s certainly not compared to the general tone of your past books at Black Mask. How do you switch to writing a book that’s a little less serious and a little more ridiculous in its content?

MM: Well, I just adapt to the story and the tone we’re going for.  Like everyone, I have different emotions and moods and a variety of interests so I don’t really have a problem switching back and forth from something serious and dark like Critical Hit to something tongue-in-cheek like Toe Tag Riot. 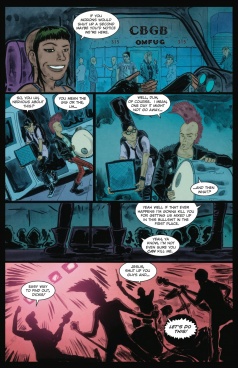 Two of the characters in TTR are an interracial lesbian couple, which we admittedly don’t see a lot of in comics. After reading the first issue, I see that’s treated in such a way that it’s not a big deal at all to most of the characters. I personally really like that while you’re being representative, you’re not making it the focus, but letting the real story take center stage.

MM: Thanks, Leo. Yeah, I mean, nobody cares that Annie and Evie are a couple except the racists and homophobes who will eventually be Annie and Evie’s food. I like comics that represent real life and in real life we have friends who are gay and we have friends who are people of color and it’s not a big deal – I mean, who gives a shit, right? So it shouldn’t be a big deal in our media either.

The zombie curse that’s afflicting the characters in “Toe Tag Riot” is starting to take longer and longer to wear off. What does that mean for the band as they continue to play shows and travel across the country?

MM: We’ll have to see – my guess is that they’re gonna have to hurry up and find a cure before they’re green and rotting full-time!