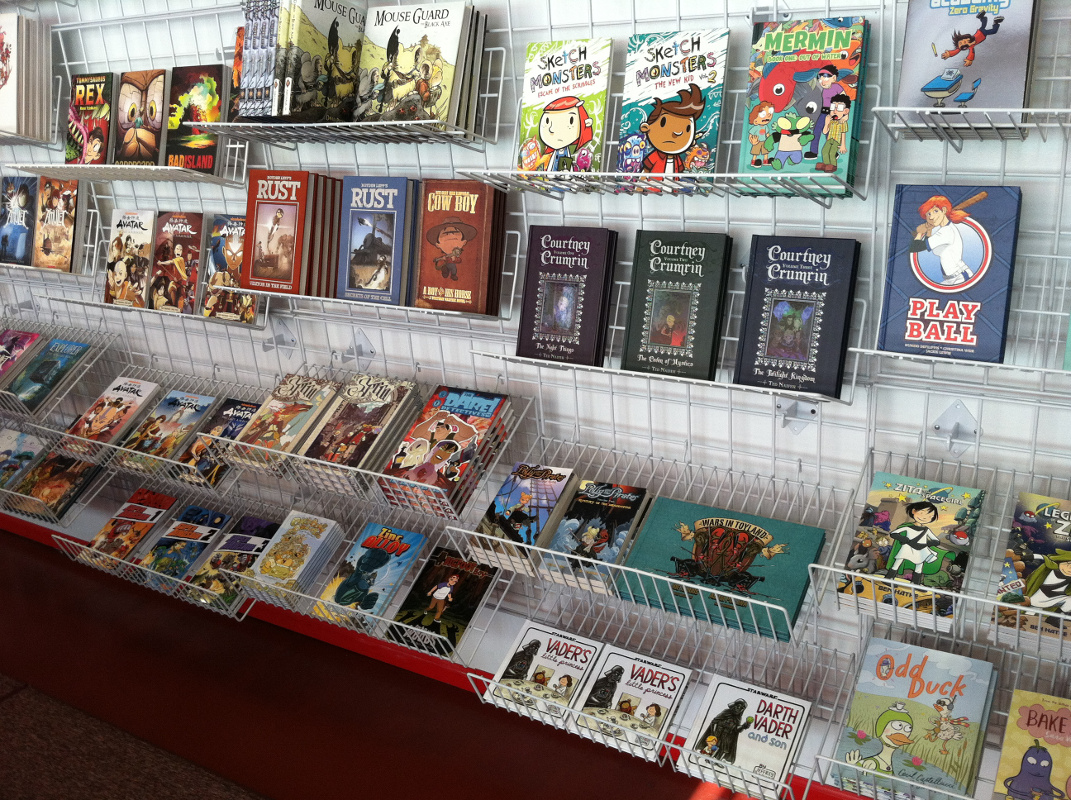 Of all of the bizarre issues that face the comic industry, one of the oddest by far is the wild disparity of how all-ages comics perform in the book market (meaning bookstores, Amazon, and bigger stores like Target) when compared to how they perform in the direct market (meaning comic retail stores). At bookstores, all-ages books like Raina Telgemeier’s “Smile” or Jeff Smith’s “Bone” sell millions of copies. At comic shops, you can see a graveyard of well-liked titles like Roger Langridge and Chris Samnee’s “Thor: The Mighty Avenger” and Art Baltazar and Franco’s “Superman Family Adventures” dotting the recent past. It’s a fascinating phenomenon, and one that many within the industry openly wonder about.

So why does this type of thing happen? Well, there a number of reasons according to the people I spoke with. David Saylor from Scholastic/Graphix shared his theory as to why, and it’s a good one: comic shops have a greater risk than bookstores when it comes to ordering, perpetually deflating their order numbers.

“Our books have done well in comic shops but it’s a tougher market because comic shops buy books non-returnable – generally through Diamond Distributors – so they must be very selective with their purchases and therefore tend to buy in smaller quantities than some bookstores,” he said.

When he says “non-returnable”, he means that for comic shops, all sales are final. If your local shop orders 100 copies of, say, DC’s “Tiny Titans”, that’s what they’re getting. And if they don’t sell them? That’s tough. They’re stuck with those copies, and they’ll likely have to try and burn them off in deep discount sales. That means every comic shop is effectively making a calculated wager with each order, as they want to buy enough copies to maximize their revenue, but not so many that they don’t get stuck with extras. It creates an industry built around perpetually hedging your bets, and it’s a big part of why unknown commodities and genres that are perceived as low sellers – categories which all-ages comics often fit into – often perform poorly. It’s a self-fulfilling prophecy of sorts.

It’s also really hard to blame comic shop owners for this, as they are like any business. They have to make money to survive, and all-ages comics are incredibly difficult to predict correctly on. 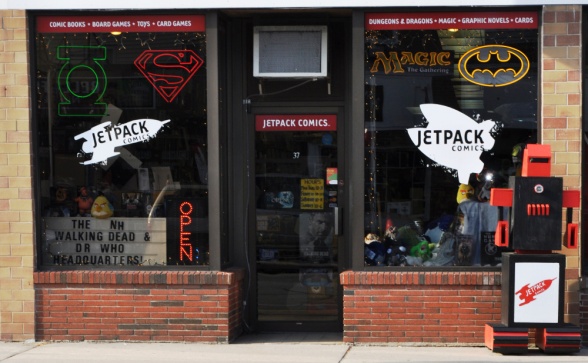 “As a retailer I know that these books have a different sales pattern than your regular floppies. There (are) no typical trackable sales for them. It’s all on the whim of the adult with money at the time of purchase,” shared Ralph DiBernardo of Jetpack Comics in Rochester, New Hampshire. “As a retailer I try to account for it but I can’t bank on it, so neither can a publisher. The sales have to pay the immediate bills. You can’t hope the same lack of pattern works every 6 months. You have to buy on actual sales.”

Conversely, bookstores can return overstock for most publishers, allowing them the ability to order big and not get burned in the process. This creates a situation where kids and parents can almost certainly find the all-ages book they’re looking for in a bookstore every time, but not necessarily in a comic shop. Like with anything, you shop where you can find what you’re looking for, creating an advantageous situation for bookstores.

A major part of the disparity likely comes from two mundane but important factors: the quantity of shops and the total shelf space available within them. Bookstores greatly outnumber comic shops within the United States. Specifically, there are roughly 23,000 bookstores in the country, and while I can’t find a number of comic shops to bump that up against, it’s pretty safe to say that number is far smaller. When it comes to shelf space, bookstores are typically far larger, and while they cover a wider collection of titles, the size difference and emphasis on all-ages material still allows for an often far greater selection of those titles.

Because of that, some comic shops are forced to make harder choices when it comes to stock, and sometimes that means passing on even the highest selling all-ages titles. Kazu Kibuishi, the creator of “Amulet”, noted that while some comic shops sell more copies of his book series than bookstores, “some comic shops don’t carry ‘Amulet’ at all.” That’s an enormous variance, and something you almost certainly wouldn’t see in bookstores that serve a general audience.

The comics that are produced for all-ages tend to favor bookstores as well, as Image’s Jennifer de Guzman shared as well. I asked her specifically about the disparity of performance of all-ages books in bookstores versus comic shops, and she shared this very subject was something that comes up a lot.

“Juliette Capra, who is a Valkyrie and works at Fantastic Comics here in Berkeley, said that it has to do with how parents shop for kids’ comics. If the parents aren’t comics readers themselves (or) if they read comics but not a lot of independent comics, they’re going to go for what’s familiar because they can be more sure that their kids will like it and that the content is appropriate,” she said. “And what’s familiar are licensed property comics. There are licensed comics that are a lot of fun, and I read them and get them for my kids myself. However, it’s too bad that if the same writers and artists working on those comics were to do their own creator-owned kids’ comics, they would sell a fraction of what the licensed titles do. It’s hard to even sustain a monthly kids’ comic in the direct market.”

Tying into that, one thing we’ll dig into later today is the question of format. Do collections and graphic novels (which bookstores favor) simply appeal to younger readers and the buying habits of their parents more than monthly floppies (which you find at comic shops)? It definitely appears so, but we’ll analyze that in greater detail soon.

As discussed in the State of the Union article from yesterday, the perception of comic shops themselves could be a major part of the disparity, as well.

“Sadly, I think the idea of comic shops have a stigma with a lot of the general public, not just parents,” Patrick Brower of Challengers Comics + Conversation in Chicago said. “The only thing we can do is keep our store clean, well lit, and smelling nice. Seriously, plug-in air fresheners make a world of difference and we never get tired of hearing about how good Challengers smells.” 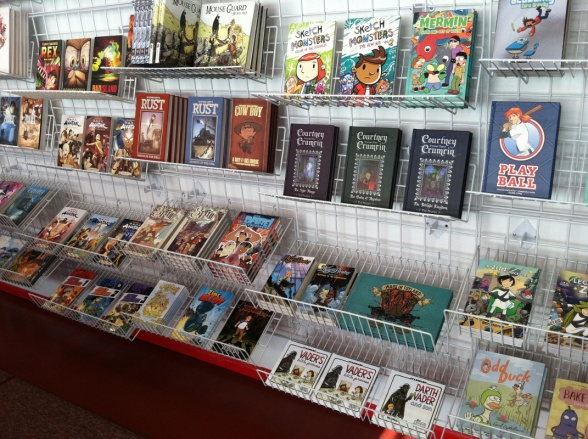 A look inside Sidekicks at Challengers Comics + Conversation

While both Challengers and Jetpack are well above average in how they try to serve families and kids, Gina Gagliano of First Second Books noted that many comic shops haven’t quite grasped how to reach children.

“We generally sell more of our books for kids to bookstores than to comics stores,” she said. “A lot of comic stores are still figuring out their ‘comics for kids’ sections, and it’s a category that bookstores are really succeeding at!”

Part of the enormous success the most popular all-ages comics see is tied to reach Scholastic/Graphix has with their titles. Jennifer de Guzman specifically noted that the popularity of books by Raina Telgemeier (like “Smile” and “Sisters”) are at least partially fueled by the power of Scholastic/Graphix, and how heavily they push those books in the book market.

“Girls are choosing to get these books at bookstores or mass market stores. Over the summer, I saw some girls buying them (Telgemeier’s books) at Target as part of the supplies they were taking to camp. And, you know, a lot of that is Scholastic’s power. As a publisher, they have mastered cultivating books kids will love and marketing to young readers and children’s book buyers. They can do this in a way no comics publisher has been able to — because that’s all Scholastic does,” she said. “Kids’ books are their business. They don’t really need the direct market, so they’re not putting their power behind promoting books to comics stores or telling their readers to go to comics stores to get their books.”

“What does it say about the comic market? The comic market responds to the companies that support and market to them,” she added. “That’s understandable. But at the same time, it also says that the market is still working on broadening its sphere to take in the larger culture and expand its customer base.”

That’s not to say that those books don’t do well in comic shops, still. All of the comic retailers I spoke to shared that books like Telgemeier and Kibuishi’s ones are amongst their top sellers for all-ages comics. But that may partially explain why Kibuishi noted some shops don’t order his titles at all.

The final piece of the puzzle, though, is the most obvious answer of all: parents already are interested in bookstores, but they aren’t necessarily interested in comic shops.

“They’re more likely to go into a store that has material of interest to them, as well as a mix of comic books and what they might be thinking of as ‘real’ or ‘reading’ books,” said Alex Schaffner of Brooklike Booksmith in Brookline, Massachusetts.

Schaffner is entirely right. To most parents, comic shops are foreign land, and a place that they’re not necessarily comfortable with. But bookstores? They’re a regular part of their life, and going to pick up the latest volume of a comic series their child loves also allows them to pick up the latest David Mitchell novel or “The Hunger Games” boxset. It’s the same idea behind why a place like Wal-Mart is so popular. Why go to three stores when you can just go to one? In everyone’s increasingly busy lives, going to one place for all the reading material they want increases efficiency, or at the very least gets parents access to what interests them already as well.

All of the above helps complete the puzzle as to why this disparity exists, and why it’s really not that odd at all when you think about it. For adult comic readers, comic shops are our place of business. It’s where we go on Wednesday for new comics. It’s where we go to pick up a new collection or graphic novel. But for parents and kids, bookstores are what they know and where they already go, and that’s invaluable in elevating the reach of all-ages comics through bookstores. They’re more abundant, more accessible and more all-ages friendly, and that’s a pretty simple formula for producing higher sales on such titles.

That’s not to say that comic shops can’t do more to draw in more parents and children. All you have to do is look at Free Comic Book Day to see the potential these shops have in drawing in kids. DiBernardo shared that on most days, five percent of his business is children or teens, but on Free Comic Book Day? 40%. The appeal of free is of course enormously attractive, but they wouldn’t come unless the kids wanted to be there.

The question is, how do you draw those same customers in through the rest of the year if you’re a comic shop owner? How do you make them regular customers? That I don’t have an answer to, nor do I know if that’s even possible. I do know this, though: it may be one of the most important questions for the continued success of the direct market.