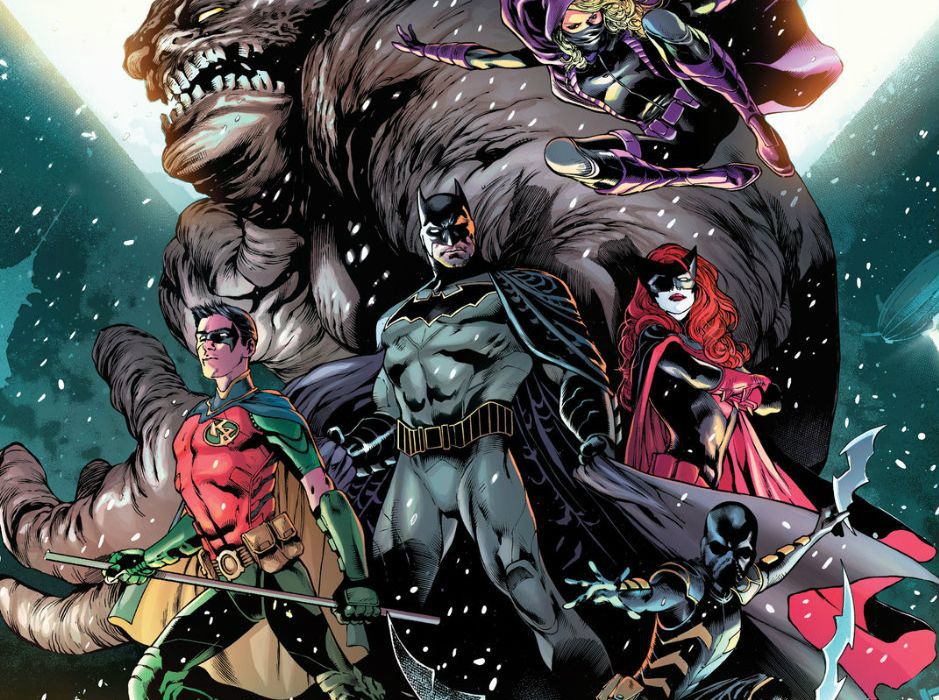 As we say farewell to James Tynion IV and co.’s “Detective Comics,” the last issue of which releases next week, I’m left wondering:

“Where does the idea of Batman go from here?”

I’m not wondering about Batman himself. Bruce will do what Bruce does. He’ll patrol Gotham, fight crime, and do other Batman things. (Also, I hear there might be a wedding coming up?) Nothing Tynion and his collaborators did altered the character’s core in any way but their work picked at that core and pushed it in a number of new directions. DC Rebirth’s “Detective Comics” was an examination of what the idea of Batman means to different people. Each story and each character was a filter through which Tynion showed us different aspects of what Batman is, what Batman could be, and what Batman should be.

There are a lot of systems you can build, using the Mantle of the Bat as a foundation. And it’s these systems, each inspired by a different facet of Batman, that Tynion’s protagonists and antagonists are concerned with. The idea of a highly-trained vigilante waging a one-man war on crime might seem commonplace to us as readers but, within an actual world where Batman exists, the idea is revolutionary, impactful, and inspiring. Batman’s very existence compels and sometimes forces others to respond with their own ideas, their own interpretations of what Batman is.

These interpretations are many and varied, each derived from different aspects of Batman and his mission. If you focus on Batman’s discipline, his capacity to do larger and larger acts of good, his tendency to expand his mission into the wider world, and his proclivity for recruiting others, you get Jacob Kane’s Colony. 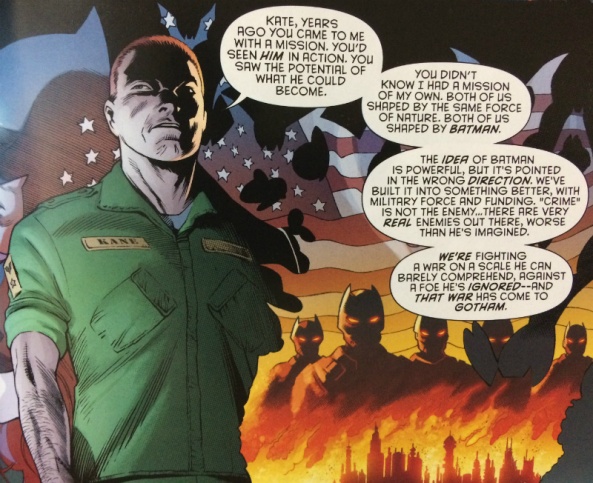 The Colony is “Batman as military organization,” and it feels like both a logical extension of the Batman idea and also anathema to it. There is something about Batman, about the Mantle of the Bat, that is personal to Bruce Wayne. To expand that idea into a faceless army, an army that lacks the motivation that created Batman and his family, opens the idea up to abuse and co-option from those who don’t understand it. Which is exactly what happens. 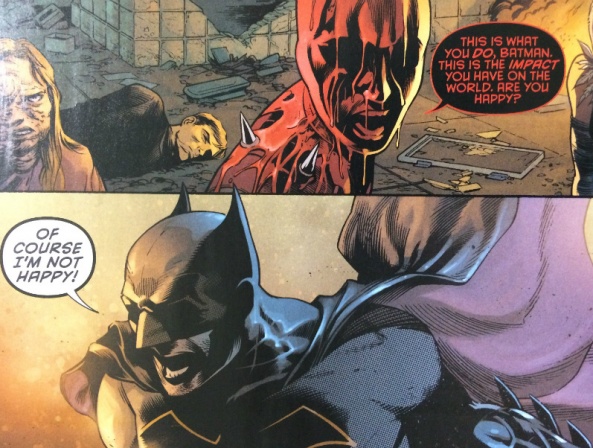 The Victim Syndicate’s greatest strength is that they are not wrong, and Batman knows this. It’s why he responds to them as he does. He offers them his assistance; he asks how he can help heal the wounds he created. The idea of Batman is not without its drawbacks. It is not without its downsides. The hope, in Bruce’s mind, is always that the positives outweigh the negatives. The Victim Syndicate disagrees with that assessment, as do others throughout this run, including Batman himself.

Because even those closest to Batman are not immune to his influence, both the positive and the negative aspects thereof. If you focus on Batman’s own most glaring, personal flaws, his all-consuming drive, his tendency to lose himself within his mission, his proclivity for shutting others out of his life to the point where he might not even understand the people he’s trying to “save,” you get the Tim Drake of the Future, the Batman of Tomorrow, the loneliest Dark Knight who ever lived. 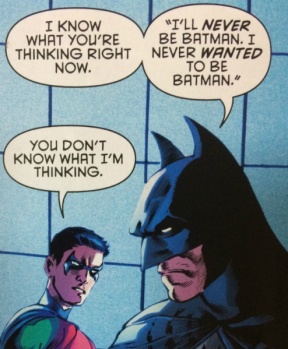 It’s incredibly damning that Tim, of all people, becomes this version of Batman. Tim Drake is the Bat-family’s optimist. He’s the one who believes that, one day, he’ll be able to retire his Robin costume and continue his life within the better world he helped create. To see him resigned to the idea of spending his life as Batman, to see him think of the idea not as an opportunity but as a burden, is to see the idea ultimately fail. To collapse under its own weight.

But that’s not the Tim Drake we get at the start of this run, and I don’t think it’s the Tim Drake we’ll end up with. Because the idea that Tynion’s run makes the most compelling argument for, the aspect of Batman that threads throughout each of these stories and ties them all together, isn’t the idea of Batman as an ever-expandable system or a set of negative consequences. It’s the idea of Batman as a found family. 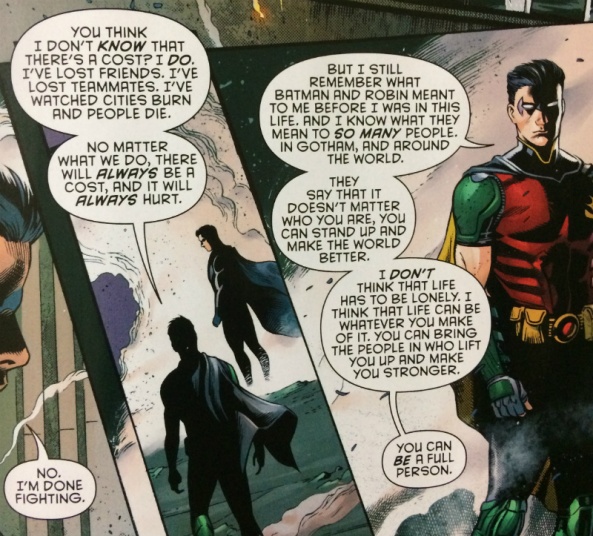 The Bat-family isn’t a new concept, but this expansion of it, led not by Batman himself but by Red Robin and Batwoman, is. This is Batman lowering his walls and bringing in others who you might not expect. We see not only Orphan and Spoiler return to the fold, but we see the addition of Batwing and Azrael (the latter of whom gets a version of Batman dumped inside his head). We see the family expand to include former baddies like Clayface. While this crew might seem motley, there’s a specific void in each of their lives that Batman recognizes and that he hopes the Mantle of the Bat can fill. Because that’s what the idea of Batman truly is: It’s a response to a void.

Outside of a world where crime doesn’t exist, a new family is the thing Batman wants most. It’s the thing he’s been consciously or unconsciously creating since the night Dick Grayson’s parents died. The mission is Batman’s own. He takes that on himself. But he’s willing to connect with and shepherd others when he recognizes something of himself in them, on an individual, case-by-case basis. That’s how found families are built. Not teams, not strike forces, not ever-expanding organizations. As I said above, the idea of Batman is personal. The expansion of that idea works only when undertaken by those who understand it, and, as the Tim Drake of Tomorrow shows, even then the idea threatens to consume or overwhelm a person’s best intentions. There are many ways the idea of Batman can go astray.

But there are just as many ways the idea of Batman can be done right. And when it’s harnessed correctly, the idea of Batman can be used to build something truly great. Something that expands on the best aspects of the Mantle of the Bat, while losing some of the baggage or mitigating some of the negative consequences that characters throughout “Detective Comics” have reacted to.

I’m very excited to see how Tynion concludes his run, and I’m excited to see how other writers and artists respond to it going forward. Tynion has challenged and expanded the idea of Batman on a number of levels. Those challenges and expansions will in turn provoke their own new ideas and stories, another part of the ever-expanding Batman legacy. Because there is no limit to what you can build from Batman.