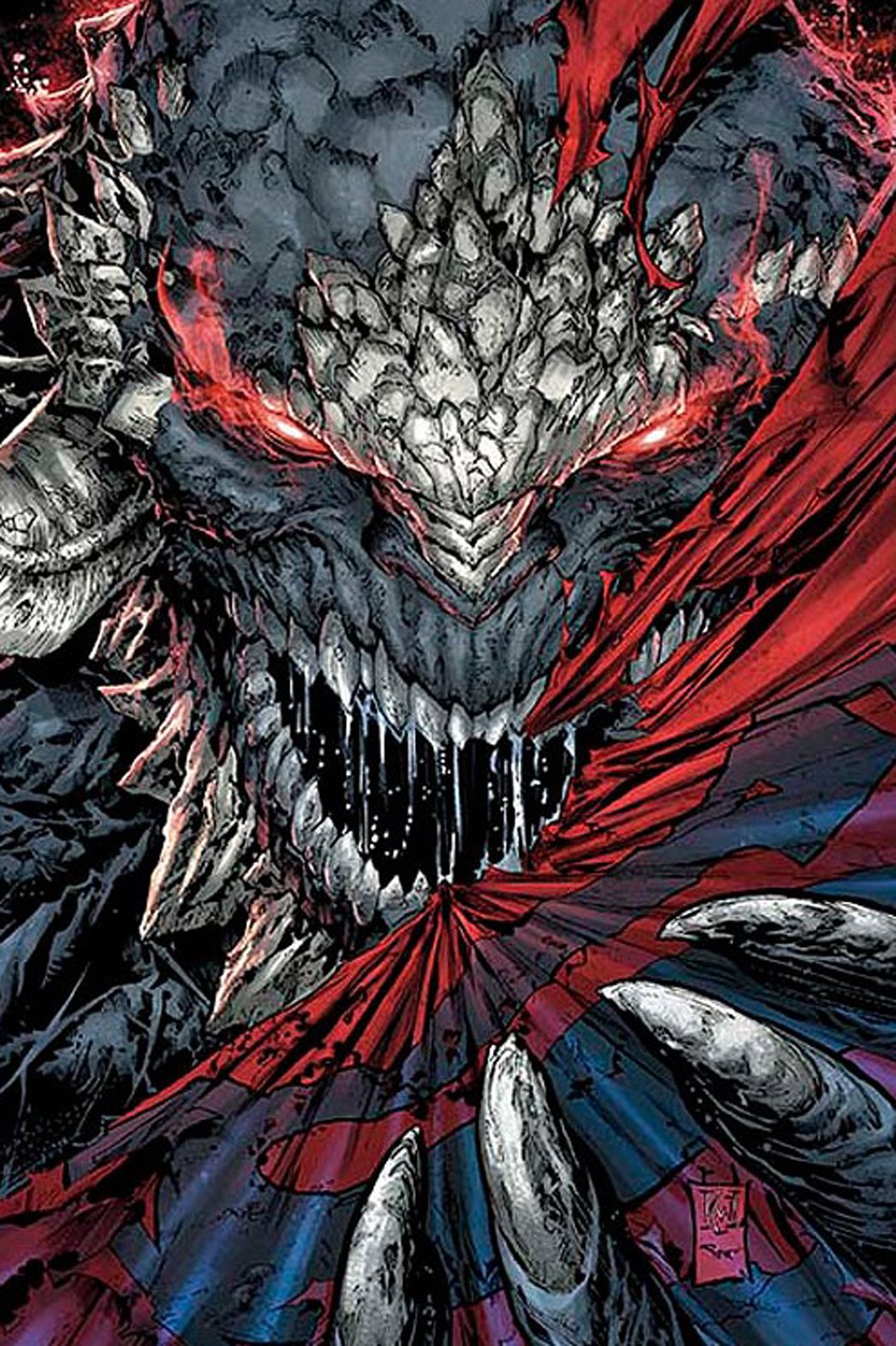 As a note, unavoidably, spoilers are discussed for the entire arc.

There are a lot of things long time DC fans have begrudged since the start of the New 52, and most likely you’ve heard them all before. For me, personally, there have been very few issues as egregious as the degradation of the superhero community in the comics. From a universe built on community, the New 52 made every hero a loner, and every relationship terse and distant. Even the big, universe-altering events (of which there have been very few) felt unnecessarily hostile. “Trinity War” pitted heroes against one another, whereas “Forever Evil” pulled the heroes off the table altogether.

But then came “Superman: Doomed.” On the surface, this was as outdated an idea and as problematic an event as DC could muster. One of the keys when selling the New 52 was the idea that DC wouldn’t be repeating stories that had already been told. That, of course, has been false, and this appeared to be yet another case of retelling a story for no good reason. Add to that the fact that Doomsday, as both a character and a plot point, hasn’t aged particularly well, I had written off the series before it even started — especially as the original writing staff for the event featured Scott Lobdell, the architect of much of the absolute worst the New 52 had to offer.

But once the event got underway, and especially after the rocky first month, it became clear that this wasn’t “Death of Superman” redux; Lobdell was only writer or co-writer of two issues, and the series would involve far more than just Superman and Doomsday. This was a far larger event than anticipated, and it did a number of really important things when planning a Superman event. 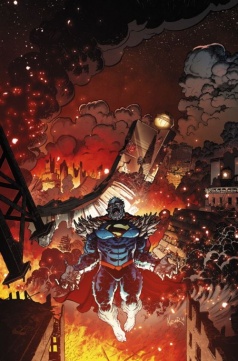 Superdoom on the cover to Action Comics #34

Before anything else, it gave Superman a couple of formidable opponents. The Doomsday virus (which infected Superman and turned him into the unfortunately named Superdoom) and later Brainiac both posed real threats to Clark. Brainiac was ultimately the big bad of the series, and the particular take on the character allowed the creators to do some really interesting things.

The creators in question – the two co-writers of the bulk of the series, Greg Pak and Charles Soule – let Brainiac’s involvement tie-in a huge supporting cast, but there are six people in particular that become essential to the series: Batman, Wonder Woman, Steel, Martian Manhunter, Lois Lane, and Lana Lang. Each character is perfect, and represents a different side of Superman. You see, up until about a year ago, the New 52 Superman had been relatively one dimensional. Here, however, you see many aspects of the character come alive, as triggered by his supporting cast.

Of special importance are the three women here, the three most important women in Clark’s life. Lana, with her ties to Smallville, represents the innocence and, as corny as this sounds, values that make Superman who he is. Lois represents the scope of his influence and reach, which manifests itself through her corruption by Brainiac – she is able to impact everyone on Earth, something Superman does every single day. And Wonder Woman, Superman’s main squeeze, shows his power and his determination, as she both stands up to him and allows him to put himself in more danger than necessary.

The other three characters I mention all, more or less, pair up with one of the women. Lois and Manhunter act as partners in telepathy, Batman and Wonder Woman try to get backup from the heroes of Earth (as well as protect Earth from Superdoom), and Lana and Steel work on the science behind Brainiac’s invasion. Just the simple fact of having all of these characters working together bucks the trend of the New 52, but when they are used so effectively and when there is true camaraderie, trust, and care shown at each turn, it is shocking just how different this feels.

One of the clear downfall of the series is the art, which never dips below “good,” but is handled by so many different people that it is hard to get too excited about the series as a whole. To give an example, “Superman: Doomed” #2 has nine credited artists. Some are easy to identify – Aaron Kuder was responsible for the final page (more on that in a bit), Syzmon Kudranski handled the “inside the mind” Clark/Brainiac scenes, but much of the art was a little too-DC house style to really identify who is doing what. The artists all seemed to enjoy drawing Superman in this new context, highlighting the corruption of his iconic look with the bones and size of Doomsday. The problems, artistically, were never with Superman himself, but rather the supporting cast, especially the female members of said cast. Many times it was a good thing that Lois was green, because she was drawn in a way that didn’t at all scream Lois Lane.

Most of the discussion of this crossover, however, focused on the final page. 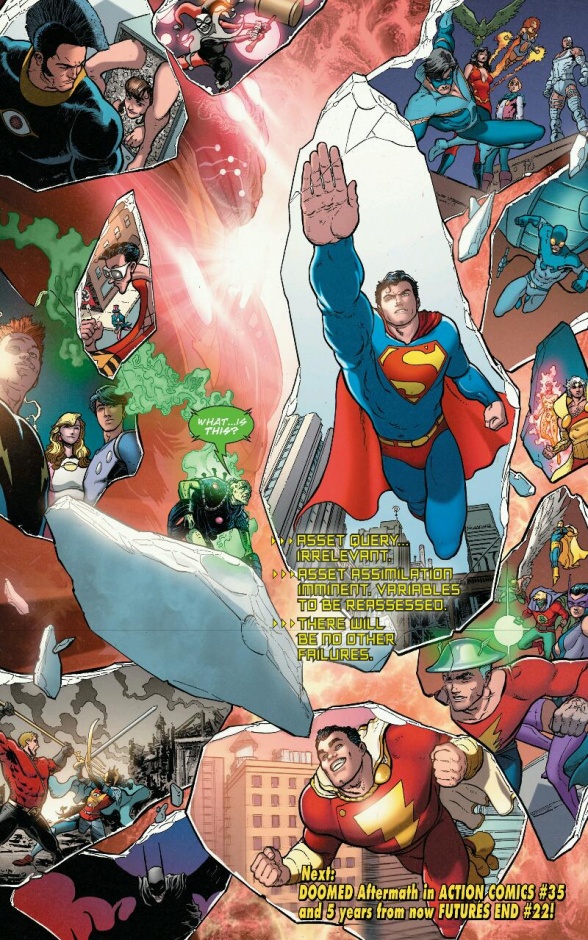 Here, we see Brainiac pushed through a black hole by Superman, observing some sort of pre-New 52 prism of DC Universe events/planets of the Multiverse. Before the final issue came out, I was telling a few people how this was the least-New 52 feeling event DC has released thus far, and so it was somewhat of a validation of those thoughts to see the red trunks on Superman and the Wolfman/Perez Teen Titans in a new book published in 2014. This lets us know that, somewhere in the DC Universe, these characters still exist, or once existed, or however we’re going to parse this.

The fact that the final chapter of this story came out a month later than solicited suddenly seems purposeful and planned, as opposed to chalked up to lateness – it was timed perfectly with Booster Gold’s time/universe traveling from his “Futures End” issue and after “The Multiversity” has started its hopping of worlds. This moment feels like the only time since the New 52 started that all things are possible, and that instantly makes for better stories line-wide. This also gives old nerds like me hope that some of the more interesting concepts/characters that have gone the way of the Dodo are still out there, somewhere, ready to be properly utilized.

Whether this actually leads to changes in storytelling or expands the characters used remains to be seen – but even if the last page somehow is rendered moot, the preceding issues all showed that you don’t really need to undo the New 52 to have a lived-in, vibrant shared universe. It also reestablished Superman as the moral and focal center of the DCU. Heroes come when he asks; heroes come when he needs help. He is the gold standard, and he acts like it – none of this chickenshit early New 52 Superman – he represents the best DC has to offer, as he did for 70 years pre-“Flashpoint”. It is a shame it took 3 years for that character to show his face again.