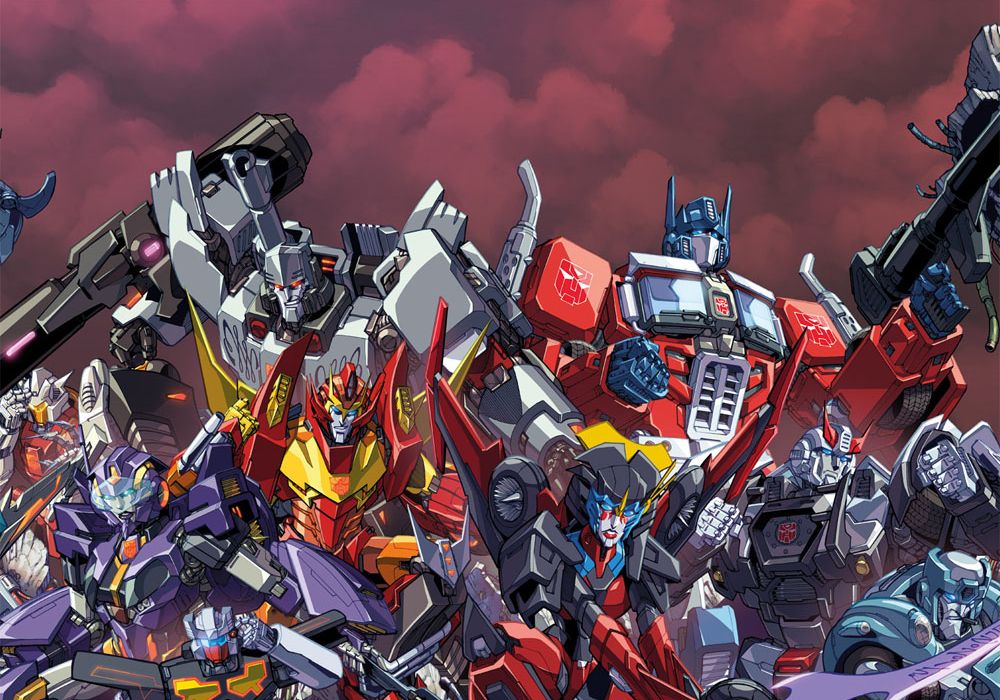 2018 is shaping up to be a year of great change for comic book readers, with Marvel’s Fresh Start bidding us farewell to great runs like Dan Slott’s Spider-Man or Gerry Duggan’s Deadpool, and Scott Snyder and Brian Michael Bendis’s apparent takeover of the DC Universe. Yet none of these events are as earthshaking as the news that this summer’s “Unicron” miniseries will bring about the end of IDW’s Transformers/Hasbro Universe. 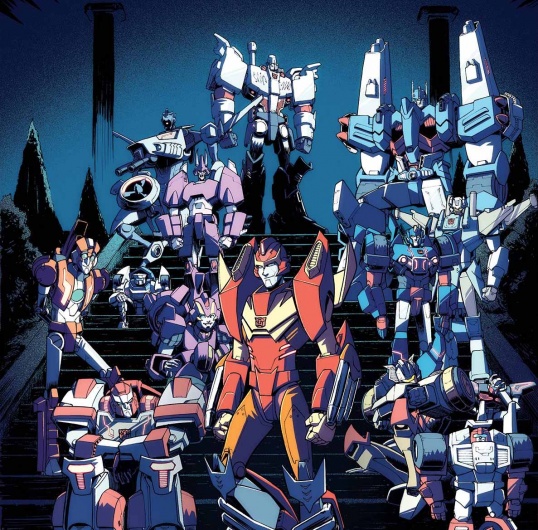 Some of MTMTE's most prominent cast members on a cover for #50. Art by Nick Roche.

I’ve been a huge fan of IDW’s Transformers since its inception, and in particular the comics written by James Roberts like “More Than Meets the Eye” (which began in 2012 and was relaunched in 2016 under the title of “Lost Light”). Roberts’ run, and that of John Barber on “Robots in Disguise” and “Optimus Prime,” have kept my love of the Transformers alive as the embarrassment of the increasingly worse films soured most everyone else on these beautiful characters.

In telling the story of the crew of the Lost Light and their search for the ancient Knights of Cybertron, Roberts and his artistic collaborators like Nick Roche, Alex Milne and Jack Lawrence, have fleshed out Cybertronian society, biology, and religion to a level of sophistication not seen since the Marvel UK Transformers comics of the ’80s. More importantly than all that, MTMTE was a deeply funny and often moving comic. I remember reading the end of MTMTE #16, ‘The Gloaming,’ which dealt with the aftermath of Rewind sacrificing himself, and how touching the message he left for Chromedome was; similarly I found their silent, and slightly awkward, reunion in #33, to be a sublimely uplifting piece of visual storytelling. 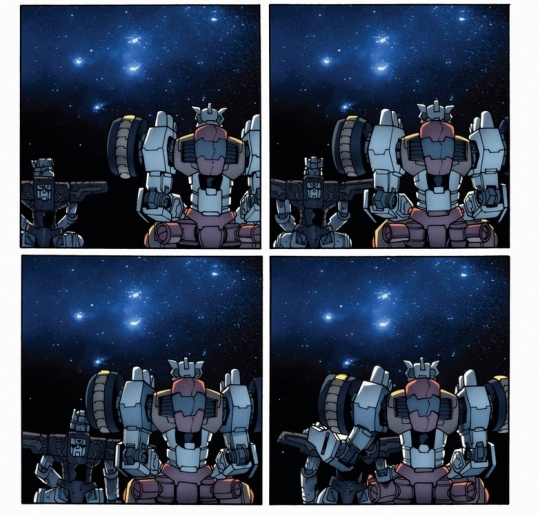 Chromedome and Rewind reunited in MTMTE #33. Art by Alex Milne.

Those two moving moments, illuminating the bond that can exist between two male characters, still paled in comparison to the moment that came in #21, ‘Remain in Light,’ when it seemed Cyclonus had euthanized the dying Tailgate. Turned out it was misdirection, which came as a huge relief, but in that moment I felt a profound sense of loss. It wasn’t the only time MTMTE almost moved me to tears; in #55, the redeemed Megatron realizes he will have to kill again to protect his friends, and I truly felt his anguish and pain as he unleashed his antimatter weapon on his enemies. Here a Transformers comic was reminding me of the cost of violence, no matter how good your intentions are, and I could not believe how shaken I was. 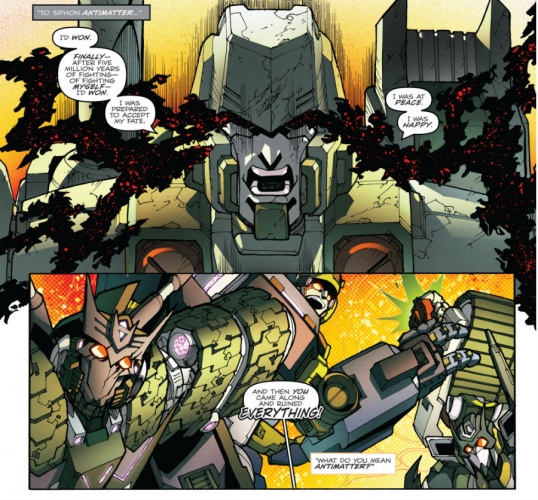 Megatron cries antimatter in MTMTE #55. Art by Milne and Perez.

The end of such great comic books are ultimately another painful reminder of the passing of time. However, after dwelling on it, I realized that IDW made the right decision. Firstly, it would be impossible to top Unicron for the next big threat, he is literally their biggest threat. Secondly, we’ve seen what happens when someone has had to follow up someone’s work on this universe and seen it end badly. 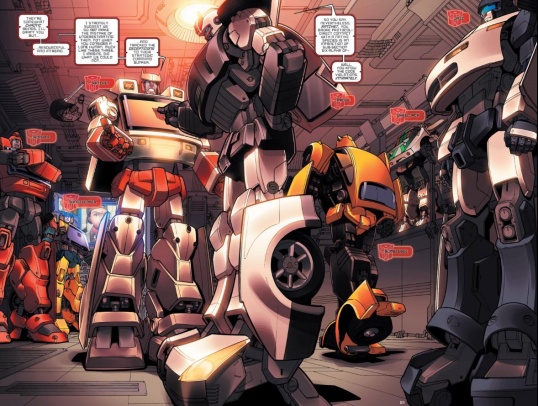 The original Autobot cast in Infiltration #3. Art by E.J. Su.

IDW’s universe began from the death of another, when Dreamwave Productions‘ implosion in 2004 left their version of the Transformers timeline permanently unfinished. IDW picked up the license, and began their take in October 2005 with Simon Furman and E.J. Su’s “The Transformers: Infiltration” #0. It was an exciting time, with Furman getting to tell the Transformers’ story anew, rather than piggybacking on someone else’s work like he did at Marvel and Dreamwave.

His run, which consisted of the miniseries “Infiltration,” “Stormbringer,” “Escalation,” “Devastation,” “Revelation” and the “Spotlight” series of one-shots, was an incredibly fresh, modern reboot, that made Transformers feel bigger than it had ever been, establishing Cybertron had been destroyed and that the Autobot-Decepticon war was now being waged across the universe, with both factions sending infiltration teams to every planet.

It wasn’t perfect, as Furman’s hang up about Transformers having genders resulted in him crafting a backstory for Arcee where her feminine appearance was the result of an experiment by Jhiaxus that left her violated and traumatized, which was extremely offensive in retrospect (nevermind that it closed the door on other female Transformers joining the cast for a long time). It was deeply ironic given E.J. Su depicted Bumblebee and Sunstreaker with female holomatter driver avatars, implying some gender fluidity in the species.

Still, Furman seeded this expansive take with several mysteries, like the powerful Ore-13 that drew Starscream to Earth, and made other striking changes to the mythos, such as the implication that Optimus Prime didn’t possess the Matrix of Leadership, that it had been taken by his predecessor Nova into a Dead Universe, and changed into something darker. It was therefore deeply upsetting when the endgame he was building to was truncated and pushed aside in 2008 for Shane McCarthy’s “All Hail Megatron.” 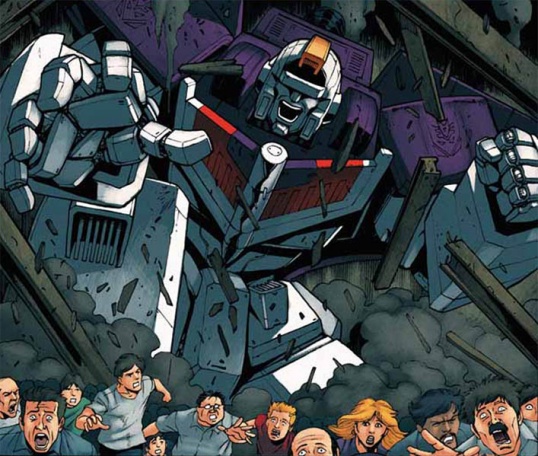 Astrotrain attacks in All Hail Megatron #3. Art by Guido Guidi.

A 12-issue series where Megatron conquers Earth, “All Hail Megatron” was a juvenile attempt at reinventing the ’80s Transformers for an older audience in the wake of the live-action movie, with issue after issue depicting the Decepticons massacring humans while the stranded and leaderless Autobots bickered and fought each other on Cybertron. Furman had to resolve the Dead Universe storyline in the “Revelation” mini, which only consisted of four issues rather than six. He was ultimately given more time to wrap up his Earthbound storylines in the six-issue series “Maximum Dinobots,” penciled by Nick Roche.

It was difficult to see “All Hail Megatron” as a continuation of Furman’s run, especially as McCarthy ignored the foreshadowing surroundng the Matrix, depicting it as being ripped out of Optimus’s chest by Megatron. As the series continued, and IDW added four “Coda” issues for other writers to reconcile the two eras, things actually became worse, especially when the Autobot Sunstreaker left his human friend Hunter O’Nion for dead, which also felt like a betrayal of the investment (and plans) Furman had built up for the duo. I would’ve honestly preferred if “All Hail Megatron” had cut ties completely, so even if it had been integrated later on, Hunter wouldn’t have been killed off. 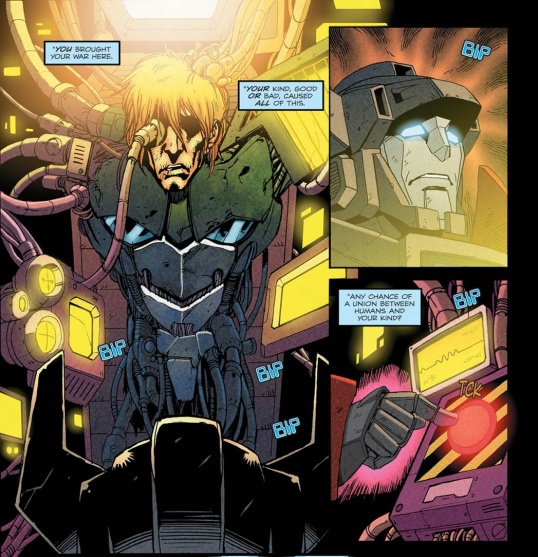 I always thought, with IDW not being run by people like those who ran Dreamwave into the ground, that there would never be a need to reboot their take on Transformers, that it could run forever like the Marvel and DC Universes (the latter has, admittedly, been rebooted countless times). Yet IDW took a bold step with actually ending the war in 2011’s ‘Chaos,’ and it has lasted six amazing years. They could’ve rebooted their comics afterwards, and that’s allegedly what Hasbro pitched, suggesting their comics take place in the same continuity as the War for Cybertron games and the Prime cartoon, but instead they did something fresh and unique, exploring what Transformers at peace (though not necessarily quiet) looks like. 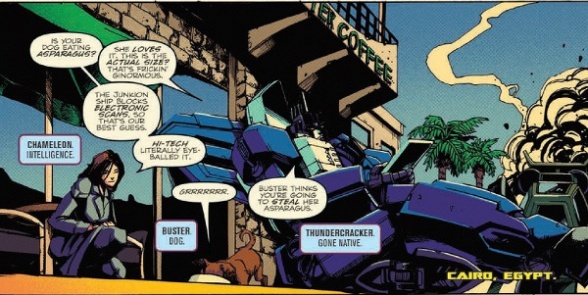 If a writer decided to tell stories with an evil Megatron or Soundwave again, then they can do so without undermining the incredible journeys Roberts and Barber have these characters on. As bittersweet as IDW closing the book on this universe may be, it’s already intriguing to consider a continuity where female Transformers aren’t just a 13th of the population, or where the G.I. Joes are in play from the beginning, without having to take into account what happened in Chuck Dixon, Mike Costa or anyone else’s comics.

I will miss the unique relationships between characters like Cyclonus and Tailgate, or Barber’s motley group of “Revolutionaries,” as well as the redeemed takes on Megatron, Soundwave and Thundercracker – especially Thundercracker, who under Barber has become a hilariously appalling screenwriter with a pet dog – but I know they’ll still be out there somewhere in the multiverse: in fact, “Lost Light” made it explicit with its first arc, where Megatron is given the chance to begin his Decepticon revolution anew, but correctly this time.

If the 15-year old version of me were receiving this news, he’d be excited to learn if Barber, Roberts and their collaborators were rebuilding Transformers from the ground up, just as he was excited by the prospect of Furman creating his own take on the franchise. This essay is named after one Furmanism, but to borrow another, it never really ends, does it? Yet with this latest big bold step, IDW’s Transformers will receive a true ending, that rarest of conclusions for comic book heroes, no matter what the outcome of their climactic battle with Unicron will be. Now, IDW, more than ever: light our darkest hour.