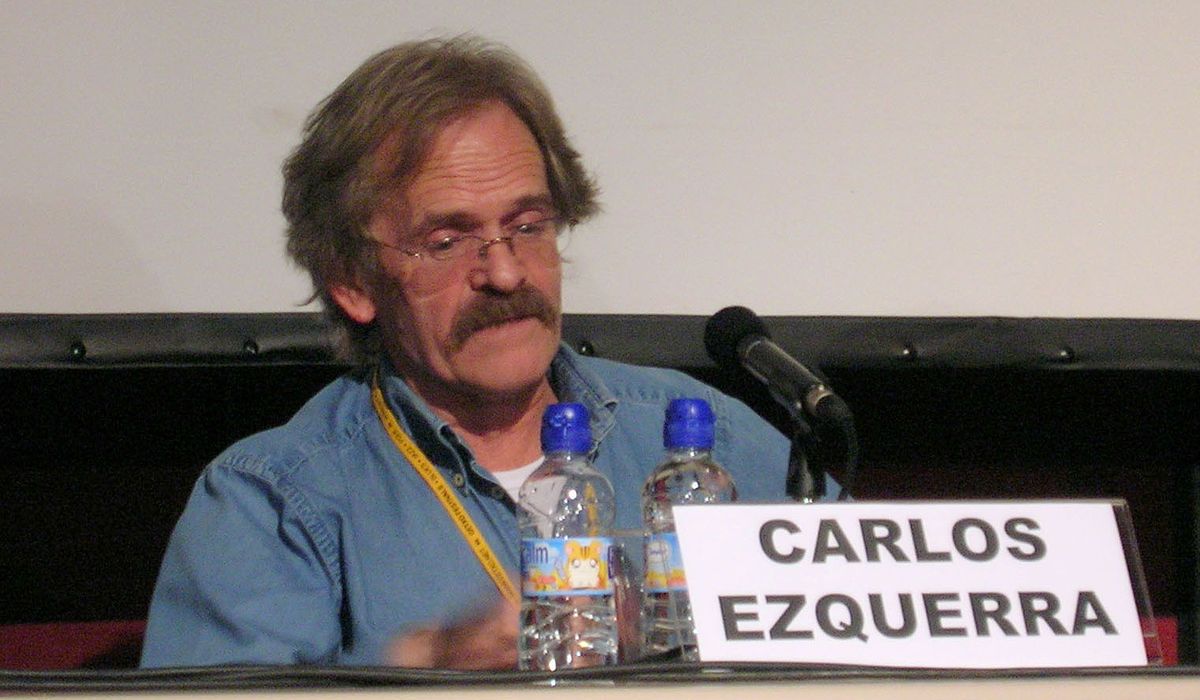 The thing about Carlos Ezquerra’s designs is that they shouldn’t work. Just look at Judge Dredd, with the dozens of little details that compose his uniform, all the bits and pieces of armor, the ornate eagle on shoulder, the badge and the chain, the little X on the visor…. And even more counterintuitively is that fact that this uniform is in no way unique; that is how all the judges dress, and there are many of them, sometimes dozens per page. It should’ve been a mess of a comics.

Yet here we are, over forty years later, in the world Carlos Ezquerra made: Judge Dredd is still published, still one of the biggest icons of British comics; lesser, but only in terms of overall sales, is another Ezquerra creation, Strontium Dog, which saw a new (and possibly final) serial in 2018’s “The Son.” They shouldn’t work, but they do. Because rules of design do not apply to geniuses.

And that is what he was. It wasn’t a word that I thought of often when he was alive. Because geniuses were dour and tormented and took their time, aching and sweating over every page until it was perfect. Carlos Ezquerra drew the entirety of “The Apocalypse War,” over 200 pages, in weekly installments of seven; in such conditions it could be forgiven if he faltered – if a page felt rushed, if a scene was cluttered, if compositions suffered once in a while. But nope, the story just keeps on topping itself, from the first unassuming moments of “Block Mania” all the way to the profound and shocking moment that every 2000AD / Judge Dredd fan knows by heart: “half my city is burnt to ash by East-Meg missiles – and you’re begging me for mercy? Request denied!”

There’s true power in these images, some of the greatest ever committed to the printed page: just the panel break before the “request denied” part is amazing, it features continuation of the movement from the previous panel while putting a sharp focus on the deciding moment (the finger pushing down on the button, killing hundreds of millions); followed by the threatening images of the missiles leaving the silo – reminding us that that Dredd might be the protagonist, but what’s he’s doing here is far from absolute good, that this is a moment that is as much about horror as it is about triumph. In “Judge Dredd” and “Strontium Dog” he was often called upon for tough balancing acts – mixing high drama with farce, tension with levity, character moments with unyielding action. He never fell off that tightrope.

His work had unassuming air to it; always serving the stories and characters first, never just impressive for its own sake. He was fast, fast and reliable. Former 2000AD editor Andy Diggle recalled once in an interview: “Carlos was having a new house built when he was trying to draw ‘Helter Skelter’ but it was literally falling apart around his ears.” You wouldn’t know it for looking at the story, not Ezquerra’s best but in no way lowering of the standards. Looking at his last two stories for 2000AD (please someone reprint “Law of the Cursed Earth”) I find it hard to believe that he was seventy, that he was fighting with cancer. I often took Ezquerra for granted, and I believe I was not the only one, because he was always good – our expectations could not be suppressed because they were already sky high. Have you ever seen a bad Carlos Ezquerra page? Please note it right next to the unicorn and bigfoot.

Unlike many other geniuses Ezquerra also refused to let time pass him by – fifty years of making comics and he was never out of style. Older artists often suffer as fashions change around them, as their style slips out the zeitgeist and they are forgotten (only to be rediscovered years and decades later); not so with Carlos Ezqerra who adapted to changing times without ever losing his essential self. Try looking at a random Ezqerra page from the 1970’s, then one from the 1980’s, 1990’s and so forth. You can tell, immediately, that they are his (these jagged line, the farrowed faces, that particular melodramatic way he drew a person getting shot), but they never feel old or out of their time. It’s hard to believe, looking that “Necropolis,” so unlike what came before it, came from a man already in the second phase of his career, in that he was not unlike Jack Kirby – who kept reaching new heights as others settled.

He was more, of course. More than “Judge Dredd” and “Strontium Dog,” more even than 2000AD (though no one else gave him the same amount of recognition). No other artist could draw a western desert (or just a western) quite like Carlos – to reach the very essence of a hard environment and the way it chips away at people. See his figures emerging slowly from the nothing and see the west as it appeared in the dreams of John Ford, Howard Hawks, Sergio Leone; something both immediately recognizable and yet beyond place and time.

His history in British comics is slowly being brought to light, reprinted for a new audience for the first time in forever. His American works, especially his collaborations with Garth Ennis, cannot be ignored: “Condors” remains one of the finest war stories I’ve ever read, it has hour men sitting a hole talking and yet feels more alive and on-the-move than many stories that are filled with explosions and firefights. He could make the page sing.