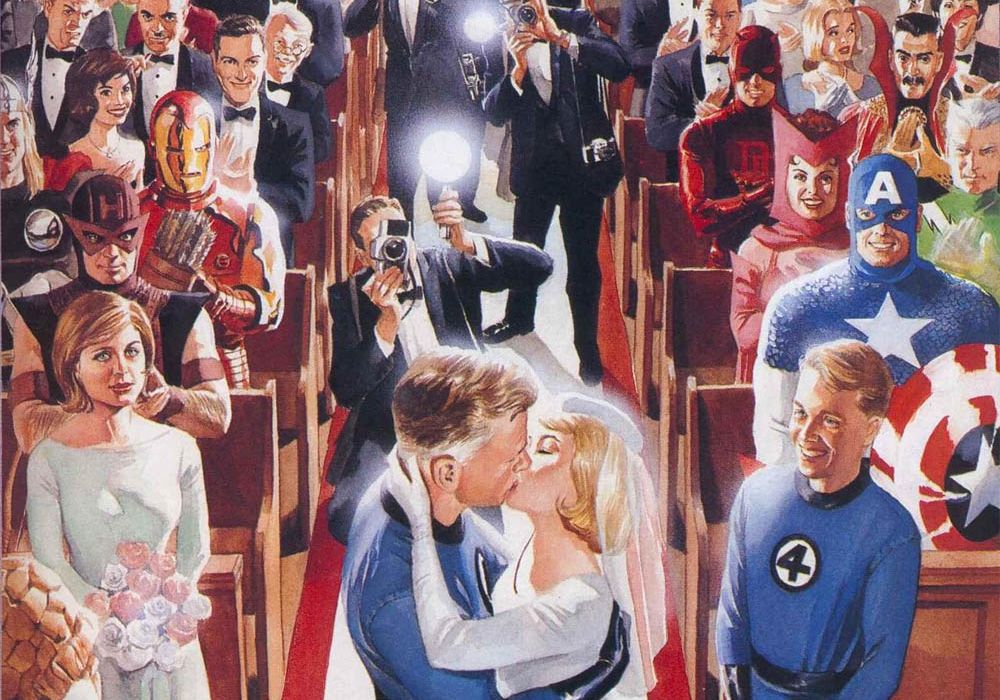 Last week, The Walt Disney Company unveiled its upcoming streaming service Disney+, which will become available in North America from November 12, 2019, at the cost of $6.99 a month. Marvel Studios will be dipping their toes into TV for the first time there, producing the service’s original scripted Marvel content instead of Marvel TV and ABC. So far, confirmed planned series include WandaVision, Falcon & Winter Soldier, Loki, and the animated What If?

All of these series will take place in the Marvel Cinematic Universe (or in What If?‘s case, diverge from it), giving extra exposure to characters who aren’t getting their own movies. Based on previous comments by Kevin Feige, we can expect more spin-offs, like an Okoye series. Understandably, so far, so safe – but eventually, Marvel must really push using the platform by adapting comics that would not fit into the MCU at all. Here are seven suggestions:

What’s it about? Kurt Busiek and Alex Ross’s seminal 1994 series depicted the events of the Marvel Universe from the 1940s to the ’60s through the eyes of photographer Phil Sheldon. In four glorious issues, Busiek and Ross reexamined major events like the dawn of the superheroes during World War II, the arrival of scary mutants at the start of the ’60s, the coming of Galactus, and the death of Gwen Stacy, and the impact these had on Sheldon and his family.

Why should it be on Disney+? “Marvels” and its 2009 sequel “Eye of the Camera” (co-written by Roger Stern with art by Jay Anacleto) would have been impossible to do in the MCU, given the wider time gap between World War II and the present day heroes like Iron Man. But on Disney+, it’d be much easier to sell this as a retro spin on the beloved heroes set in the original comics’ timeline, not that of the films.

It could be a crossover hit with fans of: Mad Men, Timeless, Manhattan, The Kennedys, The Marvelous Mrs. Maisel, The Shape of Water, Watchmen. 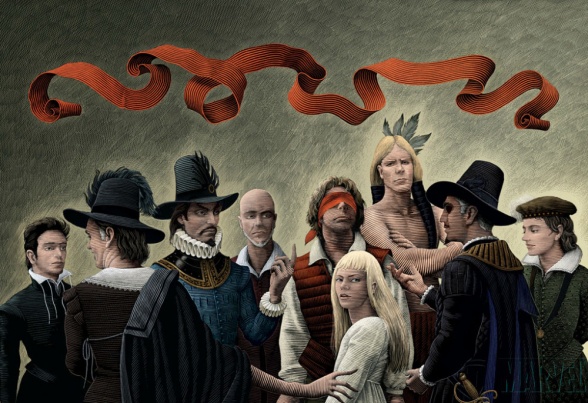 Why should it be on Disney+? “1602” always seemed like an unlikely choice for an adaptation, since it wouldn’t contribute to the MCU’s narrative – until now. It would be even easier to sell this as a side-narrative on Disney+, as viewers won’t feel like they’re paying to watch something irrelevant to the MCU. There are plenty of reasons to adapt “1602” on its own merits though: its premise inherently provides endless pleasant surprises for the audience, and its setting is incredibly atmospheric.

It could be a crossover hit with fans of: Pirates of the Caribbean, The Devil’s Mistress, Gunpowder, Black Sails, Jamestown. 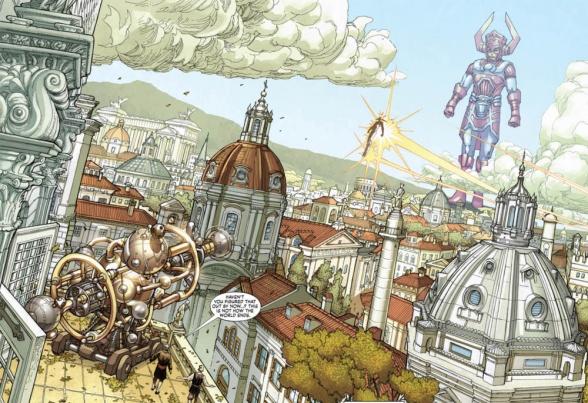 What’s it about? Jonathan Hickman and Dustin Weaver’s wildly imaginative 2010 series uncovered the history of the Brotherhood of the Shield, the ancient predecessor of the spy agency, whose members – including Leonardo da Vinci, Galileo Galilei, and Sir Isaac Newton – protected the world for centuries before the likes of Tony Stark, Reed Richards et al.

Why should it be on Disney+? Getting audiences to suspend their disbelief about a talking raccoon and tree is one thing, it’s much bigger to ask them to accept the Marvel Universe’s versions of Da Vinci and Newton are time-traveling immortals waging a battle over free will vs. predeterminism – which is the kind of bold, bizarre storytelling that’s more widely found on TV instead of movies nowadays anyway.

It could be a crossover hit with fans of: Assassin’s Creed, Da Vinci’s Demons, Star Trek Discovery, American Gods, Game of Thrones, Pose. 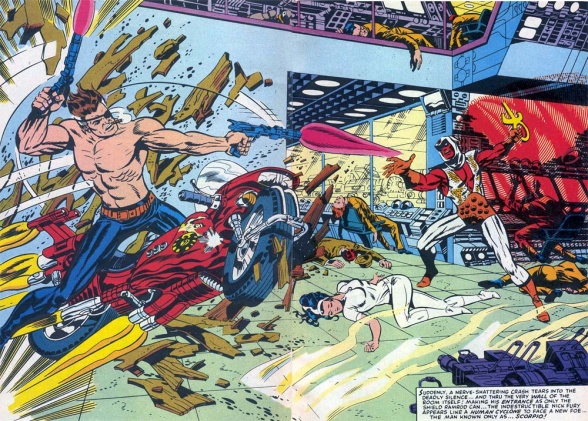 Why should it be on Disney+? Nick Fury’s MCU backstory is so different from his comics counterpart(s) that it would be impossible to do a sexy Bond-inspired movie with that version: Samuel L. Jackson’s Fury didn’t even know Baron Strucker. (Also, some might become confused and angry about Nick Fury’s dad getting a movie instead of his son.)

It could be a crossover hit with fans of: James Bond, Mission: Impossible, The Man from U.N.C.L.E., Alias, Archer. 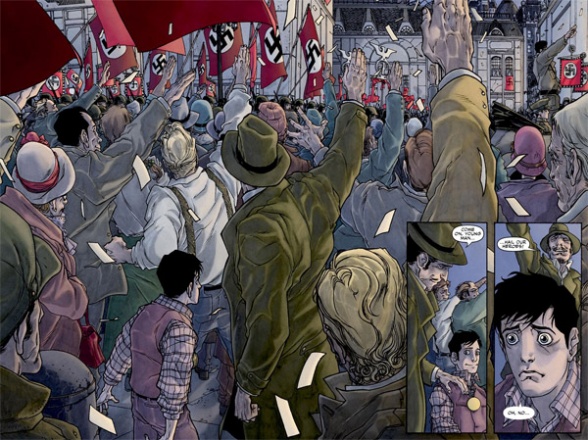 What’s it about? Greg Pak and Carmine Di Giandomenico’s moving 2008 series followed young Max Eisenhardt – the boy who became the X-Men’s nemesis – as he struggled to survive the Nazi monstrosity from 1935 to 1948.

Why should it be on Disney+? This harrowing story may have to be released on Hulu instead, but there are PG-13 Holocaust films, and Disney and Marvel ought to help teach their young fans about these terrible events – especially if, for whatever reason, the MCU’s Magneto isn’t a Holocaust survivor.

It could be a crossover hit with fans of: Roots, Band of Brothers, The Pacific, Generation War, The Boy in the Striped Pyjamas, The Book Thief. 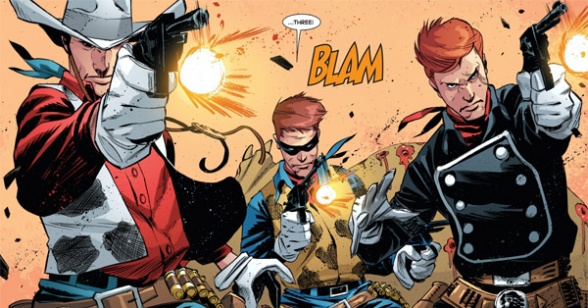 What’s it about? Marvel has a lot of diverse Old West heroes, from gunslingers like the Rawhide Kid, the Gunhawks, and Arizona Annie, to the costumed Phantom Rider, and Native Americans like Apache Kid and Red Wolf: get them together and it could be a fun ride.

Why should it be on Disney+? Westerns are fun, but not exactly blockbusters these days (unless you’re Quentin Tarantino). It’d a good opportunity for the service to have an ongoing Western series, and avoid complaints about an “irrelevant” film taking place during the 19th century.

It could be a crossover hit with fans of: Red Dead Redemption, Westworld, Hell on Wheels, Deadwood, Firefly, The Mask of Zorro.

What’s it about? Doreen Green, a young Canadian lady with a big bushy tail and the power to talk to squirrels, which, combined with a pacifist streak, has rendered her Earth’s most powerful superhero. Created by Will Murray and Steve Ditko in 1991, she currently stars in the Eisner Award-winning “Unbeatable Squirrel Girl,” written by Ryan North since 2015.

Why should it be on Disney+? We should note Marvel TV have already tried to introduce Squirrel Girl into the MCU, casting Milana Vayntrub in the role on the Freeform pilot New Warriors, which the network passed on. (Vayntrub currently voices Doreen in the animated Marvel Rising specials.) So why not a theatrical film? “Unbeatable” shows Squirrel Girl works best in her own bubble: she doesn’t cross over into the MCU, it comes over to her. Having her star on Disney+ would relieve the character of the expectation of having to guest star in another film series.

It could be a crossover hit with fans of: New Girl, Crazy Ex-Girlfriend, Unbreakable Kimmy Schmidt, Broad City, The Good Place.

Agree, disagree? Want to make the case for an adaptation of “Marvel Apes” or “Ruins,” or a series starring Gilgamesh? As always, let us know in the comments.