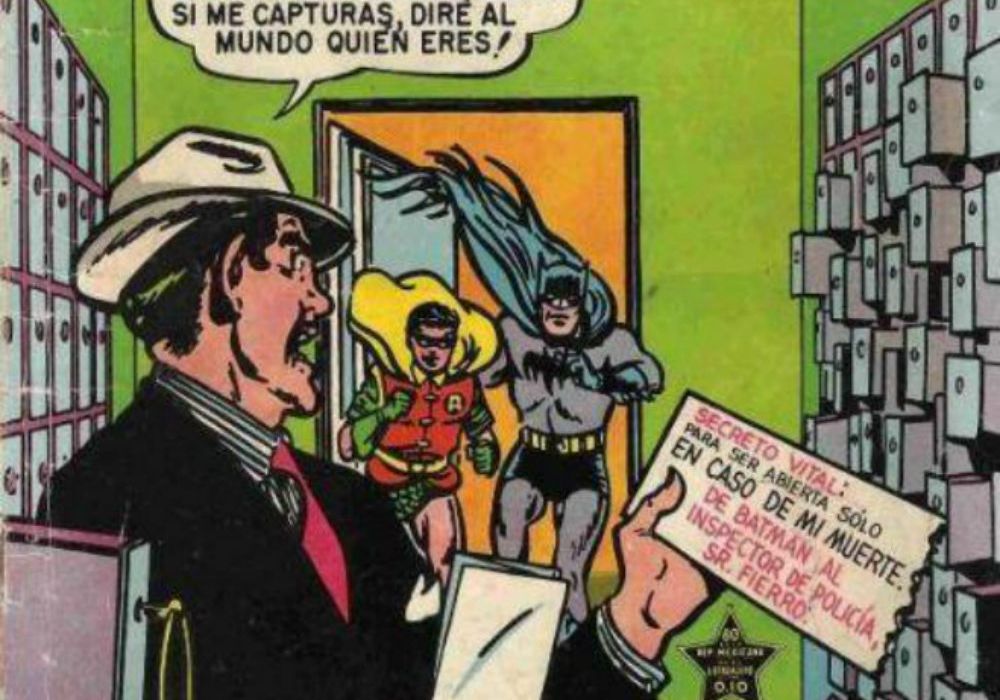 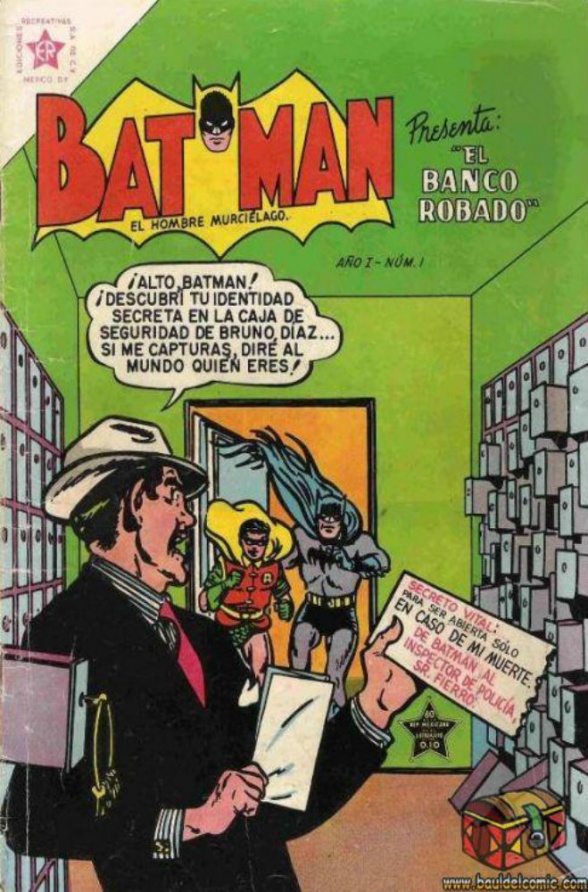 Right now, the comic industry is very diverse. Neither your gender, your race, nor the country you are from matters. Here, you are welcome, there’s a story for you.

Comics are created and enjoyed all around the world; you can find a comic shop in almost every place of the planet with the newest stuff available, thanks to the local and global publishing houses buying the licenses and reprinting these gorgeous stories in the language of their country. That’s how we get American titles to Japan, but also how Bruce Wayne turns into Bruno Diaz in Spanish, and Batman turns into Läderlappen in Sweden, Μπάτμαν in Greek, and Бэтмен in Russia.

México has had a comics industry pretty much since the industry was established. Between 1932 and 1934 books like “Adelaido,” “Paquín and Paquito,” and “Pepín” were born. These comic magazines started with stories from the King Features Syndicate (“The Phantom” was very popular), and ended up eventually publishing their own creations, with characters like Memín Pinguín from Yolanda Vargas and Los Super-Locos and La Familia Burrón from Gabriel Vargas. These comics were so popular that in their peak: they were published daily with up to 300,000 copies. It is hard to pinpoint the authors. In those times they didn’t get the credit for their stories, the only sure thing you can get is the creator of the characters, not their ghost-writers and artists.

Generally speaking, we can set down three big eras: the Era Dorada in the ’50s and ’60s, led by publishers Novaro and La Prensa. They both printed American comics — for example, La Prensa printed Marvel while Novaro handled DC and Archie — and Mexican comics about crime, horror, the wild west, love, and family. (You can look for covers of these comics on the hyperlinks above). Then we have the Editorial Vid era, dominated by the now-defunct publisher called Vid, which, in the ’90s, reprinted books from Marvel, DC, Image, Dark Horse, and various manga. Finally we have the contemporary boom, the era de las licencias, which is the one we are talking about today, an era with the most translated comics ever in México with as any as 132 titles (according to local Facebook page Sector Comics MX) in January alone. Whereas in the eras before, México had strictly the most popular stuff (Batman, Spider-Man, crossovers and events, and whatever the hot thing at the moment), now we have titles for a lot of people, from horror fans to elementary-school girls.

The comics made in México are worth mentioning for a lot of reasons. The first appearances of American superheroes — not just in Spanish, but probably in any non-English language — were done here. Batman and Superman begun to appear on anthologies like “Paquito and Pepito” between 1938 and 1940. El Superhombre and El Hombre Murciélago got their own titles in 1952 and 1954 thanks to Novaro. La Prensa used to sell Spider-Man every two weeks and when they reached the original, monthly American run, they got the rights to do their own Mexican-made, off-canon stories, drawn by José Luis Durán. They were mostly dreams or stories without affectations to the original status-quo, one big example is issue 128, in which Peter marries Gwen Stacy (you can check the covers for most of the Mexican-made issues here). We also have apocryphal gemstones, like the silver-foiled collection of “A Death in the Family,” which Editorial Vid actually printed without approval from DC, so they had to destroy every copy they had. (The few copies still on the market are very expensive). 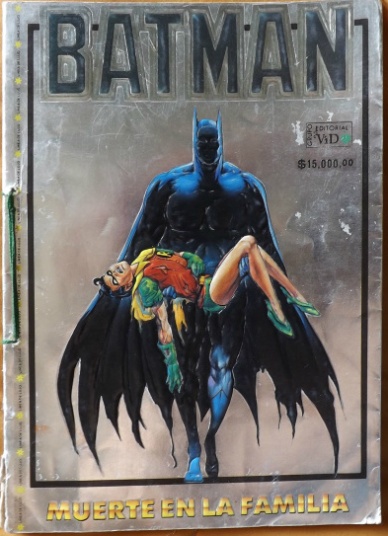 Unauthorized trade of Batman: Una Muerte en la Familia, from Editorial Vid, currently selling on Mercado Libre at $600. (Trivia: this compilation was out BEFORE the original American compilation)

Right now we have mainly three companies publishing translated comics in México. Editorial Televisa is the biggest company to date. They are part of Grupo Televisa, the biggest Spanish-language mass media company in the world. They have held the Marvel license since 2005, the license for DC since 2011, and the very first mexican license for Vertigo since 2014. Each one runs independently on three separate imprints.

Marvel in México is almost in sync with the American runs. Right now, they are about to finish “Civil War II.” DC is seeing the latest issues from The New 52/DCYou Initiatives, while Vertigo prints only classics. They have the cheapest floppies on the market, (taking in count that the dollar-peso rate is the worst in almost 20 years), the retail price starts at LESS than USD $1.20; it is also worth mentioning that the issues have generally better quality than the american version, they are printed in slightly heavier, glossy paper, the covers are brighter and thicker paper, they do have ads, but less than the original version. They also print monthly trades, mostly “greatest hits” collections for the Big Two and volumes for Vertigo, like “Preacher,” “Swamp Thing,” and “Sandman.” In the past, they have had a lot of translation errors, although they are starting to be more careful.

Bruguera Cómics started with a wide breadth of licenses and titles, but due to some market incompetence, they didn’t survive for a lot of time. They started publishing in 2012, printing books like IDW’s “Locke & Key” and “TMNT”, Dark Horse’s “Hellboy”, and BOOM’s “Irredeemable.” They were the only publishing house dedicated exclusively to making floppies. Bruguera Cómics had an almost perfect editorial care, but they had distribution problems: the books took a lot of time to get to the more distant cities. They had a company-wide hiatus for restructuring the company, but when they came back, they were never able to recover from the economical damage. They closed right at the end of 2015, leaving “Archie vs. Predator” on the table of promises.

Editorial Kamite was also born on 2012. They are the biggest independently run comic publisher in México and they have the licenses to all the Valiant series, all Terry Moore’s Abstract Studios titles — “Motor Girl” #1 is already here — Image’s “Saga,” “Chew,” and “The Walking Dead.” Image liked their work so much that the Spanish translations are made with Kamite’s cooperation. They also have the Cartoon Network BOOM! titles right now and are taking “Archie” and “TMNT” from the death of Bruguera, and a whole lot of other comics and manga. With great translations and cheap titles ($1.50), they are widely loved, the only setback is their regular delays, their argument is that the licences last only for 12 months, so, every year they have to renegotiate, and that takes months to do so, ergo, the delay, but sometimes they just drop the title for months, I have nothing confirmed because they wouldn’t talk about their internal way of working, but I would guess that, due to the fact that they are still a small team, they suffer from “production” delays, mostly editorial work: translating the comic, graphic design, adding the layouts, etc. 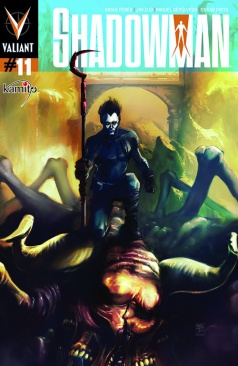 Also, Kamite is the king of variant covers. While there had been earlier attempts with modest results, they brought fervor for the gimmick. The first-ever exclusive variant cover for any Comic Con in México was an exclusive grayscale cover of the classic “The Walking Dead” #1, with the classic cover art plus gray-toning from Tony Moore. (Kamite publishes TWD in trades, but this was a one-time floppy, celebrating the 10th Anniversary of Kirkman’s magnum opus.) Now every company takes covers for the variant collectors. They also have two exclusive covers for “Shadowman” #11 and Bloodshot #0 by Mexican artist Oscar Pinto, very sought after by the Valiant fans.

Panini is the worldwide king of licensed comics. The publisher works in Brazil, Germany, Italy, France, Spain, and many other countries, and they arrived to México in 2013. They have the rights for Dynamite titles like “James Bond,” IDW’s “My Little Pony,” all the Millarverse (“Kick-Ass” is the biggest success in México since “The Death of Superman”). They also release the “Star Wars” titles. While their translations are great, but they have the most expensive books, in around USD $2.50 (still cheaper than the US!)

Finally, three mainstream book publishers are turning their eyes to the Mexican market, Océano has the local rights to “Calvin and Hobbes”, “Descender” and “Nimona”, since 2016; Planeta de Libros exports “The League of Extraordinary Gentlemen” and “Paper Girls” from Spain and it seems that they will focus on getting licenses to do mexican versions, so it can be cheaper; also Norma Editorial exports some of their gigantic catalogue, but due to the local licenses, it is hard to get american-made Spain-translated comics like their “Hellboy” hardcover collections and sell them directly here.

So, there you have it, this is the beginning of our humble attempt to show you that comics are universal. Our medium is more alive and more diverse than ever, comics truly are for everybody. I encourage you to make your own research for translated comics, you can take a look on international online shops and the International Edition section on eBay, maybe you will find your next personal treasure. 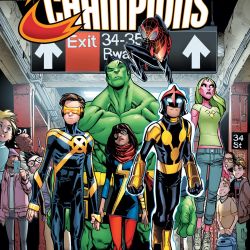 MexiComics: A Survey of Mexican Artists Working in Big 2 Comics

Que onda raza! Welcome to a new installment of MexiComics, the column where we talk all about the relation between México and Eastern comics. Today we decided to make a list of all the Mexican talent working right now in the industry; you might end up amazed of the large number of people that share […]