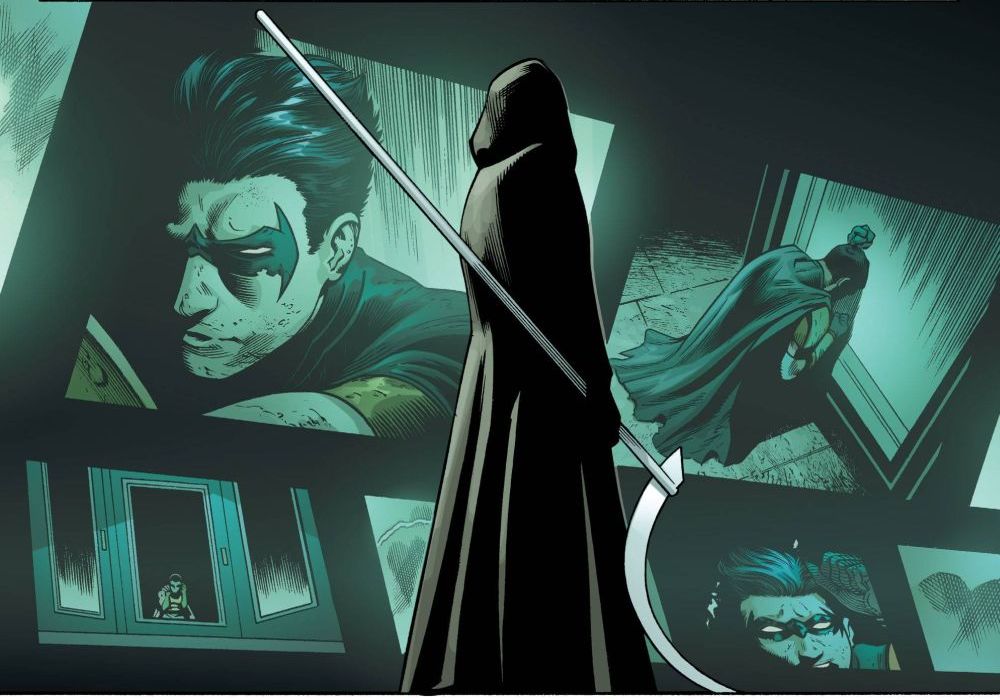 We have all been conditioned to expect that the reveal at the end of “DC Universe Rebirth” #1 was going to herald an onslaught of “Watchmen” characters popping up in our DC floppies each week. Thus far, that simply hasn’t happened. Even ‘The Button,’ which was supposed to address the great mystery, really had very, very little to do with Dr. Manhattan, or anything else relating to the Comedian’s button. It was a story about Flashes and about time travel, with only hints of anything Manhattan-related.

Similarly, even though he popped up almost a year before that issue dropped, the common belief that Mr. Oz was going to be revealed to be Ozymandias, Adrian Viedt. This has seemed less and less likely as the story has progressed, and here we are, just a few months away from the identity of Mr. Oz being revealed. But unlike the last time we talked about this, I think I actually have deduced his identity. While I’m confident in my detective skills, I recognize that it is likely wrong, but I still want to make my case.

If you don’t want to be (probably not at all) spoiled, here’s your last chance to get away.

I believe that Mr. Oz is none other than Kon-El, Conner Kent, Superboy.

There are five reasons that I believe this to be true:

Why does this matter? Well, Geoff Johns is a huge fan of Kon-El, using him (and killing him) in “Infinite Crisis,” making him a cornerstorn of the “Teen Titans,” and effectively retconning his origin to match an idea that he sent into the letters column of “Superboy” back in the 1990s. 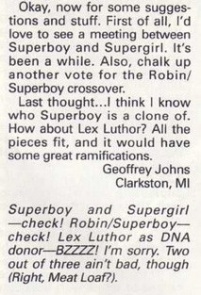 So, it makes sense that Johns would want to return to one of his favorite characters, especially one that hasn’t been used in years (more on that later). The Johns era of New 52 “Superman” was quite short, lasting just three issues, but in that run he introduced Mr. Oz, and then returned to him in the “DC Universe Rebirth” one-shot. Johns has been said to have met with every creative team before their ‘Rebirth’ books were announced, and talked through some big picture planning with them. After those meetings, Mr. Oz showed up in “Action Comics” (more on that later), “Detective Comics” (more on that later), “Superman,” “Trinity,” and “Hal Jordan and the Green Lantern Corps.” Johns clearly laid out the Mr. Oz plans for the writers of these series, and he clearly plays a huge role in ‘Rebirth’ as an event.

Now, while that doesn’t necessarily point to Kon-El just because of the ubiquity of his appearances, almost all of those book feature characters that would be intimately aware of Kon and, potentially, of his disappearance. Aside from “Hal Jordan and the Green Lantern Corps,” those books might be the most likely for Kon to show up in, if he were to appear in ‘Rebirth.’

The three characters that we have seen Mr. Oz kidnap each have very specific ties to Kon. Obviously, Tim Drake and Kon were Teen Titans together, and were incredibly close friends. For Kon, seeing Tim manipulated to not remember him would be a terrible blow. In addition, he knows Tim’s intelligence, and so he would see the warnings of Tim ‘reconnecting things’ as a bigger threat than someone who doesn’t know Tim as well.

Prophecy was hunting various ‘versions’ of Superman – well, wouldn’t a clone of Superman be of interest to him?

And Doomsday is the catalyst for what brought Kon-El into comics in the first place. It was Doomsday’s killing of Superman that led Cadmus to ramp up its Superman cloning project.

I can’t think of another character who would be as clearly tied to these three characters – can you?

Yes, there was a “Superboy” book in the New 52, but it wasn’t ‘really’ Kon-El – that Superboy was a clone of Jon Lane Kent, a clone from an alternate future. It could be said that Kon hasn’t been seen since 2011, meaning that there are six years of stories that could have led him to assume the Mr. Oz mantle.

We see his obsession with Superman present in Johns’s issues that feature Oz and, specifically, we see him tell Clark that “he is not who he thinks he is.” Now, part of this could have been referencing the events of “Superman Reborn,” where Clark is ‘made whole’ by the joining of the pre-and post-Flashpoint Supermen. But what if he also meant that Clark does not realize that he is, in fact, the ‘father’ of a clone.

I admit that this is a stretch, but depending how continuity has been re-written, Clark could have no idea about Kon. That would be a relatively huge reveal to Clark, especially as we see how paternal he has become after Jon’s birth.

5. Dan Jurgens has written most of his appearances

To me, this is the biggest clue of them all. No one loves to reference himself like Dan Jurgens. Look at who is fighting Superman right now in “Action Comics” – Mongul, Cyborg Superman, the Eradicator, Zod, Metallo, and Blanque. Aside from Metallo and Zod, Jurgens is all over those characters. He created Blanque, and the other three are all major players in the post-“Death of Superman” era, of which Jurgens was the key architect.

And who came to Superman’s rescue at the end of the most recent issue of “Action?” Well, all the ‘good’ Supers right now – Lex, Kara, Lana, Kenan, and Steel. Steel is the one I want to focus on, however. With Steel, the Eradicator, and the Cyborg Superman all showing up, this is a Jurgens wet dream – a reunion of almost all of the ‘Reign of the Supermen’ characters. All but one – Kon-El. But if Mr. Oz is part of his “Action,” then the reunion is complete.

Look, it’s not a perfect theory, obviously, but it holds some water for me. Does it work for you? Let me know either way in the comments!