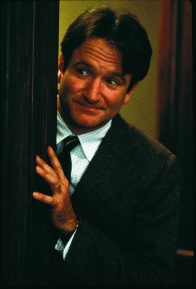 It’s been five years since Robin Williams passed away. I think about him often because, to put it plainly, he was, and remains, my favourite comedian of all time. I grew up watching him in great (and not-so-great) family films like Aladdin, Hook, and Jumanji, and, as I became old enough to watch his dramatic performances, and recordings of his riotous, filthy, and utterly extraordinary stand-up, it felt like he grew up with me too.

One of the coolest things about becoming old enough to watch Robin’s stand-up or interviews with him was learning that he was a geek, just like us. He was a huge video game fan, who literally named his daughter Zelda, and he also loved comics: in a 2010 interview with USA Today, Williams revealed his favorites included titles as diverse as Brian Wood and Riccardo Burchielli’s “DMZ,” and Taiyō Matsumoto’s manga “Tekkonkinkreet.” After his passing, biographer Dave Itzkoff recalled Williams would visit the Forbidden Planet comic book store in Manhattan, where “he was like a kid in a candy store,” while writer Warren Ellis revealed, “I used to get excited emails from comics stores all over America when Robin Williams would drop in to buy ‘Transmetropolitan’ issues.”

One of the smallest but most impactful ways Williams influenced me was in a 2006 interview with IGN, where he hilariously gave his thoughts on the difference between a comic book, and a graphic novel:

It’s a surprisingly insightful joke about how comics were perceived as trash for decades, until the popularization of the term graphic novel, one that I would share with anyone who was confused about the difference between the two – I certainly felt way cooler explaining comic book history that way.

In the interview, Robin spoke about the possibility of playing the Joker in the then-untitled Batman Begins sequel, citing his love for Grant Morrison and Dave McKean’s iconic graphic novel “Arkham Asylum: A Serious House on Serious Earth.” In a 2012 column for Empire magazine, Robin reiterated how much he would’ve loved to have worked again with Christopher Nolan (who directed him on Insomnia), explaining:

“I would work with Chris again in a second, playing anyone in anything. I’d play The Riddler in the next Batman, although it’d be hard to top Heath as the villain, and I’m a little hairy for tights. Plus, the Batman films have screwed me twice before: years ago they offered me The Joker and then gave it to Jack Nicholson, then they offered me The Riddler and gave it to Jim Carrey. I’d be like, ‘Okay, is this a real offer? If it is, then the answer’s yes. Don’t pump me again, motherfuckers.’ I’m using this article as an ad. Chris, call me, I’ll do anything. I could be a great character — or some weird little man in the background in Arkham Asylum.” 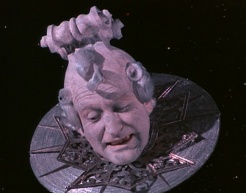 Williams in 'The Adventures of Baron Munchausen'

Robin had played a comic book character before, starring as the title character in Robert Altman’s 1980 film adaptation of “Popeye” (what a weird sentence huh?), well before the current Golden Age of comic book movies and TV. Naturally, since his passing, among many things I ponder about Robin, were he still with us, is what new role he might’ve landed: he could’ve finally starred as the Joker in this fall’s reimagining, or been an even more terrifying Ego the Living Planet in Guardians of the Galaxy Vol. 2 (though he probably would’ve deemed the role typecasting after playing the King of the Moon in The Adventures of Baron Munchausen). Likewise, Robin could have joined the ranks of other humorists, like his good friend Steve Martin, in writing a comic book. One thing’s for sure: he’d probably have sneaked in a beastiality joke.

In his last stand-up movie, 2009’s Weapons of Self Destruction, Williams joked the world had been on a drug called Fukitol during the past 15 years, because, how else could you explain the country somehow electing both George W. Bush and Barack Hussein Obama? It seems the world’s relapsed into using it since he died, given Trump and Brexit; I certainly wish he was still around to help us make sense of it all (there was a great routine about Schwarzenegger’s immigration policy he could’ve repurposed for Trump’s wall). Perhaps I should look to the dystopian comics he loved instead – after all, “Transmetropolitan” is now widely considered as being prophetic in Trump’s wake: I suppose it was typical of Robin to be five steps ahead of everyone else like that.

Here’s to you, captain.