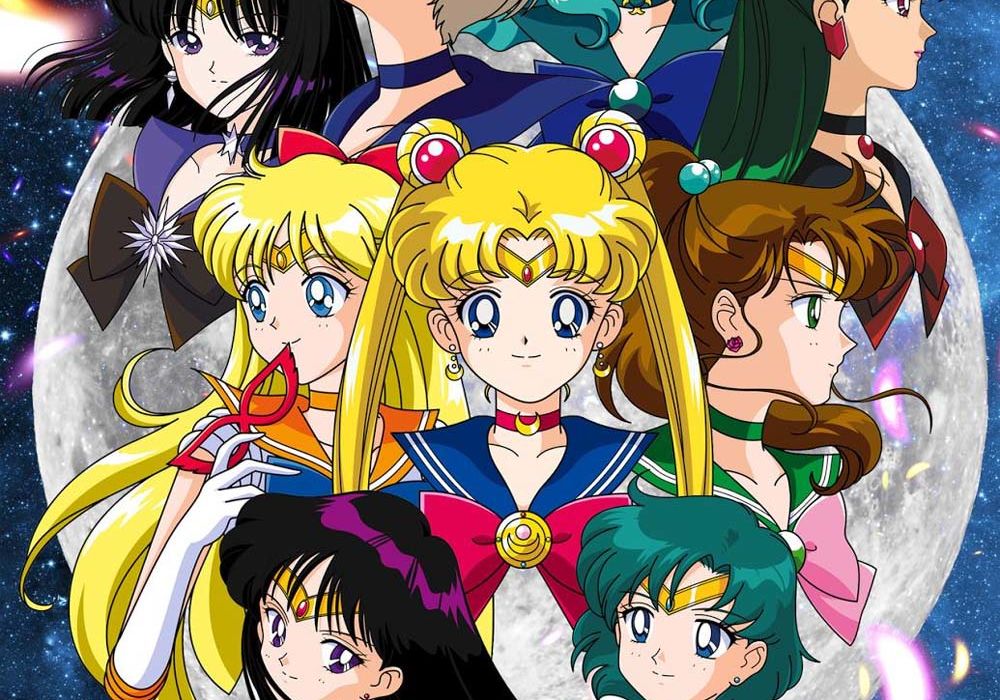 If you spend a lot of time in the artistic circles of Twitter, you may have noticed the “Redraw Sailor Moon” challenge was a popular trend in May 2020, with everyone offering their own (sincere or comedic) take on an intense screenshot from the anime. It seems, 28 years after her debut, Naoko Takeuchi’s manga heroine Usagi Tsukino/Sailor Moon remains more popular than ever, even though the generation that grew up reading and watching her epic battles against the forces of evil have long since grown up. 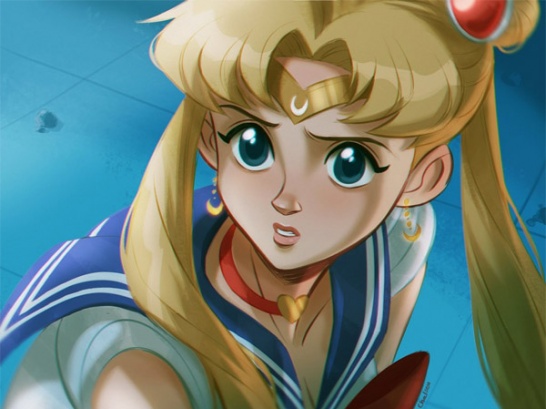 The meme inspired me to watch the uncut Viz Media dub of the original series, and as a result I began to give serious thought to a notion I always have when I think of “Sailor Moon,” which is — because I’m nothing if not addicted to thinking about adaptations of my favorite things — that it would make a great animated movie, ala Frozen, Big Hero 6, or Spider-Man: Into the Spider-Verse.

To be clear, there have been three animated films, each tying into different seasons of the original anime (with more on the way, namely the two-part Sailor Moon Eternal, which will act as the fourth season of Sailor Moon Crystal), nor do I really want a Hollywood “Sailor Moon” movie — this is about the best case scenario. Since Blade and X-Men twenty years ago, superheroes have come to dominate tentpole releases, and like the western, they will continue to do so for decades to come (possibly even longer, if their presence in comic books is any indication), so studios will seek more familiar properties to turn into hits.

Furthermore, Disney itself did seek out the rights to “Sailor Moon” in 1997, as a potential vehicle for director Stanley Tong (Rumble in the Bronx, Mr. Magoo). Thanks to Mr. Magoo‘s failure, our heroine was spared the fate of starring in another dismal ’90s family film, but it’s a startling reminder that an American take may be, as a certain Disney villain once put it, “inevitable.” Filmmakers do love to rework dubious ideas (see The Hobbit trilogy and Tolkien’s abandoned 1960 rewrite, or Star Wars: The Rise of Skywalker and “Dark Empire“), and ironically, I’m basically saying they should remake the anime, which is what Bandai pitched to Toei before it was simply dubbed.

There are two reasons I feel Sailor Moon and friends should stay in the animated world: firstly, as much as I love the cartoon and everything about it, it is incredibly cheesy, and a live-action take would try to rationalize or tone down many aspects that make it, well, “Sailor Moon.” I can see certain approaches to the costumes being made to get audiences to take the characters seriously, which would render them too militaristic looking: 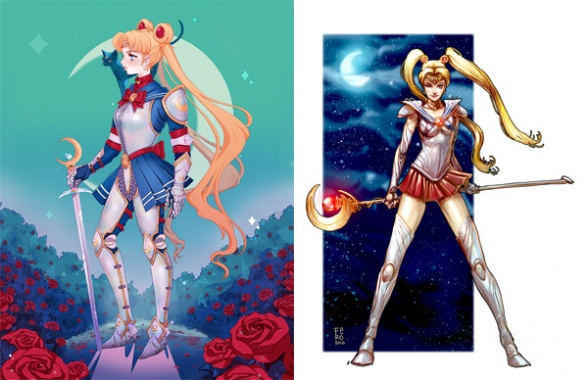 Usagi is not meant to look like a badass, she’s a clumsy crybaby who saves the day in spite of that. Some may argue it doesn’t matter if the Sailor Guardians wear armor or hi-tech wetsuits, instead of their namesake school uniform/figure skater outfits, but it would cause the series to lose something of its campy charm, and besides, Usagi’s love interest is a magican-styled superhero called Tuxedo Mask, whose signature weapon is a rose — there’s no way to make that realistic!

The second reason is that, because Usagi and Minako/Sailor Venus are blonde, blue-eyed girls, it would be creepy if Asian-American actresses were cast in these roles, and then subjected to the same treatment Jessica Alba got on the Fantastic Four movies, where her contacts and wigs seemed like attempts to erase her Latina heritage. (I won’t dignify the notion of removing Usagi’s signature blonde pigtails with a response.) 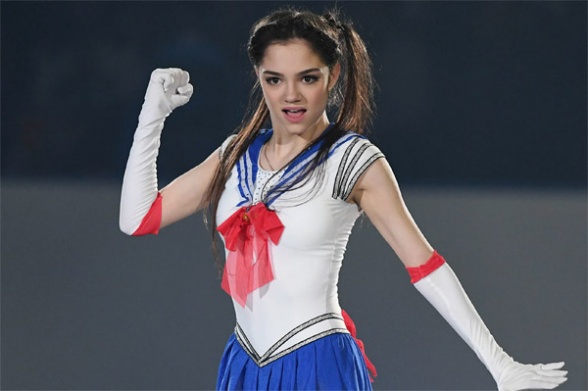 Although figure skater Evgenia Medvedeva did make a compelling pitch

Similarly, if white actresses were cast in the roles, arguments would proceed over the ethnicity of a reincarnated Moon princess, which would drag down any meaningful discussion of acting opportunities for Asian-Americans, and encourage the worst people in the world to send abusive messages to the cast. In a sad coincidence, Evgenia Medvedeva, the figure skater who was cast as Usagi for the ice show Sailor Moon Prism on Ice, has received hate mail for being a Russian in Japan — the project could do without a shadow like this.

Conversely, a mainstream movie would have to make the five main Sailor Guardians (Usagi, Minako, Ami, Rei, and Makoto) more physically distinct, even if they are color coded — Usagi and Minako’s resemblance could be especially confusing to newcomers. It’s bound to be a controversial topic, as everyone has a Guardian they’re particularly attached to, and would be reluctant to see altered. My personal favorite is the tall, tough Makoto/Sailor Jupiter, but if it was decided to make her Latina and/or Black, I would accept it — though I would argue that particular decision could accidentally play into aggressive stereotypes about women of color, and that the studious Ami/Sailor Mercury or Minako would be better choices. 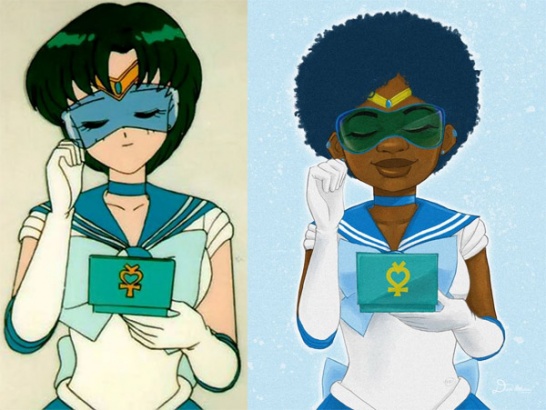 “Sailor Moon” is also a famously queer franchise, but it will take a while to introduce heroes like the lesbian pair, Haruka/Sailor Uranus and Michiru/Neptune, who debuted in the third arc/season of the series. (By the way, Uranus will probably have to be changed to Caelus.) There are hints throughout the comic and cartoon that all the girls are bisexual, and making the subtext text with some of the five main Guardians would be groundbreaking and inspiring for young, queer kids; it’d also provide some necessary counter representation to explicitly gay villains like Kunzite and Zoisite. (While bingewatching the original anime, I noticed Jupiter and Venus tend to pair up a lot — just saying.) 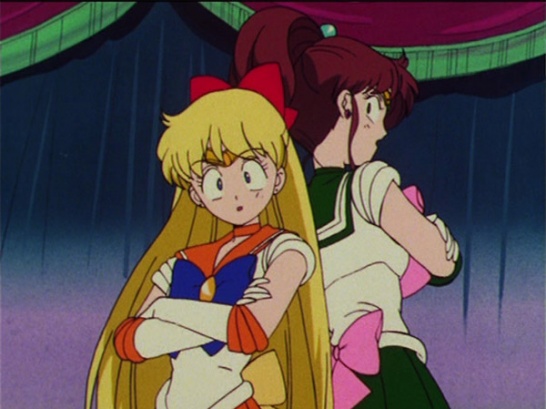 That's right, I'm onto these two

Are there magical girl comics or cartoons better suited for a Hollywood film? Perhaps, but consider Dragon Ball: Evolution and The Last Airbender — which live-action take was more insulting? I’d go with The Last Airbender, because Avatar was a recent cartoon that provided a much more sophisticated bedrock for a great film series, and it was still awful. “Sailor Moon” can shrug off a bad movie better than newcomers like Steven Universe — it is also the ur-text of the genre, and can pave the way for adaptations of homages like “Zodiac Starforce,” “Crystal Fighters,” or “Shattered Starlight,” just as the older Batman and Spider-Man films made The LEGO Batman Movie and Spider-Verse palpable to a general audience.

Ultimately, I hope if Hollywood ever adapts “Sailor Moon,” newcomers and fans like myself, young and old, can all enjoy it — it is an unashamedly romantic and feminine franchise, that has inspired so many artists, and should continue to provide a colorful, warm, and optimistic world for generations to come. So on that note, I’ll leave you with links to those whose work I’ve shared, and a gorgeous photo by Davide Sasso, whose pictures of Japan are like the anime come to life — any film worth its salt should consult him on capturing that nostalgic glow. 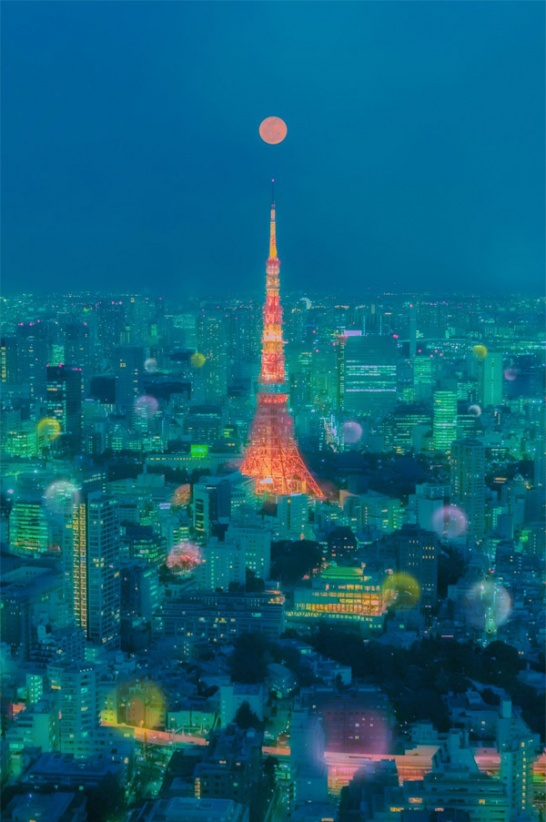 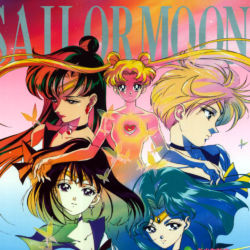 Featured LaserDisc artwork by Ikuko Itoh.Welcome back to Mooniversity, our column for all things “Sailor Moon,” and happy Lunar New Year to all who celebrate (coincidentally, it’s now the Year of the Rabbit.) Today we’re revisiting the third season of the ’90s anime, Sailor Moon S (as in Super), which adapted the ‘Infinity’ arc of […] 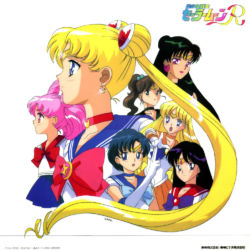 Welcome back to Mooniversity, our monthly look at all things Sailor Moon. Today we are revisiting Sailor Moon R, the second season of the ’90s anime (which, depending on who you ask, stands for Sailor Moon Return, or Sailor Moon Romance.) Slightly shorter than its predecessor, at 43 episodes (which first aired in Japan from […] 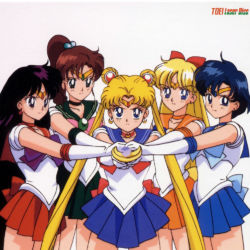 [Header art from the LaserDisc releases]Welcome back to Mooniversity, our monthly look at all things Sailor Moon. Today we are revisiting the first season of the anime itself, simply named Sailor Moon, which aired in Japan from March 7, 1992, to February 27, 1993. Offering an expanded, monster-of-the-week take on the initial ‘Dark Kingdom’ arc […]