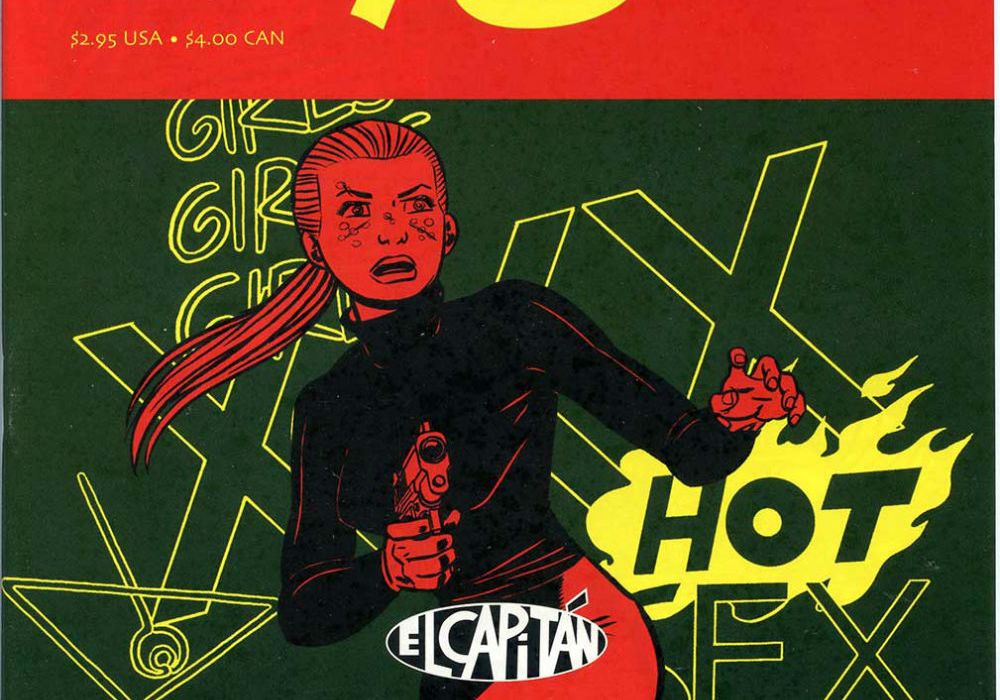 In David Lapham’s iconic “Stray Bullets” nothing sacred is safe. A series of intertwining stories build a world of hitmen, drifters, and mobsters where children get caught up in violence and sex but also a world of regular people trying to survive and love. Throughout the 40 issues of the original run, Lapham juxtaposes and combines stories of savage criminal violence with those of domestic, sexual relationships. While most of “Stray Bullets” focuses on the crime noir aspects, the focus does shift at times. The third volume, ‘Other People,’ collecting #15-#22, for example, distinctly focuses in on the lives and loves of LA residents. Lapham toys with the innocence of his characters as they try to figure out the messed-up world he draws them in. Some are naïve to sex, some are naïve to violence, some are naïve to other people. None have a healthy relationship to those things.

#15 and #18, entitled ‘Sex and Violence Part 1’ and ‘Sex and Violence Part 2’ respectively, are two issues that feel like a natural place to look when talking about sex and violence in “Stray Bullets.” In Part 1, Virginia Applejack, a thirteen-year-old runaway and the closest thing “Stray Bullets” has to a protagonist, decides to run away from Beth, a young woman on the run from the mob who took Virginia (going by ‘Amy’) in, after an argument about Beth’s sex life. Virginia finds a place to stay with Bobby, an innocent kid who dreams of being a comic book artist, while hiding in his basement, Virginia overhears Bobby’s mother having sex with various partners. Just as Virginia decides to move on, Bobby’s father returns home to find his wife in full dominatrix gear in the bedroom with a gagged man, leading to a violent confrontation that is cut short by Beth’s arrival to take Virginia back to safety. Part 2, meanwhile, is an Amy Racecar story! Amy Racecar is Virginia’s fictionalised version of herself, a ‘world-famous gangster’ who gets into absurd, high-genre scrapes. In this story Amy is working as PI investigating a string of infidelities in a Martian town. In the final twist, in conspires that the whole town is aware of the infidelities and have embraced them. Much to Amy’s horror, they set up the mystery as foreplay to welcome her to their swinging town. The last page shows Amy in court saying she ‘had to kill them all’ because they were ‘perverts.’

These issues are parts 1 & 2 but, as with much of “Stray Bullets,” their plots are separate. Where these differ from other “Stray Bullets” stories is that one is a response to the other. Amy Racecar is a character that Virginia Applejack uses to process the mature things going on around her that she is too young to understand. Across the series Virginia experiences a lot, and while she insists that she has the maturity to handle them, the stories she tells herself are consistently absurd, reductive, and immature. She is still a child. What makes this Amy Racecar story stand out is its titular linkage to a previous issue, it is the clearest of any as to which of Virginia’s experiences it is responding to.

Virginia has a profound ignorance of sex, she has experienced violence directly but not in sex. To her, sex is more taboo than violence. The ending of Part 2 has Amy reading a statement to a judge to try to avoid the electric chair, she concludes, ‘our society has always been plagued by the problems of sex and violence, and, in my humble opinion, your honor, if we’re not careful […] sex is going to win.’ The crowd surrounding Amy is shocked and dissatisfied with her explanation, the final caption boxes reading, ‘I don’t think they’re buyin’ it. Maybe I should have accepted that court-appointed attorney.’ If it has to be the battle between sex and violence that Amy frames it as, I’d want sex to win. Amy Racecar stories in “Stray Bullets” are supposed to be absurd and slightly nonsensical because they are stories that Virginia, a child playing grown up, tells herself to process what’s going on around her. They’re about mature subjects but they’re not a mature perspective. Every sexual encounter in both “Sex and Violence” issues is consensual and appears enjoyed by everyone involved. Whether that’s Beth and Bobby Fish (cut short by Virginia’s protestations), or Bobby’s mother’s various partners in Part 1 or whatever’s going on with the convoluted swinging town conspiracy of Part 2. Everyone should have agency in their sex life. The purpose of violence, meanwhile, is to remove agency. To the young Virginia, the sex-indulgent LA around her is crazy and confusing, but violence makes sense. At the end of Part 2, Lapham’s customary eight-panel grid squeezes in around Amy as the characters from town reveal that were aware of each other’s sex lives. Amy is trapped by their ability to reconcile each other’s desires. Her only way out is to deny them that; turn the page to a half-page panel of her explaining why she killed all of them.

Reconciling desire and violence is muddied by the inclusion of BDSM in both stories. In both issues we see a man who is gagged, tied up and dominated by a woman. In “Part 1” there’s also some whipping and humiliation. This kind of kink seems violent; it is playing with violence, the thrill and excitement comes from having agency removed. It should be trusting and consensual. Virginia’s reaction to the gagged man is an uncomfortable snigger, ‘she couldn’t help but laugh, but inside her guts were twisting.’ Violence in this sexual context is less understandable to Virginia than overt physical violence. We first get a hint at this in “Part 1” when Virginia and Bobby are playing together in Bobby’s house while his parents are away. They find the whip in his parents’ bedroom; Bobby pretends to be an uncontrollable man-eating tiger, while Virginia tames him as Wonder Woman (a character with a rich relationship to kink). Virginia naturally taking the dominant position amongst the signifiers of kink, without knowing the significance. In “Part 2” meanwhile, the appearance of kink is a fleeting moment, the wife of Amy’s assistant has a man tied up in her bedroom, another example of shameful perversion that dooms the town.

Virginia’s life at this point in her story has not been particularly normal. She seems to cling onto certain normative ideals despite this. When Bobby’s parents first return home, they flirt and go to the bedroom. Virginia’s narration says, ‘the aging couple made pretty big fools of themselves, but in a sweet way. At least they were married, and seemed to like each other.’ By the bottom of the page they don’t seem to like each other, as they argue and Bobby’s father storms out the bedroom. ‘‘Nothing’s ever good’ [Virginia] thinks.’ Virginia’s narration across this #15 is framed as a story she’s writing in her notebook, as a semi-diary where she is a ‘little angel’ and Ricky Fish, who Beth brought home at the beginning was a ‘devil.’ The language of angels and devils is overly simplistic, trying to put complex events into a shape she can understand, a shape she longs for, a stable shape.

But that shape is vague and cannot hold. Lapham letters her narration in a small, hand-written style that’s jarring to read; going from the bold clarity of Lapham’s art style and the block caps of speech to these little joined-up letters. Virginia’s writing is separate to the reality of the story, it’s written in an omniscient third person in the past tense but she doesn’t know how the story ends yet. Ultimately the trauma and violence of the ending comes from the return of Bobby’s father, who attacks his wife and her lover. The return of the partner in the normative sexual relationship that Virginia approves of brings the violence. Bobby’s mother is asserting sexual agency outside of her marriage (something Bobby’s father spends another “Stray Bullets” story desperately fantasising about) and is punished by the normalcy Virginia desires. The last caption of ‘Part 1’ has her give up on this story, dismissing it on the one hand as ‘too sick’ and on the other, ‘just silly, all that angels and demons crap.’ So instead, we get the Amy Racecar story of two issues later, where a self-righteous individual murders a town of ‘perverts.’ I don’t think Amy Racecar is the hero here, I don’t think you’re supposed to. Amy, Virginia’s author-write-in hero, kills a town of people who, rather than go behind each other’s backs, became open about their sexual desires.

‘Sex and Violence Part 1 & Part 2’ present a story of a girl thrust into violent, sexual spaces before she should, who clings onto problematic, yet pervasive, ideas of sex and violence. Sex and violence in “Stray Bullets” is a topic that could fill an entire book. I’ve only touched on a few ideas here, in just two issues, but they are pervasive across Lapham’s work.