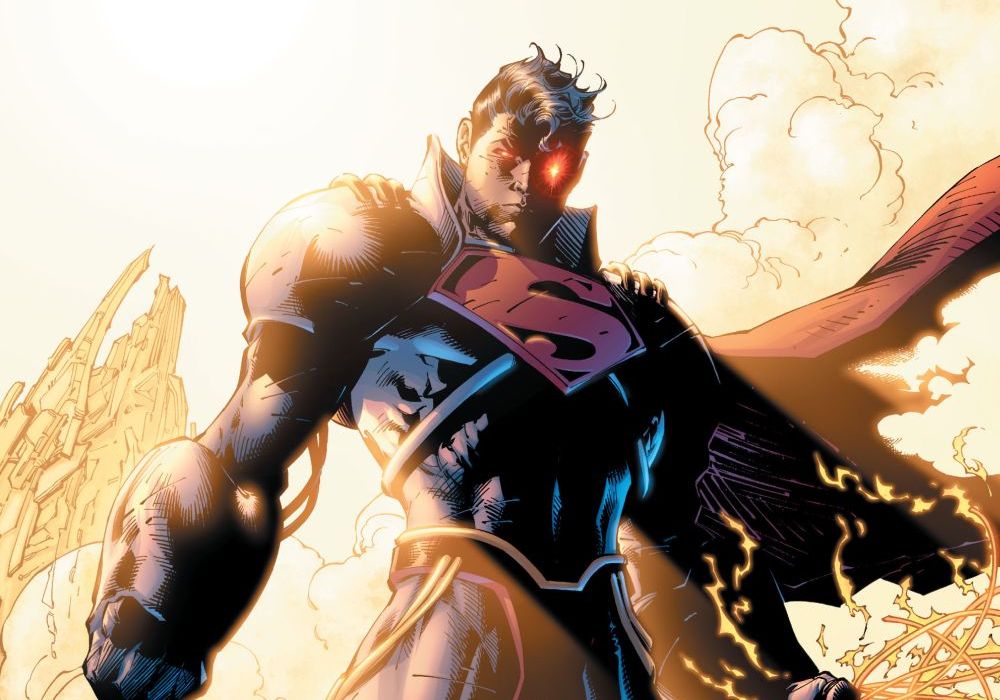 With “Superman: Reborn” happening over in the pages of “Superman” and “Action Comics” this month, there was a lot of speculation about just who would be revealed to be the Fake Clark Kent. As we’ll touch on shortly, we had our hopes up that it would be Superboy-Prime – those hopes were dashed. But all the Superboy-Prime chat got some of the longest tenured Multiversity staffers – Walt, Alice, Vince, Zach, and Brian – excited enough to put together this piece, where we talk a little about why the character is one of our favorite, and most elusive, characters in comics. 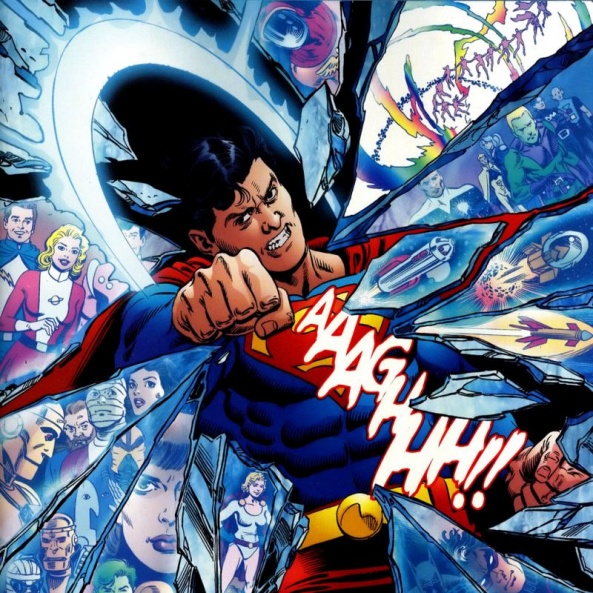 Brian Salvatore: Well folks, Walter made a comment to me over G-Chat, that I then shared with Vince and Zach, which Alice eventually came upon, and we all had it. Superboy-Prime fever. The general consensus around the Multiversity offices was that the ‘fake’ Clark Kent was going to turn out to be Superboy-Prime, the comic-reading, Source Wall-punching, one-time Sinestro Corps member who we all know and love.

Of course, we got Jurgens’d and it wasn’t Prime, but I thought it would be fun for us to chat about Prime and why he’s such a fascinating character.

So, to get us started: what is it, to you, that makes Prime such an interesting character?

Alice W. Castle: Superboy-Prime, to me, is a pure DC idea. He’s a concept of pure metanarrative, using shifting realities and multiple universes to examine an iconic character.

Essentially, for those who haven’t encountered him before, he is a dude from Earth-Prime (or Our Earth, where DC superheroes exist in comics) who gets superpowers and does what any self-entitled comic book nerd would do given the chance: he mcfreakin’ loses it.

He’s the product of a very critical eye being placed upon the audience of comics themselves and I feel that’s why people dislike him. He’s too real for them.

Vince Ostrowski: Well, for starters he’s representative of the thing I love most about DC Comics: the metatextuality. I understand that has little to do with any of his character traits or story arc, but it’s the reason I like seeing him in the comics. I like when DC treats their superheroes as icons or celebrates them as pillars of American fiction, and having a character that comes from an earth where the only superheroes are in comic books is putting a layer on the fiction that I just love.

Zach Wilkerson: The metatextual element is huge for me as well, I’m a sucker for that sort of thing. There’s also the aspect of being a fallen hero, one who should never be redeemed (at least in my opinion). Prime was raised to the upper echelons of DC’s pantheon in “Crisis on Infinite Earths,” only to fall 20 years later in “Infinite Crisis.” A petulant, evil Superman who is also the multiverse’s most disillusioned Superman fan is just too perfect. Prime has played a major part in two of my favorite stories of all time; “Sinestro Corp War” and “Legion of 3 Worlds.” He’s also been in some not so great stories, but I’ll leave that be for now. The types of stories that can be told with Prime are so varied, from traditional cape events to more introspective looks at the nature of comics, both the industry and its fans. 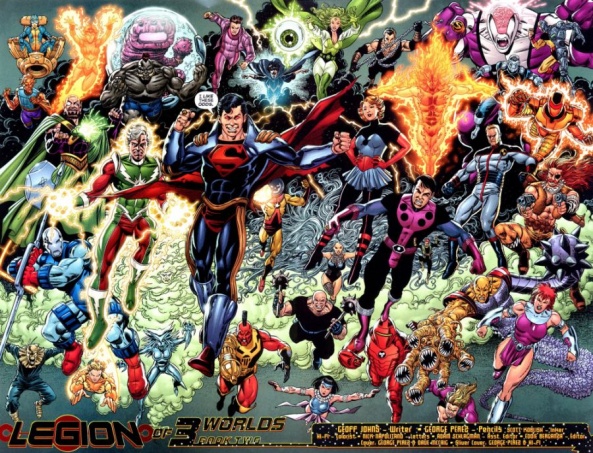 Walter Richardson: Zach, you seem to have left Countdown off your favorite Primetime stories list.

The thing I love about my boy SBP is that, in some ways, he’s Johns making fun of himself. Obviously, Johns didn’t create Prime, and he isn’t the sole person to have written him in the modern age, but when Johns writes him there’s a certain self-deprecating quality to him. Sure, he’s a kind of mockery of “nerd rage” or fanboyishness (that’s a word, I swear), but you can tell that it isn’t really mean-spirited like, say, a Millar-equivalent character would be.

Zach: Haha, “Countdown” falls under the “not so great stories” banner. Though, one could probably argue that “Countdown” is a fitting vehicle for ol’ SBP. Nonsensical, ham-fisted, and rage inducing.

Brian: If Millar wrote him, he would literally die jerking himself off.

I’m going to echo everyone else’s thoughts here: he’s a character that could only be created by DC, and could only really be appreciated by folks who see themselves in him. I’m reminded of the “Blackest Night” tie-in where he goes to the DC offices to raise hell – how many of us haven’t jokingly said to friends (or, you know, on a podcast) that they’d love to straighten out writer X for how they are handling their favorite creations?

As both Zach and Walt alluded to, he has been a part of some great stories, as well as some not so great ones, as is true of any character who has been around long enough in a shared universe. But because Prime isn’t used all that often, the goods seem great and the bads seem terrible. It is almost impossible to think a story involving him to be just OK, because his presence is usually what makes each story work or fall.

Zach brings up the “Sinestro Corps War,” and that’s a fascinating SBP story, as it is one of the few times that the character is thrust into, more or less, a “normal” story. It isn’t a story built around the multiverse or the concept of meta-narrative; he’s just a member of the gang, along with Arkillo. Do you guys think the character should be used in this type of setting more frequently? 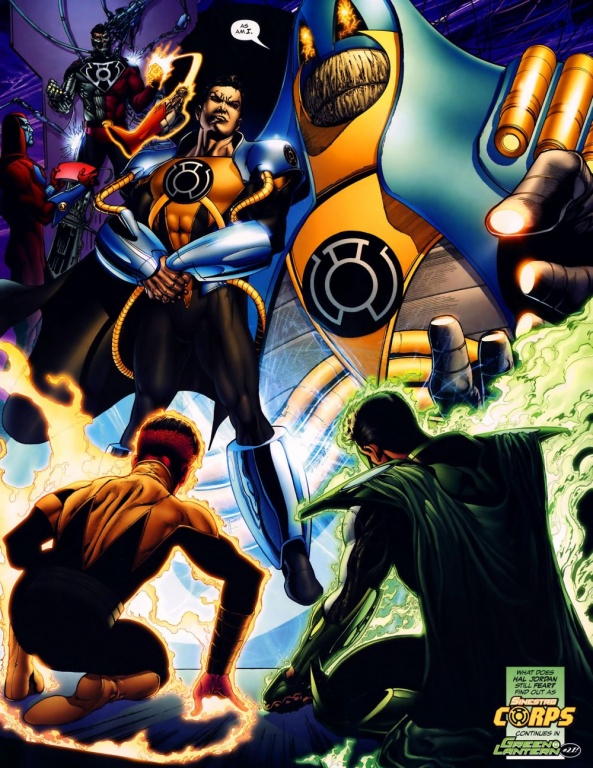 Alice: I think, as we’ve mentioned, what makes Superboy-Prime feel “special” or important, as it were, is how sparingly he’s been used. He’s almost like DC’s Uatu: if he shows up, shit’s going down.

I would be worried that SPB showing up in more normal stories would dilute that and undercut what a thrill it is to see him turn up when he does. Even in huge multiversal stories like “Final Crisis” or “Multiversity”, I’m glad he didn’t play a part because I feel like he’d take over the whole narrative.

It kind of happened in “Infinite Crisis” where, even though there was so much else going on, it kind of became about him in the end because he’s such a large personality.

Vince: Let’s not kid ourselves though. A little Superboy Prime goes a long way. I don’t think he should be a regular member of any title with the exception of “Superboy Prime and His Pal Dan Didio”

Walt: And I think we saw that in Sinestro Corps War. This was a Green Lantern story, where the big bad was the Green Lantern big bad, but as the story approached its end Superboy Prime kind of stole the spotlight, despite not really being a Green Lantern antagonist. But then, it also had Cyborg Superman and the Anti-Monitor, which… you know, now that I think about it, Sinestro Corps War was a real mess of a story, as much as I like it. But I digress. 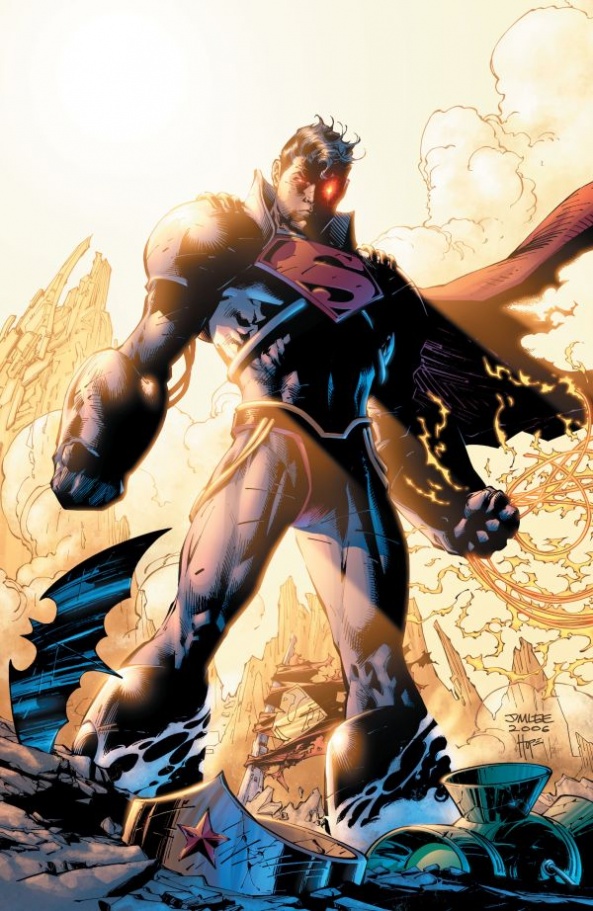 Brian: If he tends to dominate every story he appears in, and he doesn’t necessarily play well with others in a storytelling sense, then what do we feel is the best use of the character? Is he a go to deus ex machina, should he headline his own book, or what?

Alice: I’m honestly not sure. I think his best use, for me, was “Infinite Crisis” and the now infamous punching a hole in reality. I remember Geoff Johns saying something about how his take on Superboy-Prime is someone dealing with the anguish of losing their entire reality and lashing out in anger and grief taken to the nth degree. That’s something that fascinated me: he’s not a pure supervillain, but closer to exaggeration of an anguished teenager.

I think going past that and into “Countdown To Final Crisis” and “Legion Of 3 Worlds”, he became much more arch and downright sadistic as writers had him lean into the supervillain-ness. I think the mystery Clark Kent theory was an opportunity to bring him back as an almost Bizarro-like villain who really wants to aspire to be just like Superman, but can’t quite get there and his frustrations get the better of him.

Alas, that’s clearly not the case, but I think Rebirth would allow for a somewhat more sympathetic portrayal of the character emerge. At least, one that’s more reflective of the current comic book fandom.

Vince: I think Alice said pretty much everything there. From a pure frequency standpoint, I think he should only be used about every 3-5 years. It’s said that DC Comics has a “soft reboot” roughly every 5 years, and that’s probably a good time to bring him out too.

Zach: Rebirth, in my opinion, was the perfect time to reintroduce and revitalize the characters. As you all know, I was sold on the Prime theory. Of course, we didn’t get the big Prime reveal I’d hoped for, which casts my expectations for future uses of this character in doubt. If DC won’t roll SBP out for a story that seems perfectly and uniquely suited to him, when will they?

Brian: Well that’s the big question, isn’t it? DC doesn’t exactly have a history of discretion with its characters, especially its villains; once a character is considered cool and/or interesting, they shove them down our throats until they decidedly are not (see Quinn, Harley). There was a time in the early 00s, in the midst of “Infinite Crisis,” “Legion of 3 Worlds,” “Sinestro Corps War,” etc, that it felt like he might be the next overplayed character, but DC rightly course corrected. My fear is that they went too far the other way, and now don’t have a plan for when, or if, he will return.

Of course, he’ll probably wind up being Mr. Oz, and we’ll all have a laugh over this.