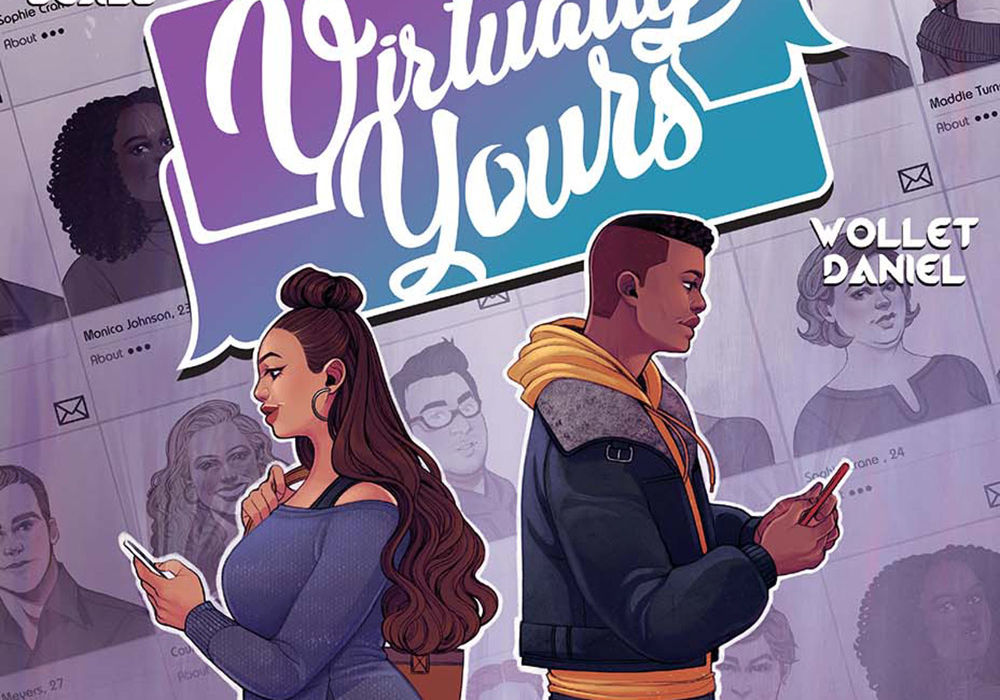 Last week, comiXology Originals announced a new original graphic novel, “Virtually Yours,” by Jeremy Holt and Elizabeth Beals. The book, a modern twist on a romantic comedy, took inspiration from many real places that pop up in the book. Holt talks us through some of the locations, and shows off some of Beals panels that feature said locations. 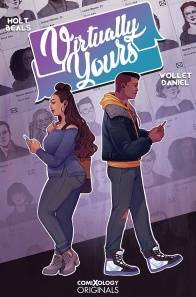 Shouldn’t finding a life partner be more challenging than ordering a pizza? Welcome to Virtually Yours, a virtual dating app that provides all the proof of being in a relationship without actually being in one. With her career front of mind, Eva Estrella joins Virtually Yours, after a nudge from her sister, to alleviate some family pressure as she continues to look for her dream job in journalism. While Max Kittridge, a former child star in the middle of a divorce, takes a gig at Virtually Yours servicing multiple clients as a fake boyfriend. As they navigate their current circumstances, both Eva and Max find that sometimes what you’re looking for is right in front of you.

Virtually Yours is a rom-com for the digital age from writer Jeremy Holt and artist Elizabeth Beals. This exciting new collaboration includes letterer Adam Wollet, book designer Tim Daniel, and editor Kat Vendetti. Together, they present a refreshing take on a beloved genre that will appeal to anyone familiar with love in the time of the internet.

“Virtually Yours” takes place in a very real but also fictionalized version of New York City. What I love most about crafting stories set in real locations is the opportunity to revisit familiar streets and beloved haunts of mine that have since disappeared. For this story, I had the pleasure of hanging out in a version of Brooklyn where the following locations still exist. I also include locations that are still with us. 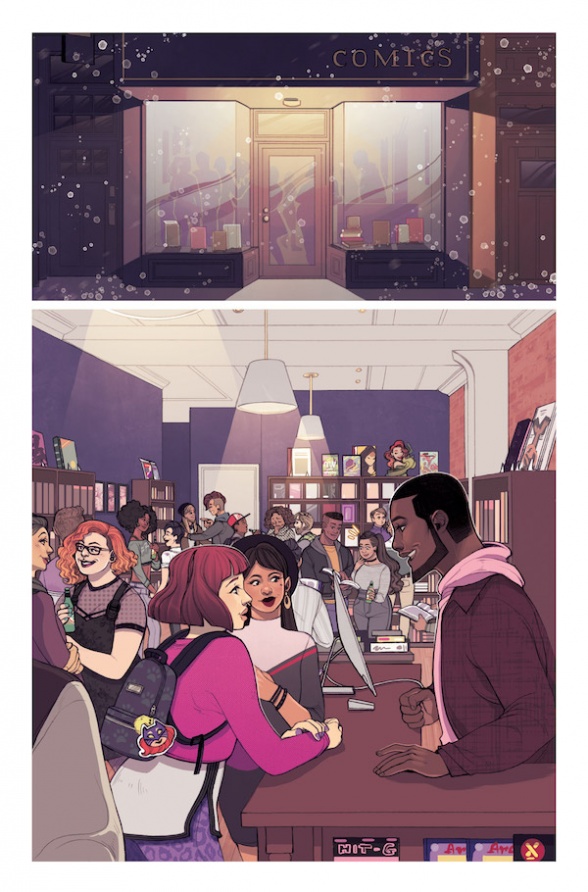 Formerly located at 470 Bergen Street in Prospect Heights Brooklyn, this beautifully designed and curated shop was my social gateway into comic books. The proprietors, Tom and Amy Adams cultivated an inclusive communal space for fans and creators alike. I attended many in-store signing events over the years, where I was introduced to industry professionals, and formed long lasting friendships. I miss my weekly trips there to pick up my pull list from their one faithful employee Tucker Stone.

Formerly located at 249 5th Avenue in Park Slope Brooklyn, I was first introduced to this charming eclectic bar by way of its original location at 231 E. 14th Street in Manhattan. I spent many late nights at the original location when I lived around the block on 13th Street. I eventually relocated to Park Slope in 2011,and was thrilled to see that Beauty Bar had opened a new location in my neighborhood. Unfortunately, I never did step foot inside, but thankfully I was able to supply Elizabeth with plenty of reference images pulled from the internet.

The Museum of Natural History 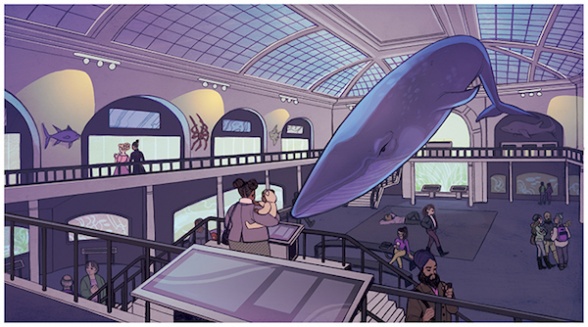 I used to work at the Guggenheim Museum handing out audio tours. Thanks to that job, I was granted free access to all of the museums in New York City. The Museum of Natural History holds a special place in my heart because of its dazzling Ocean Life exhibit. There was no way that I was going to write a romantic comedy without somehow including this particular exhibit. More specifically the terrifyingly awesome diorama of a giant squid and sperm whale locked in battle. I have had a fascination and love for giant squid since I was a child. My admiration increased after seeing the diorama featured in Noah Baumbach’s film The Squid and the Whale. The very next night I had a completely random chance encounter at a bar with the film’s star Jesse Eisenberg, who struck up a conversation with me. We shared a wonderful twenty minute exchange. 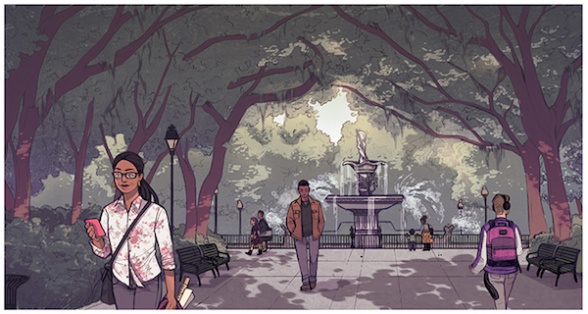 I, along with my co-creator Elizabeth Beals, attended the Savannah College of Art and Design. Our time there didn’t overlap, but I thought it’d be fun to include our alma mater as a location in the story. She is the absolute best artist for this story. Her extensive and impeccable attention to every detail in every panel truly brought this story to life. Especially for the various locations that require it, in order to sell the visuals to the reader. Anyone that has ever been to any of the locations mentioned here will particularly appreciate Elizabeth’s painstaking work. For anyone that hasn’t, you now have a very clear idea of how special these places were and are.