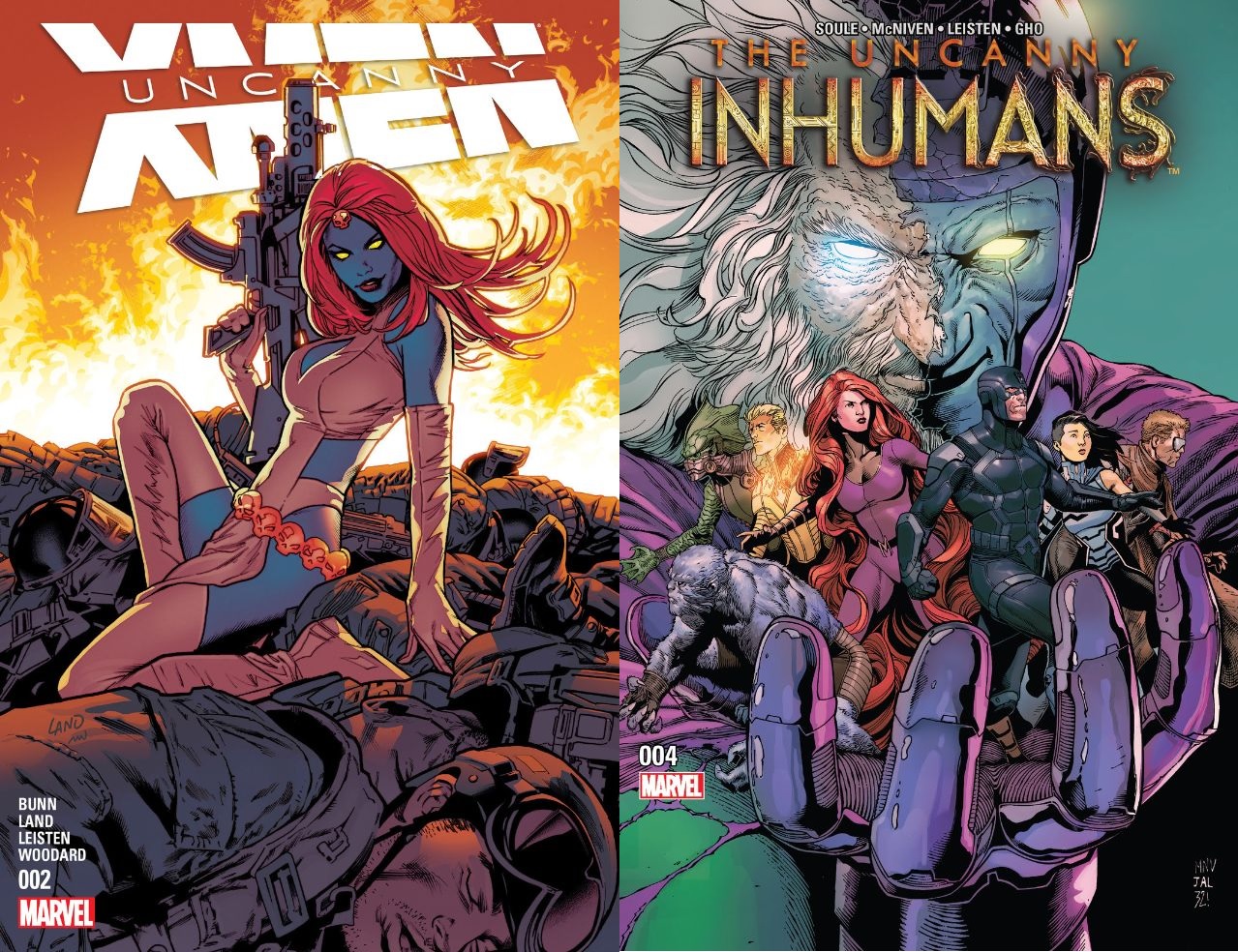 Note: If the title didn’t make it clear, there will be massive spoilers to “Uncanny X-Men #2”, “Uncanny Inhumans #4” and a bunch of other comics that are older and I have no problem spoiling.

I have made it clear, both on Twitter and on this site, I have a particular soft spot for young adult and kid characters in Marvel and DC. It’s a very bad position to have really, since these characters might as well have a giant target painted on them, in particular the children of other superheroes. I’m not even talking about being in danger of supervillains, I’m talking about writers who try to inject pathos in a way that has become such a massive cliche. This week (Jan 20 2016), I read two comics. One of them played the cliche of murdering someone under the age of twenty to motivate the older characters or demonstrate villain threat. The other inverted the cliche completely. These were Marvel Comics’ own “Uncanny X-Men #2” by Cullen Bunn and Greg Land and “Uncanny Inhumans #4” by Charles Soule and Steve McNiven.

Now before I go further, just want to establish a couple of things:

1. This is not an attack on Cullen Bunn. I actually really dig a majority of his work. His “Magneto” series was one of the best X-Men books coming out in recent years, I like what I’ve read of “The 6th Gun” and have heard very stellar things about “Harrow County”. Check them out.

2. Yes, I admit, the mutant in “Uncanny X-Men” we’re going to talk about, Joshua Foley a.k.a. Elixir, is my favorite mutant in the franchise. Now, I know some of you will think that paints argument a bit. I would say that, yes, it does. More so in that it finally motivated me to talk about a long standing problem of writers utilizing cheap deaths to generate pathos.

3. I have been known to… well… poke at the more… “militant” X-Men fans. The ones who declared the sky falling when their book count went from 10 to 6 (and if we’re going to talk entitlement…). The ones who declare anything that Chris Claremont didn’t spit on as “not real X-Men”. And while I oh-so love boiling their piss, I feared that this article may be seen as an extension of that. It’s not. This is a problem rampant in books like Teen Titans and even the Robins.

The premise in the “Uncanny X-Men” relaunch is that Magneto has gathered a team of mutants to fight against the enemies of their now even more endangered race. A group that is willing to cross the lines the more moral X-Men wouldn’t. So yeah, it’s essentially “X-Force” but with a title that will… you know… sell. Now, as the world stands, a cloud of Terrigen Mist has been moving around the world, awakening dormant Inhumans around the world… while also killing or damaging anyone with an X-Gene. Turns out another group is trying to gun down any mutant healers, believing they can protect mutants from the mist. Which brings us to the big event of issue #2, Josh Foley is sniped by one of the Dark Riders (Yes, that’s their names. Comics, everyone.) and is declared dead by the issues end. And this was solely done to establish the villain as “a threat”. How do I know this? Because Cullen Bunn himself confirmed it in a Tumblr Q&A. Now, one could argue that he’s talking about something else because they try to hide the spoiler, but considering what he says in the answer and the events of “UXM #2”, it’s safe to say it’s Josh’s death they’re talking about.

The irony here is that this isn’t the first time this kind of scenario has happened to Elixir. Back in “Death of Wolverine: The Logan Legacy #7”, Elixir appeared to be fatally attacked by another villain that had nothing compelling or interesting about them to create an emotional intensity. To further drive the irony, “Logan Legacy #7” was written by Charles Soule, the guy I’m going to be praising in a little bit.

So now you are about to say: “But Ken. If writers can bring back characters, then why are you complaining?” You are sort of answering your own question. Marvel and DC’s utter disregard for the concept of death as a permanency shoots them in the foot. For if death has no meaning, why would writers use something so meaningless to try and create meaning? The overabundance of deaths in the Big 2 are cheap with little pathos behind them. And it’s not just Elixir’s here. Within the X-Men mythos we had the, in my opinion revolting, explosion of a bus that killed 42 depowered mutant children just after the events of “House of M” (further irony is that during that event, Elixir’s girlfriend, Laurie Collins, was killed by a sniper, just like what happened in “UXM #2”. If that was an intentional callback, then it’s calling back to one of the worst events in modern comics). We have the multitude of teen superheroes in “Teen Titans” over the years being murdered with little depth to the scenes (including the Demon Wonder Dog killing one of the two Wonder Twins. Hoo-Rah.). We had the sickening death of Lian Harper in “Cry For Justice”, the massive amounts of death in “Ultimatum”, the death of the Young Avenger Jonas in “The Children’s Crusade”, the death of Donna Troy’s kid and so many others.

Now, this isn’t to say that no kids or teens should die. That’s insane. For example, the last, in my opinion, death in a Big 2 comic that had a massive emotional impact was the death of Kid Loki in Kieron Gillen’s phenomenal run on “Journey Into Mystery”. And it wasn’t so much that the death, as it was the buildup to it that Gillen had created over his tenure on the book. Every laugh, every triumph and defeat that led up to that inevitability in “Journey Into Mystery #645” is what causes the impact here to such a degree that “Journey Into Mystery” was my comic of 2011. Granted, I believe Gillen diminished it to a degree when he sorta-kinda brought the character back in the follow up “Young Avengers” series, but, as time gets between me and that run, it’s just another thing I wish to forget. Elixir’s death in “Uncanny X-Men”? It’s not even a death in connection to his own personal story. It’s to further the story of other characters. There’s no weight, little build up aside from a comment from Sabertooth. It diminishes the character and his potential.

The first arc of “Uncanny Inhumans” is centered around three characters: Black Bolt, Medusa and their son, Ahura. Basically, before Secret Wars, Black Bolt knew of the Incursions (parallel earth’s colliding, destroying their respective universes) and he knew that there was a very good possibility that they would make it. So, he decides that he has to protect his son. So he makes a deal with one of the biggest villains in Marvel, Kang the Conquerer. If Kang protects Ahura from the Incursions by going back in time, then Kang gets to keep Ahura. And that’s the premise. Then the final incursion happens, then Secret Wars brings it back, and now Black Bolt is coming to get his son back. And I will not lie: My very first thought when this storyline was announced was: “Well, Ahura is going to die by the end of it because that’s what happens to kids, especially the child of superheroes”. The Big 2 have this obsession with keeping their heroes young and children apparently age them too much. It’s silly.

I was completely wrong though… and I couldn’t be happier that I was. By the time we have reached issue #4, Black Bolt, Medusa and their team have come to the point in time where Kang has brought Ahura back to the dawn of Inhuman civilization to help him learn how to control his terrigenesis-bestowed powers. And as the group arrives to take the Prince home, Kang grabs Ahura and is ready to teleport to another timezone and that he’ll never see his parents again. And the end result is… Ahura doesn’t die. Not only does he not die, but he is an active participant in the villain’s downfall. Hell, he is the active participant in Kang’s defeat. Ahura has the power to control his soul. Essentially, he can remove chunks of it and use them as light-hard duplicates or even, as we see here, use them to possess people and bestow subliminal commands. He possess Kang and orders him to leave, repair the timeline and, to quote Ahura: “if you ever feel the urge to harm my people, past or present, before you do… kill yourself.”

In his review on Comic Book Resources, Jim Johnson calls this ending “partially predictable”. With all respect to the guy, I have to massively disagree. Ahura dying in some heroic sacrifice, or Kang killing him in a rage or, as I was guessing, a bunch wibbly-wobbly timey-wimey nonsense would happen to ensure Ahura never existed; those would have been predictable. But this ending shows two things: 1. Ahura is very much his mother’s son. and 2. This shows a willingness on Soule’s part to embrace the whole aspects of this Inhuman group and not to just cut corners. This opens up avenues for stories and character arcs here. To see these relationships expanded upon.

The arc wasn’t perfect by any standards. I still think Soule can be very clunky when he delivers exposition and there was always this feeling of being on a “choke chain”, every time I’d get fully lost in the world, I’d get yanked back. But you have no idea how happy I was to see that younger generation of the Royal Family was not killed off so Marvel could pretend that Black Bolt and Medusa are young. It doesn’t put aside my fears for other characters: I have a Doomsday Clock over Danielle Cage’s head every time I see her.

But this aversion to tired killing offs of young characters shows a commitment to actually wanting to see the story grow. To open possibilities instead of relying on the old. And that’s the other argument people make in regards to these deaths: “Oh so few people cared about that character.” Well, 1. In regards to Elixir, the all whole Academy X generation has an incredibly dedicated fanbase and 2. Why is Marvel not willing to try and grow these fanbases instead of just throwing them away and relying on same old same old? It’s lazy. It’s lazy to throw these characters out instead of properly developing them. And if that means the older characters have to change, or even move on then really so be it. Nothing will change if we just have the same faces over and over.

In the end, I just want some damn effort.