Welcome, citizens, to this week’s installment of Multiver-City One! Every Wednesday we examine the latest offerings from Tharg and the droids over at 2000 AD, the galaxy’s leading producers of Thrill-Power entertainment! Between the weekly “2000 AD” itself, the monthly “Judge Dredd Megazine”, an extensive library of graphic novel collections, and new US-format one-shots and mini-series, they have decades of zarjaz comics for you to enjoy.

There’s a brand-new Prog out this week, so after a quick public service announcement we’ll jump right into the Thrills!

We understand that having such a large selection of comics to choose from can make knowing where to start with 2000 AD seem daunting. What do they publish? Where can I get it? What’s up with Judge Dredd? Can I still read “2000 AD” if I don’t like Judge Dredd?

So to help new & potential readers, we’ve put together An Earthlet’s Guide to 2000 AD. This FAQ collects everything you need to make your initial foray into the 2000 AD Thrill-verse as simple as possible. 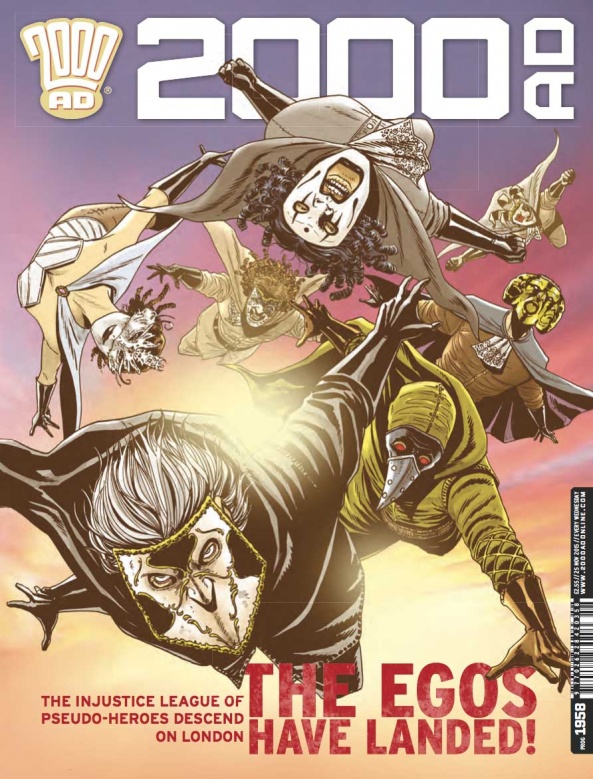 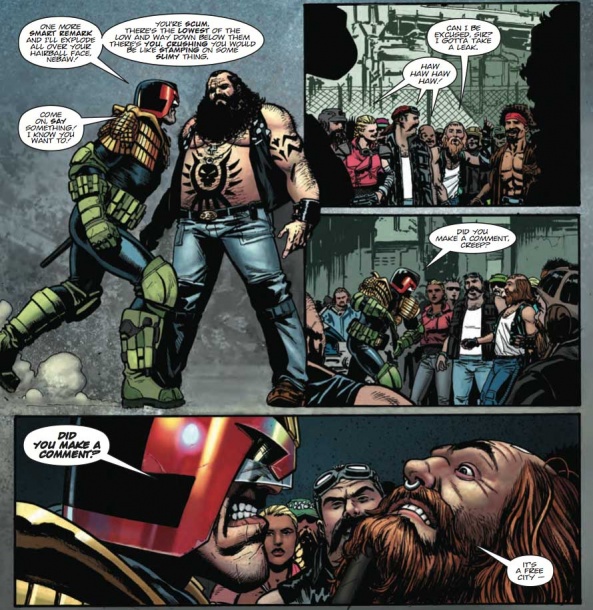 I love learning about offices and divisions within the Justice Department, and this week’s strip kicks off with something I’ve never seen before: The Office of Cooperative Development. Or OCD for short. This department basically deals in catching Mega-City One’s most powerful and influential citizens in compromising positions. Not for rooting out corruption, mind you; instead, the OCD prefers to use the information they gather as leverage when the time is right. It’s like a no-money-down way of owning politicians.

Since the events of Chaos Day, and the ongoing shortage of manpower within the Justice Department, certain branches of operation have needed to be handed off to private firms for management. One such division is the OCD, and that is where we begin our story. It seems that Mega-City One’s most notable lawman was caught on surveillance behaving in a way that the Chief Judge may not approve of. Now, without even knowing it, Dredd has landed square on the radar of the OCD.

I love when John Wagner digs into Justice’s workings. He’s got so much room in this world to play around with how the city operates, weaving together infrastructures and bureaucracies just to see how Dredd would operate in them. The most recent example of this was probably his “Mega-City Confidential” strip from last year.

Now, we all know what Wagner’s capable of, so the fact that this opening chapter has a compelling hook to it should surprise no one. That said, his collaborators on this strip are a lesser known quantity for me. I’ve read Patrick Goddard’s comics before, but I feel like what I’m seeing here is him at his best. How good this comic looks is due in no small part to his colorist Adam Brown. The two of them work really well together, shifting in unison between highly rendered and simpler panels as the story needs it. All in all, I was really impressed with how this strip looks. 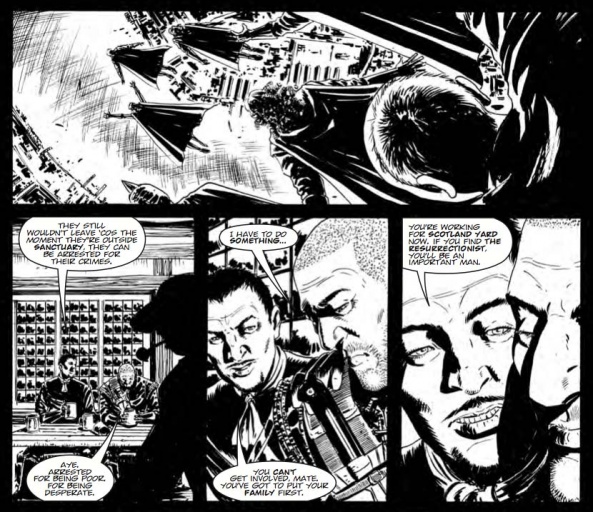 Is it class warfare if only one side can fight back?

We see Defoe reach a point of no return this week. His appointment as a detective for Scotland Yard thanks to his intuitions and expertise in reek tactics has put him on the path to a better life since he retired as a reek hunter. No more chairman (aka taxicab driver) duties, steady pay, prestige and status even above what he’s already achieved; things could not be better. But that view from higher up the social ladder brings with it a better look at what’s happening below, doesn’t it? London’s poor have taken refuge for their ‘crimes’ in the walled-off district of Alsatia, and the Vizards plan to bring them to ‘justice’. And as a leveller, Defoe knows all about the kind of justice the upper class metes out to the lower: swift and merciless. So what’s he going to do about it?

He’s going to go and kick some Vizard ass, that’s what he’s going to do about it. You think Pat Mills is going to write a story where the protagonist doesn’t stand up against super-hero (or superior hero, a great tweak of the term for this setting) abuse of power? The man who wrote “Marshal Law”? Of course Defoe is going to intervene, repercussions be damned!

But enough about Mills; let’s focus on Leigh Gallagher a bit this week. Even just starting with that cover, you feel the menace & dread their appearance brings. They aren’t some clock-punk Justice League, despite what their press in the Intelligencer makes them sound like. One of the visual quirks Gallagher hits with these specific costume designs is that the masks are not skin-fitting, so it’s possible to show the Vizards reaction under the mask, which might be completely different than the one the mask is projecting.

Case in point with the Vizard called Carrion Killer (second row, second from the left on this week’s cover). His mask has a smiling open mouth and we get that grin magnified by his own smile as he sends defenseless men, women, and children to their deaths with his angelic-powered energy blasts. (And just a quick tangent: Gallagher doesn’t just draw their remains as piles of ash; he renders out charred skeletons ‘Days of Future Past’-style to sell the brutality even more.) but when he encounters Defoe and things deviate from the shooting-fish-in-a-barrel game plan, Gallagher uses the look under the mask to work in concert with Mills’ dialogue and track Carrion’s mental state despite the mask never changing: ecstatic, annoyed, defiant, bewildered. Acting through facial expressions is hard enough in comics. Doing it with half a face has to be even tougher, but he pulls it off.

Another nice touch is that as we see the Vizards take skin-piercing damage, Gallagher has light shooting from the wound like Mr. Smith at the end of The Matrix. It’s another visual reminder that these people are infused with angelic power, and one that would probably have been handed off to the colorist in a color comic but gets handled very well here in monochrome by Gallagher. Lots of good stuff here!

Next week: the double-sized fallout! 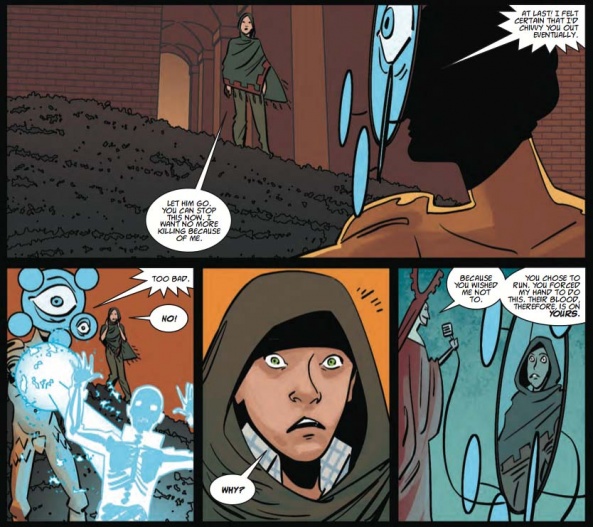 Wren’s mental hosting of the The Key needed to restart the Sun in this clockwork solar system has been a necessary evil, but one that will kill her if she keeps it in her head for too long. See, The Key is essentially iOS 1,000 for our star, and the human brain, as wonderful as it is, just isn’t built to hold that much information for extended periods of time. So with the clock ticking fast, Septimus has come up with a plan that takes The Key out of her head and puts it into a much safer place: the Arthur automaton.

Well, judging by the panels above, ‘safer’ might not be the word to use…

We’ll keep things short this week, as the energy blasts and sledgehammer blows fly fast and furious, but next week is the ‘Motor Head’ finale, so we’ll have more than enough to talk about in our wrap-up then. 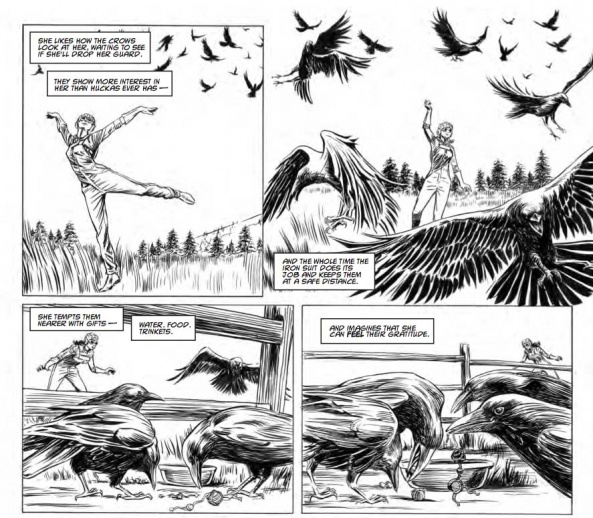 Listen up: in the future, crows will rule the world and there seems to be nothing we can do about it. Well, nothing except wear battery-powered suit.

In this one-and-done tale, David Baille sets out to introduce us to a young lady discontented with her lot in life. An arranged marriage impending, a life spent in an iron, crow-proof suit, and an elderly relative who probably means well are just a little more than I think most of us would be able to handle, but would we go this far to escape it all?

This strip sees the introduction of artist Joshua George, and I must say I’m impressed. His detailed, black & white work feels right at home in the magazine and fits nicely between the other two colorless stories in this issue. There are moments when I can feel a Phil Winslade influence in George’s work, which regular readers will know earns some points with us. I’m looking forward to seeing more work from this artist in the months to come. 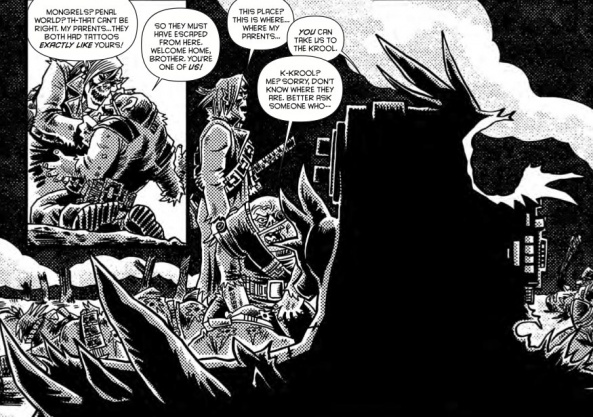 Oh man, the art in this strip gets better every week! The visuals of this comic harkens back to a bygone era in 2000 AD’s history. The black and white, the half-tones, the page layouts and character designs…it’s all here. It even looks like it was printed 30 years ago, with the fabricated variations in the value of the black mimicking the flaws and characteristics of newsprint comics. Week in and week out, Dayglo and McCarthy continue to astound me.

In terms of narrative, this week walks us up to the door. Bad Company have made it to their destination, and it seems as if we may actually get an unmedicated account of what happened in Min town. Next week will see this strip wrap up, so I’d expect something big to go down now that Bad Company is face to face with The Krool!

Going into the Thanksgiving holiday here in Mega-City One, we thought it’d be a good idea to start pointing out some gift ideas for next month’s big gift-giving event (whichever holiday you choose to attach that opportunity to). So here are some non-comics Thrill-Powered items that will warm the hearts of every citizen: 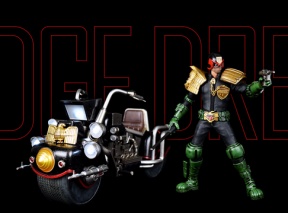 Back in July, around the time of San Diego Comicon, we mentioned that 3A was producing figures based on 2000 AD characters, including Judge Dredd and his Lawmaster. Well, humes, the day to preorder those slices of Thrill-Power is now open you! You can do so at 3A’s web portal starting tomorrow, November 26th. As is the norm with 3A offerings, there are painted and unpainted variant releases for these figures. They also offer both the Dredd and the bike separately and in a bundle (which, let’s be honest, is the way to go if you’re going to go for this). Dredd will run you 65 creds, the Lawmaster 125, and the combo 165. You can check out a gallery of figure images here. 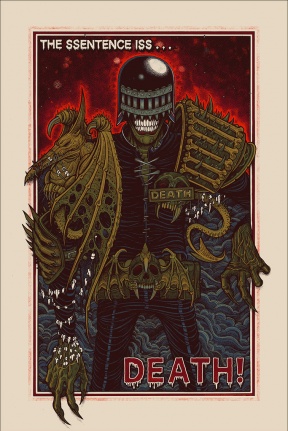 Mondo posters are, by definition, awesome. Mondo and 2000 AD have a bit of a history already, including this DREDD 3D movie poster by Jock that we featured back in January. That association continues with the newest Mondo/2000 AD collaboration: a 24″x36″ print of Judge Death by Florian Bertmer. No need to pre-order this bad boy; he can be yours right now for 45 creds at the link. 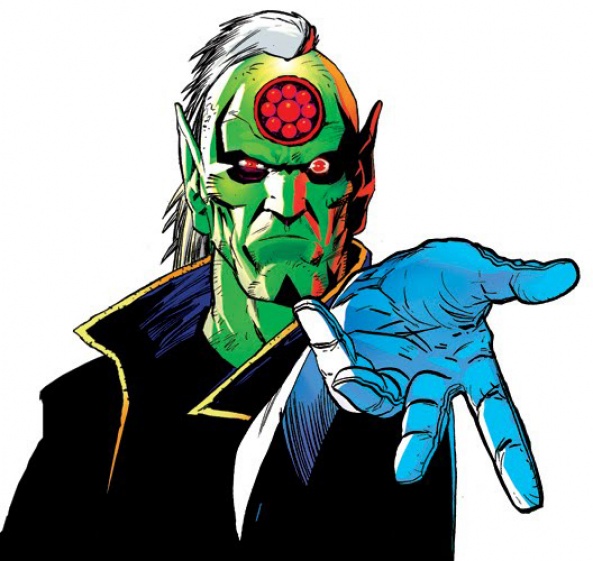